Ghana: Some thoughts on the domestic debt exchange

Ghana's domestic debt exchange (DDE), which was launched on 5 December, is due to expire on Monday (19 December) – details of the offer can be found here. In this note, we set out some thoughts on the DDE and implications for the foreign bonds.

Its success (or otherwise) will be crucial in moving forward with the IMF programme, determining the debt sustainability outlook, and perhaps in shaping the terms on the foreign bonds. But the extent of participation in the DDE is unclear to us, amid suggestions that it has met with some resistance (labour unions for instance have called for pension funds to be exempt, according to reports). That said, there are likely to be punishments ("disincentives") for non-participation.

Indeed, the terms of the DDE seem harsh to us and we wonder if domestic debtholders will resist it or whether there will be sufficient participation for it to be effective. Put bluntly, it seems a bit rich for the government to have gone from saying just six months ago that they don't need an IMF programme to now demanding 50% debt relief.

The DDE involves an exchange out of eligible bonds into a series of new bonds with a lower coupon profile and longer maturities (see here for the terms). There is no principal haircut. While, on the surface, no principal haircut may come as a relief, we think the implied PV reduction from the much lower coupons and lengthy maturity extension is sizeable. 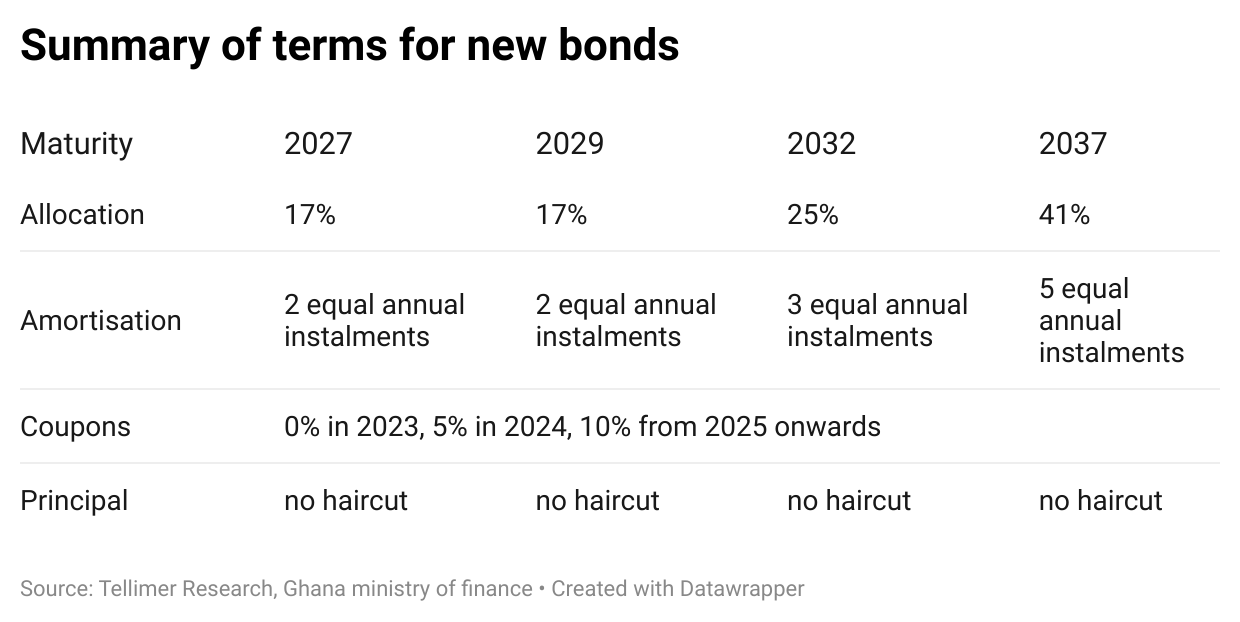 Holders are being asked to exchange eligible bonds into a "strip" of four new amortising bonds maturing in 2027, 2029, 2032, and 2037, in proportions 17%, 17%, 25%, and 41%, respectively. This implies significant maturity extension for most bonds (although a shortening in maturity for holders of 2039 local bonds); that is holders of a shorter maturity aren't being asked to swap into a medium-dated bond, but rather 41% of their new holdings is in bond that matures in 2037!

For each series, there is no coupon payment in 2023, rising to 5% in 2024 and 10% thereafter. For context, the government's budget statement noted that the weighted average interest rate on domestic debt increased stood at c20% at end-September 2022. The first interest payment on each new bond will be made on 30 June 2024 (so that's no interest for 18-months).

The stock of eligible bonds is GHS137.3bn (equivalent to about US$9.8bn at the time the exchange was announced, at a GHS/US$ exchange rate of 14, although cUS$15.3bn now, after the cedi's sharp appreciation in the past few days to GHS/US$9, on Bloomberg prices). There are 69 individual bonds that are eligible in the exchange. 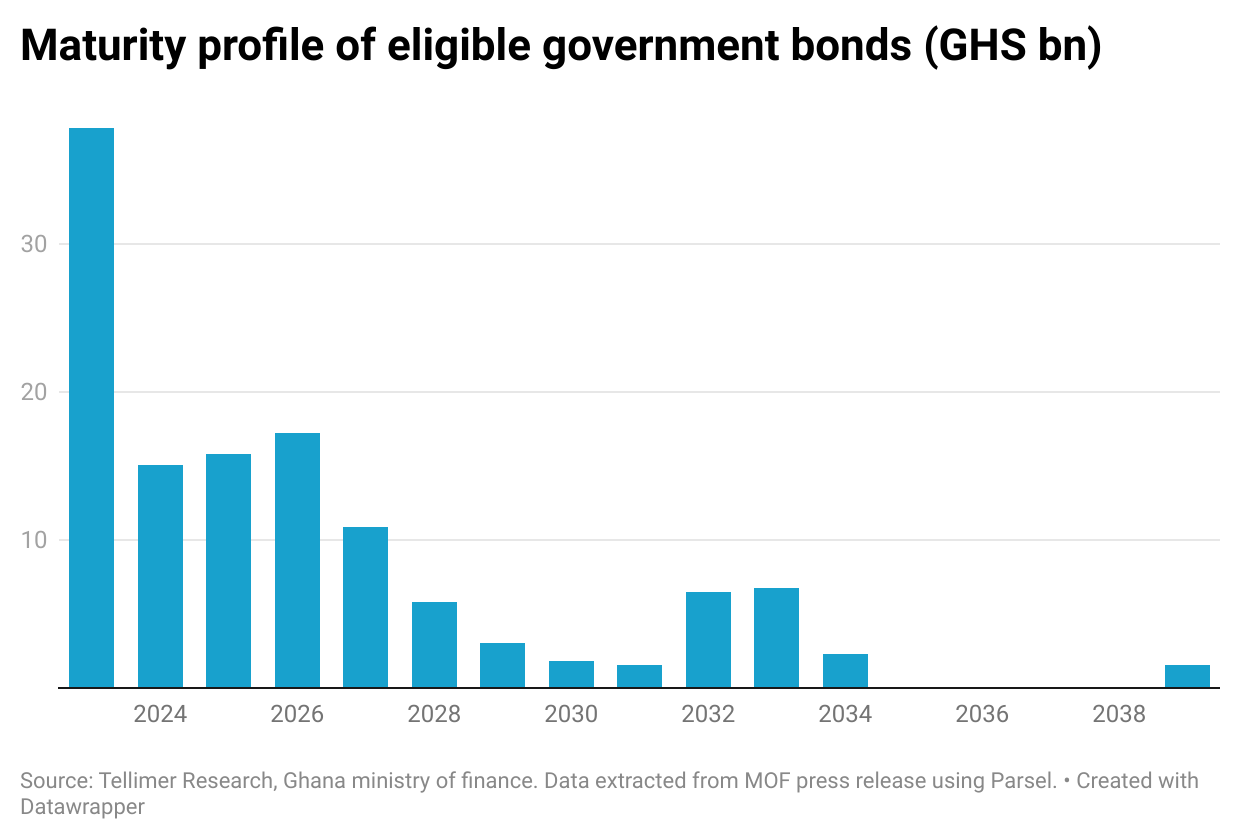 There appears to be no minimum participation threshold at which point the government would reserve the right to cancel it (although one would think you'd want at least 50%, and ideally much more than that) and – unlike in foreign bond contracts – there are no collective action clauses that would bind a minority into accepting the decision of a super-majority.

Low participation, with the government seemingly rushing this through without much prior dialogue with stakeholders, would risk further damage to the government's economic credibility and delay IMF board approval (progress on debt restructuring is a prior action). But Ghana could extend the deadline, and perhaps sweeten the terms, or offer regulatory forbearance, to encourage participation.

Alternatively, it could take a more coercive approach. With the domestic debt under local law, it could just force bondholders into new instruments by changing the law; eg as we've seen elsewhere, it could change the law retrospectively to include collective action clauses in the local bonds ("retro-fit" collective action clauses). Or the authorities could introduce disincentives that reduce the value of the bonds not tendered (local holdouts) or simply rely on moral suasion. However coercion risks some reputational damage.

Such ploys have been seen before. As the IMF have noted in a recent policy paper, sovereign debtors have used the local law advantage as a legal device to restructure their domestic debt, although they point out they should carefully evaluate the potential adverse consequences of this option. They observe creditor participation in domestic debt restructurings can be influenced by carrots (sweeteners) and sticks (for instance, most notoriously, in Barbados and Greece, where high participation was supported by a retrofitted collective action mechanism that required parliamentary approval, or we've seen elsewhere the use of regulatory and tax disincentives, punitive risk weightings, limiting access to central bank emergency financing windows and their use as collateral, that can make old securities untradeable).

Indeed, the government has already said (via a recent FAQ) that holders who do not participate will continue to hold the old bonds but may face "additional regulatory measures" so they cannot benefit from their non-participation. It is not clear to us if the government intends to pay debt service on untendered bonds.

We make some other observations: