We set out our thoughts on Ghana following our discussions with the IMF team at the recent virtual IMF/World Bank Spring Meetings. We would like to thank IMF staff for their time. The views we set out here are our own. We retain our Hold recommendation on the US$ bonds.

Fund relations remain close, ahead of an expected Article IV in the summer. The last Article IV was in December 2019 and the last formal IMF engagement was in April 2020 in the context of the RCF disbursement (which amounted to US$1bn, 100% of quota). Of course, there has been an election since then, with the President re-elected in December but a split parliament.

The economy has held up relatively well during the pandemic. The IMF projects real GDP to rebound this year, with growth of 4.6% – above the regional average – compared with  0.9% last year, and rising to 6.1% in 2022, as per the April WEO. That the country avoided outright recession last year was in part due to the strong growth coming into the crisis (6.5% in 2019) and its diversified exports, which provided some resilience and a natural hedge. The government was also seen as handling the pandemic well, with the second wave now easing and the vaccination campaign one of the most advanced in Sub-Saharan Africa (SSA), supporting expectations for the recovery and a revival in domestic demand.

The IMF projects growth of 5.5% over the medium term, although there remains a question over economic scarring, especially in Ghana’s key hospitality, travel and tourism sectors. Inflation increased after the crisis and remains elevated, recorded at 10.3% yoy in March. The IMF sees inflation falling back to within the target range (8% +/-2ppts) this year, with year-end inflation of 9.8% and 7.5% in 2022, according to the WEO. The central bank has left rates unchanged at 14.5% since a 150bps cut in March 2020.

The impact on the external accounts has been well contained. The current account impact was modest, with the IMF projecting the deficit widening only slightly to 3.3% of GDP in 2020 from 2.8% in 2019, supported by steady remittances and limiting imports. Ghana recorded a trade surplus last year of 3.1% of GDP according to central bank figures, although early indications suggest it is running at a lower rate so far this year. Reserves remain strong, despite the exit of some foreign investors, helped by borrowing (including the RCF disbursement). Gross reserves were US$8.7bn in February, according to central bank data (4.2m of imports), albeit down 13% from a year ago.

But it is all about the fiscal.

Mitigating the economic impact of Covid may have come at the price of a large fiscal cost, amid recurring concerns about debt sustainability – as warned by the IMF in its recent SSA press briefing. The IMF WEO projects public debt to rise above 80% of GDP this year, up from 64% in 2019, and to stay there over the medium term. Meanwhile, public sector gross financing needs (GFN) remain large, which increases refinancing risks, while the interest burden is high (7% of GDP and over 50% of revenue).

There was a sense however that the government’s 2021 budget presented in March showed greater awareness of the fiscal situation and debt vulnerabilities, and the need for fiscal consolidation, with a greater sense of urgency, which marked an improvement on what the authorities presented last summer in the mid-year budget review. This signals a welcome change in tone and was seen as a big, albeit first, step forward.

But, while there might be some optimism about the authorities’ renewed intention, it is not yet clear if it will be enough, and much will depend on implementation. The government envisages new taxes (including VAT and a bank levy) but fiscal consolidation will rely on success at domestic revenue mobilisation, so long Ghana’s Achilles’ heel, and spending cuts. The authorities’ own budget figures imply a c2.5ppts fiscal adjustment this year, based almost entirely on revenue measures, with revenue increasing from 14.3% of GDP in 2020 to 16.7% in 2021. The IMF will want to see more specific measures. We might also be concerned that the pace of fiscal consolidation is a bit slow.

Moreover, in our opinion, Ghana’s homegrown (or go-it-alone) response hasn’t really translated into investor plaudits; the bonds have only seen marginal outperformance of the index (Ghana is down 1.7% YTD compared with -2.8% on the EMBIGD index). Besides obtaining an emergency disbursement from the IMF, Ghana hasn’t taken advantage of other official sector support mechanisms that might be available to it. Although DSSI eligible, it hasn’t participated (initial, well-founded, fears over its credit rating and market access have since been disproved). It hasn’t requested an IMF programme (mind you, nor have many other countries). It will benefit from an SDR allocation, like all IMF members – we estimate Ghana will receive US$1bn to reserves. If seeking more official sector support was seen as a sign of weakness, not doing so hasn’t had the opposite effect. The jury is still out.

But Ghana (B3/B-/B) did come to the market at the end of March to issue US$3.025bn in a four-tranche deal. The sale also included a tender offer for the 2023s. With the operation, and others, Ghana has successfully managed down maturities over the next four years, avoiding the wall of maturities that will hit many other frontier issuers over 2022-24, setting an example to other issuers in the region.

We retain our Hold recommendation on the US$ bonds, with a yield of 7.8% (z-spread 641bps) on the 2032s on a mid-price basis as of cob 16 April on Bloomberg. Yields have risen 60bps this year, although they did reach a peak of 8.5% at the end of March in the wider market selloff, but have eased back since. The bonds are down 5pts YTD, for a total return of -1.3% YTD. 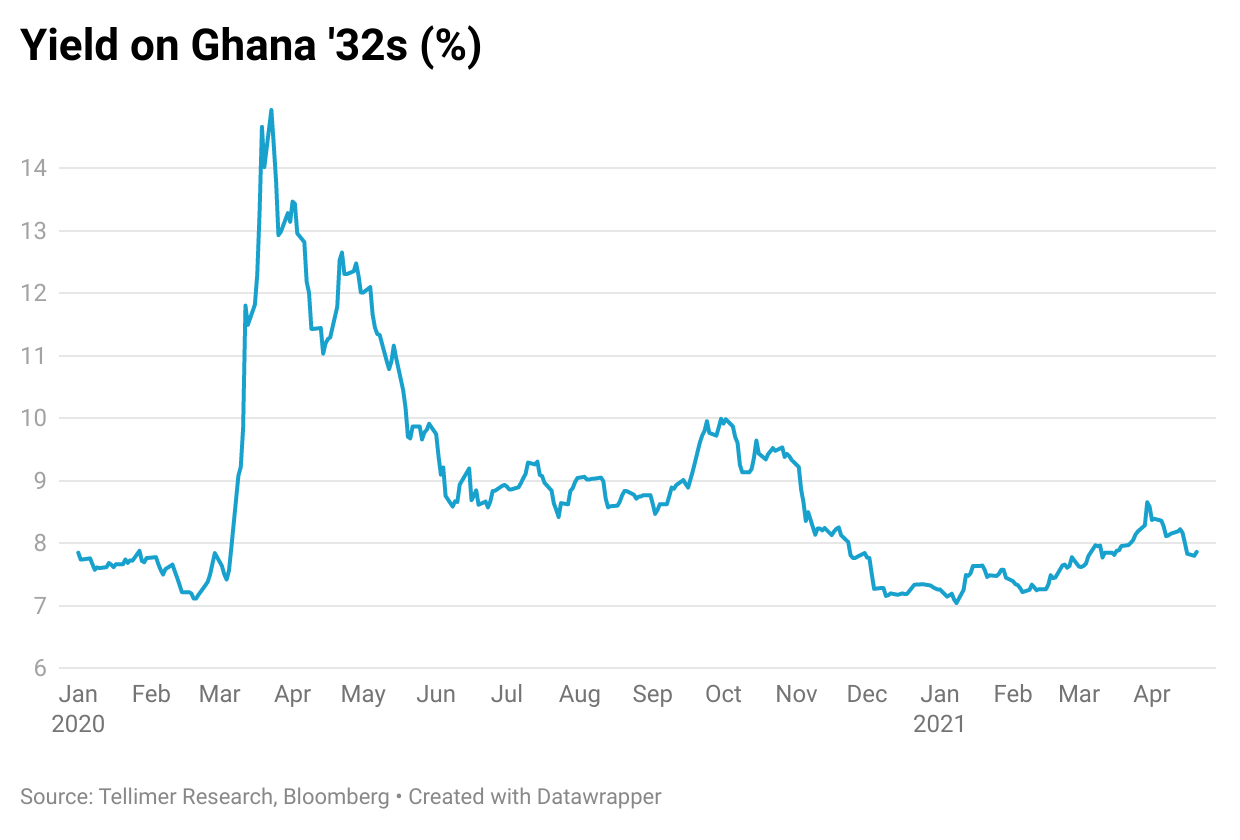