Ghana is expected to hike rates as Cedi continues to weaken

The JPY continued its slide on Monday, rising above ¥119/dlr as funds continued to flow out of the funding currency. It is a function of a weak inflation dynamic that will keep monetary policy ultra-accommodative. It is also an indication that carry trades are back on and that risk appetite has picked up slightly. Carry trades will be considered, and countries with higher interest rates or exposure to commodities might prove more attractive. The USD itself has picked up slightly as the USD index rises back above 98.3, while for now, the EUR and the GBP appear to be in a more consolidative mood, trading at 1.1037 and 1.3150, respectively.

Ghana: The Bank of Ghana is set to deliver its latest verdict on interest rates today. Expectations are that policymakers will raise the central bank’s benchmark interest rate in a bid to halt the decline in the Cedi, which is trading near a record low and rein in broad-based inflation, which is near a 6-year high. The BoG is announcing its decision a week earlier than scheduled in a signal that price pressures may be stronger than expected, and therefore, urgent intervention is required.

Egypt: To fund local wheat purchases as prices surge in the wake of the Ukraine war, Egypt is allocating EGP 36bn ($2.3bn) to finance local wheat purchases. Supply Minister Ali El-Moselhy said that Egypt is seeking to purchase 6mn tons of wheat in the season that starts in April. Wheat stockpiles in Egypt, which relies on exports by Russia and Ukraine, are sufficient for a least three months. International wheat prices have surged almost 40% since the start of the year on the back of supply concerns relating to Russia’s invasion of Ukraine.

Ethiopia: The Finance Ministry on Friday announced that it is suspending the sale of a minority stake in the state-owned telecommunications company. This plan had attracted interest from investors, including Orange SA. The Finance Ministry said in a statement, “given the recent developments and fast-moving changes both globally and from a country perspective, the government of Ethiopia has decided to postpone the privatization process.” The announcement is likely to deal a blow to PM Abiy Ahmed’s much-touted plans to privatize large swathes of the country’s economy to reduce national debt and create jobs. The telecommunications sector was intended to be at the forefront of that project, but the sale of two new licenses and a minority stake in Ethio Telecom has faltered amid uncertainty over regulations and a protracted civil war.

Malawi: As it seeks to obtain an economic program from the International Monetary Fund (IMF), Malawi is in talks with international lenders to restructure as much as $1bn of debt. According to the Finance Minister, the government has started talks with lenders, including the African Export-Import Bank and the Eastern and Southern African Trade and Development Bank, to reorganize its loans. According to the IMF, Malawi owes $757mn to Afreximbank and $145mn to TDB, along with $209mn of arrears, as of December 2020. The Minister noted that talks with Afreximbank and TDB had so far been positive but stopped short of saying how much the government was seeking to restructure with the two lenders, only saying that Malawi’s total public debt was $5.8bn. According to the IMF, Malawi is at high risk of distress and will probably need to revamp some of its borrowings to qualify for a bailout package.

South Africa: A factor often mentioned as a risk to inflation has been the ZAR and the knock-on effect on inflation. Shortly after the SARB introduced inflation targeting in 2002, the correlation between inflation and ZAR lagged nine months was reasonably strong. Since the GlobalFinancial Crisis of 2009, which resulted in a banking and financial crisis that stunted growth in money supply and credit extension, things changed. Since the financial crisis, growth in the credit cycle as reflected in the bottom half of the chart moderated to growth rates roughly half of what they used to be. So long as growth in money supply remains weak, the knock-on of ZAR behaviour into inflation will remain muted. It is for this reason investors can feel comfortable that any ZAR driven inflation will be relatively weak and will not be the main driver of inflation that will force the SARB to act with as much conviction as the Federal Reserve.

A large contributor to hard currency inflows into Uganda is coffee exports, given that the country is Africa’s second-biggest producer after Ethiopia. It is therefore worth looking at the latest coffee export numbers. Monthly data released by the Uganda Coffee Development Authority (UCDA) showed that coffee exports in February 2022 plunged 20% compared to shipments from the same period a year ago. According to the UCDA, the decline in exports was mainly on account of low yields of robusta, the coffee variety that Uganda predominantly cultivates due to the drought in some regions of the country. Note last month, Uganda blamed its withdrawal from an International Coffee Organisation (ICO) agreement on what it said are unfair tariffs and other barriers that restrict the export of processed coffee to Europe and elsewhere. 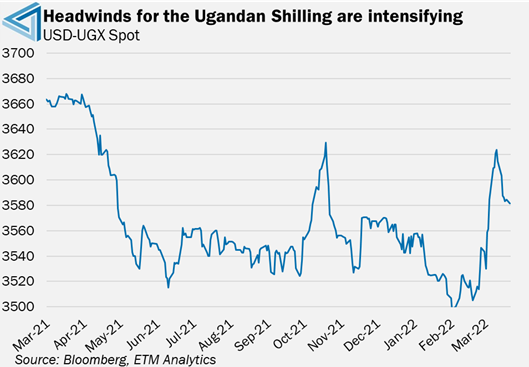 The decline in exports is likely to weigh on Uganda’s dollar inflows and present further headwinds to the Uganda shilling, which has started the year on the back foot against the USD. The local currency is down by 0.75% on a year-to-date basis. Much of the weakness in the UGX has resulted from subdued global risk appetite given the developments in Ukraine and has seen foreign investors rotate out of emerging and frontier market bonds. Moreover, the UGX has lost some ground, undercut by dollar demand from fuel importers.

Going forward, several headwinds for the UGX remain in the near term. These include tightening monetary conditions as the Federal Reserve hikes rates and the traditional dividends season in April.

According to a study conducted by the Green Finance and Development Centre at Fudan University in Shanghai, the world’s poorest developing nations will pay China and its lenders nearly $14bn in debt servicing costs this year. Total debt costs meanwhile are expected to sit at $52.8bn for this year. The report revealed that more than a quarter of that will go to China, which is one of the largest lenders to developing nations.

At the end of 2020, the 68 nations included in the study owed more than $110bn to various Chinese lenders in official bilateral debt. This means that China was the second-largest lender to developing nations, following the World Bank’s International Development Association. The study showed that the repayment costs to official Chinese lenders will exceed 2% of GDP in eight of the countries included in the study. Angola was highlighted as the worst off, with the country owing nearly 5% of its GDP to China.

Given that China is one of the largest creditors of highly indebted developing nations, the country has come under pressure to provide debt restructuring for several of these countries that are in a position of fiscal distress. It is worth noting that the Chinese government said in late 2020 that it had suspended servicing debt requirements on more than $2bn in debt under the global effort to help provide fiscal relief for the world’s poorest and most indebted nations. Moreover, Bloomberg reported that Chinese lenders had suspended $5.7bn in repayments as of late last year.

In Africa, Zambia, Angola, and Ethiopia are some of the most indebted countries on the continent and are most in need of fiscal reprieve. Concerns over Ghana’s and Kenya’s debt sustainability have also risen sharply, and this is reflected by the increased fiscal premium priced into the sovereign bonds of these two countries. Whether we see China provide some more fiscal relief for these countries remains to be seen. Unless there is another round of fiscal relief, fiscal risks in the five countries mentioned above are expected to remain elevated. That said, it is worth noting that Angola is making some notable headway in terms of its reforms. This comes on the back of windfall oil revenues, which are helping to support the country’s fiscus.

Oil has rallied this morning as we kick off the new week, with the Brent front-month contract back above $110 per barrel now as the war between Russia and Ukraine intensifies. Prices have also been supported by attacks in Saudi Arabia, with Iranian-backed rebels drone-striking energy facilities to ratchet up tensions in the middle-east. With this adding to supply concerns, the volatility within the market looks set to remain entrenched for now. 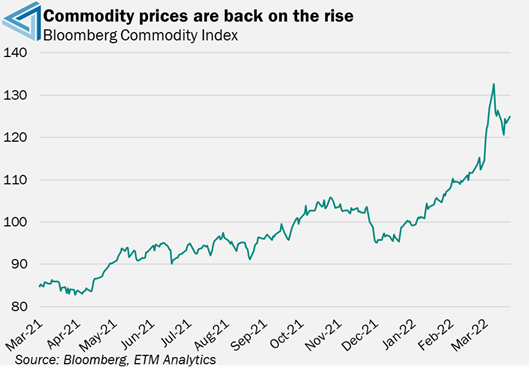 Looking at metals, the price of bullion is climbing this morning after dropping 3.4% last week following the US Federal Reserve’s decision to hike rates and pencil in a steady increase in the coming quarters. Gold has held up well though, with the metal’s geopolitical and inflation hedge characteristics underpinning the metal more broadly. Spot gold is currently trading at $1927.97/0z at the time of writing with bias favouring more topside gains. Palladium is once again the outperformer when it comes to the noble group. The metal is currently trading 3.1% up on the session at $2565.00/oz while platinum is marked 0.9% higher at the time of writing. Supply fears driving the price action at present.

Aluminium is back in the spotlight this morning after Australia banned the export of alumina and aluminium ores including bauxite to Russia. Reuters reported - "Russia relies on Australia for nearly 20 percent of its alumina needs," the Australian government said in a joint statement from several ministries, including the prime Minister's office. It added that the move will limit Russia's capacity to produce aluminium, which is a critical export for Russia. "The Government will work closely with exporters and peak bodies that will be affected by the ban to find new and expand existing markets," the statement said.