Ghana presented its much-anticipated mid-year budget review yesterday (see speech here and full text here, available via local media), delayed from earlier this month after the authorities announced their intention to seek an IMF programme. However, as we noted before, although it is another milestone, we struggled to see what it could usefully add after barely three weeks of talks with the Fund.

It comes as the original budget already shows signs of rapidly going off track. Provisional data for the first six months of the year shows a higher deficit than programmed, 5.6% of GDP versus a target of 3.9%, driven (unsurprisingly, in our view) by significant revenue shortfalls, although there has also been a 'faster execution' of spending; and this is a wider deviation from target than we saw in the first quarter.

At first sight, the lower deficit target may therefore be what investors and the IMF want to hear, signalling a greater fiscal effort than previously planned, and – importantly – suggesting the authorities finally understand the situation (after a number of missed opportunities before). Crucially, investors may also be hopeful that the narrower deficit takes Ghana a step closer towards restoring debt sustainability without the need for restructuring the bonds; ie private sector involvement (PSI). That is, if the budget is feasible and credible, of course.

However, it is not that straightforward and we caution against reading too much into the lower deficit target. We make three observations:

We calculate nominal GDP, in local currency terms, is 18% higher than used in the original budget; which is understandable given the increase in inflation since then. CPI inflation is now running at 30% yoy (in June) compared with 12.6% at end-2021 (we note changes in Ghana’s GDP deflator have historically tracked annual CPI inflation quite closely). Moreover, compared with the 2021 estimated out-turn, nominal GDP is 29% higher. With the lower real GDP growth now being forecast for this year in the mid-year budget review, at 3.7%, down from 5.8% previously, as a result of policy tightening, this implies average inflation at c24%. 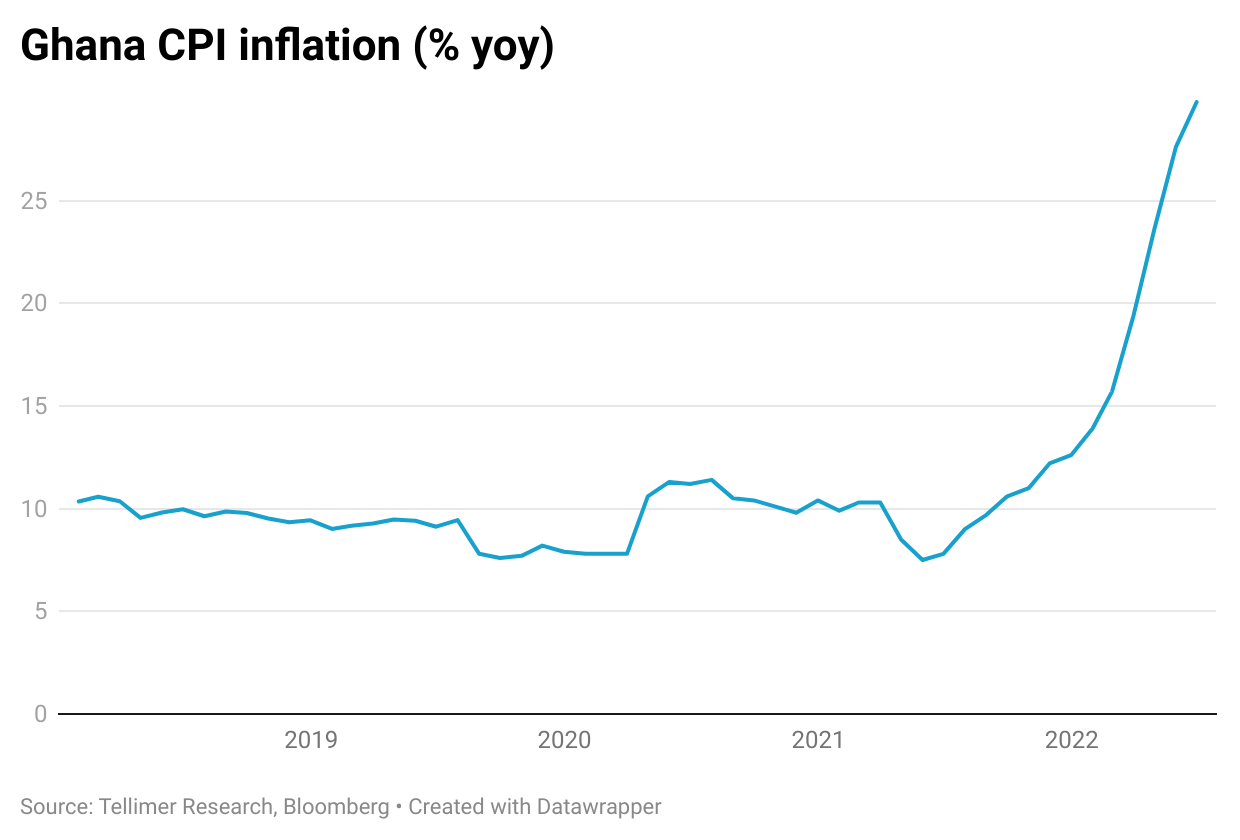 On the other hand, in local currency terms, revenue is projected at 3.7% lower than in the original budget projections. Although this is still enough to see revenue fall from 20% of GDP to 16.4% (due to higher GDP), we note that even after the downward revision – which reflects continuing revenue underperformance – revenue is still 38% higher than in 2021. Most of this is now coming from higher inflation (inflation tax) rather than improved revenue collection and tax policy decisions, although the authorities have also increased the budget oil price from US$61.2 per barrel to US$94.8 per barrel and hope to implement the digitalisation of VAT collection (eVAT) in Q4. Full implementation of the E-levy commenced on 1 July.

Meanwhile, spending is just 1.3% lower than in the original budget and, despite the sharp fall as a share of GDP (from 27.4% to 22.9%), investors may be disappointed that spending is not being cut by more in cash terms. And this is including the implementation of the 30% discretionary expenditure cuts announced earlier this year. Despite that, however, public sector pay has been revised up by 6% in cash terms (but falling as a share of GDP from 7.1% of GDP in the original budget estimate to 6.4%) as a result of a 15% cost of living allowance agreed with the unions.

Hence, it is too soon to hang the flags out and we think much still rides on the IMF assessment and its own DSA. Moreover, inflation is not a viable fiscal strategy over the medium term.

Meanwhile, the Bank of Ghana left its policy rate unchanged yesterday, at 19%, confounding expectations of further tightening (the Bloomberg consensus was a 100bps increase to 20%). The central bank opted to remain on hold to allow time to assess the impact of recent rate hikes, after 450bps in cumulative tightening already this year, perhaps also with an eye on growth.

We maintain our Buy on GHANA '32s at a price of US$46.4 (yield 22.4%) as of cob 25 July on Bloomberg (mid-price basis). This follows our upgrade to Buy from Hold on 9 June after prices fell in line with even our more pessimistic estimates of recovery values (see here and here), while our positive view has been reinforced by the authorities' surprise request to seek IMF help. However, there are still some unknowns that could weigh on investor sentiment. 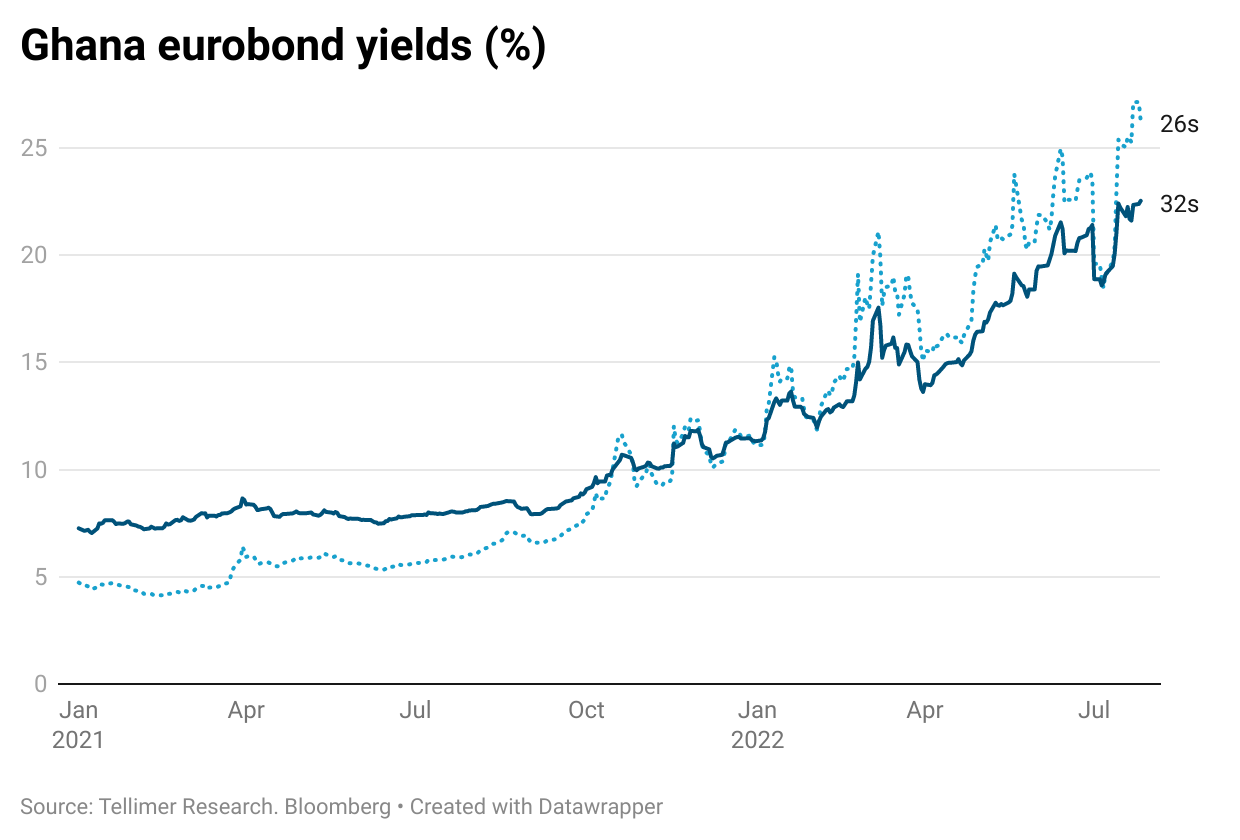