The IMF issued a statement on 7 October following the conclusion of its recent staff visit to continue programme discussions. The statement contained no surprises, but nor would we have expected it to.

Discussions will continue in coming weeks, including during the upcoming Annual Meetings, along with technical work. This will include making further progress on assessing Ghana’s debt sustainability.

However, there were no details or clues as to what the Fund is thinking. Nor would we expect there to be at this still early stage, perhaps to the disappointment of investors, and despite the IMF Managing Director's recent optimistic comments about timing, in which she said a deal with Ghana should be finalised by the end of this year.

The IMF statement came after the Bank of Ghana hiked rates by another 250bps to 24.5% at its MPC meeting on 6 October (re-arranged from September), presumably with the endorsement of the Fund (or at least in the knowledge of it), as CPI inflation jumped to 33.9% yoy in August. It followed a 300bps increase at the MPC's emergency meeting in August and brings the cumulative increase to 1100bps since this tightening cycle began last September.

The central bank's press release noted that regarding the fiscal situation, expenditures had been broadly on target, while – unsurprisingly – revenue performance had been below expectations.

Perhaps more revealing than the rate hike itself was the data reported by the central bank, which showed the severity of the deterioration in the liquidity situation (the August MPC press release did not provide the usual amount of data while the July release had reserves to June).

Gross reserves fell to US$6.6bn in September, down by over US$1bn (-15%) since end-June and by 38% from a year ago. Meanwhile, net reserves (a better measure of underlying reserves) were US$2.7bn in September, down by US$0.9bn (-25%) since end-June and by 63% from a year ago, their lowest level in seven years. Gross reserves were 2.9 months of import cover (compared to 3.4 months in June and 4.3 months in December), according to the central bank, which implies net reserves of just five weeks on our calculations. No wonder then, the call to the IMF for financial support. 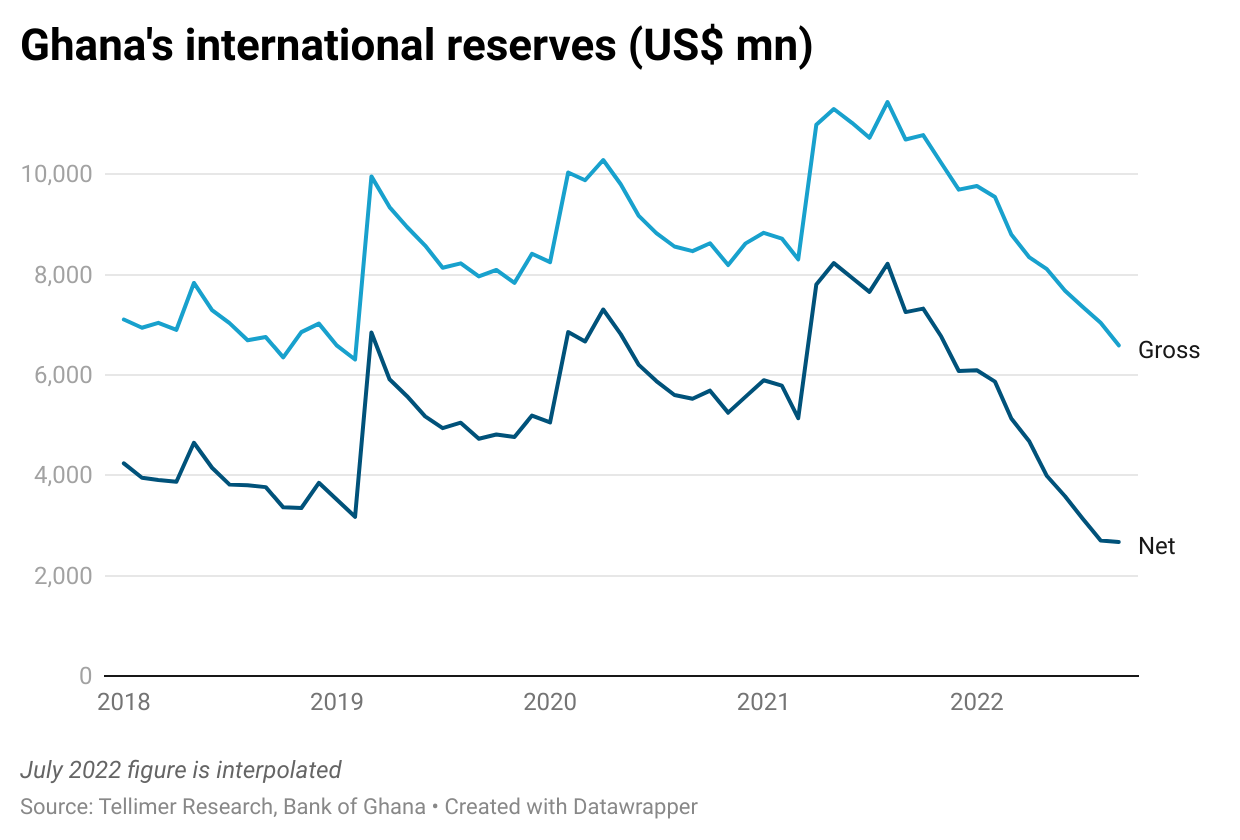 Moreover, and in the absence of the updated IMF DSA, this all comes at the same time a World Bank report projected Ghana's public debt will jump to 104.6% of GDP this year, up from 76.6% in 2021, due to a wider government deficit, "massive" weakening of the cedi, and rising debt service costs (see Africa Pulse, October 2022). The Bank of Ghana meanwhile put public debt at 68% of GDP in July.

The outlook for debt sustainability seems to be poor. Ghana was already assessed to be at high risk of debt distress in the IMF's 2021 Article IV (July 2021) and it is hard not to see it being in a worse position now. This would point towards debt being unsustainable, which implies restructuring under IMF lending rules. But whether this is on external debt or domestic debt, or both, is unclear. They both account for a roughly even share of the stock of total public debt (PED 36% of GDP, PDD 32% of GDP, based on BOG data for July, although domestic debt is being inflated away), but it is interest that is the killer and domestic debt accounts for a much larger share of debt service (around three quarters of the 7% of GDP interest bill).

Or rather, when we say the outlook is poor, at least the starting point is now much worse than it was. Whether this means a restructuring is required to restore debt sustainability may still be moot. A credible multi-year fiscal consolidation plan could work and obviate the need for a (costly) restructuring (and default). Moreover, there may be some reluctance in the official sector to force Ghana, the poster child of frontier Africa bond issuance in 2007, into restructuring – with potential spillovers across the region. However, it is not clear that a large and strong enough fiscal adjustment on its own exists, and if it does, if it is politically acceptable and if it will work (and much will also depend on the assumptions – although the real exchange rate, even after the cedi's collapse, could begin to appreciate under a credible IMF-backed programme, helping the debt dynamics). Hence, restructuring may be inevitable.

And, if there needs to be a restructuring, there may be some in the official sector that want to see bailing-in foreign bondholders, especially after its criticism the private sector didn't do it's bit in DSSI, while – politically – the optics may suggest it would be difficult for the government to let domestic investors take the hit and leave foreign investors alone (despite arguments about reputation and market access).

Ghana was set to start restructuring talks on its local debt, according to reports on 20 September (perhaps with similarities to Jamaica's domestic debt exchange in 2013), which might have been seen as positive by foreign bondholders, although the dollar bonds have fallen anyway; but in any case, such talk may seem premature ahead of the IMF's DSA.

We maintain our Buy on GHANA '32s at a price of US$38.6 (yield 26.8%) as of cob 7 October on Bloomberg (mid-price basis). The bonds, however, continue to fall and are admittedly lower than at the time of our last affirmation, US$43.5 on 9 September, and the time of our upgrade, Ghana: Bond collapse opens value opportunity amid risks on 9 June (US$51.6) – and even the '26s are now below US$50 (after hitting US$80 when Ghana requested IMF help) – but we think prices are well below expected recovery values in plausible restructuring scenarios. 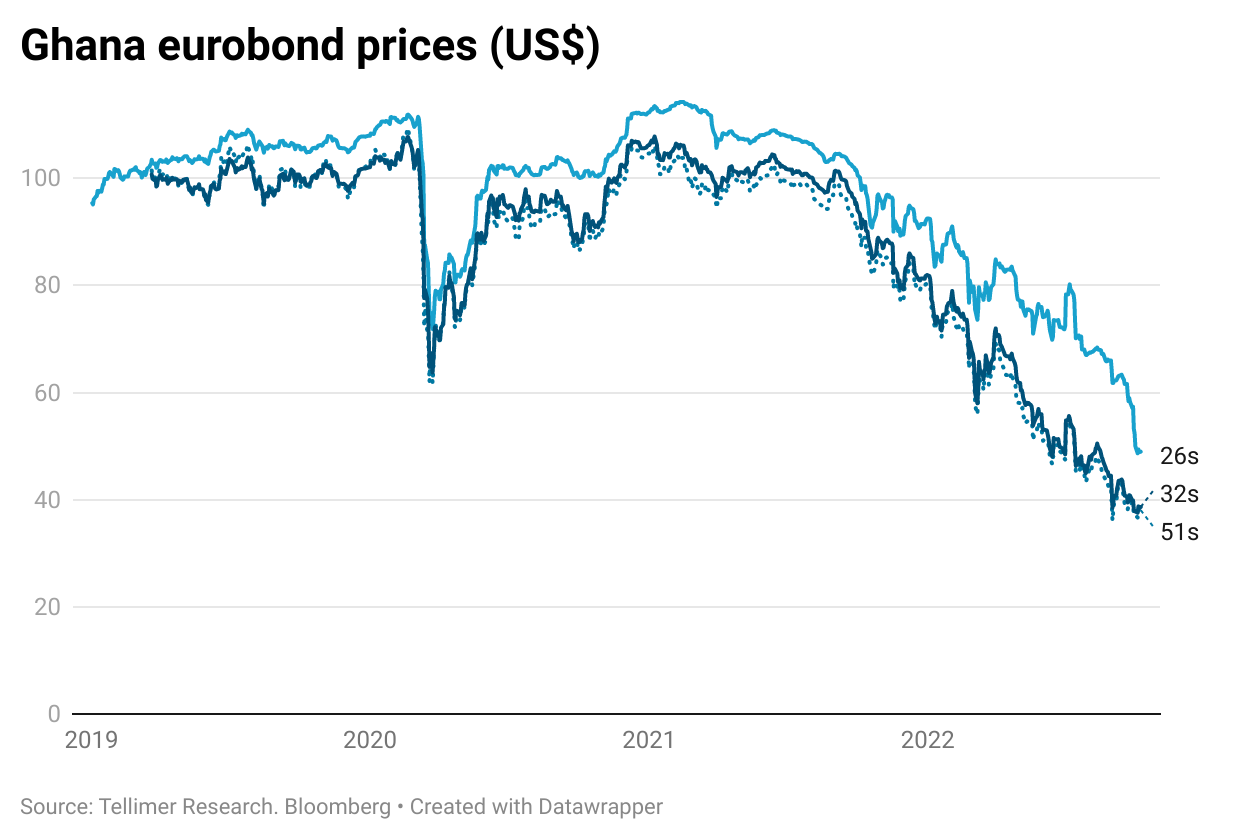