The IMF announced yesterday it had reached staff-level agreement on a new three year Extended Credit Facility (ECF) for Ghana (see here for the Fund's accompanying FAQ). The programme is for an amount of US$3bn (304% of quota). It follows the conclusion of a staff visit over 1-13 December and previous rounds of discussions since the authorities' programme request in July.

Crucially, as we might have expected, receiving the necessary financing assurances and sufficient progress on debt restructuring (but, we observe, not necessarily completion) is a prior action for Board approval of the programme. No time frame is given for when the programme might go to the Board.

As is now well known, the government has already announced its intention to restructure both its domestic debt and foreign bonds. Details on the foreign bonds are still vague while the domestic debt exchange (DDE), the terms of which seem harsh to us, is set to expire on 19 December.

Still, the IMF agreement is quicker than we had expected, although we concede it is in line with the IMF MD's comments in September when she said a deal with Ghana should be finalised by the end of this year. We thought that sounded optimistic. We suspect the government's recent acceptance that it needed to seek debt restructuring, as it announced in its 2023 Budget last month, as a quid pro quo for an IMF programme (given debt is now unsustainable), will have unlocked progress. Otherwise, private sector involvement (PSI) would have been a major stumbling block to progress.

Curiously though, as we've observed before, there is no mention in the IMF statement that Ghana's restructuring is being done in the context of the Common Framework. Likewise with Malawi recently, too. Having said that, Ghana’s Finance Minister was reported yesterday saying that they would consider the Common Framework but suggesting some reluctance because of the slow speed and difficulties so far (we didn’t know it was "optional"). But still, has the IMF just quietly killed the Common Framework?

The IMF statement says that the programme aims to restore macroeconomic stability and debt sustainability while laying the foundation for stronger and more inclusive growth, and preserving financial stability.

Key reforms aim to ensure the sustainability of public finances while protecting the vulnerable. It notes that the fiscal consolidation strategy relies on frontloaded measures to increase domestic resource mobilisation and streamline expenditure, as well as structural fiscal reforms. We observe that revenue underperformance has always been an issue in the past for Ghana, and it is not clear to us why this time around will be any different.

In addition, the programme includes measures to reduce inflation and rebuild external buffers, and envisages wide-ranging reforms to address structural weaknesses and enhance resilience to shocks.

However we await more specifics on the programme modalities, conditionality and structural benchmarks, and – crucially for bondholders – the Fund's updated debt sustainability analysis (DSA).

The announcement of staff-level agreement is positive news, in terms of a step forward (Ghana bonds rose 2.5-3.0pts across the curve yesterday), but it has been anticipated – even if it's sooner than we thought – and doesn't really change things. Restructuring was already in the offing. Bondholders will want to see programme details and the DSA now.

Despite the restructuring, we still see value in Ghana's foreign bonds, with estimated recovery values in the low-40s/mid-50s under our assumptions, although there is still uncertainty about this, and even with the staff-level agreement, bondholders negotiations could take time. 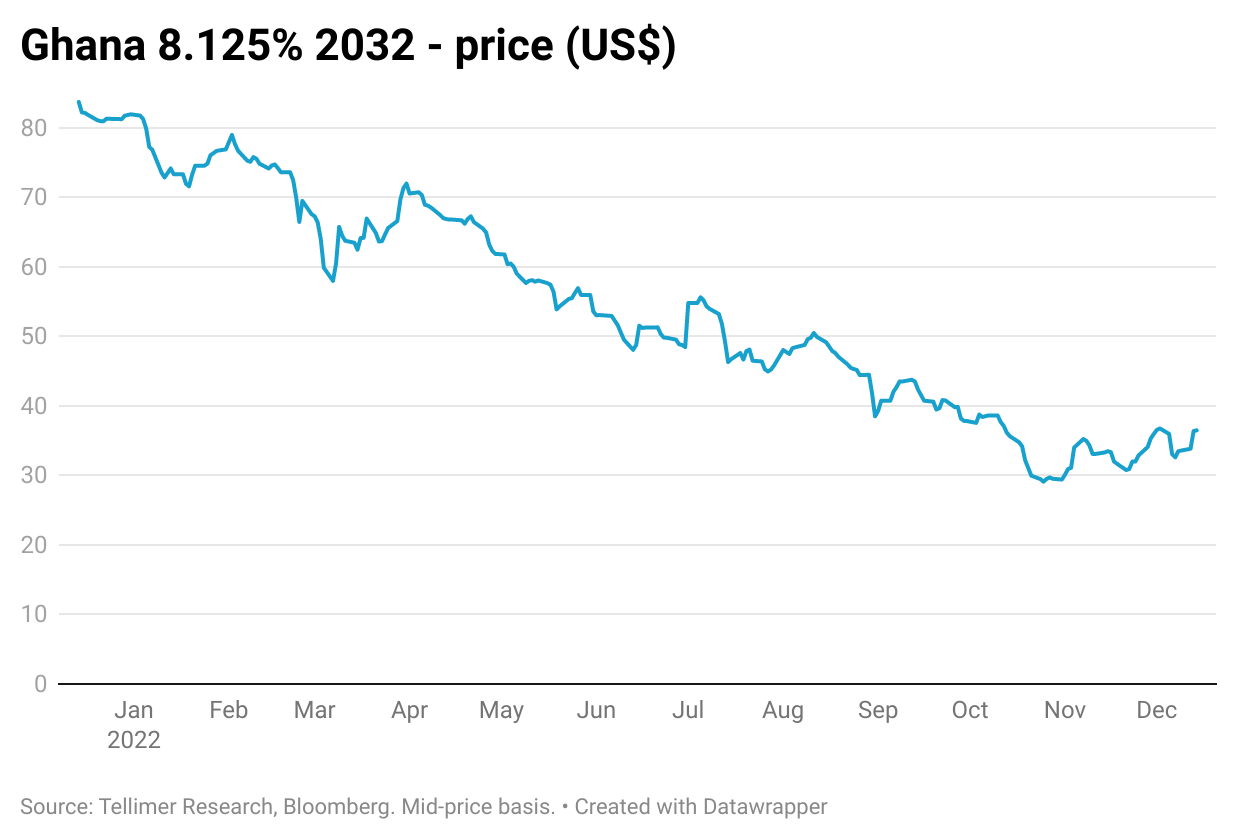