Ghana hikes rates by 200bps, focus shifts to the Central Bank of Nigeria

Expectations are for the Fed to raise its benchmark rate to 2% in August which for the most part is now priced into global markets, the risk is however if they do more. This would certainly raise recession risks in the US and elevate the status of gold as a safe-haven asset, however, this is not guaranteed as gold is sold off in times of trouble to meet margin calls and losses in other asset classes.

The price of copper has slipped this morning with the benchmark contract down 0.7% on the session thus far. Demand worries remain the predominant driver at present with the ongoing lockdowns in China expected to temper economic dynamism even further. News on the wires is that Beijing has extended its work-from-home requirements while the commerce centre, Shanghai has deployed more testing and curbs to underpin its strategy of “zero-COVID” status.

Nigeria: The Central Bank of Nigeria will become the latest African central bank to decide on its policy rate today. Policymakers are likely to maintain their stance of only changing borrowing costs once the economy’s recovery is on a sustainable path. That should see them leave the benchmark interest rate steady for a 10th straight meeting, even as inflation has been ticking up this year. Supply-side disruptions, partly due to Russia’s invasion of Ukraine, and surging diesel costs, are placing upward price pressures on the economy. They are also hindering its recovery, as are security challenges in its northern food-growing regions and persistent oil production troubles. That said, the risk is that the central bank hikes rates today.

Kenya: The Central Bank of Kenya has issued a prospectus inviting bids for a KES 75bn 18-year infrastructure bond. The amortized bond will be issued to fund infrastructure projects in the 2021-22 budget estimates. The coupon rate will be market-determined, and the minimum amount is KES 100,000. Bids close at 2pm on the 7th of June, and the auction will be on the following day. The bond will be listed on the Nairobi Securities Exchange.

Nigeria: Economic growth in Nigeria remains weak, judging by the latest data. Specifically, economic growth slowed for the third straight quarter in Q1. GDP growth came in at 3.11% in the three months through March, compared with 3.98% in the fourth quarter of 2021. Non-oil sectors such as financials, communication, trade, and healthcare were among the fastest growing. However, oil refining, crude petroleum and natural gas, road transport, quarrying, and other minerals were lagging. The continued slowdown in economic growth may persuade the CBN to continue its current policy stance. Governor Emefiele has repeatedly said that the bank won’t raise rates until it’s satisfied that the economic recovery from a pandemic-induced contraction in 2020 is sustained, even as inflation accelerates.

Uganda: President Yoweri Museveni has warned that offering subsidies or removing levies on key Ugandan imports such as fuel and wheat could deplete foreign reserves and reduce tax revenue. According to Museveni, in a year, the government would lose UGX 2.68trn ($734mn) if taxes on gasoline and diesel were suspended and UGX 520bn from duty-free wheat. Such steps would spike consumption of these products and strain Uganda’s $4.5bn foreign-exchange reserves. Note that gasoline prices in Uganda have surged by about 20% since November, while the costs of essential commodities are up due to global supply disruptions caused by the war in Ukraine. Museveni added that reducing taxes on locally produced commodities, including sugar and milk, is also out of the question because revenue has to be protected. Finally, Museveni said that the country remains susceptible to vagaries of global fuel supply until its own production begins in 2025, followed by refining in the following year.

Zimbabwe: Finance Minister Mthuli Ncube has noted that the government is using gold and platinum resources to access credit lines from abroad as the country crippled with $13bn of debt is ineligible to borrow from international financial institutions. Ncube was quoted as saying, “We have some structures where we are able to access credit lines from abroad and certain banks using our gold. The gold is supporting access to those credit lines that we can borrow and support projects. We also have some credit lines that are supported by platinum.” However, the minister stopped short of providing details on the identity of the lenders.

Botswana: The political landscape remains charged at present with both the previous President Ian Khama and the administration under the current President Mokgweetsi Masisi blaming each other for tarnishing the image of the country. It has become a game of passing the buck so to speak with both sides attacking the other side’s integrity in open forums. For now, the fallout from investors has been negligible, however, the political backdrop in sub-Saharan Africa has always been fluid and thus investors will be keeping an eye on developments.

After closing out 2021 as Africa’s fourth-best performing African currency against the USD, the Ugandan Shilling has come under some pressure in 2022. The UGX has lost almost 3% against the USD and is ranked 15th out of 22 countries in Bloomberg’s Africa FX basket. The currency has weakened on the back of factors such as the negative impact of the war in Ukraine and increased demand for hard currency from the energy sector and food-importing firms. Yesterday the UGX closed on the defensive amid dollar demand pressures from both players in the interbank market and merchandise importers. 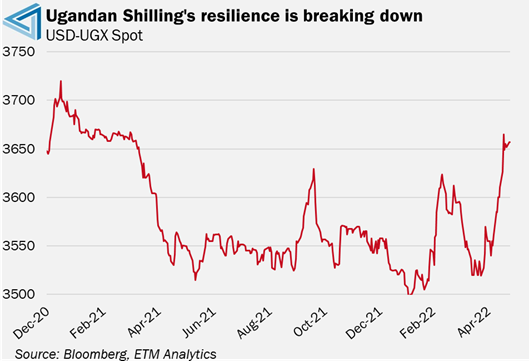 Another factor that has detracted from the UGX’s resilience has been a persisting trade deficit. Data released by Uganda’s Finance Ministry yesterday showed that the current trade deficit widened 6% m/m to $256mn in March. The widening of the deficit was largely attributed to a bigger increase in the import bill which more than offset the increase in the export receipts over the same period. Specifically, inbound shipments rose by 8.5% to $634.98mn in March because of higher oil and non-oil formal private sector imports. Exports, meanwhile, rose by 10% to $369.39mn in March on the back of increases for both coffee and non-coffee formal exports.

While the UGX is expected to find support from central bank intervention this week, we see room for further weakness in the UGX in the coming months as it remains deeply overvalued on a real effective exchange rate basis. Headwinds such as the faster pace of normalization on monetary policy by the Federal Reserve, a rising debt pile, and a persisting current account are detracting from the UGX’s resilience. The IMF recently said that greater exchange rate flexibility is needed to help absorb external shocks and preserve external buffers in Uganda.

Fixed Income: Is the tide turning for emerging market assets?

Building on yesterday’s comment, questions are being asked whether the tide is turning for emerging markets given the value on offer following the $5trn rout. Emerging market stocks have plunged below their long term average valuations, while bond yields have broken above a range that has been in place since the ’08 GFC. Meanwhile, spreads on hard currency emerging market bonds have surged to distressed levels, reflecting the hawkish shift in global monetary policy and deterioration in global risk appetite. 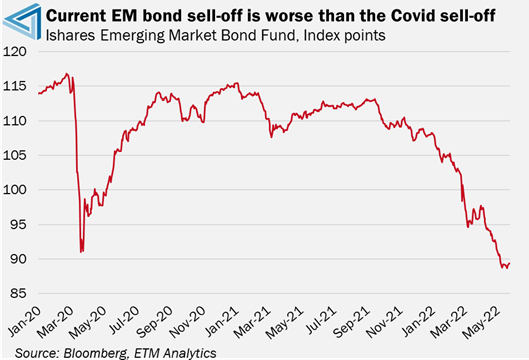 Following the sustained sell-off in emerging market assets, valuations across emerging markets are becoming increasingly attractive. This has presented a buying opportunity for some fund managers who are willing to take on the added risk. That said, it is important to highlight that the buying has been gradual, with fund managers still trading in a very cautious manner given the risk of a deeper rout in emerging markets should the Fed turn more hawkish or growth concerns in China intensify.

Bloomberg data shows that the MSCI Emerging Mark Equity Index has lost $4trn since its peak in early 2021, while Bloomberg emerging market local and hard currency bond indices have lost around $500bn each since their recent highs. The spread between emerging market sovereign dollar bonds over US Treasuries is hovering just below the 500bps mark, a level that triggered a turnaround in emerging market bonds in 2015.

In conclusion, while the fundamental backdrop remains gloomy amid tightening global monetary policy, soaring inflation, heightened geopolitical tensions, mounting growth risks and the ongoing war in Ukraine, the attractive valuation on offer, together with the improved technical backdrop, has resulted in improved risk-reward conditions for emerging market investors.

Macroeconomic: In line with expectations, the Bank of Ghana delivers a 200bps rate hike

The Bank of Ghana delivered another bold policy move yesterday as it tries to rein in soaring inflation expectations and restore stability in the currency. Conforming to expectations, the Bank of Ghana’s Monetary Policy Committee voted in favour of a 200bps rate hike, taking the benchmark interest rate to 19.00%. Yesterday’s move follows on from a 250bps move previously. The aggressive tightening from the  Bank of Ghana comes amid soaring inflation with consumer price growth reaching a near two-decade high of 23.6% y/y in April. 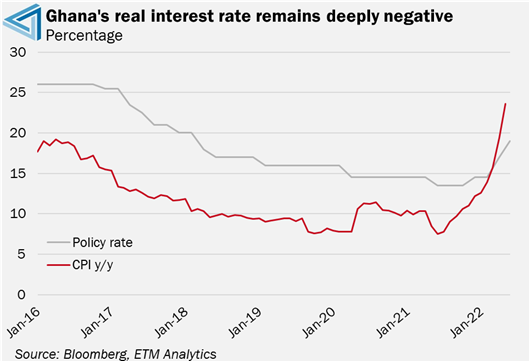 In the post-decision press conference, Governor Ernest Addison said that “the committee took the view that it needed to decisively address the current inflationary pressures to re-anchor expectations and help foster macroeconomic stability.” Note that capital outflows have completely offset a $1.3bn trade surplus driven by soaring crude oil export revenues in the first quarter. Governor Addison said that the massive capital outflows had resulted in a current account deficit of $934.5mn in the first quarter compared with $429.9mn in the same period last year.

The current account deficit helps explain the significant sell-off in the Ghanaian Cedi this year, which has contributed to the spike in headline inflation. While currency weakness has compounded inflation pressures, much of Ghana’s inflation has been driven by soaring fuel and food prices. Moreover, it is worth noting that inflation is widespread with 96% of surveyed items rising in April.

While the bold rate hike should help rein in inflation expectations, it has made it harder for the government to service its debt. Debt servicing costs will jump reflecting the higher interest rates. This will compound the government’s already precarious fiscal position and further raise the risk of the country slipping into a position of fiscal distress.