The real deluge of data will be released tomorrow, but the overriding theme will be one of an improving economy that will gather momentum. Overall, the data is expected to reflect an economic upswing that will support the USD bulls to help consolidate their recent gains. Core to the appreciation will be the weakness of the EUR amid fresh lockdowns and the anticipated disparity in monetary policy positions between the US and its major trading partners.

In the commodity space, the most noteworthy developments out of Asia this morning has been the spike in the price of Shanghai zinc following gains of 3.36% seen in the 3m LME contract yesterday. The reason for the rise in prices has been the potential for Glencore to place its zinc sulphide operations in Italy on hold for maintenance. Reuters reported that Glencore said the zinc plant in Portovesme, with a capacity of 100,000 tonnes a year, will be put on care and maintenance until there is "a meaningful change in power market prices." The price of copper is flat in Asia going into the EU open following gains of 0.83% to close at $9726.50/tonne overnight. This comes as the International Copper Study Group (ICSG released its report showing that the market had a 52 000 tonne surplus in August versus a 39 000 tonne deficit in July.

Nigeria: The Central Bank of Nigeria is set to deliver its rate verdict today. Slowing inflation suggests that there is room for the CBN to leave its key rate steady for a seventh straight meeting and continue to support an economy that’s struggling to recover from its most significant contraction in three decades in 2020. That said, given Fed tapering and inflation well above the upper band of the CBN’s inflation target, the risk of a rate hike cannot be ruled out.

Ghana: Data from the Bank of Ghana (BoG) showed that gross reserves at the end of October stood at $10.8bn, equivalent to 4.9 months of import cover. This compares with the reserve level of $8.6bn, representing 4.0 months of import cover at the end of December 2020. According to the BoG, the strong reserve position provided some buffers for the local currency despite pressures in the third quarter due to strong foreign exchange demand from the corporate sector, importers, and offshore investors.

Kenya: In a move to increase vaccination rates before the year-end holiday season, Kenya will require people seeking government services to be fully vaccinated against COVID-19 from December 21. According to the Health Secretary, the government will restrict in-person services at the revenue, transport, ports, immigration, and education agencies. Furthermore, the state will also limit access to hospitals, prisons, game parks, as well as hotels, bars, restaurants, and businesses that attend to 50 people or more in a day. Note President Kenyatta is targeting at least 10mn out of around 53mn people to be vaccinated before year-end as part of plans to support the economy’s recovery. While cases have dropped with the positivity rate ranging from 0.8% to 2.6% over the past two weeks, the government is, however, wary of new spikes over the Christmas season next month and as political gatherings increase ahead of next year’s general elections.

Nigeria: M2 money supply in Nigeria edged marginally higher to 15.80% y/y in October from an upwardly revised 15.70% y/y in September. Meanwhile, PSCE growth surged to 18.60% y/y in October from 14.10% y/y. This was the fastest pace of PSCE since August 2020 and marked the third straight month it has risen. The continued recovery in private sector credit suggests that business and household appetite for borrowing may be picking up after uncertainty surrounding the coronavirus pandemic and weak demand had to a large extent limited appetite.

Uganda: State-run Uganda Coffee Development Authority data showed that coffee exports rose 14% y/y in October, aided by favourable weather and maturing plantations. In October, the first month of the 2021-22 season, shipments rose to 486,534 60-kg bags, up from the 427,993 bags exported in the same month last year. Rising coffee exports have boosted foreign currency inflows into the country, which partly underpinned the Ugandan Shilling’s resilience this year.

Zambia: Data from the Chamber of mines showed that copper production fell to 593,500 metric tons in the nine months through September 30, from 623,815 tons in the same period last year. While production fell, the industry is optimistic that the new changes to the mining tax regime announced by Finance Minister Situmbeko Musokotwane in his 2022 national budget will help spur production after they take effect. The Zambian government made mining royalties deductible from income tax in the 2022 budget in a move to boost foreign investment into the country. Finance Minister Situmbeko wants the industry to more than double production over five years to further underpin economic growth prospects.

Forex: Kenyan Shilling plunges to a fresh low as its losing streak continues

The start of the week provided no relief for the Kenyan Shilling (KES), with the USD-KES closing at a fresh high, marking the 9th straight day of losses and the longest streak of daily losses in three months. The nine-day losing streak extended the year-to-date drop to 2.80%. Since the start of the month, the KES has been under pressure with dollar inflows from key exports like tea and horticulture offset by high demand for foreign currency for oil, machinery, and capital equipment exports. 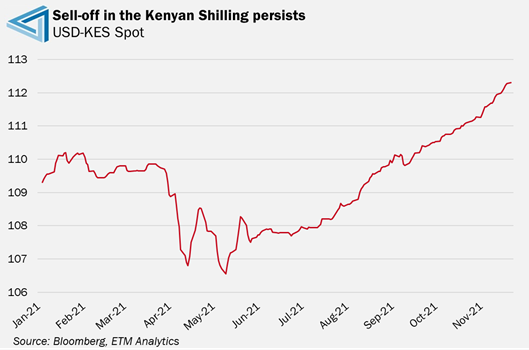 Despite the Central Bank of Kenya's (CBK) intervention, the KES continues to weaken. Last week, Kenya's foreign reserves fell $222mn as the CBK released dollars in the market to help the local currency. Specifically, the CBK, in its weekly update, reported that reserves fell from $9.09bn, an equivalent of 5.56 months of import cover, to $8.87bn or 5.42 months of import cover. Despite the decline in dollar reserves, the bank said the current level of reserves is adequate.

The bearish bias on the KES is expected to persist this week as a strong appetite for dollars from across all sectors continues to outstrip limited supplies. This is expected to further drive Kenya's debt service costs which are already forecast to surge by 22% this fiscal year. According to the parliament's budget office, Kenya's Treasury expects to spend a record KES 1.17trn ($10.4bn in the year through June) on loan repayments, equivalent to about two-thirds of its revenue. Treasury last week reported that Kenya's debt repayments jumped by a fifth to KES 781bn on account of the local unit's depreciation.

It was a downbeat start to the week for bond markets after US President Joe Biden announced the renomination of Jerome Powell as the head of the Federal Reserve, sparking bets that the central bank will tighten policy at a relatively fast pace. Shortly after the announcement, traders priced in a full 25bps rate hike into the June 2022 FOMC meeting and brought forward subsequent rate hikes.

While Jerome Powell was favoured to remain at the helm of the Fed, there was a possibility that Fed Governor Lael Brainard would be selected as the head of the Fed, which was viewed by the market as a far more dovish choice. That said, President Biden decided to make Brainard Vice-Chair of the Fed. The outcome of President Biden’s decision led to a broad-based sell-off in bonds. 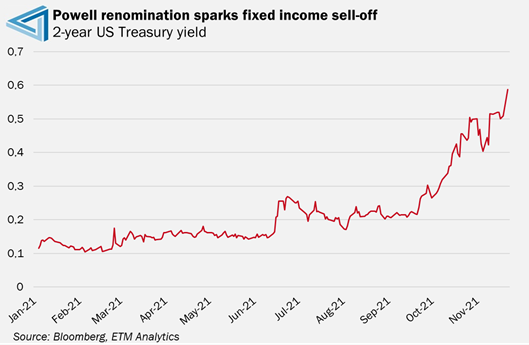 For context, yields across the US Treasury curve traded kicked higher yesterday with the 2yr and 10yr yields for instance both climbing 8bps to 0.59% and 1.63%, respectively. The sell-off in US Treasuries prompted a broad sell-off in emerging market bonds amid expectations for a faster pace of monetary policy tightening in the US. Note that the JP Morgan EMBI Global Total Return Index and the AFMI Bloomberg ex SA Index, which we use to gauge the performance of emerging market and African bonds, both ended the session lower yesterday.

In conclusion, the renomination of Powell as the Chair of the Fed has increased bets that the Fed will speed up the pace of tapering and move forward the timing of its first-rate hike. Recall that the Fed last week began winding up its bond purchasing program by decreasing the quantity of assets being bought. Looking ahead, while we do see a strong possibility that the Fed will conclude its asset purchase tapering by mid-2022, we remain of the view that the Fed is unlikely to hike rates until the latter part of 2022, given that there are still a number of downside risks to the economic outlook.

Macroeconomic: Bank of Ghana is the latest African central bank to hike rates

While consensus expectations were for the Bank of Ghana to leave rates on hold, given the significant rise in inflation and fiscal risks and persistent weakness in the currency, there was always a notable risk that the central bank hiked rates. In what we view as a prudent move, the Bank of Ghana’s Monetary Policy Committee voted in favour of hiking its benchmark interest rate by 100bps to 14.5%. Note that this marks the first time that the BoG has hiked rates in 6 years. 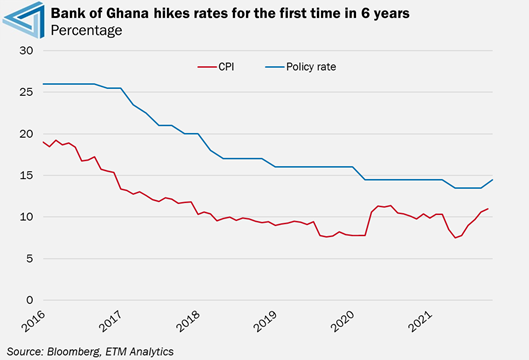 Yesterday’s move to hike rates unwinds some of the 250bps worth of rate hikes during the COVID-19 era and comes as inflation soared to a 15-month high of 11% in October. Headline inflation remained buoyed above the central bank’s inflation target range of 6% to 10% for a second consecutive month in October. The MPC said in its policy statement that “these elevated inflationary risks require prompt policy action to re-anchor inflation expectations to safeguard the central bank’s price stability objective.”

While the Ghanaian Cedi extended its losses yesterday, mainly due to a sharp rise in the US dollar, currency traders will welcome the move to hike rates. The 100bps rate hike shows traders that the central bank is committed to its primary goal of achieving price stability. Going forward, while the rate hike is encouraging from a currency perspective, the balance of risks for the GHS remain decisively negative. Therefore, we caution investors from turning bullish on the GHS just yet.