Ghana feels the brunt of the credit rating agencies

It was a more consolidatory session for global bonds on Wednesday as the market seemed to stabilise following the volatility experienced on Tuesday. US Treasury yields dipped marginally lower on the session while we saw some mixed trading for gilts and bunds, albeit with the moves marginal. Price action was initially a bit choppy still, but things settled down as the BoJ’s shock move from Tuesday was digested. Focus can now turn to the final data releases of the week, which include the latest update to GDP for the US, as well as durable goods orders and consumer confidence.

Egypt: The Central Bank of Egypt will meet today for the final time this year to decide on the interest rates. Policymakers at the CBE are expected to vote in favour of raising interest rates further to combat inflation following the sharp devaluation in the pound. A significant hike would help to curb inflation and make the carry trade attractive.

Democratic Republic of Congo: The International Monetary Fund will disburse $203mn to help boost the DRC's foreign reserves after a "satisfactory" third review of its $1.5bn loan agreement. The IMF forecast the economy to grow 6.6% in 2022, supported by higher-than-projected mining production. According to the lender, prospects for economic growth remain "favourable" for 2023. However, the ongoing conflict in the eastern region is placing pressure on the budget and remains a risk for the economy. The lender meanwhile forecasts inflation to exceed 12% in December due to higher global food and fuel prices.

Kenya: The International Monetary Fund has forecast inflation in Kenya to peak in Q1 2023 and then gradually move back within the central bank's target band of 2.5%  to 7.5% on lower food prices. Inflation is projected to peak around 10% y/y in early 2023. The lender recommended "further tightening of monetary policy" to anchor inflation expectations.

Kenya: Treasury has cut its economic growth forecast for 2022 to 5.3% from 5.5% earlier. Meanwhile,  growth in 2023 is seen as decelerating to 5.1% "on the back of a global slowdown, monetary policy tightening, and a drag from continued fiscal consolidation." The agricultural sector is expected to recover on the forecast of normal rainfall in 2023, with normalization in tourism and continued strong diaspora remittances providing additional support.

Uganda: The International Monetary Fund and Uganda reached a staff-level agreement on economic policies to conclude the combined second and third reviews of the 36-month Extended Credit Facility- finance program. Uganda will have access to SDR 180.5mn, about $240mn, in financing once the review is formally completed by IMF Executive Board in the coming weeks. This would bring the total IMF financial support under the ECF-financed program to SDR 451.25mn (equivalent to around $625mn). In a statement, the IMF said authorities continue implementing their reform program with key policy actions focusing on prudent fiscal and monetary policies.

Zambia: Amid delays on the debt restructuring, the World Bank announced that it is releasing $100mn for Zambia on Wednesday. The $100mn concessional loan to Zambia aims to support reforms to restore fiscal and debt sustainability and promote private sector-led growth. In a statement, World Bank President David Malpass said that "Zambia urgently needs debt relief to restore medium-term debt sustainability and attract the new investment needed for growth and jobs." Malpass added that he remains "deeply concerned by the slow pace of the creditors' committee and the impact of the delays on growth and poverty." The statement added that Zambia has continued to implement agreed structural policies to achieve macroeconomic stability even as its official bilateral creditors delay discussing and finalizing debt treatment for the country under the G20's Common Framework. Zambia has been struggling to strike a deal with a diverse group of creditors ranging from holders of the country's $3bn in Eurobonds to Chinese lenders that account for about one-third of its public external liabilities of more than $17bn.

Oil: Oil rallied again yesterday, with Brent surging to $82.60 per barrel while WTI neared the $80 handle as US inventories declined sharply last week. The EIA reported yesterday that US stockpiles of crude declined by more than 5.9mn barrels last week, taking inventories to lows not seen since 2014. Even with such a decline in stockpiles, yesterday’s gains for oil looked slightly exaggerated, likely a result of thin trading volumes. The weekly volume of WTI futures traded has dropped to its lowest this year, suggesting that volatility could persist into the end of the year. Traders seem reluctant owing to the myriad of factors affecting the market at the moment, including Europe’s ban on Russian crude, China’s uncertain economic outlook, the impending recession in the US, and OPEC’s promises to continue to support the market.

The International Monetary Fund, in a statement after approving a $447 loan to Kenya, has forecast Kenya’s foreign exchange reserves to fall further in 2023. The lender cited high borrowing costs limiting access to global credit markets as the driver of the decline. While Kenya’s foreign reserves are expected to fall next year, the lender expects them to remain adequate. 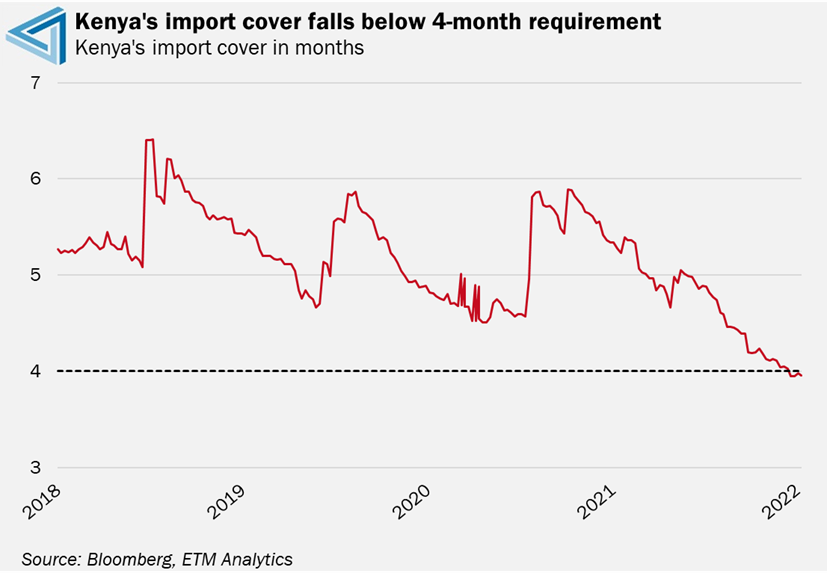 Ghana is starting to feel the repercussions of freezing its debt payments as global credit rating agencies and investors weigh in. Following the government’s announcement on Monday that it will suspend service payments of its Eurobonds, commercial loans and most bilateral loans, S&P Global Ratings lowered its long- and short-term foreign currency sovereign issuer credit ratings on Ghana to SD/SD from CC/C. S&P highlighted in its credit rating update that Ghana’s credit rating reflects shallow net reserves, a volatile exchange rate, high inflation, and a weakened economy. 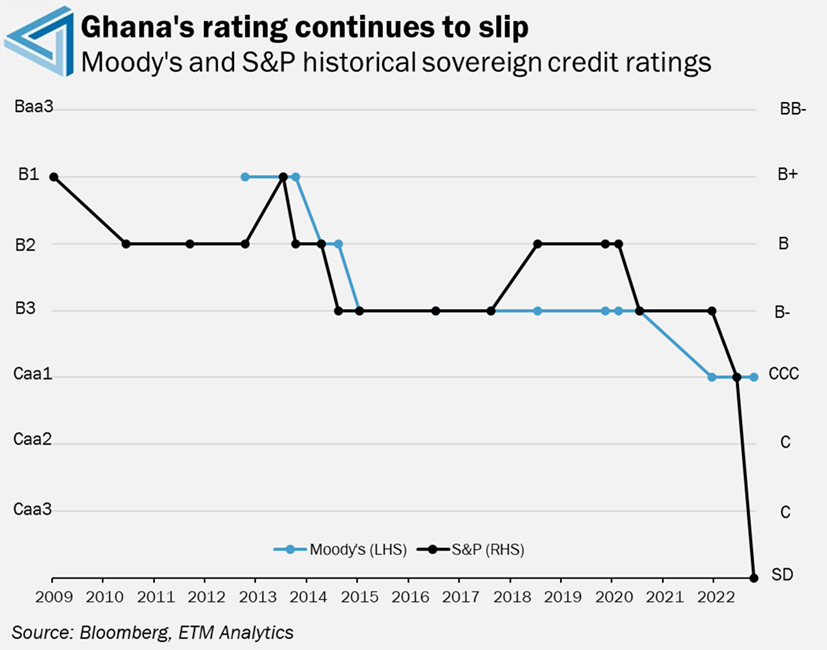 Macroeconomic: Falling inflation expectations have led to a readjustment in interest rate bets

While we expect central banks to remain hawkish in the first months of 2023, there is abundant evidence that inflation will moderate next year. This has resulted in a significant repricing in interest rates bets, particularly in the US. The US Fed funds futures market is pricing in the end of the current rate hiking cycle mid-way through next year. 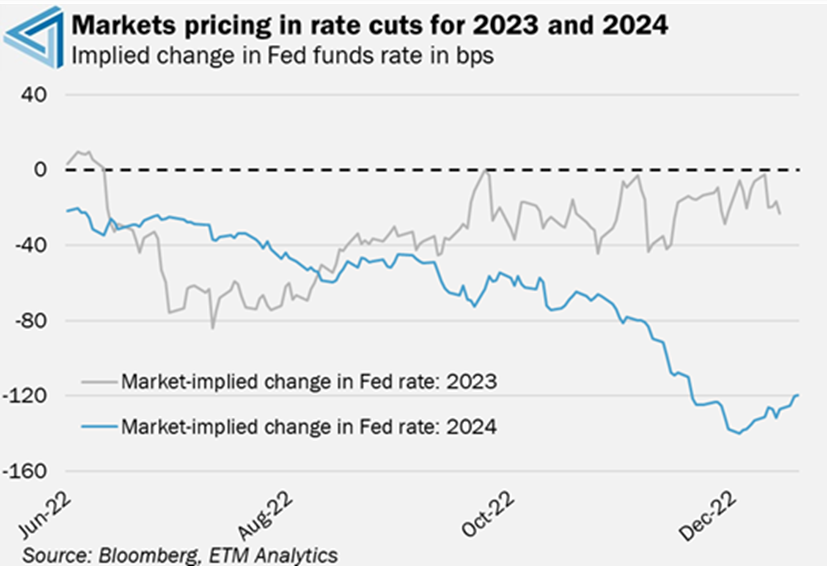