US Treasury futures are marginally bid this morning following yesterday’s declines. The market was pressured yesterday by high levels of corporate issuance and gains in equities, while weakness in European bond markets added some additional pressure. JGBs and Australian bonds are declining this morning, while those Asian equity markets that are open are gaining. Focus for the day ahead will be the US PMIs, and any softness in the numbers could see a rebound for the UST market and drive yields lower, as that would corroborate the case for the Fed dialling back its pace of rate hikes even further.

In Europe, ECB speakers have continued with their hawkish chorus, signalling that more outsized rate hikes are coming. Consumer sentiment figures, meanwhile, came in at their highest since last year February, supporting the case for further rate hikes. This suggests that European bonds could remain under some pressure through the sessions ahead

Nigeria: The Central Bank of Nigeria (CBN) is set to meet for the first time this year to decide on its policy rate.  Although inflation moderated in December, it remains significantly elevated, and we, therefore, expect policymakers to vote in favour of tightening monetary policy further.  However, after hiking by five percentage points since May, the CBN is likely to implement smaller rate hikes, given the build-up of pressures in the local economy and risks of over-tightening.

Egypt: Reports citing Planning Minister Hala Elsaid indicate that Egypt has secured $1.5bn funding from the International Islamic Trade Finance Corp (ITFC) this year. The “integrated financing solutions” are part of a program to support Egypt’s economy amid the continuing fallout from the coronavirus pandemic and Russia’s invasion of Ukraine. Egypt first signed a deal with ITFC in 2018 and renewed it in 2022 for another five years, with the credit line doubled from $3bn to $6bn.

Ghana: The Bank of Ghana, Ghana Cocoa Board (COCOBOD), and the commercial banks have agreed to allow banks to use COCOBOD’s deposits/placements at the banks to cater for retail customers who may not want a rollover of their cocoa bills.  This comes after the BoG initially directed banks not to pay customers their maturing cocoa bills investments, following cash flow challenges facing COCOBOD.  In a statement, the BoG said it expects that the short-term cash flow challenges facing COCOBOD will be resolved soon to enable the cocoa regulator to meet its obligations to investors.  The BoG also reported that its bid to roll over cocoa bills failed at the latest auction.  Specifically, the auction for the 6-month GHS 940.42mn bill, which matured January 19 was “severely undersubscribed, leaving a shortfall of GHS 855.42mn.

Democratic Republic of Congo: Opposition leader Moise Katumbi has vowed to cancel a controversial plan to allow drilling for oil and gas in one of the world’s most important carbon sinks if he secures victory in the presidential elections later this year.  Plans to drill in 30 blocks, several of which overlap with the world’s largest tropical peatlands, have drawn criticism from climate activists and a plea from US climate envoy John Kerry to halt part of the program.  His request was rebuffed by President Felix Tshisekedi in 2022.  Tshiskekedi has maintained that the DRC has the right to exploit its fossil fuel resources as it needs to develop its economy.

Zambia: Speaking during a visit to Zambia, US Treasury Secretary Janet Yellen said that it was critically important to restructure Zambia’s debt and that she believes progress could be made after her talks with key creditor China last week.  Yellen added that Zambia’s debt overhang was a drag on its whole economy and that China had been a barrier to reaching a resolution on the country’s debt problem.  However, Yellen said that she was encouraged that progress could become possible shortly following her meeting with Chinese officials.  Meanwhile, President Hichilema on Monday said that the country’s creditors should quickly agree on the content of a debt restructuring and that if that was not concluded soon, it may distort economic recovery efforts.  Hichilema made the remarks during a visit to Zambia by IMF Managing Director Kristalina Georgieva.  According to, to the president, “if we can conclude this thing (the debt restructuring) by the end of the first quarter of 2023, I think it can help a lot to open up areas that are sometimes causing negative sentiment.”

While the rate of depreciation on the Egyptian pound has slowed in recent sessions, traders in the derivative markets continue to bet on further weakness. Note that the pound has lost north of 17% against the USD to trade at record low levels amid devaluations as authorities move to a more flexible exchange rate system and aim to address the worst foreign exchange crunch in years. With these losses, the pound ranks as the second worst-performing African currency year-to-date, with only the Ghanaian cedi faring worse. 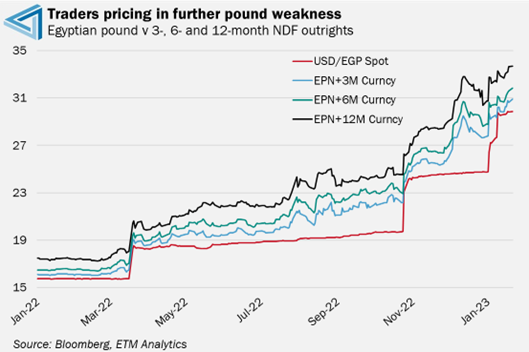 Despite double-digit losses thus far, the pound remains overvalued on a real effective exchange rate basis, and traders in the derivatives market continue to price in further pound weakness. For context, the 6-and 12-month non-deliverable forward tenors are pricing in depreciation of around 7% and 13%, respectively.

The recent devaluations are in line with the pledge to maintain a greater exchange rate flexibility by authorities and have helped narrow the premium between the official and parallel market rates and triggered inflows. How much further authorities allow the pound to weaken, however, remains to be seen given the implications on inflation and debt servicing costs.

Ghana is making progress in its debt restructuring, softening its stance slightly this week as it proposed that it will pay a 5% coupon rate on 2023 local currency debt, that is the subject of the ongoing debt swap negotiations. This is a departure from their earlier stance of paying no interest on debt this year. The shift, however, has both positives and negatives. It is positive from the progress standpoint on the restructuring of local debt, showing that the government is still flexible as it looks to further negotiations. However, holders of foreign-currency debt will be getting nervous as any concessions made to local-currency holders will potentially increase the burden that foreign-currency debt holds will face, as the costs will need to be absorbed somewhere. 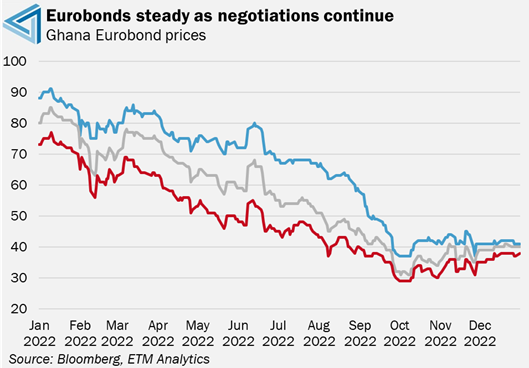 As investors fret over what might happen to foreign-currency bondholders, the bonds have traded fairly steadily in recent sessions. The more concessions given to local-currency holders, however, the more pressure might be placed on the country’s external bonds. Investors in Ghana’s external debt, therefore, will be watching the negotiations closely. It will not be smooth sailing as local banks are expected to continue to hold out for even better terms in order to ensure that they minimise losses, with local sources already suggesting that some could face collapse if the negotiations do not go their way.

Meanwhile, holders of local-currency bonds due in 2027 and 2035 will be watching closely given that their coupon payments are due next month. These bonds have weakened marginally this week so far as there is still a high probability that coupon payments on these will be missed.

Egypt’s trade deficit shrunk in November, from -2.914 billion to -2.155 billion, continuing the trend seen since September. The November data was released alongside some initial estimates for the year 2022 as a whole. The figure suggests that Egyptian exports reached $53.8 billion in 2022, which is a 20% increase compared to the previous year. Egyptian Minister of Trade and Industry Ahmed Samir stated that despite the challenging global circumstances, the non-petroleum exports of Egypt registered a record total of $35.612 billion, a 12% increase compared to last year. 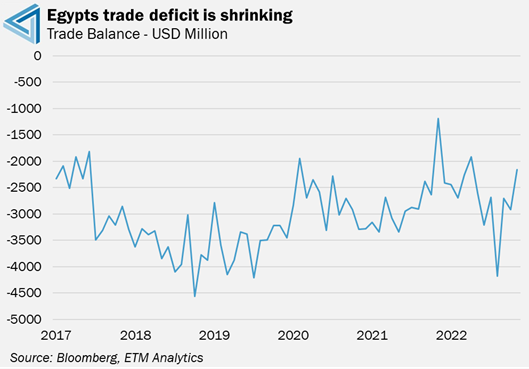 For November specifically, exports on a yearly basis were down 15.4% compared to a 41.5% decrease in October. This suggests that even though exports have been falling, the pace of the decrease has started to slow and things may be starting to normalise, especially now with the currency having been devalued once again. In terms of inbound shipments, imports in November were up 16.1% y/y compared to 1.7% y/y in October.

Going forward, we expect to see Egypt's trade deficit continue to shrink as shipping prices ease and supply backlogs start to clear, while the devaluation of the currency will help to correct the imbalance and help to encourage a rebound in exports. Egypt's refined petroleum exports have also started to increase, however Egypt still imports crude petroleum, therefore if crude prices remain elevated, we could see the shift in Egypt's trade deficit become a bit more protracted. Lastly, the other major commodity that Egypt imports is wheat, therefore the country’s trade balance is going to be highly affected by the movement in wheat prices in the coming months.