Oil has opened the new week lower, with Brent futures trading near $111 per barrel and WTI below $108 per barrel this morning as recession fears continue to dominate market focus. Widening COVID outbreaks in China are also denting sentiment towards oil this morning. Several hundred new cases have been reported in some of the nation’s eastern provinces, testing the government’s zero-COVID protocols. This will keep traders on edge as any further lockdowns in the world’s largest crude importer could see prices slide quite sharply, given how sensitive the markets are to recession concerns at the moment.  However, beyond near-term demand concerns, the crude market remains fundamentally strong at the moment, with global inventories being slashed rapidly and refining margins still elevated. Uncertainty surrounding Russia’s oil exports also remains a constant factor, suggesting that any price slide over the near term will be limited and potentially short-lived until we start seeing greater signs of demand destruction globally.

Global bond yields continued to plunge at the end of last week, with 10yr US yields touching 2.800% during intraday trade on Friday before recovering to some degree to close the week at 2.9040%. With the US markets shut for a holiday today, there will be no settlement for USTs. However, we have equity futures trading in the red ahead of the European open, suggesting that bonds may remain in favour in the session ahead, given that recession fears are still driving market action right now.

It should be noted that trading volumes today will be lower than usual with the US markets shut for Independence Day celebrations.

Egypt: Data from the Central Bank of Egypt showed that foreign holdings of Egyptian Treasury bills fell in March and April by a combined $7.2bn. The net foreign assets of the banking system meanwhile fell in May by $3.5bn. The data confirms that US Federal Reserve rate hikes that started in March and Russia's invasion of Ukraine have complicated Egypt's efforts to attract local and foreign borrowing to plug current account and budget deficits.

Kenya: Economic growth in Kenya slowed to 6.8% y/y in the first three months of 2022 from 7.4% y/y in Q4 amid a slowdown in the agricultural sector as a prolonged drought weighed. The Q1 GDP reading, however, bettered expectations of a slowdown to 6% y/y anticipated by analysts surveyed by Bloomberg amid solid growth in the financial services and public administration industries. The resilience displayed by the Kenyan economy in Q2 is, however, unlikely to be sustained in part due to the war in Ukraine, which has added pressure on the currency amid a shortage of dollars needed for imports, including pricier fuel and wheat, a persisting drought and election-related uncertainty.

Kenya: Speaking on Friday, Kenya's head of the public debt management office said that Kenya postponed a plan to borrow $1bn from commercial banks by the end of June due to unfavourable pricing. Kenya had settled on a syndicated loan before July 1 after it scrapped plans to sell Eurobonds, also citing high borrowing costs. The debt was set to help cover the budget deficit for the 2021/22 fiscal year that ended June 30. Kenya has struggled to raise funding amid aggressive tightening by major central banks, causing investors to flee emerging and frontier markets. The official did not mention any new debt plans.

Morocco: Moody's on Friday upgraded Morocco's outlook to stable from negative and affirmed its long-term issuer and senior unsecured ratings at Ba1. According to the ratings agency, the outlook change to stable reflects the recovery in real GDP to pre-pandemic levels and the government of Morocco's crisis management capacity demonstrated during the pandemic. The Ba1 rating affirmation reflects Moroccoʼs economic resilience and the build-up of significant foreign exchange reserves covering over six months of imports at the end of 2021, providing a buffer to absorb the impact of the global commodity price shock.

Nigeria: At 50.9 in June, down from 53.9 in May, the S&P Global/Stanbic IBTC Bank PMI signalled a 24th successive monthly improvement in business conditions in Nigeria's private sector. That said, the latest print was indicative of the weakest improvement for 17 months as recent challenges around cash shortages led to weaker new order growth and a renewed decline in output. While the Nigerian private sector remained in growth territory at the end of Q2 and sentiment regarding output in the next 12 months remained firmly in positive territory in June, there were some signs that soaring inflation weighed on hopes with the degree of optimism moderating from May.

Nigeria: To reduce Nigeria's dependency on oil, the European Union and development finance institutions will provide the country with EUR1.3bn ($1.4bn) in funding. According to the EU's ambassador to Nigeria, the funds for agriculture, climate, and digital projects will help Nigeria "achieve low carbon resource-efficient and climate-resilient development, creating jobs for youth and economic growth." The funding will support 60 projects through to 2027. Nigeria is encouraging investments in agriculture and technology-based infrastructure to reduce its dependence on oil and accelerate growth.

Nigeria: Nigeria reportedly lost $1bn in revenue during the first three months of the year due to crude oil theft. According to the Nigerian Upstream Petroleum Regulatory Commission, the amount stems from over 9mn barrels of oil stolen in Q1. Nigeria loses millions of barrels of crude oil each year to theft and vandalism, including the theft of crude from a network of pipelines run by large oil companies hindering its ability to maximize its foreign exchange earnings potential.

Forex: Kenyan shilling starts the second half of the year on the back foot

Selling pressure on the Kenyan shilling showed no signs of abating at the start of H2, with the currency plunging to its weakest level on record. The KES weakened to 118.22 per dollar on Friday, the lowest level since Bloomberg started publishing data on the currency in December 1988, as increased demand for dollars from energy and general goods importers weighed. The losses on the day added to the KES’s year-to-date drop of around 4.49% against the dollar. 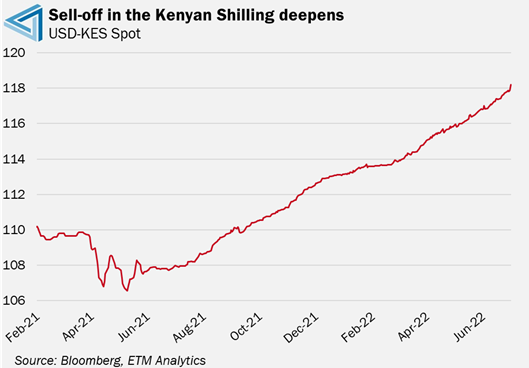 The weakness in the KES this year has come on the back of deteriorating terms of trade, heightened fiscal risks, election-related uncertainty, and a widening monetary policy differential with the US. Given Kenya is a net- importer of oil, its trade and current account balances have deteriorated amid elevated global oil prices. We expect Kenya’s current account to remain in deficit as commodity prices are set to remain lofty in the coming months as supply pressures persist. This will weaken Kenya’s terms of trade further, keeping the KES on the back foot.

With the aforementioned factors set to persist, the outlook for the KES remains bearish in the near term. It is worth noting that on a real effective exchange rate basis, the KES remains overvalued by over 11%, suggesting room for further weakness exists. In addition to driving inflation higher, continued KES weakness poses further upside risks to the country’s debt servicing costs.

Fixed Income: Ghanaian Eurobond yields plunge on reports that the government could look to the IMF

Ghana was back in focus on Friday as the country’s Eurobond yields tanked as reports surfaced that the government has dropped its plans to borrow as much as $750mn from international banks amid surging borrowing costs. There were also reports that the government could also turn to the International Monetary Fund for funding to help fund part of its budget shortfall.

The reports on Friday helped ease investor concerns over the country’s fiscal outlook, which deteriorated markedly during the Covid pandemic, triggering a sharp recovery in Ghanaian bonds. For context, Ghana’s 2032 Eurobond yield plunged 238bps on Friday to close the session at a 1-month low of 18.22%. While much of Friday’s recovery was driven by optimism surrounding the country’s fiscal outlook, favourable external conditions also contributed as oil and US Treasury yields continued to fall on the back of mounting global growth concerns. 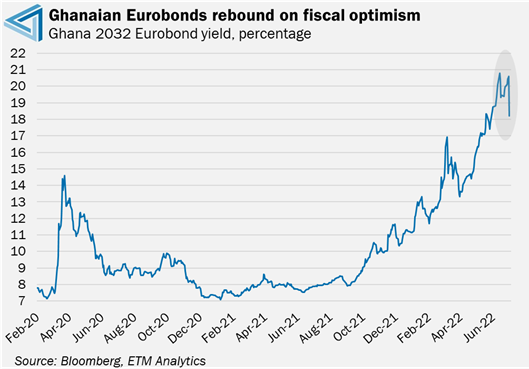 According to a copy of the terms sent to parliament by the Finance Ministry, Ghana will now borrow up to $750mn from African Export-Import Bank to meet its $1bn target by mid-July. The seven-year loans are slightly cheaper at the secured overnight funding rate plus 6.25% per year. Following the government's comments on Friday, investors' focus is now on whether Ghana will be able to secure a deal with the IMF. A deal with the IMF would undoubtedly boost investor confidence.

Macroeconomic: Shipping prices are another factor that could push inflation even higher

The decline in shipping prices over the past few weeks has been quite deceiving, as shipping prices are still at record highs. Freight costs have continued to be a significant factor driving global inflation, which is unlikely to decline in the coming months.

According to a report published by the UNCTAD, Between February and May 2022, the Baltic Dry Index has increased by 59% and could lead to an additional increase of 3.7% in consumer food prices globally. Disruptions to supply chains affect not only the transportation of the actual product but also the transportation of fuel and fertilizer, which results in input costs for farmers rising. Eventually, these costs are pushed onto the consumer since the producer is unable to absorb all of them. 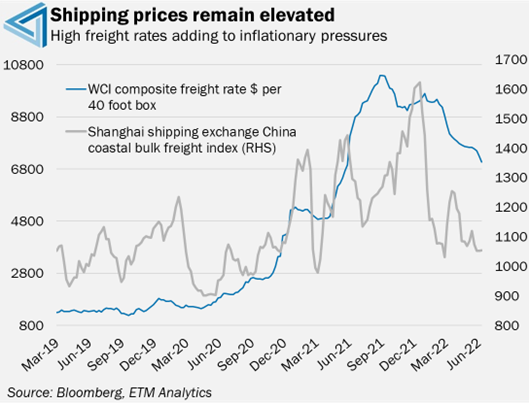 Inflationary pressures caused by high freight costs started in late 2020 when there was a rebound in container and dry bulk shipping. In 2021, the surge in e-commerce, capacity constraints, equipment shortages, and renewed virus infections in some parts of the world put supply chains under pressure again. The pressure has now continued into 2022, with port congestion and strained logistic systems still slowing down the movement of goods.

Going forward, smaller shippers are likely going to feel the impact of high freight prices the most as they are less able to absorb the additional expenses. The UN has said that inflationary pressures will likely continue until significant repairs are made to the maritime transportation system, which will require a lot of investments and policy changes.