FX: Although it seemed like the USD would regain lost ground as China’s Zero-Covid protests unfolded, the greenback struggled to build any traction. This may be a function of improved Asian equity market performances this morning, comments that the Fed will consider rate cuts in 2024, or that calm has returned to China. And as the USD struggles for traction, one eye is turning to developments in the US and the upcoming labour market data. Another strong reading will build the probability of another 75bp rate hike in Dec and the prospect that rates may peak at a higher level than first anticipated. It is keeping investors a little cautious and the USD range bound.

Fixed income: The global yield curve has inverted, following the US in signalling that a potentially deep recession is coming. The average yield on sovereign debt maturing in 10 years has fallen below that of bonds maturing between 1 and 3 years time, according to Bloomberg’s aggregate bond indexes. This is the first time that this has occurred on such a large scale and highlights the difficulties that economies are expected to go through in the coming months as the full impact of aggressively tighter monetary policy begins to filter through.

Commodities: Speculation that OPEC+ will announce another cut in output this weekend has seen crude prices rebound strongly this morning, with the front-month Brent contract nearing $85 per barrel after hitting lows of $80.60 yesterday in intraday trade. A weakening demand outlook remains present and the technical picture for the oil market suggests that a shift back into a global surplus is coming, which should force the cartel’s hand into easing production again in order to balance the market. Market talk at the moment is that a production cut of anywhere from 1mn to 2mn barrels per day could be announced, which would come just a day before the EU implements their ban on Russian crude.

East Africa: The third round of peace talks between the government of the Democratic Republic of Congo and multiple armed organizations took place in Nairobi yesterday. The first two rounds of the inter-Congolese dialogue failed to achieve tangible results due to various clashes. The talks are being held in an effort to bring peace to the east of DR Congo, where over 100 armed groups have wreaked havoc for nearly three decades and take place less than a week after a summit of regional leaders in Angola, where they signed a ceasefire in the ongoing conflict involving M23 rebels. According to local reports, the M23 rebels, who have been fighting the government forces since May this year, were not invited to the talks. The inter-Congolese dialogue will be presided over by Burundian President Evariste Ndayishimiye, who also serves as the East African Community's (EAC) chair. Both EAC facilitator and former Kenyan President Uhuru Kenyatta, William Ruto, will be present. The EAC has established a regional force to restore peace in eastern DR Congo.

Namibia: TransNamib, the nation’s state-owned railway company, seeks to shift its coal exports from Botswana off the roads and onto the railways by early 2023 in an effort to double exports via Walvis Bay port, its Chief executive was reported saying yesterday. The shift to the rails will cut transportation costs and enable miners to boost exports. Meanwhile, landlocked Botswana is seeking alternative routes to export its coal due to disruptions from South Africa's railway lines to Richards Bay port, the largest coal terminal in Africa. Namibia and Botswana, along with many other African nations, are vying to increase their coal exports in the face of soaring European demand for the commodity following the imposition of sanctions on Russian coal due to Moscow's invasion of Ukraine.

South Africa: Unemployment figures will be in focus today. The level of slack in the South African labour market remains extremely high despite the jobless rate falling in the last two quarters, reflecting an economy that is not growing at a pace that could open more employment opportunities for people. The disparity between the available skillset and skills required to drive productivity alongside strong labour union activity and other structural impediments are headwinds facing the domestic labour market. Given that these factors are likely to remain prevalent for a longer period until reforms are intensified, the unemployment rate will likely remain high in the coming months. As such, domestic demand dynamics will remain weak, further detracting from the economic growth outlook.

Zimbabwe: Data from the Zimbabwe National Statistics Agency showed that consumer price inflation growth decelerated for the third consecutive month in November. Specifically, headline inflation slowed from 268.8% y/y in October to 255.6% y/y, the slowest growth rate in five months. Month-on-month, inflation decelerated from 3.2% to 1.8% in November. Although inflation has slowed in recent months, it remains very high compared to other regional peers, suggesting that there is still room for the central bank to tighten interest rates at the last meeting of the year later next month.

Nigeria: With elections drawing nearer, things are beginning to heat up in Nigeria. Reports from the weekend revealed that the electoral authority offices and voting materials were torched in the country’s volatile southeast. According to the Independent National Electorate Commission (INEC), the fire destroyed 340 ballot boxes, 130 voting cubicles, 14 electric power generators, and quantities of Permanent Voters Cards (PVCs). It is worth noting that this is the third attack on an INEC office in three weeks, highlighting intensifying campaign violence several months ahead of the election.

Namibia: Namibia’s ruling party South West African People’s Organisation (SWAPO), elected Deputy Prime Minister Netumbo Nandi-Ndaitwah as its vice president, making her the frontrunner to lead the party into presidential and national elections in 2024. She will be the first woman leader before the election after defeating Prime Minister Saara Kuugongelwa-Amadhila and Environment Minister Pohamba Shifeta. President Hage Geignob, who is due to step down at the end of his current term, warned Nadi-Ndaitwah that her task would be challenging as the ruling party’s support has waned over the years amid growing discontent over rampant unemployment and corruption.

Forex: Market bears are pricing in more losses ahead for the Egyptian pound

While the Central Bank of Egypt has significantly devalued the EGP this year, pricing in the derivatives market implies that traders expect further depreciation in the currency in the months ahead. Non-deliverable forward outrights are trading well above the current USD/EGP spot price. For context, the 6-month NDF outright is currently priced at around 26.37, according to Bloomberg data. NDF pricing implies that the EGP will depreciate by more than 7% over the next 6 months. 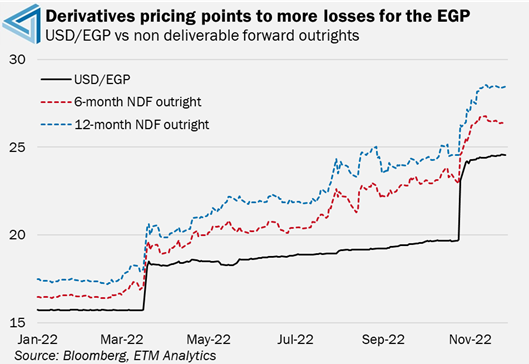 While the Central Bank of Egypt has committed to more flexibility, there are signs that the market is pushing for more flexibility than has been allowed for. This is evident in the divergence in pricing between the spot price and NDF outrights. The big test for traders will be whether the central bank allows for the EGP to trade freely in the face of external shocks going forward. For now though, it is expected that the central bank will allow for flexibility in the currency ahead of the expected approval of a $3bn loan from the International Monetary Fund next month.

From a carry trade perspective, the significant devaluation in the pound has boosted the EGP’s carry trade appeal and helped regain the attention of foreign investors that dumped Egyptian assets earlier this year. Although the EGP could be in store for more losses in the near term, we expect the EGP to move back up the carry trade ranks in 2023.

While it has been a bruising year for emerging market assets, signs are emerging that a recovery is underway. Weekly data published by Bloomberg showed that US-listed emerging market exchange-traded funds (ETFs) recorded a third straight weekly inflow last week. Specifically, EM ETFs recorded net gains of $1.56bn in the week ending November 25, compared with gains of $2.07bn in the previous week. A breakdown of the data showed that stock ETFs expanded by $1.38bn, while bond funds rose by $181.3mn. 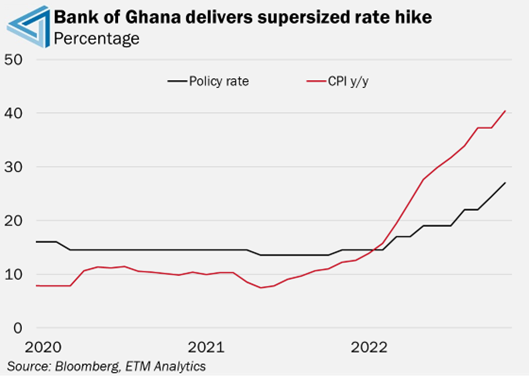 Regionally, South Africa recorded the biggest inflows, followed by Egypt, Nigeria and Kenya. Interestingly, with the exception of South Africa, most of the inflows into Africa focussed ETFs listed in the US were into bonds and not equities. After falling to a multi-year low at the start of the month, the Bloomberg African Bond Index has rebounded smartly as signs of a global pivot in monetary policy intensify. For context, the Bloomberg African Bond Index has risen by 5.74% since the start of the month and looks set to record its first monthly gain since May.

While it has been a downbeat start to the week for higher beta assets, the global monetary policy tide seems to be turning, with traders across the globe pricing in rate cuts next year amid expectations for a meaningful slowdown in global growth. In Africa, we have already seen the Bank of Angola begin its easing cycle after hiking rates aggressively in the wake of the Covid-19 pandemic. That said, we need to see more concrete evidence of a shift in policy from the Federal Reserve before traders turn wholesomely bullish on African bonds to take advantage of the attractive valuations on offer.