The global rates markets have been jolted this morning by the BoJ, which surprised everyone by announcing a tweak to their yield curve control measures. The tweak will allow benchmark JGB yields to rise to 0.500% from the previous target of 0.250%, which signals that the world’s final negative interest rate regime is beginning to normalise policy, even if this will be very gradual. The 10yr JGB yield is unsurprisingly rising this morning, breaching 0.400% at the time of writing. The weakness in JGBs has also dragged down USTs, with 10yr yields in the States rising almost 10bp this morning to near 3.700%. This has lessened the inversion of the US yield curve, although, at -59bp, it is still very significant.

Morocco: The Bank of Morocco will deliver its rate verdict today. At the meeting in September, the central bank raised its key interest rate for the first time since 2008, becoming the latest African nation to reverse years of gradual monetary easing to tackle inflation that’s at its highest in decades. The 50bp hike marked a change for the country that had been an outlier in a world that’s been boosting rates in response to the biggest inflation shocks in years. With inflation expected to be higher, we could see the bank continue to tighten monetary policy.

Kenya: To shore up its finances and boost its dwindling reserves, the IMF has agreed to lend Kenya about $447mn. The funds include an augmentation of about $216mn and bring the cumulative disbursements to Kenya under existing arrangements to about $2.4bn. According to the lender, the funds will be for addressing debt vulnerabilities, supporting the response to the Covid-19 pandemic and global shocks, and to enhance governance and broader economic reforms. After the IMF executive board completed a review of its loan programs it noted that while Kenya’s economy remains resilient, “downside risks predominate in the near term.”

Ethiopia: In a wide-ranging interview, Ethiopian Airlines CEO forecast passenger business to recover to pre-pandemic levels in its financial year ending in June. According to Mesfin Tasew Bekele, Ethiopian Airlines, Africa's biggest carrier, will ferry 12.7mn passengers during the year, up from 8.6mn passengers in the previous financial year and 12.1mn before the pandemic struck. Bekele attributed that forecast to the lifting of restrictions on movement worldwide, the carrier's expansion in terms of new planes and destinations, and a peace deal signed last month to end a two-year conflict in the north of the country. That said, Bekele warned that any delays in the reopening of China could, however, curb the projections since it is a key market for both passengers and cargo. Meanwhile, Bekele also said that the airline is planning to double its fleet and network and boost annual revenue and passengers by 400% and 440%, respectively, by 2035.

Kenya: Speaking in Washington recently, president William Ruto said that he had drafted a plan to urgently improve the country's fiscal position in a bid to avoid the economic crises that befell emerging and frontier markets this year. The president is planning to nearly triple annual tax collections to KES 5trn ($40.6bn) in five years. The overarching plan is to ease the financial burden on a country that currently spends more than half of its tax revenue on servicing liabilities. Ruto also plans to digitize the provision of all government services to ease revenue collection and close spending leakages. He also reiterated a plan to cut the 2022-23 budget by about $3bn, partly by halting some fuel and food subsidies. The measures could help Kenya achieve a target of raising its tax revenue to 25% of GDP from 15% in the fiscal year that ended in June.

Nigeria:  Presidential candidate Atiku Abubakar said he would remove the country's costly fuel subsidies, allocate $10bn to small and medium enterprises to create jobs, and unify the multiple exchange rates if he wins the February 2023 presidential vote. According to Abubakar, the subsidy will be removed within 100 days of taking office. Nigeria spent NGN 1.59trn ($3.53bn) subsiding gasoline in the first six months of this year, providing drivers with among the lowest pump prices in the world. The World Bank and International Monetary Fund have repeatedly urged the government to halt the support, which is forecast to cost the country at least $9.6bn this year. Abubakar also said he would approach creditors to renegotiate and reschedule its debt payments and boost the number of security forces in the country.

South Africa: The ANC re-elected Cyril Ramaphosa as the party president, opening up another term for the reformist. Ramaphosa defeated Zweli Mkhize in what was a slightly tighter race than many had expected, with 2476 votes to 1897 votes. Overall, however, it was still a relatively convincing win for the current president. The news has been welcomed by the markets, with the ZAR outperforming its EM peers on the day and banking stocks on the JSE rallying. The results will alleviate some political uncertainty going into the new year and will help to set the stage for a potential ZAR rally through the early months of 2023, barring any further political surprises or major shifts in global sentiment.

Zimbabwe: As part of measures to help address crippling power outages in the country, Zimbabwe has identified 27 solar independent power projects that could generate as much as 1,000 megawatts of electricity. The plan is estimated to cost $1bn. According to the finance minister, the "government intends to speed up investment by the independent power producers projects with the main focus on solar projects.".

Trade dynamics play an important role in a currency's resilience. It is, therefore, worth looking at the latest trade data out of Uganda. Data released yesterday showed that Uganda's trade deficit narrowed to $301.67mn in October from $338.51mn in September. The deficit's narrowing was due to an increase in export receipts and a decrease in the import bill. However, compared to the comparable period a year earlier, the trade deficit widened from $245.10mn to $301.67mn following a higher increase in the import bill that more than offset the growth in export receipts. 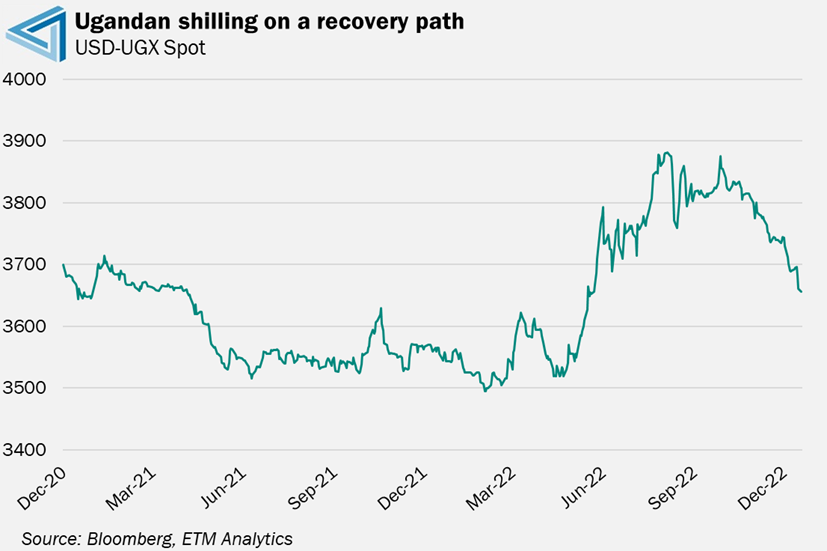 Fixed Income: Ghana defaults on its Eurobonds after it suspends interest payments on external debt

News headlines were bombarded by reports that Ghana had suspended payments on its external debt to stabilize its finances. The Ministry of Finance confirmed in a statement that Ghana had suspended payment on $13bn of Eurobonds, commercial loans and most bilateral obligations pending an agreement with creditors. The unexpected move triggered a sharp sell-off in Ghanaian bonds as investor sentiment tanked. For context, Ghana’s 2027 Eurobond price fell by 6.56% to 35.67, its lowest level since 26 November. 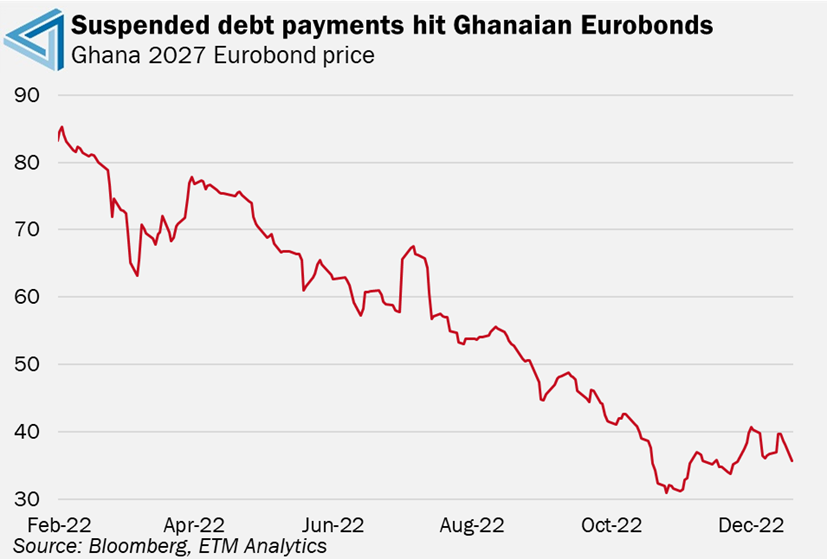 While inflation across the world continues to run hot, signs are building that global inflation has peaked. The correction in commodity prices, tighter monetary policy conditions and slowing growth are some factors helping to drive inflation lower. The accompanying chart shows that the World Economy Weighted Inflation Index appears to have topped out, falling from a peak of 10.34% y/y in October to 9.69% y/y in December. Inflation in the US, UK and EU also looks like it has peaked and given the high base effects of 2022, the correction lower in energy and food prices is expected to fall further in the months ahead. With inflation slowing and central banks front-loading their rate-hiking cycles against the backdrop of slowing growth, it appears most of the tightening has been done. 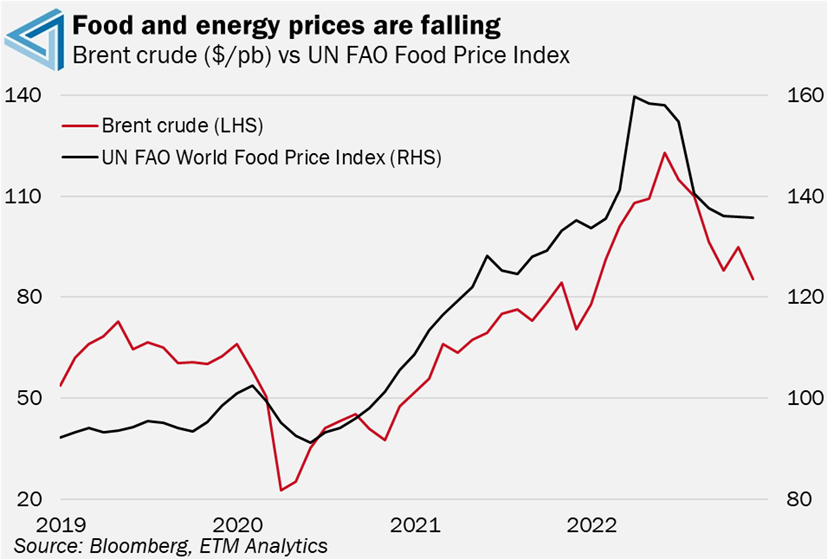