Ghana bows to the inevitable as government seeks IMF help

Ghana's government announced on 1 July its intention to commence formal engagement with the IMF, according to a statement released by the country's Ministry of Information. We take this to mean an IMF programme (or bailout), although the carefully constructed statement doesn’t say it explicitly. The sensible, but surprise, announcement marks a dramatic U-turn for the government, which has previously set much store in not needing the Fund's help (for example, when it ruled out going to the Fund in March), despite the inevitability of the decision in the eyes of most investors.

Indeed, we find the statement’s wording a little odd, “inviting the Fund to support an economic programme put together by the government of Ghana”. This suggests that Ghana merely wants the IMF to rubber stamp its own home-grown programme, although the IMF will surely want more say on that (and hence, what happens if Ghana doesn't like what it hears?), and it doesn’t even mention a financial arrangement (but does refer to balance of payments support), although there would be little benefit in a non-financial arrangement as Ghana needs the money.

The government explains that the decision to turn to the Fund is to provide balance of payments support in the face of challenges due to Covid and the war in Ukraine. The statement said that President Akufo-Addo had authorised Finance Minister Ofori-Atta to commence discussions, after having conveyed Ghana’s decision to the IMF MD Georgieva. Ghana’s cabinet endorsed the decision.

The announcement will come as some relief to bondholders who have been wanting the government to take this step for some time, although not expecting that it will happen anytime soon. As we noted in the takeaways from our recent round of London client meetings, the market has increasingly come round to the view that a Ghana default, if not imminent, is becoming more inevitable, which raised the question – asked by virtually everyone with an interest – of when, and at what point, does Ghana go to the IMF, and what will the IMF do?

We’ve reached this point – and rather more quickly than we think anyone expected – with CPI inflation running at 27% yoy (higher than Angola), declining reserves, potential problems with securing the syndicated loans (given secondary market eurobond yields over 20% at the front and belly of the curve) and protests last week over rising living costs. It seems the government has reached its pain threshold. We thought things would have to get worse – backs more firmly to the wall – before Ghana came to this decision. To its credit, the government has at least acted now, before the situation is much worse or it is too late. 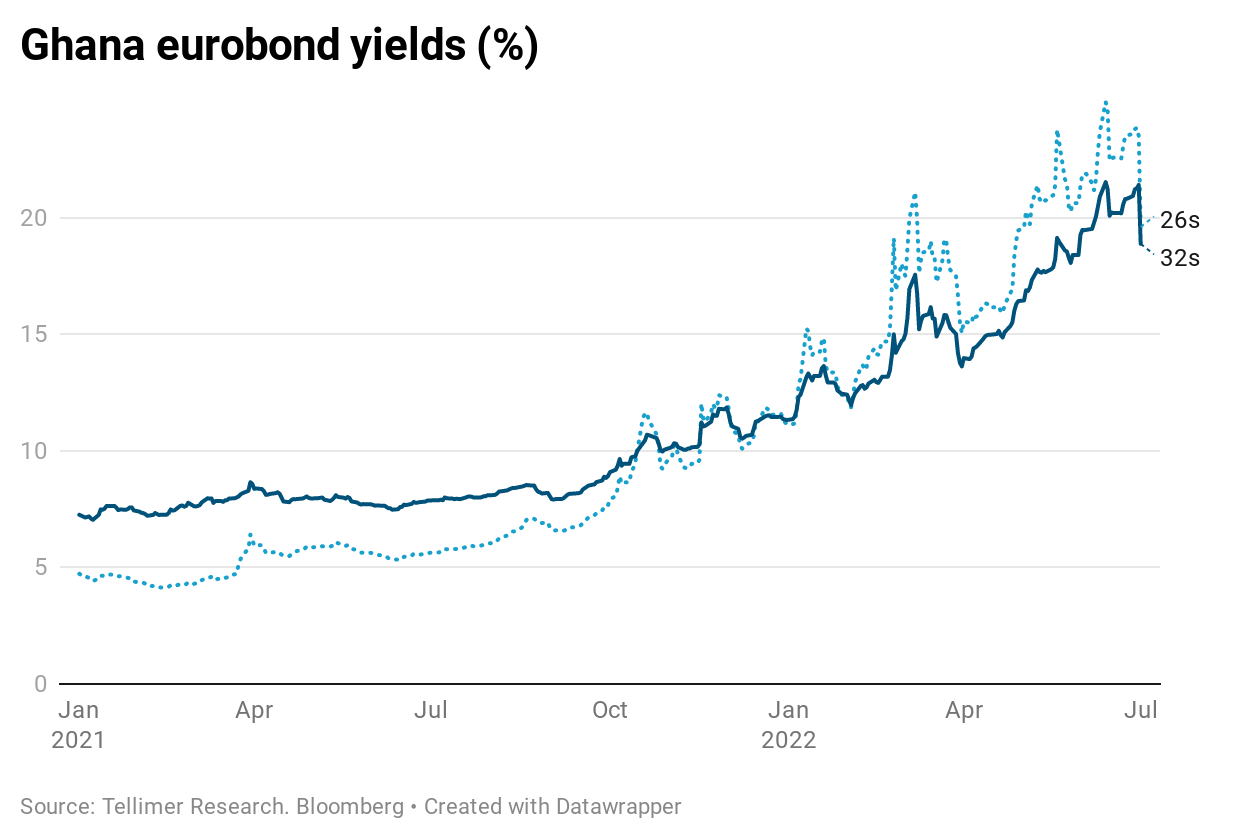 The timing is also significant in terms of Ghana’s own election cycle. It is some two and a half years before the next presidential election (due December 2024). If it had waited much longer, the government would have had little time left ahead of the elections to see the benefit. But that is assuming a programme can be agreed soon, and even then, it may already be too late for any economic improvement to translate into public support. Its refusal to go to the Fund sooner, especially after losing market access last autumn and with a sense of inevitability that it would have to go to the Fund at some point, could already prove costly for the government's re-election chances. But, in the last roll of the dice, and given its home-grown programme isn't working, there is still a chance that it could pull it off.

However, the decision may still come at a political cost domestically. It is a significant and potentially embarrassing U-turn for the government, given its longstanding resistance towards seeking IMF support in favour of its own homegrown programme, which could damage its economic credibility. Strong messaging could mitigate the political damage. External conditions – with the twin shocks of war and rates – have surely deteriorated this year, and are outside Ghana’s control. However, Ghana's problems, with longstanding concerns over debt sustainability, pre-date this year, and its weak fiscal position and now dire financial situation are entirely of its own making (as it employed a post-Covid fiscal stimulus of Advanced Economy proportions under the complacent thinking that financing would always be forthcoming).

What will the IMF do?

Yet while no doubt the decision will be greeted favourably by bondholders, if not voters, it raises some interesting questions for the IMF in terms of programme design – such as, what kind of programme and how big (as a guide, 100% of quota amounts to cUS$1bn, while IMF repayments from past programmes also jump from 2024, which could also have a bearing on programme size), what is the size (and composition) of the required fiscal adjustment, and is it feasible, will Ghana be willing to do what the IMF want, and even if they do, can they implement it, is debt still seen as sustainable, and if not, will the Fund require private sector involvement (PSI), and will domestic debt be included if so?

We probably know what the IMF will want to see. Its policy advice – a credible fiscal consolidation path that will restore medium-term debt sustainability, although the size of that adjustment may be less clear at this point – is likely to be little different to what it said in its last substantive engagement with the authorities, the 2021 Article IV, which was published last July. Only now, the starting point is worse given the deterioration in external and domestic conditions since then. And we know domestic revenue mobilisation, a key IMF recommendation, has long since been Ghana's Achilles' heel.

Moreover, the IMF’s fiscal realism tool already indicated back then that the size of the required fiscal adjustment in the baseline (which the Fund argued still wasn't enough; they called for something even bigger) was heroic based on past standards (the primary adjustment in the baseline was in the top 4% of historical cross-country experiences; that is, it is unlikely Ghana could pull it off). That must suggest doing even more would be nigh on impossible.

This must put debt sustainability in doubt. It was already on a knife-edge, with debt assessed to be sustainable in the DSA contained in the 2021 Article IV, but at high risk of distress, under a barely feasible fiscal adjustment that wasn't big enough anyway. The question will be whether the IMF still sees the debt as sustainable and, if not, will they seek PSI on the bonds, pushing Ghana into Common Framework territory.

Moreover, while at 80% of GDP, public debt does not scream insolvency, particularly if a credible fiscal adjustment can be put in place (although the fiscal realism tool may cast some doubt on the chances of that, which might suggest debt is not sustainable), it is the high interest burden – at 7.5% of GDP (and c37% of revenue) – that really hurts Ghana. So, the IMF’s dual focus on gross financing needs (cash flow) could still indicate an unsustainable debt even if on a stock basis it is not. In addition, domestic debt is as much part of the problem as external debt (and accounts for most (two thirds) of the interest burden).

But will the official sector want to make an example of Ghana? The softer IMF may be reluctant to push Ghana, the poster child of Sub Sahara Africa eurobond issuance, into default, and risk precipitating an African debt crisis, particularly if one argues its problems are due to forces outside its control. In addition, with Ghana's next big eurobond payment not coming until 2025, bond maturities fall mainly outside any likely IMF programme period, which could be another reason for leaving them alone. However, there are some hardline voices in the official sector, still seething from the lack of private sector participation in DSSI, that may wish to teach bondholders a lesson.

It is also not clear how long programme negotiations will take. They could take several weeks or more. In the meantime, the programme request appears to render the forthcoming mid-year budget review somewhat meaningless. We doubt any substantive programme details, which could then be factored into the budget review, will be agreed by then, so any budget projections or revisions will presumably be based on current settings; although that would at least better inform the starting point and the “baseline”.

We retain our Buy recommendation on Ghana US$ bonds, at a price of US$54.8 (yield 19%) on the ‘32s as of cob 1 July on Bloomberg (mid price basis), having upgraded them from Hold to Buy over three weeks ago after prices fell in line with even our more pessimistic estimates of recovery values. The bonds (both the front end – the '26s, and the belly of the curve – the '32s) rallied c6pts on Friday, likely as a result of the positive news on IMF engagement, notwithstanding perhaps some concerns that may sink in later on what that engagement will look like and what that could mean for bondholders. 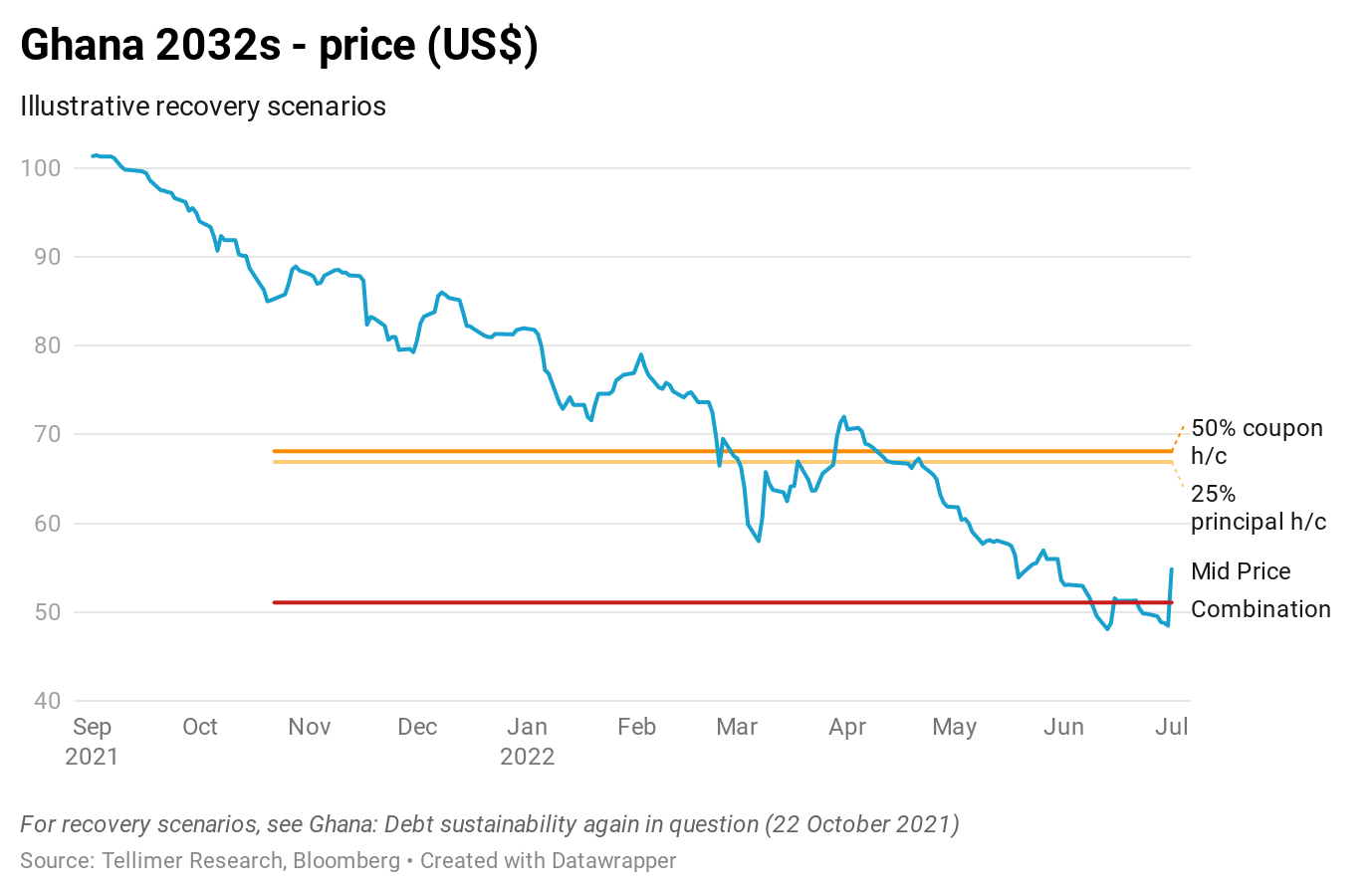