It appears as though the Fed minutes were generally positive for the USD that has rallied overnight to keep the pressure on most other currencies. Indications that the Fed will likely persist with aggressive tightening, although maybe softer than the 75bp feared. Such bold monetary tightening will dial up the pressure on stocks and elevate risk aversion. The theme of rotating back towards the USD remains intact for now, although there is plenty of evidence suggesting that there is a lot of monetary tightening already priced in. The EUR-USD has however held firm at around 1.0160, while the GBP-USD remains on the defensive as it slips back to 1.2035.

US Treasury futures are rebounding marginally this morning following yesterday’s sell-off. Yields were higher across core markets yesterday, with gilts underperforming following the blowout CPI numbers, which took inflation to its highest in 40 years at over 10%. This drove an inversion of the yield curve, with the 2v10 spread closing the day at around -9.63bp. It also propelled yields higher in other markets, with the US 10yr benchmark yield rising to 2.900% while 2yr yields pushed through 3.25%. Bund yields also saw double-digit increases yesterday, with the 10yr closing at 1.08000%. This rally for yields globally took markets in a risk-off direction, and after the release of the Fed minutes last night, it does not look like we will see much in the way of a significant rebound for bonds in the coming sessions.

Botswana: The Botswana government has proposed a new law to increase the minimum domestic investment by local pension funds to 50% of their assets from the current 30%. According to Finance Minister Peggy Serame, "this is an effort to avail funds held by pension funds available for developmental purposes in Botswana, to contribute towards boosting the local economy and to create the much needed sustainable jobs." The latest central bank data showed that local pension fund assets were BWP 115.1bn at the end of May, with 62% of the total invested outside the country. It is worth noting that the current limits for offshore and domestic allocations were set after asset managers complained of a lack of investment opportunities in the country.

Egypt: Yesterday Central Bank of Egypt Governor Tarek Amer resigned in a surprise move ahead of today's rate-setting meeting. A brief statement from the presidency offered no reason for Amer's resignation, expect that Tarek has now been appointed as a presidential advisor by President Abdel-Fattah el-Sissi. Tarek had been governor since November 2015. At the time of writing, no replacement had been named.

Ghana: Producer price inflation (PPI) in Ghana accelerated further in July, coming in at 41.2% y/y from 38.7% y/y in the month prior. PPI in Ghana has risen since September 2021, and the July reading was the fastest pace of price growth in the productive sector since September 2014. The persistent increase in supply-side inflation will culminate in higher consumer prices as producers pass some of the costs to consumers. This suggests that inflationary pressures will remain robust in the economy.

Mozambique: To improve the country's business environment and attract more visitors and investments, the Mozambican government has announced a package of new policies on entry visa and period of stay for foreigners. Some of the policies included transforming the short-term tourism visa into a mixed tourism and business visa, which will be valid for 90 days instead of the current 30 days. The period covered by a temporary residence permit for investors will be extended from one to two years if the investment amount reaches a minimum of $5000. For an investment of $50mn or above, a temporary resident permit will be for five years. According to the deputy justice minister, the policies will be submitted for approval to the Assembly of the Republic of Mozambique, the country's parliament.

Oil: Oil prices have fluctuated this morning but are managing to hold onto yesterday’s gains, with Brent trading near $93.60 per barrel while WTI is near $88 per barrel when looking at the front-month contracts. Traders have had to weigh up a very bullish report from the EIA yesterday against lingering economic growth concerns. The report from the US showed a massive 7mn barrel decline for nationwide stockpiles, with gasoline inventories also dropping sharply. While the declines were driven largely by US oil exports to Europe, which reached a new record high, they still pointed to a relatively robust demand outlook for fuel in the US, smoothing out the numbers from the week prior.

Forex: Central Bank of Egypt is set to deliver its rate verdict today, currency weakness will be in the spotlight

Policymakers at the Central Bank of Egypt (CBE) will today decide on the lending and deposit rates. Consensus expectations are for the CBE to raise the overnight deposit rate by 50bps to contain inflation. Inflation in Egypt quickened after a month of cooling off, as rising food prices, a local hike in fuel costs, and a weaker currency added more pressure on consumers in July. While the renewed acceleration and upside risks to the inflation outlook suggest a rate hike is more likely, investors will look to whether the CBE will allow for more currency flexibility and devalue the Egyptian pound. 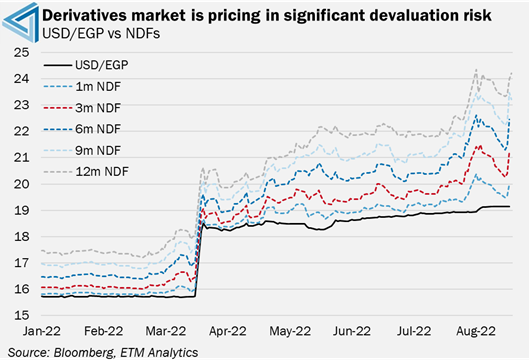 In recent weeks, a greater flexibility in the pound has emerged as an issue for Egyptian authorities who are seeking to secure a new loan from the International Monetary Fund. The pound remains overvalued on a real effective exchange rate basis, and the IMF has called for currency flexibility to avoid the build-up of external imbalances and facilitate adjustment to shocks. Though pressure has built in recent days, the CBE has denied that a second wave of depreciation is a possibility.

The surprise resignation of the CBE Governor a day before the meeting could signal a shift in the country’s exchange-rate policy. The near-fixing of the pound to the USD despite headwinds such as the coronavirus pandemic, rising global interest rates, and higher food and energy costs has intensified the downward pressure on the currency, and an adjustment may be required. Bets of a weaker pound have therefore grown. In the non-deliverable forward market, the three-month contract rose for a second day yesterday to price in depreciation of around almost 11%, while the 12-month NDF is pricing in more than 20% of depreciation risk.

Fixed Income: Bank of Ghana delivers its boldest rate hike on record as it intensifies its fight against inflation

In a bid to offer the ailing cedi support while at the same time arrest soaring inflation expectations, the Bank of Ghana delivered an outsized 300bps rate hike at its emergency meeting on Wednesday, taking the benchmark interest rate to 22%. Yesterday’s rate hike marks the biggest one on record and takes the cumulative rate increase since November to 850bps.

The Monetary Policy Committee also raised the primary reserve requirement ratio of banks from 12% to 15%. The increased reserve requirement ratio will be phased in gradually from September 1 to November 1. Another big takeout from the meeting was that the central bank is planning to buy foreign exchange from mining and oil companies to bolster its reserves, which have dropped to the lowest level since 2019. 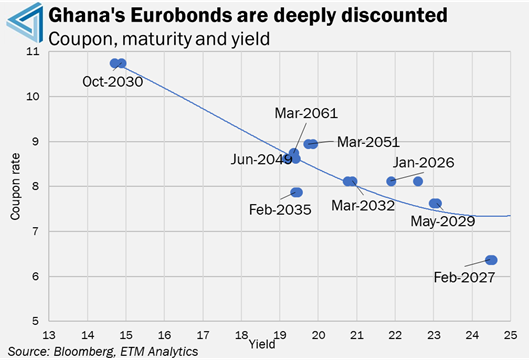 While the outsized rate hike shows that the Bank of Ghana is serious about reining in rampant inflation, Ghana’s real interest rate, which sits at 9.3%, remains deeply negative. That said, although inflation risks are acute, inflation in Ghana should begin to decelerate over the coming months. Money supply growth has been easing in recent months, commodity prices have come off their highs, and base effects are coming into play. Furthermore, the bold rate hike and planned FX measures should provide some much-needed support for the cedi.

With more than 50% of Ghana’s debt is denominated in hard currency, a stabilisation in the cedi would help ease fiscal fears. Given the significant fiscal premium baked into Ghanaian bonds, a culmination of a stabilisation/strengthening in the cedi, a compression in Ghana’s real negative interest rate, less aggressive global monetary policy tightening, and the securing of an IMF deal has the potential to trigger a sharp rebound in Ghanaian bonds.

Market focus is centred on monetary policy, with three African central banks delivering their interest rate verdicts yesterday. We also had the release of the July FOMC meeting minutes. While inflation pressures are still robust, signs are emerging that inflation is nearing its peak as global supply chains normalise and commodity prices correct lower. International food and oil prices, which have been the main drivers of inflation, have pulled back from their peaks and could head lower in the months ahead. 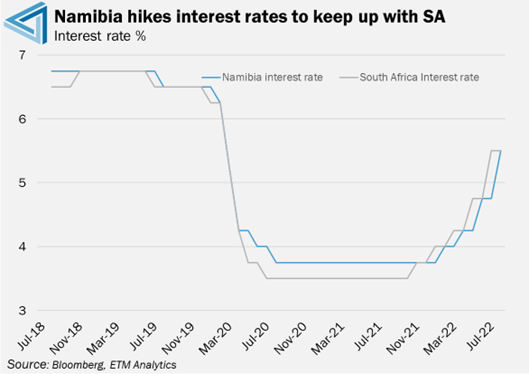 Against this backdrop, the Bank of Zambia decided to leave its respective benchmark interest rates on hold yesterday. Specifically, the Bank of Zambia left its monetary policy rate unchanged at 9.00% for the third successive meeting. The central bank said that the decision to leave rates on hold came on the back of a further projected decline in inflation and weak domestic growth conditions. Policymakers expect inflation in to slow back to single-digit territory over the next two months.

While the inflation outlook is tempering, the broad er hawkish bias remains intact, with central banks around the world still engaged in a fight against inflation. The Bank of Namibia is one such central bank that is still hiking rates aggressively as it looks to get a grip on inflation and inflation expectations. The Bank of Namibia’s Monetary Policy Committee voted in favour of a 75bps rate hike on Wednesday, taking the benchmark interest rate to 5.50%. The central bank said in its policy statement that the decision was taken with due consideration of the persistent inflationary pressures and is deemed appropriate to safeguard the one-to-one link between the Namibia dollar and the South African rand, while meeting the country’s international financial obligations.