Ghana presented its much anticipated 2022 budget yesterday. The budget has been seen as a litmus test of the government's fiscal credibility after the recent sell-off in its foreign bonds amid mounting concerns over debt sustainability.

The initial bond market reaction was negative, with the bonds falling by up to 6pts at the short end and 3-4pts at the long end, as the budget raised questions over whether the government will be able to get the deficit down as planned. Potentially confusing reports over the actual deficit figures may not have helped.

We cannot know with so many market players what each investor was reacting to, but the bonds may have overreacted, and could retrace some of the declines (the 26s are up 2.5pts today) – although it may be the case that the bonds sold off correctly, but for the wrong reason. What it does show, however, is how sensitive investors are to Ghana's fiscal numbers and reinforces the need for greater fiscal transparency.

The government's 2022 budget projects the overall deficit (including financial and energy sector restructuring costs) to narrow from an expected 12.1% of GDP this year (we think revised up from 10.6% in the mid-year budget review – MYBR) to 7.4% in 2022. That is a significant narrowing of 4.7ppts in one year. The government projects the deficit to narrow further over 2023-25, reaching the 5% goal contained in the Fiscal Responsibility Act in 2024.

On an underlying basis, the position is similar, with the overall deficit (excluding financial and energy sector restructuring costs) expected to narrow from 9.4% of GDP this year (unchanged from the mid-year budget review projection, which itself is positive as it signals that no further slippage is expected) to 6.4% in 2022. That is a 3ppts decline in the deficit.

However, we note that, under either measure, the government's deficit projections for 2022 are more optimistic than those of the IMF. 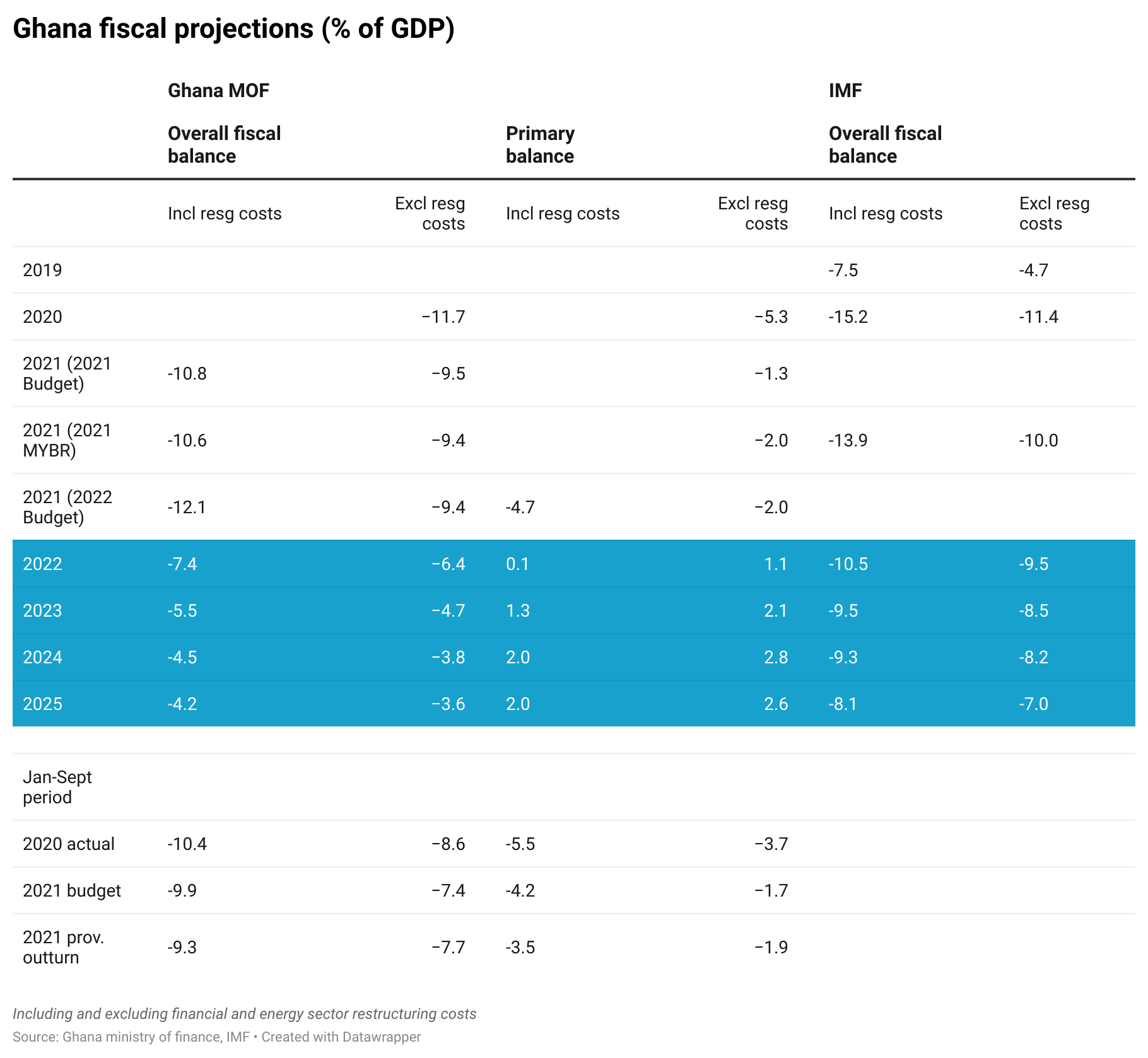 However, with the 3ppts narrowing in the underlying overall deficit, it is not clear where the additional 1.7ppts in the overall deficit including restructuring costs will come from.

Interestingly, Ghana plans to only announce a unified deficit figure that includes restructuring costs from next year, according to a Bloomberg report yesterday. Presumably, at some point, the restructurings will have been worked through and so there will be no more exceptional items, which currently weigh on investor sentiment.

However, although, on the surface, the budget signals a strong fiscal effort, the question is whether it is credible. In particular, the planned fiscal adjustment (4.7ppts in one year) seems to rely entirely on a sharp increase in revenue, amounting to 4% of GDP, with the government stating that revenue initiatives alone are expected to yield a minimum of 3% of GDP in 2022. Revenues are projected to rise over 40% between 2021 and 2022, increasing from 16% of GDP to 20%. 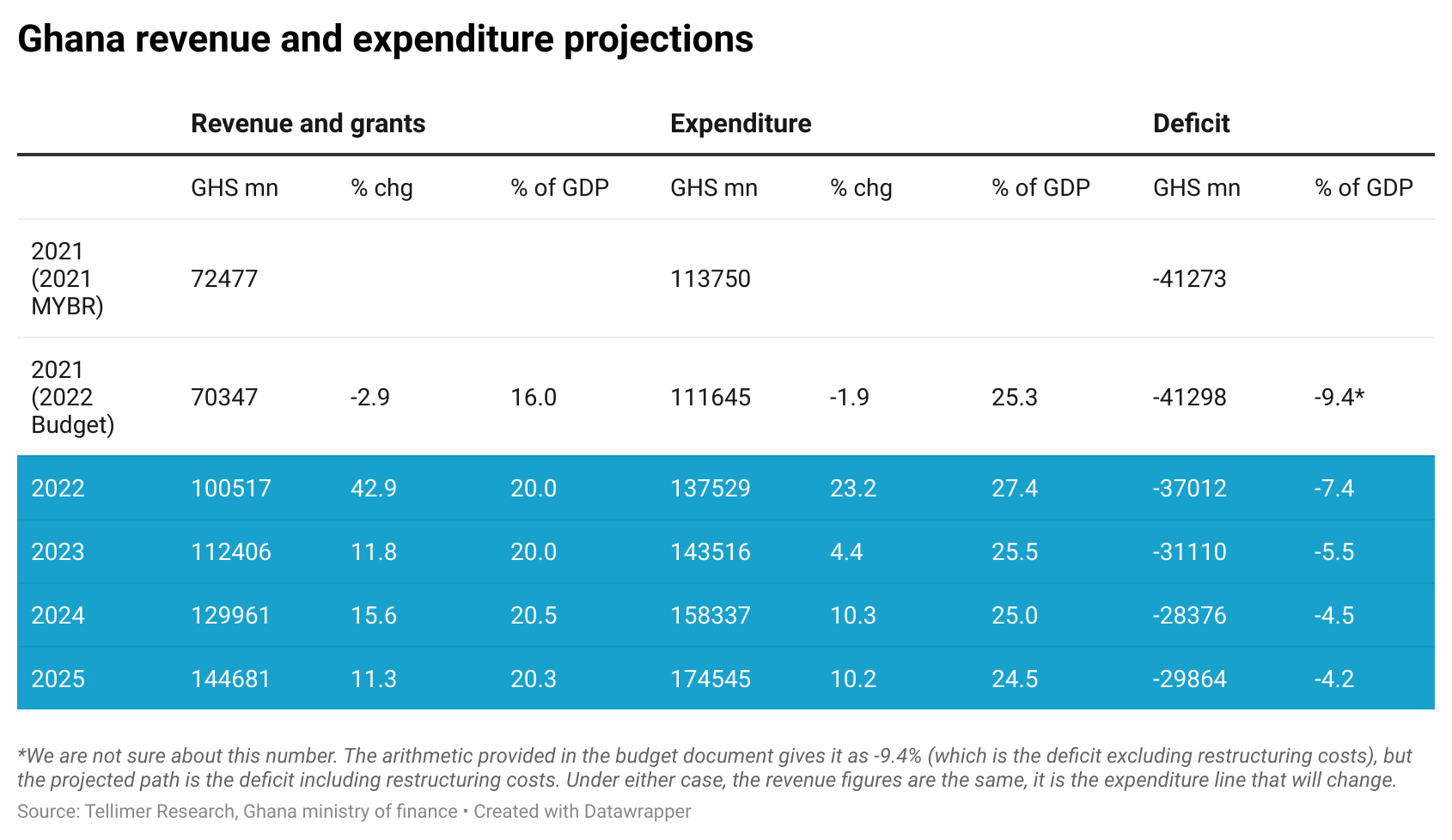 The expected revenue growth is due to the impact of improvements in tax compliance, reforms in revenue administration and a raft of tax policy initiatives. Stronger real GDP growth, rising to 5.8%, may also help.

However, we know Ghana has struggled over many years to raise domestic revenues, and it is not clear why 2022 will break so dramatically from the past. Indeed, revenues have underperformed this year, even with the pick up in real GDP growth to 4.4% from 0.8% last year. The recurring theme of revenue underperformance was a feature of the old IMF programme.

In particular, the IMF has been more cautious about expecting such revenue gains, based on Ghana's own experience and that of others in their cross-country comparisons. For instance, the government had projected revenue measures in the 2021 budget to yield 1.4% of GDP, two-thirds of which was expected to come from improved tax administration (better compliance). However, the IMF projected a lower yield from the government's tax administration measures in its 2021 Article IV, discounting the expected revenue gains by half. So, while the 2022 budget projects the deficit excluding restructuring costs at 6.4% of GDP next year, the IMF projects 9.5%, which is little changed from what it expects for this year.

Public spending, meanwhile, is more constrained over the medium term, although we might have also hoped for more spending restraint next year. Government spending is projected to grow by 23% in nominal terms (which is still a 15% real terms increase), rising from 25.3% of GDP this year to 27.4% next year, before falling back to 25% of GDP by 2024.

Taking two of the biggest spending items, wages and interest, which together account for 50% of total spending, wages are expected to fall to 6.1% of GDP, down from 6.4% this year, while interest increases slightly from 7.4% of GDP to 7.5%. Wages are projected to rise 10% next year, which might signal a modest 2% real increase if the government's 8% inflation target is reached by year-end.

However, that spending is not being put under more pressure, in terms of a lower real terms increase if not nominal cuts, is largely due to the expected revenue gains. Failure to see the expected improvement in revenue will, as has been the case so far, require more spending cuts, which could prove politically difficult.

In terms of financing the deficit, the government will rely more on domestic financing. Domestic financing will amount to GHS27.9bn (5.6% of GDP), or cUS$4.6bn, although it is not clear how much of this is net new issuance. The problem is that shifting more to domestic debt, in part out of necessity as international markets are closed to Ghana, risks crowding out the private sector and could increase refinancing risks if the capacity of domestic investors (banks) to absorb new debt reaches its limit and/or interest rates have to rise or maturities shorten to maintain demand, at a time when the government's interest bill is already high.

Foreign financing is projected at US$1.5bn (1.8% of GDP). The government anticipates raising at least US$750mn on the international market, although it has given no timing (Ghana, typically, has come to the market in the spring), with the option to increase it by a further US$750mn for budget support and liability management.

Investors were hoping that the government would use the budget to demonstrate it is serious about bringing down the fiscal deficit and show its commitment to a stronger fiscal adjustment path than it has committed to so far, especially after the missed opportunity in the mid-year budget review in July.

But the budget paints a mixed picture. On the one hand, it shows a fairly strong, and front-loaded, fiscal consolidation, but to some extent it had to. A wider, unchanged, deficit path, would have been a disaster. Instead, the deficit declines faster than the IMF projects. To some extent, the government may be telling investors what it thinks they want to hear. On the other hand, the planned fiscal consolidation relies on revenue assumptions that may stretch credibility.

As such, the budget may fail to convince investors that the envisaged fiscal path is achievable. Questions about debt sustainability will remain, putting bond yields under pressure, threatening market access and, ultimately, increasing the chances of later crisis.

Indeed, as we said before, we may be at the point where there is no longer any budget that Ghana could credibly present that will be enough to restore debt sustainability and reassure investors. We've gone past the point of gradualism. But few will believe in ambitious fiscal consolidation based on over-optimistic assumptions.

The authorities, however, will argue they delivered on a sizeable deficit reduction before, over 2016-18, and can do so again.

We haven't seen enough in the budget to make us more confident about the fiscal outlook, but Ghana still has time to avert a deeper crisis. 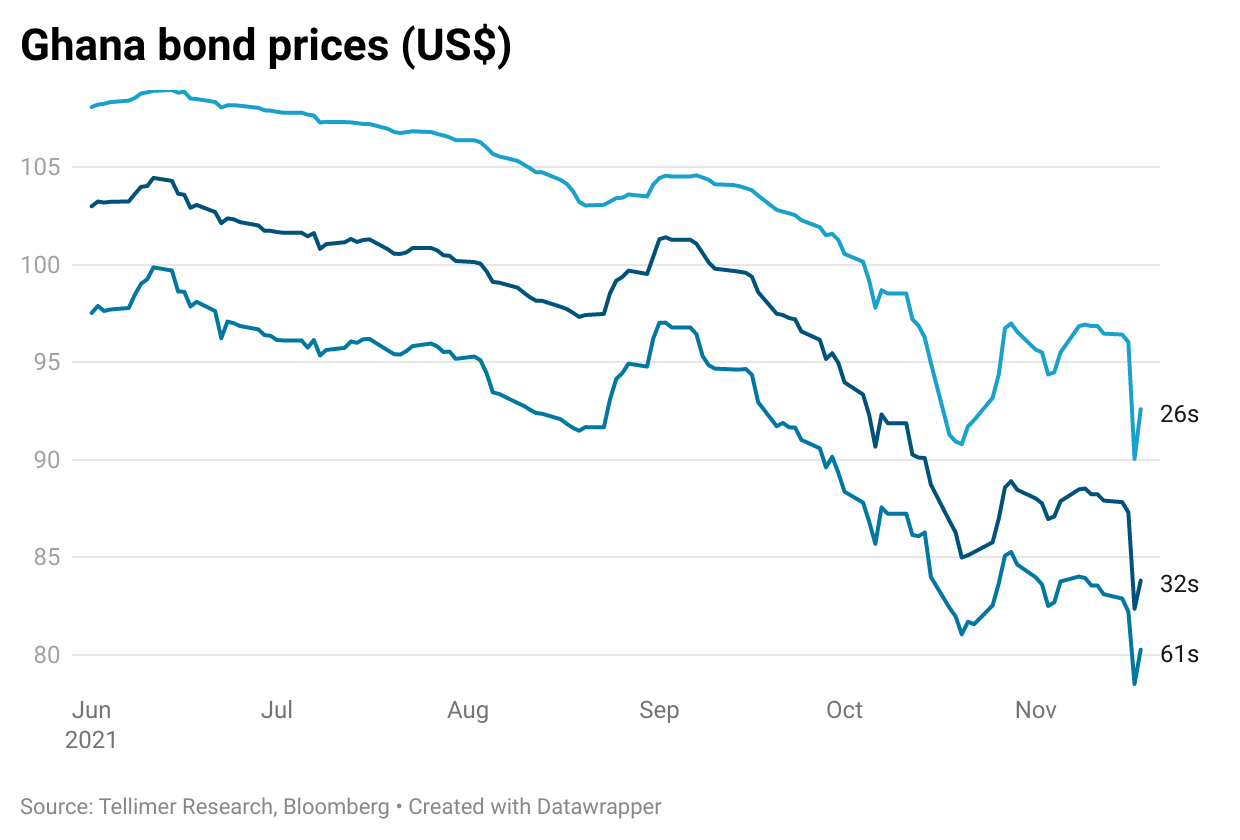