Georgian banks: Battening down the hatches 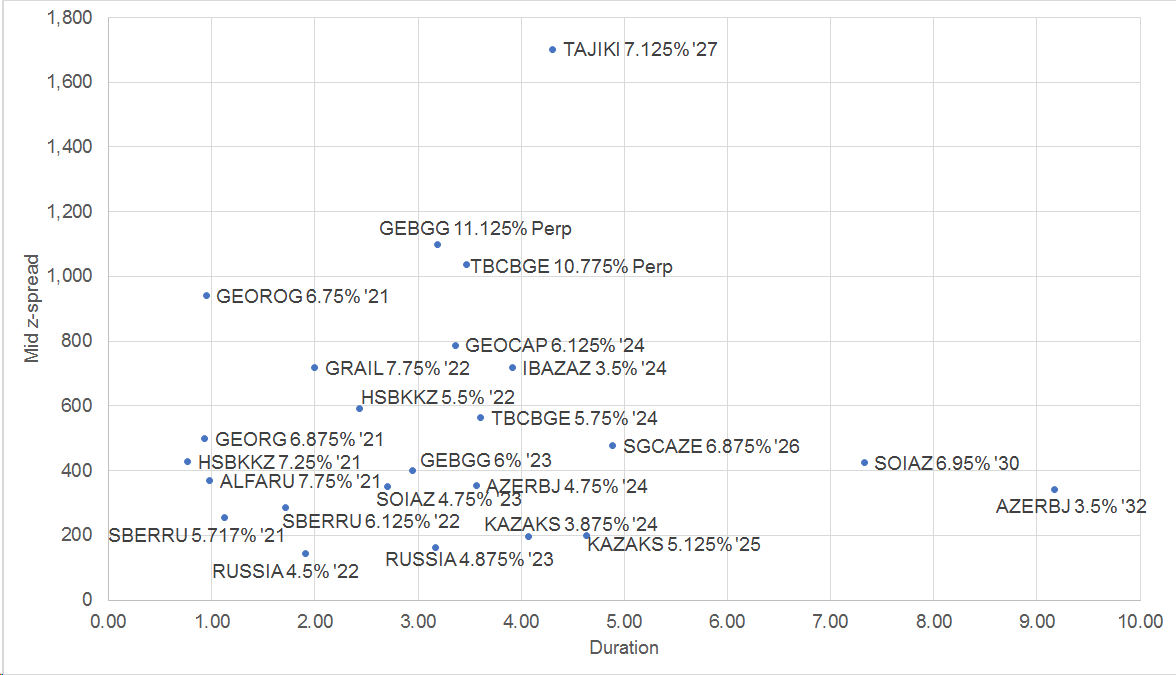 We estimate that the sum of reserves and shareholders’ equity covers almost 20% and 23% of gross loans at Bank of Georgia and TBC Bank, respectively. These are significant buffers, in our view. We believe steps taken by the regulator and the banks are positive. Less-stringent capital rules may prove key in these lenders’ battle against the impact of the COVID-19 pandemic. Changes have enabled these banks to book additional general provisions without breaching regulatory requirements. Added to this, we note that Bank of Georgia very recently drew down a second tranche of a subordinated syndicated loan, boosting capital.

Near-term maturities look manageable and we note that both banks have disclosed liquidity coverage ratios of over 100%. TBC Bank continues to secure new financing, even in the current market conditions. We expect Bank of Georgia to repay (rather than replace) a GEL-denominated Eurobond that matures in June this year. The relatively high LCR may explain why Bank of Georgia has decided against securing additional funding at the current time. 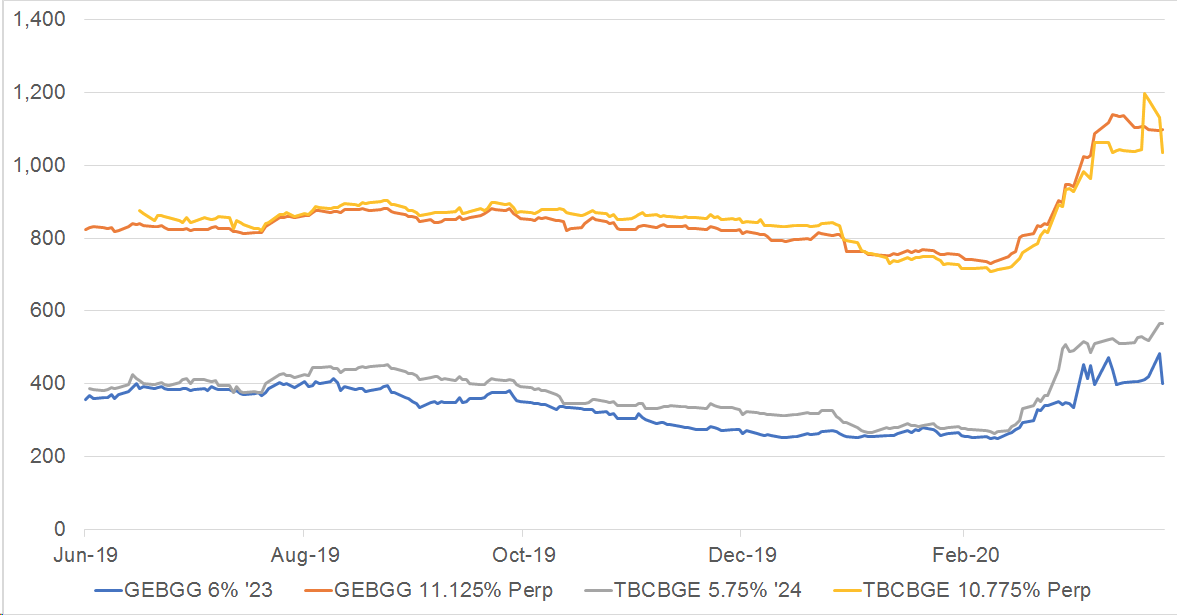 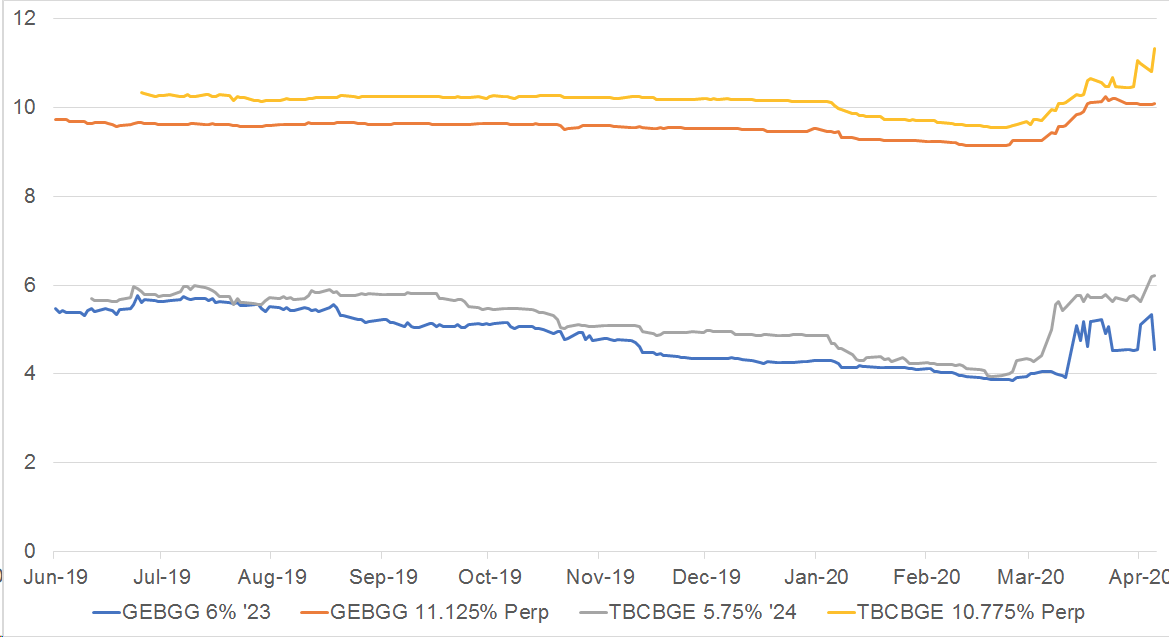 On capital, the capital conservation buffer (2.5% of risk-weighted-assets) is to be abolished, and the Pillar 2 currency-induced credit risk buffer is to be reduced by two-thirds. A concentration risk buffer will no longer be phased in from end-Q1 20, and other Pillar 2 requirements may be fully or partially removed. The NBG stated that banks "should not make dividend payments, stock repurchases, equity investments, increased management bonuses, or other such payments". Our understanding is that this does not apply to payments on perpetual securities, and the banks have emphasised to us that coupon payment skips are not under discussion.

On liquidity, although no significant changes have been made yet, the NBG may revise foreign and local currency liquidity coverage ratio requirements, as well as mandatory reserve requirements and eligibility criteria for repo securities. The NBG notes that it has "adequate foreign reserves" in addition to expected inflows from IFIs. According to TBC, government estimates suggest US$900mn-1.2bn and US$400mn may be disbursed to the government and NBG, respectively. This equates to 7-9% of Georgia’s GDP.

Added to this, stress test results are now to be submitted at the end of May, and the NBG will not impose sanctions on lenders that breach limits due to "external factors". Apart from anti-money laundering reviews, onsite audits have been suspended and most new regulatory requirements will not be enacted until September.

The regulator emphasised that the banking sector is healthy and stated that the sector has "sufficient buffers of capital and liquidity". The NBG also noted that the proportion of impaired loans is low, and profitability has been stable. Further, dollarisation has decreased as a result of restrictions put in place prior to the Covid-19 pandemic. This should put both lenders and borrowers in a better position to navigate current challenges.

The NBG disclosures came after various measures announced by the Georgian government in March, including increased VAT refunds and increased government capital expenditure. The government has also deferred income taxes in the tourism industry for four months and will subsidise interest payments for small and medium-sized hotels for six months. We also note that Georgia has imposed a nationwide quarantine and banned gatherings of more than three people since 31 March. Residents over 70 may only leave their homes for limited reasons. There is also a curfew in place.

Like other emerging market currencies, the GEL has come under some pressure, as the chart that follows shows. However, news of an extended fund facility arrangement from the IMF appears to have helped reverse some of this currency weakness, as has intervention by the NBG. This intervention suggests little appetite for a much weaker local currency. 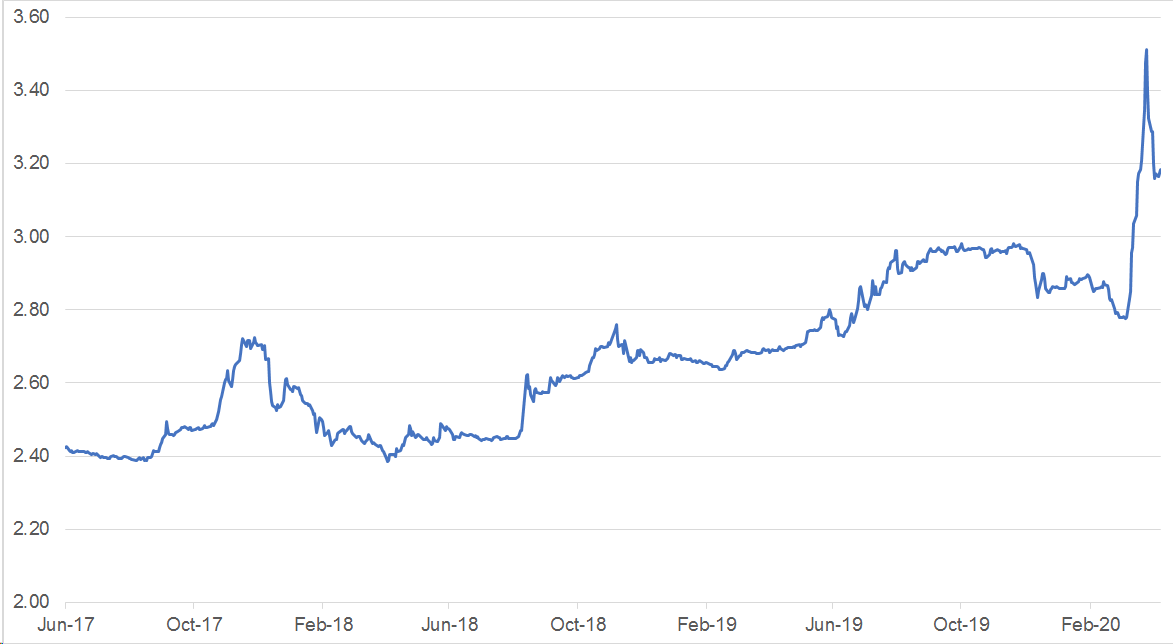 The table that follows shows key 2019 figures for Bank of Georgia and TBC Bank. Below, we highlight key aspects of these banks’ results, as well as our takeaways from the many disclosures from both lenders.