Reiterate Hold. There was no surprise in the significantly weaker H1 20 results reported by Genel. Lower oil prices, the temporary suspension of override payments and lower capex — which is an important driver of the cost oil component of revenues — combined to reduce revenues, EBITDA and cash flow. Over the previous years, Genel has accumulated substantial cash reserves, which will provide the necessary liquidity to cover a shortfall in H2 20 due to capex. The company continues to invest in Sarta, a new oilfield, aiming to start production in Q4 20. Management's decision to pay the final dividend for 2019 and interim dividends for 2020 will also take a toll on cash balance. However, according to our estimates and management guidance, the company will maintain a net cash position (cash>debt) at the end of the year. All of this supports our view that Genel is well positioned to weather lower oil prices and KRG payment risks. We reiterate our Hold recommendation on GENLLN 22s, indicated at a mid price of 99.8 (YTM: 10.8%), according to Bloomberg.

Revenues and EBITDA declined on the back of lower oil prices. Revenues were down 55% yoy at US$88mn and EBITDA declined 65% to US$54mn. According to company calculations, c60% (US$62mn) of the yoy revenue loss was due to lower oil prices and the rest was explained by lower entitlement barrels as a result of capex cuts, temporary suspension of override payments and lower gross production at Tawke. We do not expect prices to yield support to the top line in H2 20 as Brent is currently not far above the H1 20 average. Assuming gross production guidance for H2 20 disclosed previously by DNO still holds (DNO operates the Tawke and Peskhabir fields), Genel's revenues could fall further on the back of lower production. Having said that, a well intervention campaign launched after oil prices started to recover allowed production to increase by 15% in June posing upside risks to our conservative H2 20 forecast (see table below).

Positive free cash flow despite headwinds. A timely response to the changing market conditions allowed the company to cut costs and preserve cash. Transition to the new monthly payments schedule from April also helped to maintain a strong cash position. However, like other oil and gas companies operating in Kurdistan, Genel was not paid for oil shipped in November 2019-February 2020 with the balance due from the KRG amounting to US$121mn. There is no visibility as to when the overdue receivables will be settled. On the conference call, Genel management confirmed that that it was unlikely to happen before Brent reached US$50/bbl.

Strong liquidity underpinned by low costs and accumulated cash reserves. Genel had US$355mn cash on the balance sheet at the end of H1 20. Debt remained unchanged at US$300mn with 10% notes due 2022 being the only financial liability of the company. This translated into a net cash position, which management expects to maintain in FY 20. With a lower production in mind, we estimate Genel’s break-even oil price before capex at US$31/bbl. However, with half of H2 20 capex spent on a non-producing asset Sarta, the company is making significant investments, which will generate revenues after year-end. As a result, we expect Genel to have negative free cash flow in FY 20 as capex will take the break-even oil price to US$55/bbl in H2 20. Management's decision to continue paying dividends despite lower oil prices will reduce cash reserves by cUS$50mn in FY 20. 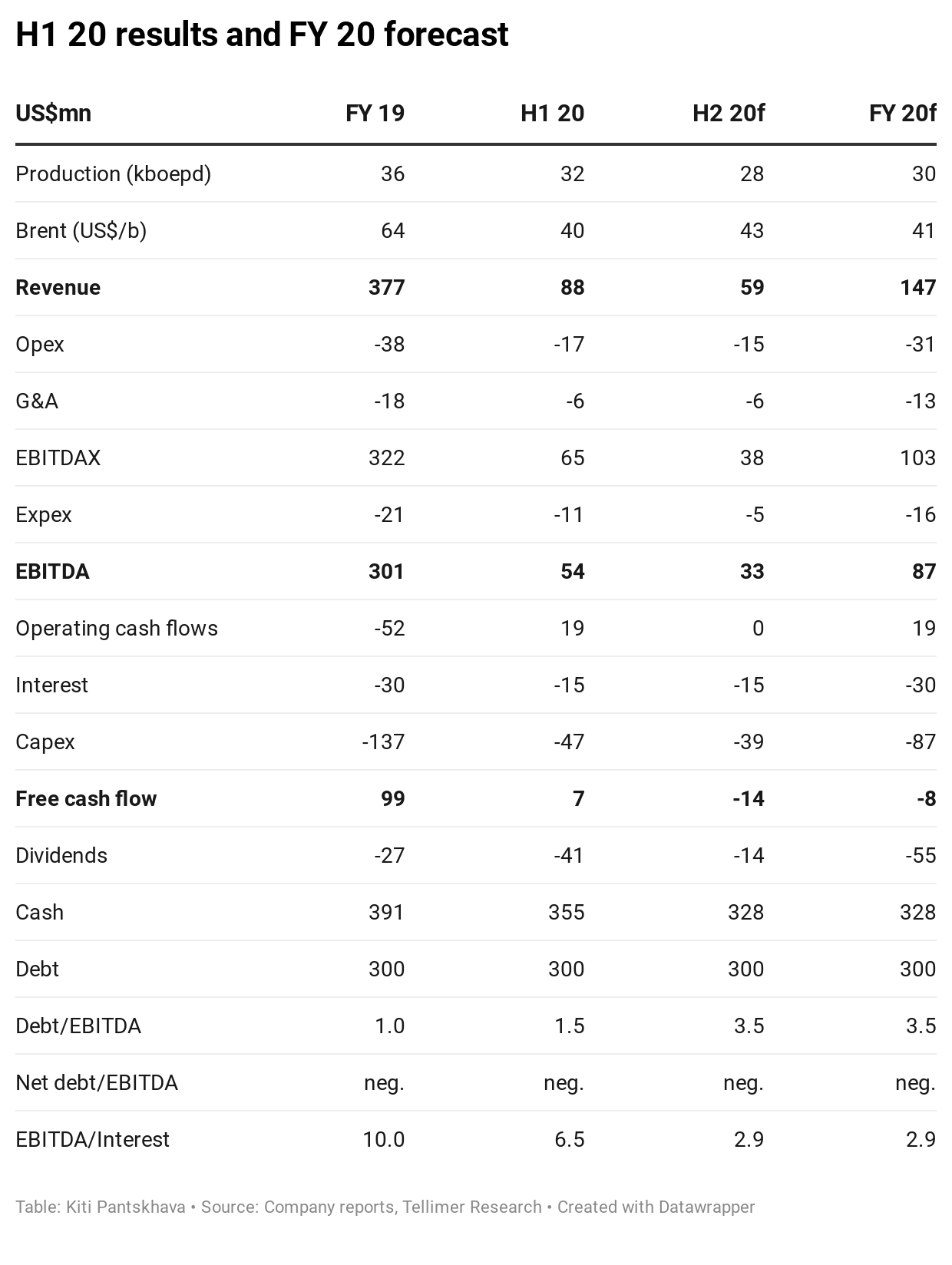