In this data flash, we take a look at real GDP growth in Q2 for selected EM/FM (yoy basis). The data therefore allow us to see the impact of Covid-19 on activity across a range of countries (see chart below). 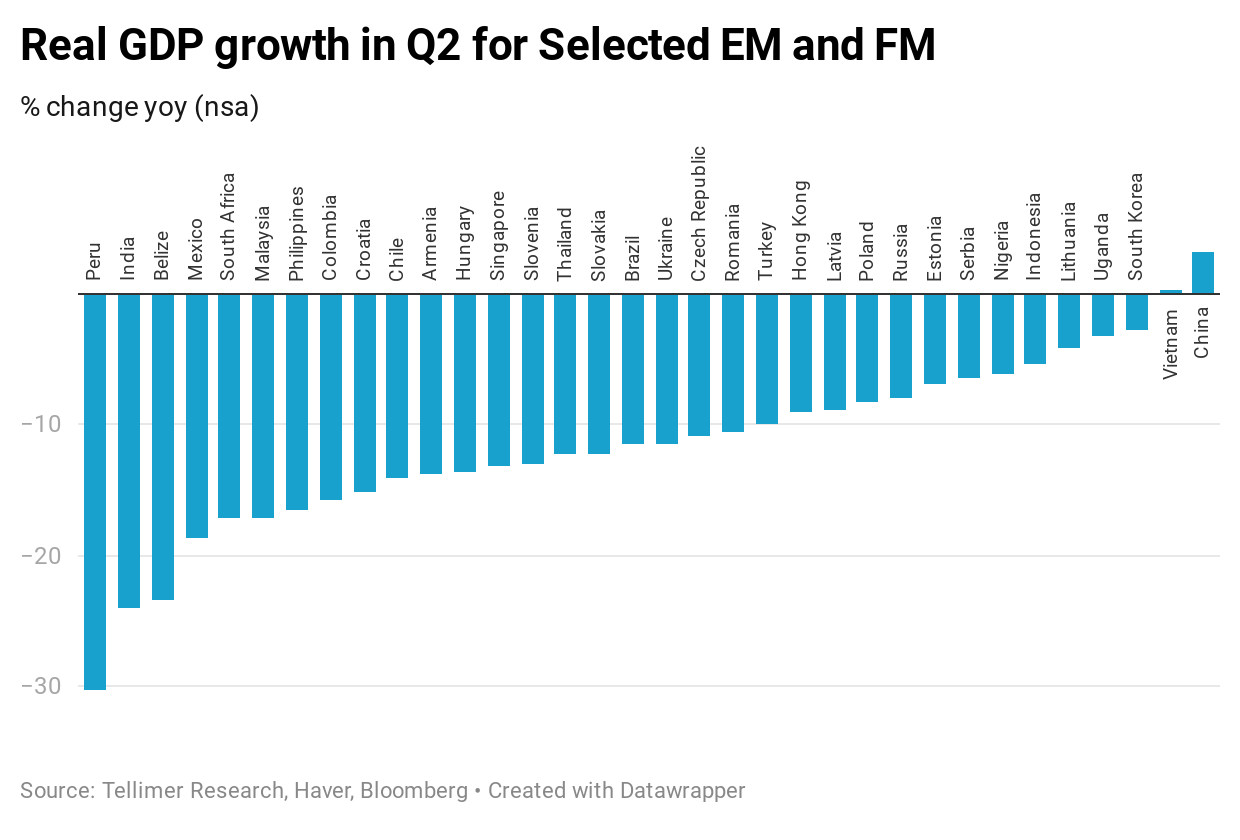 More and more countries have released GDP figures for Q2 in recent weeks, so it seems an opportune time to see what has happened across a wide sample. That the figures paint a largely depressing picture is no surprise. Perhaps the surprise is the depth of the collapse of activity, and its breadth — few countries seem to have escaped. In broad terms, the depth of the collapse in activity across the world has (and still is) mainly driven by the severity of lockdowns (their strictness and duration). And of course, it is against this challenging backdrop that macroeconomic policy decisions, and decisions on public health policy, have to be made.

GDP collapsed across the board in Q2, but by more in some places (Peru) than others (Vietnam). Peru has seen the biggest fall in activity in the world in yoy terms to our knowledge (excluding Macau), at -30.2%, followed by India (-23.9%), Belize (-23.3%), Mexico (-18.7%) and South Africa (-17.1%). The size of these falls is undoubtedly large, although to put it in some perspective, compares to -21.7% yoy in the UK (the steepest decline in the G7). On the other hand, Vietnam just about saw positive growth (0.4%). Across our sample of over 30 countries that have reported Q2 figures, the simple average is about -12% yoy (excluding China).

Many countries have still to release their Q2 GDP figures, especially those in SSA and Latin America and Caribbean, including Argentina (consensus is -18.5% yoy), Ecuador, Dominican Republic, Ghana (due next week), Kenya, Georgia, Sri Lanka and Saudi Arabia. We are also waiting for GDP from small island economies (to the extent that these are published), which will be especially informative for those tourism-dependent markets in the Caribbean and Pacific. If Belize’s experience is anything to go by, the omen’s are not good. Barbados, for example, reports that GDP fell 27% qoq in Q2 (no yoy figure, but we’d be surprised if it differed much from its qoq figure).

Indeed, as is well known now, the world economy is on track to see a deep recession this year, and likely worse than that seen during the global financial crisis. The IIF forecast global GDP falling by -3.8% this year compared to -0.4% in 2009. Fitch expects world GDP to fall by 4.4% this year, compared to about -2% in 2009, although its September global forecast shows a modest 20bps improvement compared to its June forecast. That activity appeared to rebound in Q3 in some countries, according to retail sales and PMI data, is encouraging. However the renewed rise in the number of Covid infections (second wave) now being seen across Europe, and elsewhere, as we head into the Northern winter raises the risk of further local, or even national, lockdowns that could sap activity going forward and undermine the still tentative global economic recovery.