Sequential recovery is halted. Gap recorded a 36.8% y/y reduction in passengers, as a result of the pandemic outbreak at the beginning of the year and restrictive travel measures by the US and Canada. This was partially offset by higher fares approved in the 2020-2024 Master Development Programs, moderating the contraction in the sum of aeronautical and non-aeronautical revenues by -34.7% to MXN 2.7 billion, in line with estimates. This, together with a higher weight of fixed expenses in both Mexico and Jamaica, resulted in a 37.8% y/y decline in EBITDA to MXN 1.8 billion, despite the efforts implemented by the company to streamline operations, which led to a 3.2pp decline in the respective margin, excluding accounting changes (with no impact on EBITDA), to 65.0% (vs. 65.8%e). Finally, the company recorded a 56.1% reduction in comprehensive income attributable to controlling interest to MXN 1.3 billion, mainly due to the operating decrease and a lower FX benefit, and continued with a healthy financial position (ND/EBITDA of 2.1x). Importantly, Gap remains focused on resuming growth and continuing with initiatives to control expenses, which together with improved demand expectations going forward, we believe will be reflected in solid earnings momentum.

Although in January and February Gap's passenger traffic came in below estimates, in March it outperformed expectations, which supports the expectation of better demand performance going forward. This takes on added strength, considering the announcements by several airlines that they will be operating a larger fleet for the year. We also mentioned that the group is constantly seeking to make its operations more efficient, which would translate into significant growth and higher profitability. It should be noted that the progress we foresee for the company is subject to the recovery pace in the sector, and in turn, to the vaccination process, for which we will remain attentive.

After incorporating the results (which came in line), our estimates remained virtually unchanged. For total passenger traffic, we project a 36.0% y/y increase (vs. 35.3%e previously), comprised of passenger growth in Mexico of 37.8% and 15% on average at Jamaica, MBJ and Kingston airports. We note that the exposure of the airport network operated by Gap in Mexico to Volaris could continue to favor good passenger gains, given the favorable outlook for the airline. Accordingly, we anticipate a 42.6% y/y rise in total revenues to MXN 16.9 billion, as well as a 35.8% y/y increase in operating revenues (very similar to the previous estimate) to MXN 13.1 billion, supported by higher tariffs approved in the revision of the 2020-2024 Master Development Program and partially offset by an appreciation of the peso-dollar FX rate. Thus, aeronautical revenues would grow 37.6% y/y, while non-aeronautical revenues would climb 30.7%, to a lesser extent due to improved performance in 2020.

In EBITDA, we anticipate a 52.9% increase to MXN 8.9 billion, with a solid expansion in its respective margin (excluding construction services) of 7.6pp to 67.7% (vs. 67.5%e previously), driven by the positive effect of economies of scale generation, taking into account the fixed proportion in most of the cost and expense structure, as well as the initiatives to control/reduce expenses. We estimate a mid-single-digit margin improvement in the Mexican operations and low-single-digit margin growth in the MBJ and Kingston operations.

We forecast a 100.7% increase in majority net income to MXN 4.3 billion, mainly due to higher operating income. Finally, we estimate that the company will continue to have a solid balance sheet, with a year-end ND/EBITDA ratio of 1.7x.

An important and favorable component is the return of distributions to shareholders, which would be MXN 3.81 per share, with a 1.8% yield at current prices. In addition to the above, the group approved a cancellation of shares held in treasury, equivalent to 6.3% of the total, which we are incorporating in our valuation model.

Through the discounted cash flow (DCF) valuation methodology and by updating the number of shares accordingly, we raise our target price for Gap shares to MXN 245.00 from MXN 233.00 per share, which represents a 2021e FV/EBITDA multiple of 16.2x, down from the current 25.6x, but above the national sector average of 14.0x. It is worth mentioning that, historically, the company has traded above the average of its domestic peers, which in our opinion is the result of high profitability, in addition to diversification by type of airport and operations in general, also taking into account the expansion outside of Mexico. In our view, the higher valuations are supported by the prospects of a significant recovery by 2021, which would translate into a significant multiple reduction. Taking into account the above and our potential 18.1% PT return (including the estimated dividend yield), we upgrade our recommendation to Buy from Hold. 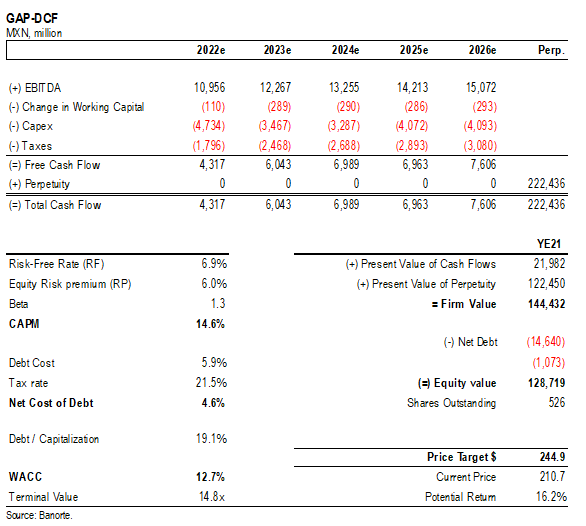 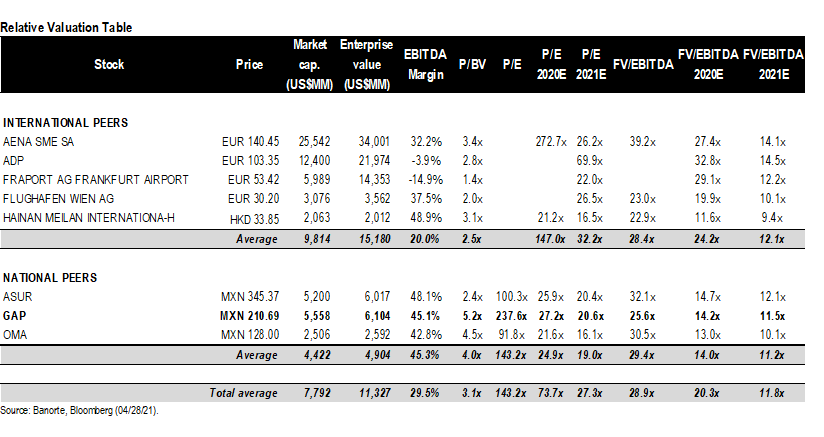