The final communique from the G7 meeting, held in Cornwall, UK, over the weekend, is noteworthy in a number of regards. At some 14,000 words, we think it may be by far the longest G7 statement since Japan in 2016. No doubt there is a lot to say after the pandemic, both in terms of global economic policy, international relations, and climate change, and leaders had to make up for a lost year after last year's Summit in the US was cancelled. If words are proportional to action, this G7 was a huge success (but does anyone remember the G7's Rapid Response Mechanism (RRM) initiative introduced at the Canadian Summit in 2018?).

Second, we think it may be the first G7 statement to refer to space. "Future frontiers of the global economy and society – from cyber space to outer space – will determine the future prosperity and wellbeing of people all over the world in the decades ahead." This is perhaps mindful of the new space race and growing interaction, and competition, between governments, and between governments and companies, and the increasing role of the private sector, led by billionaire businessmen.

Back on earth, G7 Leaders also lent their support to one concrete policy proposal, the SDR allocation, thereby reiterating the agreement given earlier by G7 Finance Ministers and Central Bank Governors on 5 June for the IMF to undertake a US$650bn general SDR allocation, urging implementation by the end of August 2021, and "accompanied by transparency and accountability measures". Of course, this is nothing new, and follows the G20's endorsement of such plans ahead of the IMF/WB Spring Meetings in April.

What is new, or rather newer, is that G7 Leaders also endorsed the principle of rich nations directing some of their SDRs to poor countries, and the scaling-up of financing to support low income countries, with the aim of reaching US$100bn. Whilst the G7 communique doesn't say anything on the timing of implementing this leg of the SDR initiative, October is generally understood to be the target.

In turn, the IMF Managing Director Kristalina Georgieva welcomed the G7's support for a new SDR allocation and its willingness to consider the voluntary channelling of SDRs and/or budget loans in her statement yesterday following the conclusion of the summit. The IMF MD noted that she will continue to work with the membership on how to get this done. Speaking at a Global Health Summit last week, Georgieva expected the Board of Governors to vote on the US$650bn SDR allocation by mid-August. Before then, the SDR allocation is expected to go to the IMF's Executive Board for approval this month (although there is no board date as yet for this).

Importantly, the IMF will also provide guidance on how countries should use their SDRs. In her comments last week, the IMF MD stated that countries in distress should still restructure their debt, through the Common Framework, rather than use SDRs to pay, and rejected the criticism that SDRs would be used by developing countries to pay off their debts to China (presumably under Chinese pressure). The IMF is aiming to increase transparency over how countries use their SDRs, and no doubt the G7 is responding to such concerns with the explicit mention of "transparency and accountability measures" in its statement.

Crucially, the G7 statement confirms wider international political support for redirecting SDRs from rich countries that don't need it to poor countries that do. This follows recognition that of the US$650bn global SDR allocation, only US$33.5bn (c5%) would go to Africa for example; note, according to our calculations, it is actually US$33.5bn, whereas US$33bn is widely reported in the media, and here "Africa" includes North Africa as well as Sub-Saharan Africa (SSA). We calculate, of this, only US$22.9bn – about two thirds – goes to SSA.

The issue of redirecting excess SDRs has been an emerging policy issue since the Spring Meetings, and gained momentum after President Macron called for a commitment from rich nations to reallocate part of their SDRs to Africa at a Financing for Africa Summit he hosted in France in May. As a first step, he called for rich countries to mobilise US$100bn of their SDR allocations for Africa by October, thereby seeking to triple the US$33bn that would go to Africa (we don't know why tripling the SDR allocation is the magic number, probably round-numberology).

However, it is not clear how this will work, who will be providing it (among rich nations), to whom and how much will be mobilised. The SDR allocation will amount to US$282bn to G7 members alone, according to our calculations, so redirecting around only a third of that seems feasible, and extending the number of countries that want to chip in (eg across Advanced Europe or the OECD) will make it easier still. Nor is it clear who the intended recipients are. France said Africa, but the IMF have said low income countries too, and the G7 mentioned the countries most in need, especially in Africa. Nevertheless, every little helps.

Still, if we assume it's US$100bn to Africa, that is a very significant number. If, of this, about a third comes from the new SDR allocation, that's an additional two-thirds (US$67bn) of financing (of which, two-thirds, about US$45bn goes to SSA). It means each country gets 3x its allocation.

Take Nigeria. If the US$100bn is allocated to African countries pro rata based on quota, that’s US$10bn altogether (3 times its US$3.3bn share from the initial new allocation) from this combined SDR initiative. Similarly, it's US$4bn for Zambia and US$3bn each for Angola and Ghana.

To put this in context, US$100bn is just short of the total amount the IMF had lent to its members by early April under pandemic-related lending and even if "only" two-thirds of it goes to SSA, it would still dwarf the IMF's US$20bn in pandemic-related lending to SSA (as of April) and represents about three quarters of the total stock of SSA (ex South Africa) eurobonds (which we calculate to be US$63.6bn notional outstanding).

But this is speculation, as we don't know yet how this is going to work.

In the meantime, we update our analysis on which countries stand to gain the most from an SDR allocation following our previous assessment in November (see Revisiting the IMF SDR allocation — The time is right, dated 13 November 2020). As we argued before, it's not just the absolute dollar amount that determines who are the main beneficiaries of the SDR allocation, which is given by the size of a country's IMF quota (which loosely correlates with its US$ GDP), but also the amount each country gets as a percentage of its existing foreign exchange reserves. As we argued before, the main beneficiaries are those whose IMF quota is a bigger share of its reserves.

The main change since our earlier analysis is confirmation that the general allocation will amount to US$650bn, whereas we undertook our previous analysis on the basis of a generic US$500bn allocation, long before there was even a hint of an international support for a new allocation. Reserve levels will also have changed since then. We mainly use IMF IFS data, which shows reserves for most countries to April 2021 (we use reserves excluding gold), but also use national central banks where necessary.

That said, our results today are not that different from before given the US$500bn in our generic allocation is not wildly different from US$650bn. There are, however, a couple of marked changes (notably Ecuador and Tajikistan), where reserves are much higher than they were at the time of our initial analysis, which means consequently they now stand to benefit less in terms of the impact of the SDR allocation as a share of reserves.

We find the main beneficiaries of the (initial) SDR allocation (defined as SDR allocation as a share of reserves) are Zambia, Venezuela, Suriname, Bahrain, Ecuador, Belarus, Gabon and Republic of Congo, among emerging market and developing countries with eurobonds, which is a similar list to what we had before. Zambia (as before) and Venezuela are by far the biggest winners, due mainly to the fact that their reserves are so low. We say initial here as this is before the impact of any scaling up; the impact of scaling up, if done in proportion to quota, will just be a scalar multiple of the SDR allocation, changing the dollar amounts but preserving the relative order. 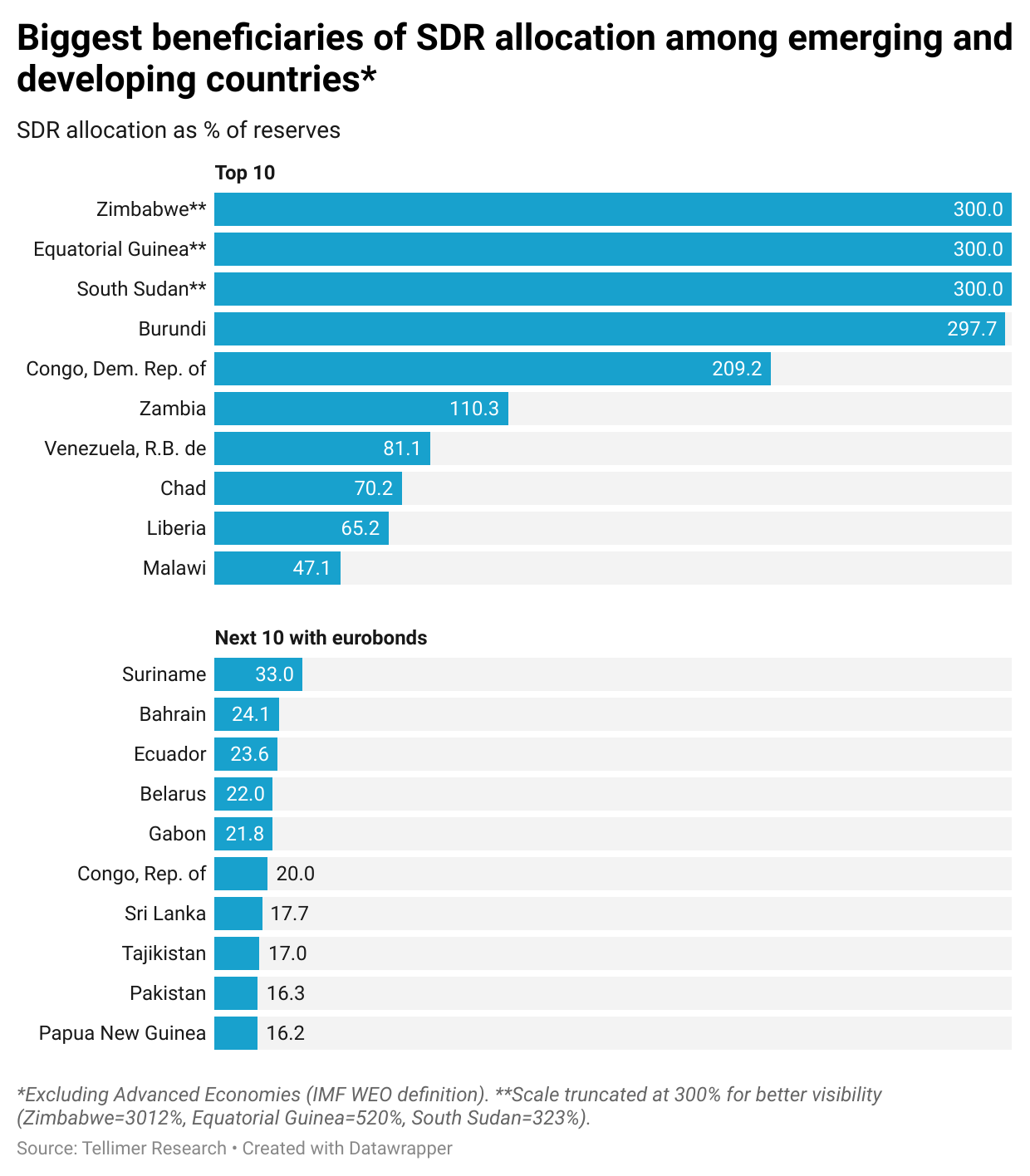 Below, we also present our calculations for the size of the SDR allocation in dollar terms and as a share of reserves for a selection of emerging and frontier countries with eurobonds by region. 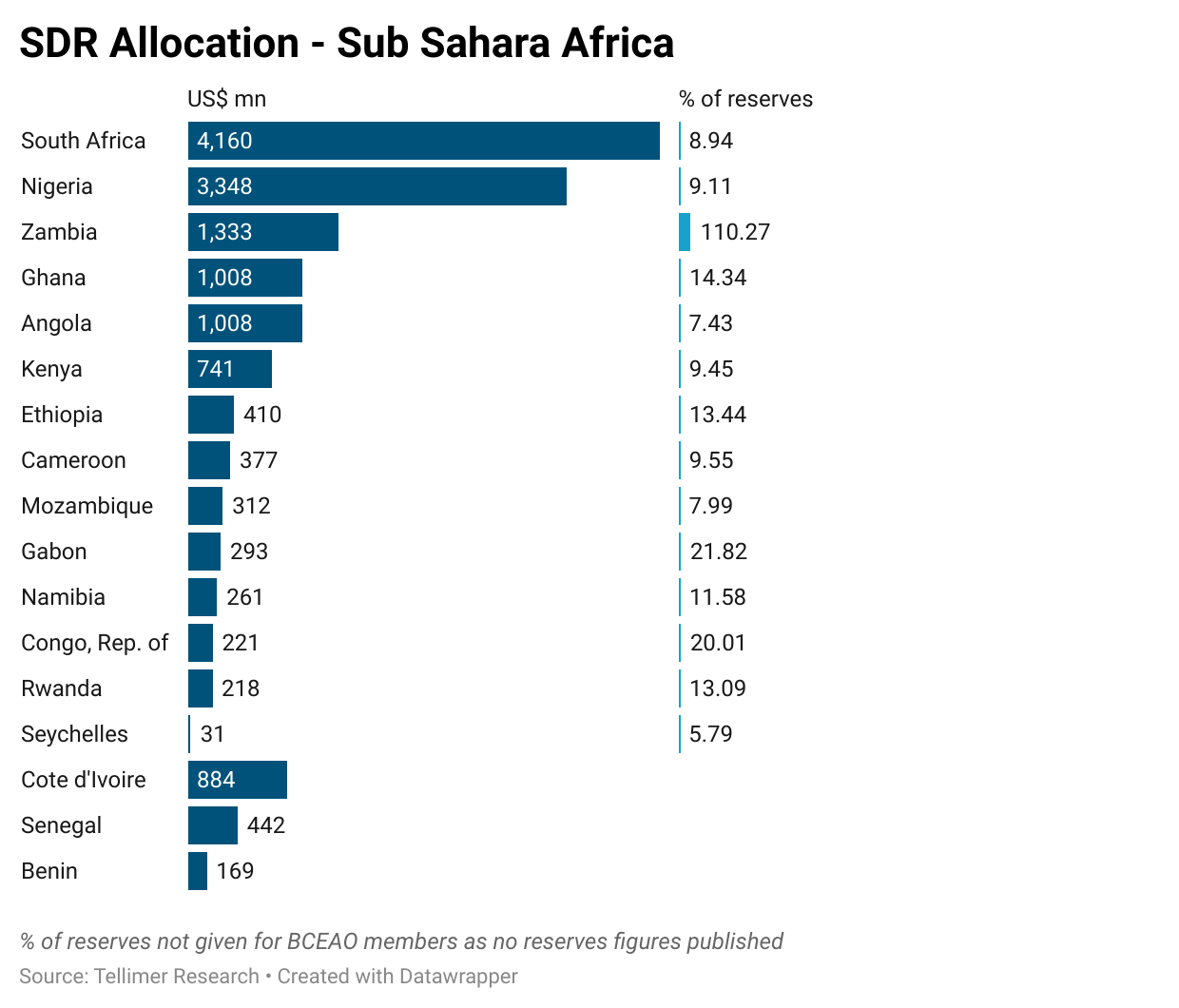 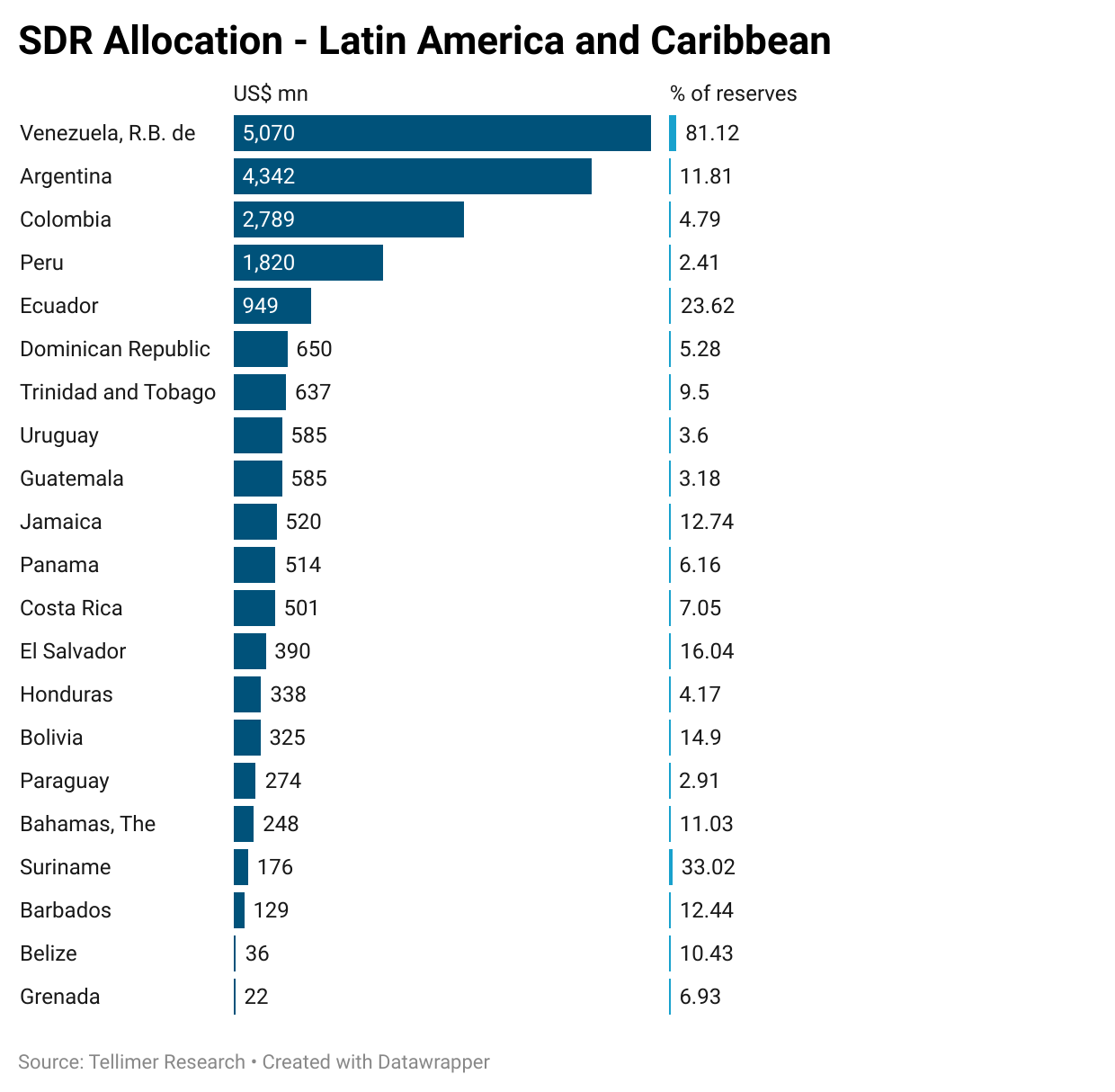 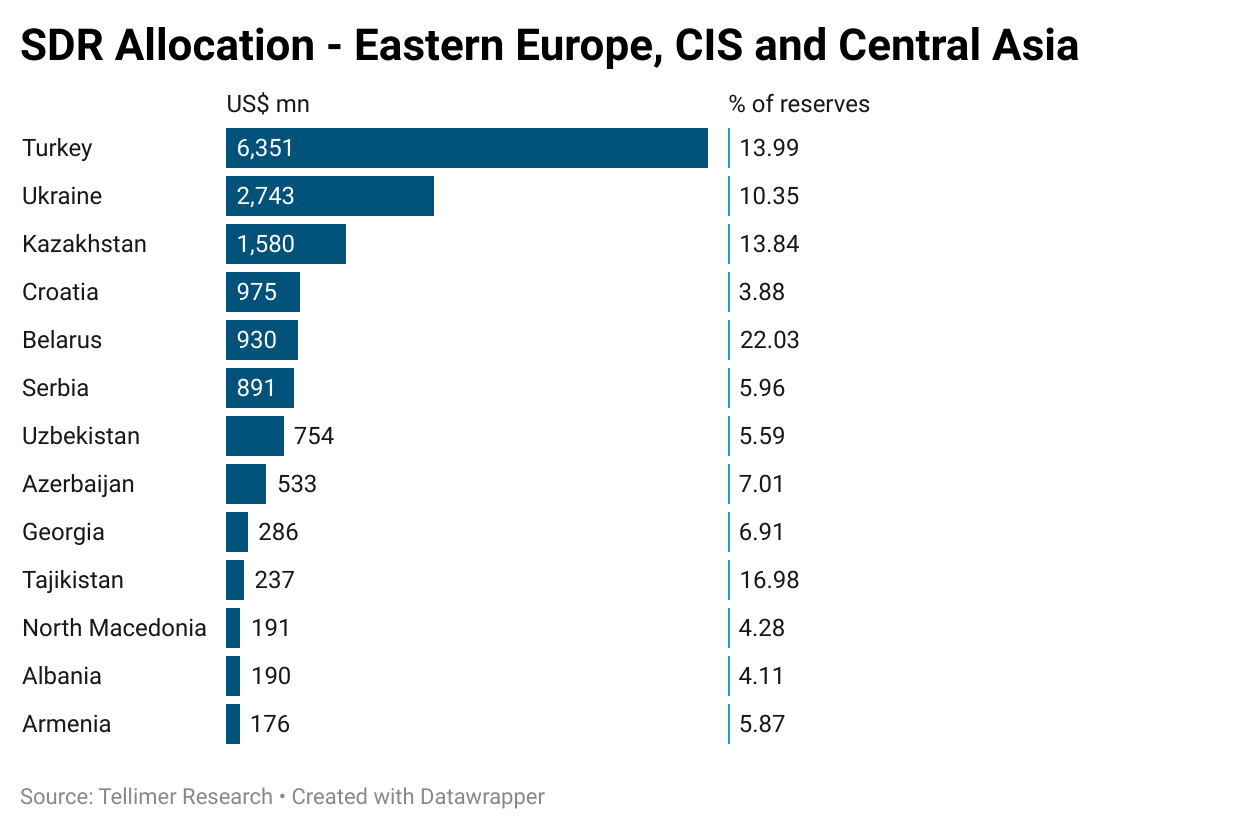 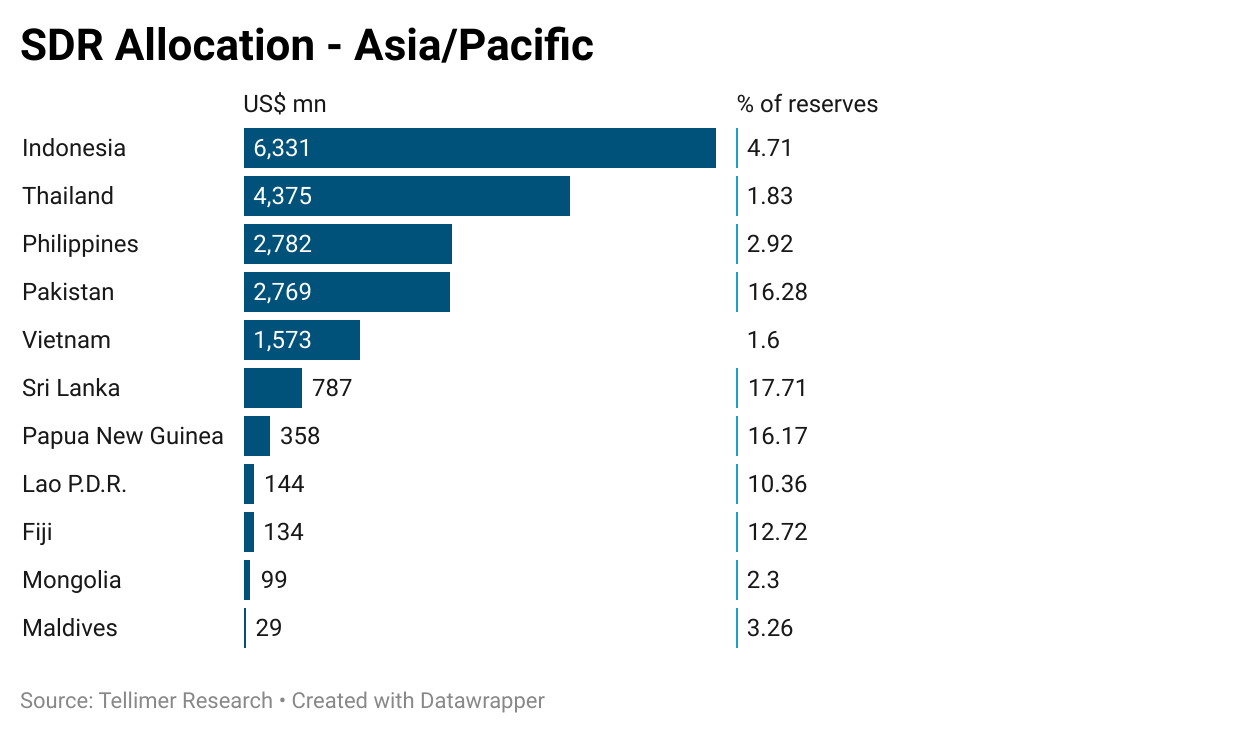 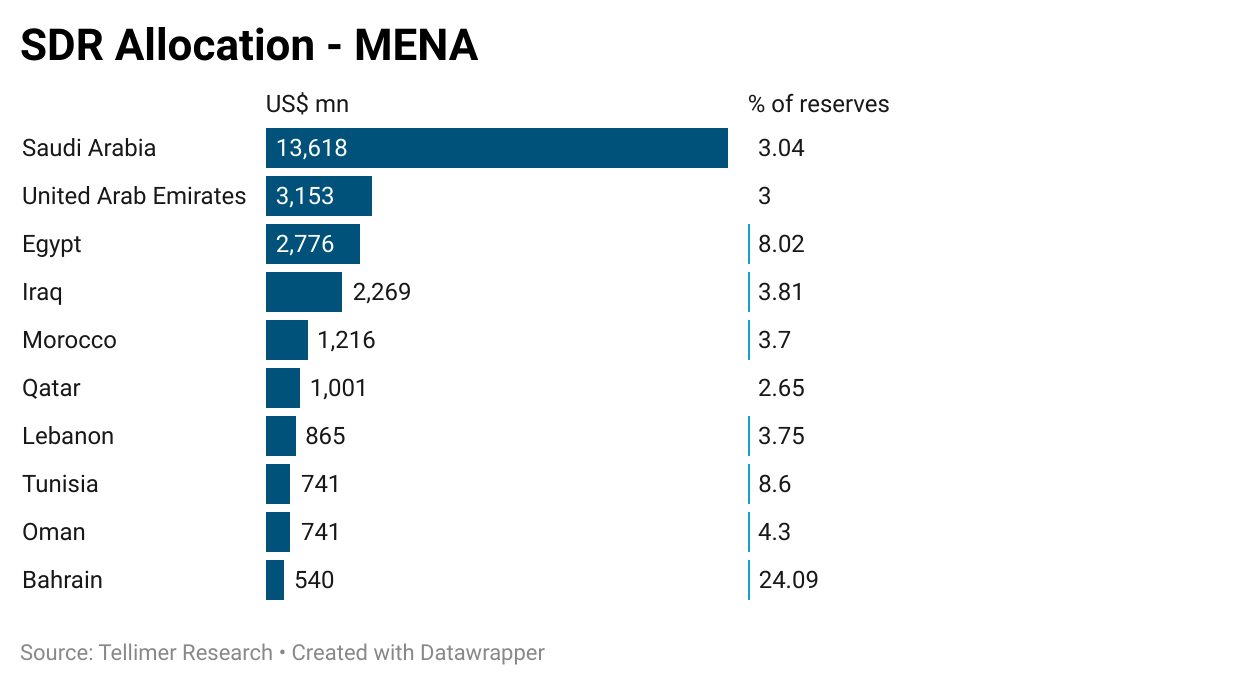 Although the SDR allocation is well trailed and something we've highlighted in our own country research (eg Ukraine, Angola and Zambia), it is hard to say how much impact it has had on bond pricing. Other things equal, one would expect it to lower yields (or spreads). The market should be aware of it and factored it in, in terms of the additional support it provides to FX reserves and external liquidity. In addition, while a more recent initiative, the potential impact from redirecting excess SDRs to poor countries, if this is to the tune of US$100bn, is enormous. But while the international political commitment is there, perhaps it is still too vague for markets to digest and quantify at this stage.

Our initial assessment is that potentially, the market hasn't fully discounted this. We look at the impact of the SDR allocation on SSA bond yields (external bonds). We compare the SDR allocation for each country with the change in its bond yield since the end of January (ie just before the new US administration signalled its willingness to consider a SDR allocation), although we recognise this is a quick and dirty way to try to identify any relationship, and are also comparing yield movements in bonds with different maturities. And of course, other factors will also explain bond yield movements, which would need to be isolated to come up with more precise conclusions. 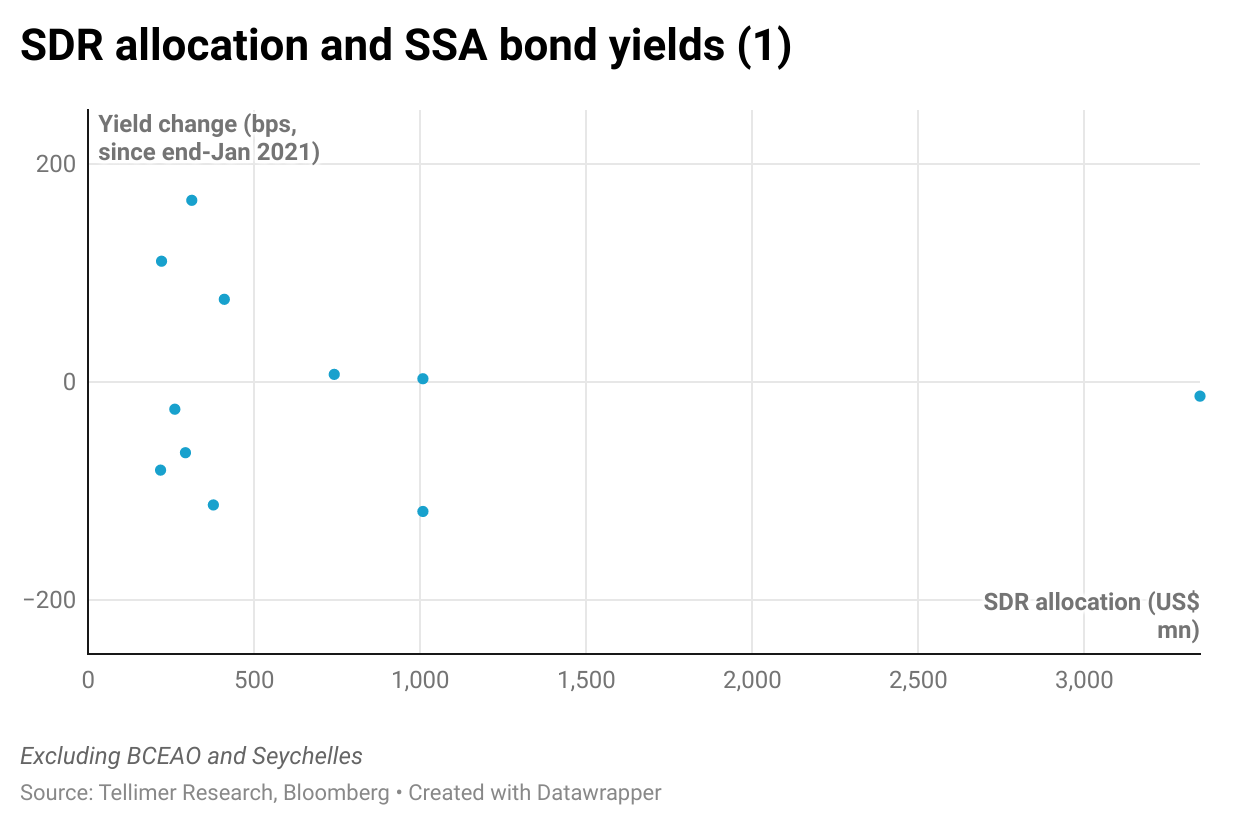 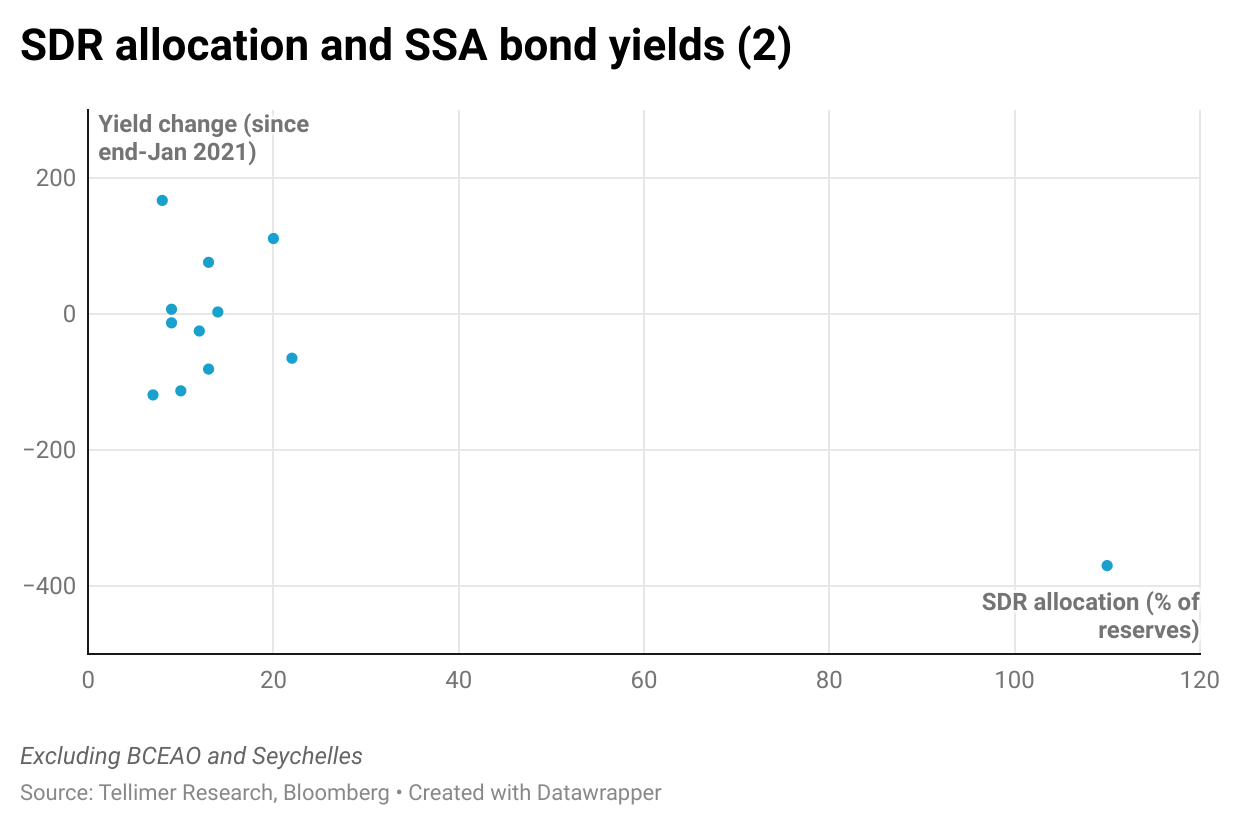