Capital expenditure declined 3.2% yoy to KES34.96bn, slightly below the guidance of KES35-38bn, and capex intensity declined from 13.8% to 13.2%, but the company intends to ramp up in the coming year. Looking at the half-year like-for-like performance, it shows signs of recovery in M-PESA revenue and accelerated growth in fixed services revenue. 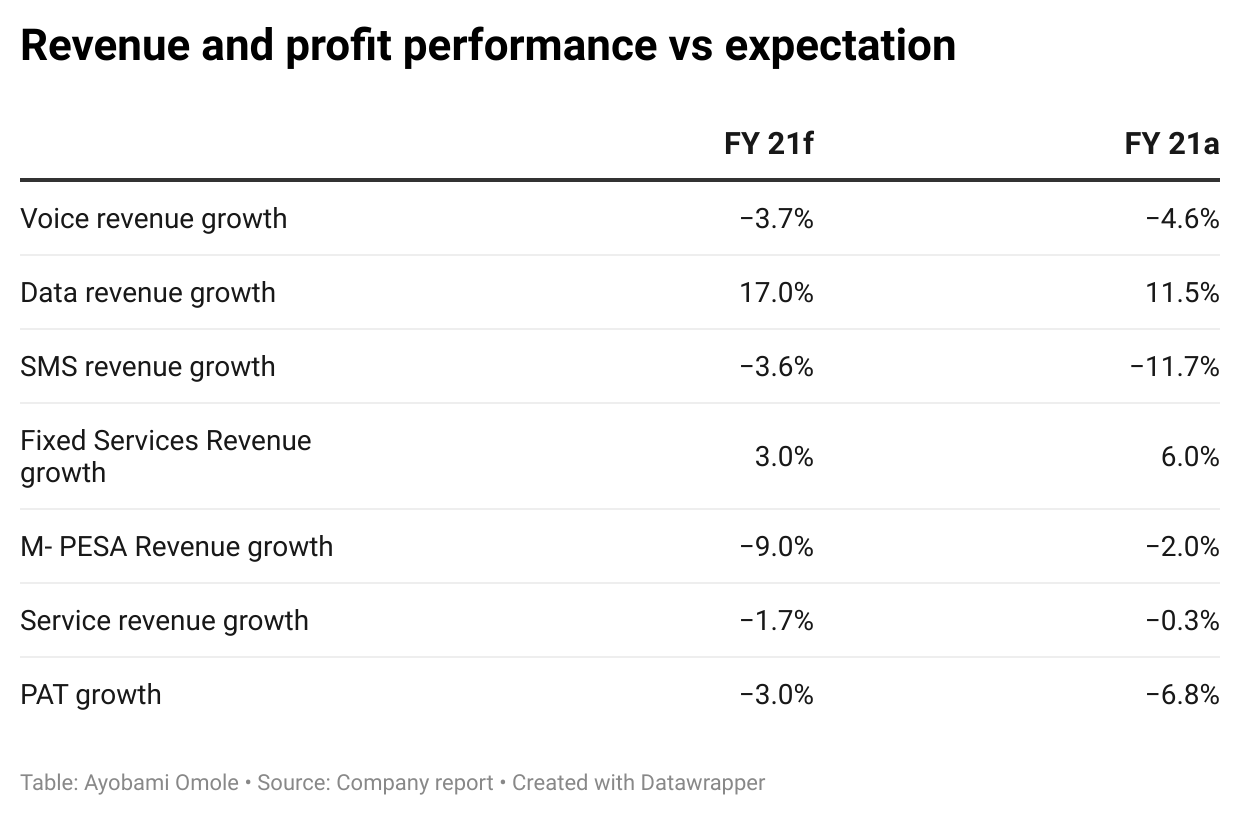 M-PESA, largest slice of the pie

M-PESA’s revenue declined by 2.1% yoy in FY 21 despite 29.8% yoy growth in transaction volume and 58.2% yoy growth in transaction value. The pulldown in revenue is heavily tilted towards H1 (-14.5%) while H2 grew by 10.1%. The suspension of charges on the bank-to-mobile wallet, mobile-to-bank wallet, and P2P transfers below KES1,000 were responsible for the strong decline seen in H1. Although charges have resumed on P2P transactions, Safaricom reduced transaction costs across the board and has kept bank-to-mobile wallet and mobile wallet-to-bank transfers free.

The free bank-to-mobile wallet and mobile wallet-to-bank transfers were largely responsible for the growth in volume and value of transactions, as customers took advantage of the arbitrage opportunity to deposit through M-PESA and transfer to their bank for free. This was responsible for 18.4% growth in commission paid to agents.

M-PESA revenue now makes up the largest share (c33%) of Safaricom’s revenue, as voice revenue continues to decline. We believe that the growth in transaction volume will offset the reduction in fees and set M-PESA revenue on a growth path once again in FY22. The growth prospect and the continued product development effort will keep M-PESA as Safaricom’s strongest revenue line. 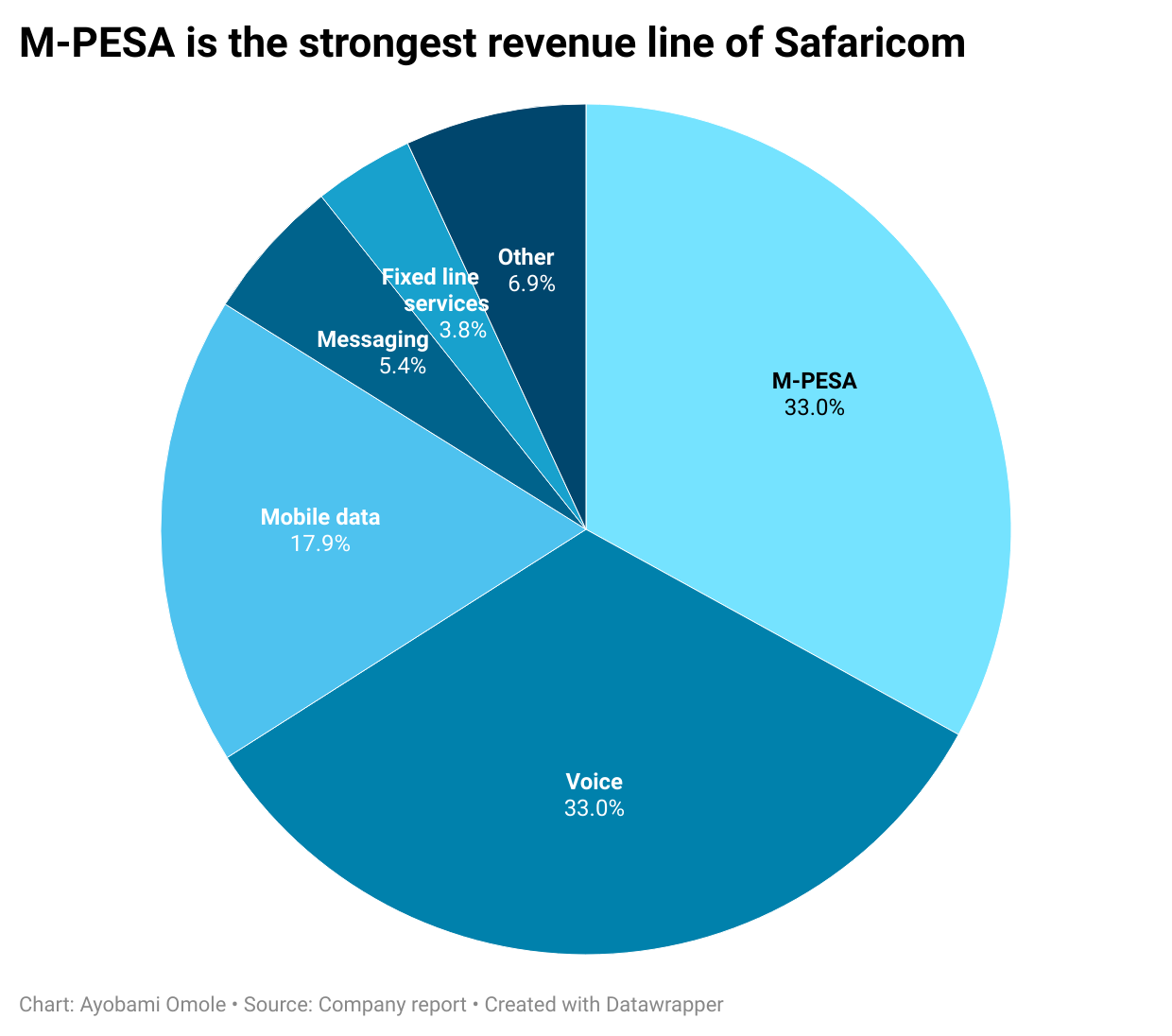 Data revenue grew by 11.5% yoy to KES44.7bn, active customers grew by 9.9% and ARPU grew by 3.7% yoy. Average GB per chargeable user increased by 32.7% but rates declined 21.9% yoy. Despite the competitive pressure on pricing, there is still more than enough room for data revenue growth.

As it stands, Safaricom’s 4G population coverage in Kenya is c94% but uptake is still low, with 4G making up just 42% of broadband subscriptions in Kenya. According to GSMA, 4G makes up over 50% of global internet connections and in emerging markets like India and China it is as high as 56% and 80% respectively. This shows there is still more than enough room for growth in 4G uptake in Kenya.

As mentioned in our earlier reserach, 5G is still only in its test phase, with an expected rollout to 150 sites across the country. As such, the impact on data revenue is expected to be muted in the meantime.

The cannibalisation of SMS and voice will also continue. The migration of users from 2G to advanced technology also means the transfer of revenue from SMS and Voice to Data, due to the growing adoption and convenience of OTT services.

From the industry report, Safaricom is now the market leader for fixed broadband subscriptions. Fixed services revenue grew by 5%, largely driven by growth in the Fibre to the home (FTTH) segment. FTTH revenue grew by 31.5% in FY 21 due to the change to working and schooling from home as a result of Covid. Safaricom plans to continue to develop capacity through increased capital expenditure in the fixed services segment. We believe that Safaricom will continue to maintain market leadership in this segment in the medium term as well.

Safaricom has a series of initiatives in the works with the intention to service various customer segments effectively and increase monetisation. In January, the company launched M-PESA bill management services for businesses. This is in addition to the super app for merchants which it intends to launch in a few months. Recently, in line with its global expansion effort, Safaricom is exploring enabling M-PESA on Amazon's international ecommerce platform.

The telco is also capturing the digitally excluded population through its agent network, which it intends to use to convert non-internet users to internet users as well. Safaricom’s agent network grew by 43% yoy to c248,000. The efforts continue to strengthen Safaricom’s foothold in the Kenyan economy and expand its capacity to monetise.

In summary, we expect the following factors to determine performance in the coming year:

We reiterate our Hold recommendation while we await the full annual report.

Ethiopia has been held back by its telecoms monopoly, but change is coming