Access Bank recently released its audited reports and held an investor call to discuss its numbers and outlook for FY 21. The group’s results showed growth in profits, retail banking metrics and improved asset quality, although profitability ratios declined, and capital and liquidity ratios closed the year lower compared to Q3 20.

The company’s ambition to operate across 22 countries (currently 13) remains intact, with recent regulatory approvals having been obtained to acquire a South African bank. Furthermore, the new holding company (holdco) structure is expected to be in place by Q4 21. In this report, we discuss our views of the group’s financial performance, and the key takeaways from its investor call. We reiterate our Buy recommendation with our unchanged target price of NGN12.0 offering an expected total return of 55%.

Access Bank's FY 20 net attributable profit increased 13% yoy, to NGN105bn. Using the Bloomberg consensus estimate as proxy, the group’s profit figure underperformed market expectations by 15%. However, it outperformed our estimate by 17%. We had expected the group’s short US$ position (-US$110mn as at FY 20) to limit trading and FX gains given the multiple currency devaluations in 2020 and for the group to also record higher loan loss provisions induced by the pandemic.

However, the better-than-expected profit growth was due to a 743% yoy increase in trading income, as the group recorded strong fair value gains on its financial instruments and lower net FX revaluation losses compared to FY 19. Also, e-banking fees were up (+56% yoy), showing the benefits of its enlarged retail banking franchise attributable to the Diamond Bank merger. The group’s profitability ratios weakened, with ROE down 1.6ppts yoy to 15.6% and ROA down 0.1ppts yoy to 1.3%. A final dividend of NGN0.55/share (up 38% yoy), translates into a dividend yield of 7% at the current share price. 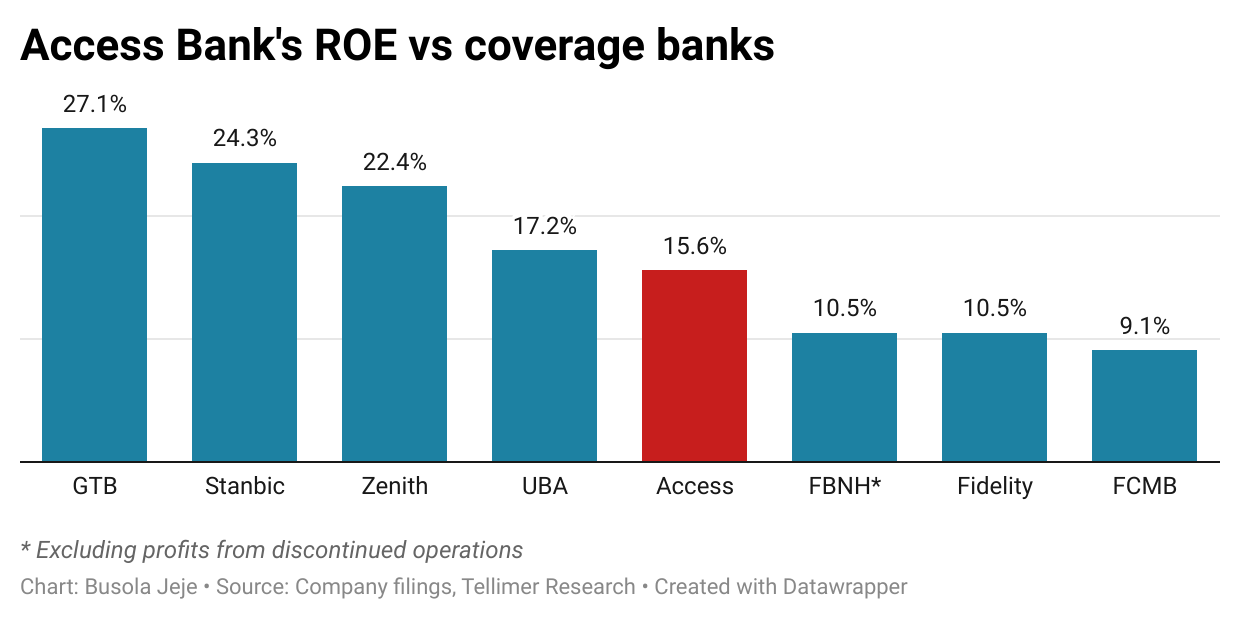 We maintain our Buy rating on Access Bank, with an unchanged 12-month target price of NGN12, suggesting an expected total return of 55%. The group’s retail banking drive and growing agency banking network is positive for fee income and low funding costs. Also, its Nigeria expansion strategy beyond Nigeria, as well as its holdco plans, create more avenues for earnings diversification, deconcentration of operating risk and cross-selling opportunities. This has begun to materialise, albeit marginally, as its ‘rest of Africa’ operations contributed 23% to FY 20 profit before tax, compared to 11% in FY 19. Although, Access Bank Ghana remained the top contributor, accounting for 82% of rest of Africa’s PBT.

We still expect the company to face headwinds arising from its expansion, particularly as it tries to maintain adequate capital buffers, optimise costs and limit inefficiencies, battle competitive forces from these new African markets and improve profit contribution from subsidiaries. Nonetheless, should the group's Pan-African vision be achieved, we think Access Bank could be viewed as an alternative to ETI and UBA, for investors looking for regional exposure. Access Bank trades at a 2.8x FY 20f PE and 0.4x tangible PB, a discount to its Nigerians peers at 3.6 FY 20 PE and 0.6 tangible PB. 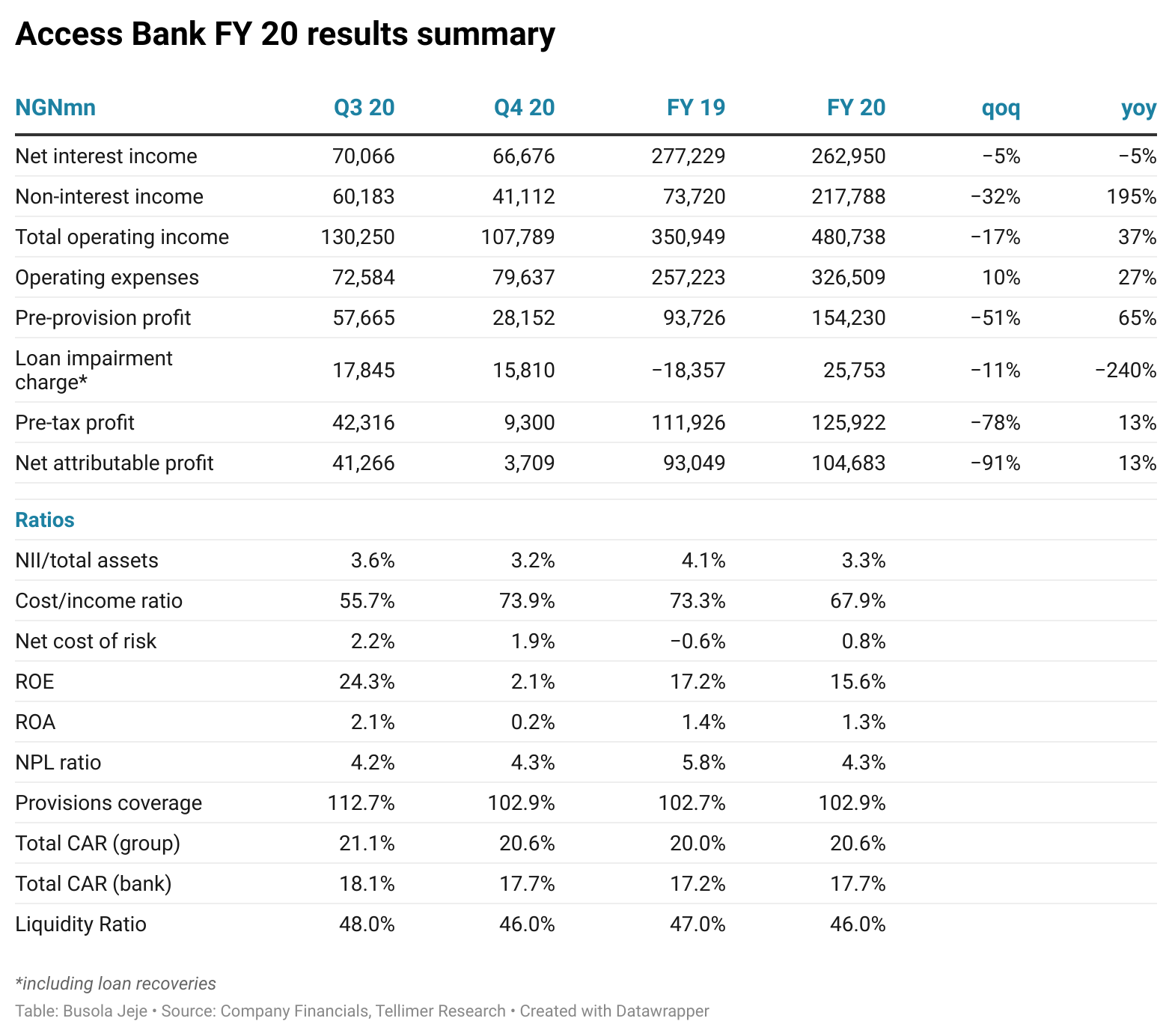 Other key takeaways from management’s call

Revenue from digital channels also grew 53% yoy, as the increased transactions on USSD, POS, mobile and internet banking outweighed the effect of reduced fee charges by the CBN. In terms of digital lending, the group generated NGN5bn in revenue from digital loans, as it disbursed NGN105bn (up 48% yoy) in the form of payday loans, device financing, salary advance and small ticket personal loans. 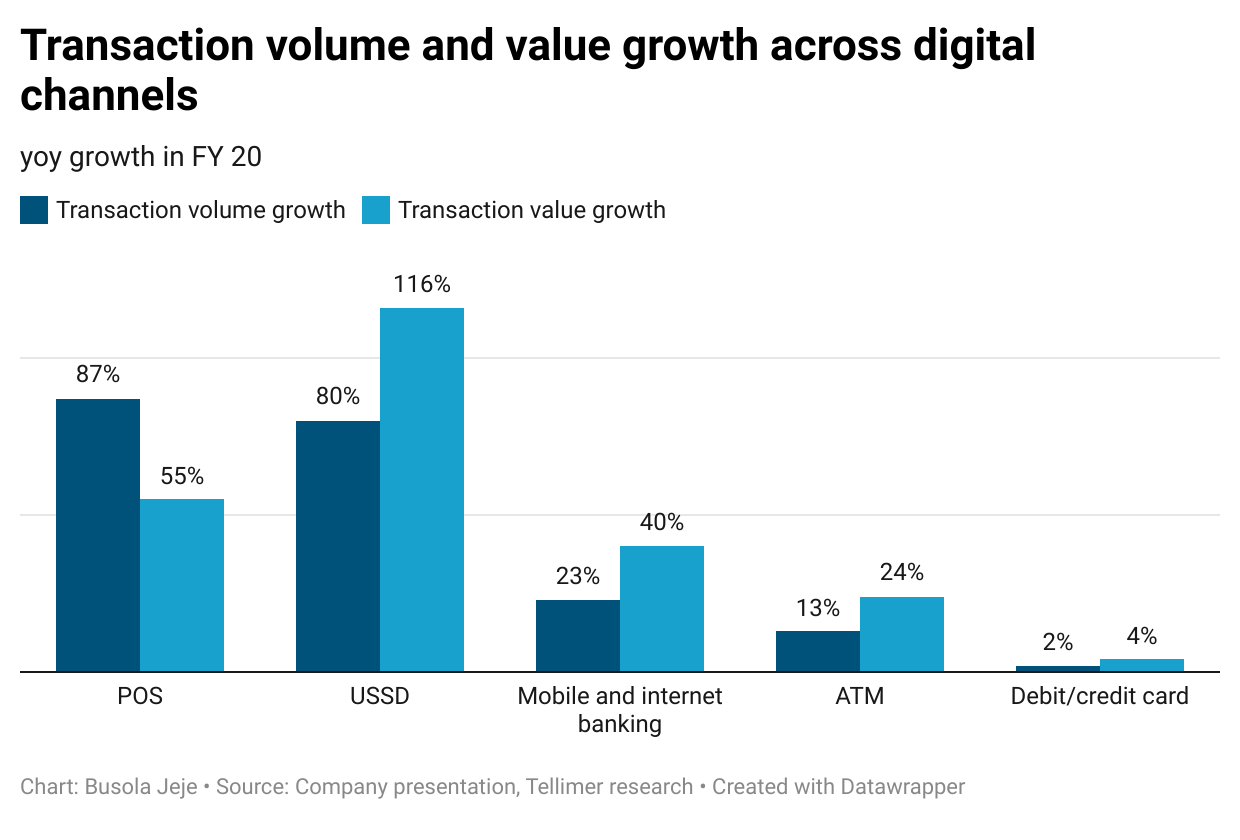 While we note that the efforts made to improve the group's digital metrics are encouraging, it is largely due to the positives reaped from the acquisition of Diamond Bank and its attractive retail banking network. This raises the question of whether we will continue to see such strong growth going forward, as the effects of the merger wane and there is further integration of the two entities.

In terms of loan mix by sector, real estate and construction, as well as oil and gas recorded the most significant increases in absolute terms, while steel rolling mills and general commerce declined. In terms of asset quality, the sectors with the largest increase in NPL ratio were manufacturing (up 13.6ppts) and general commerce (up 2.3ppts), while steel mills (down 10.9ppts) and oil and gas services (up 7.1%) improved on the back of significant write-offs. The group’s proportion of FCY loans also dropped to 26% from 40% in FY 19, as a result of conversion to naira-denominated loans for customers exposed to currency risk. 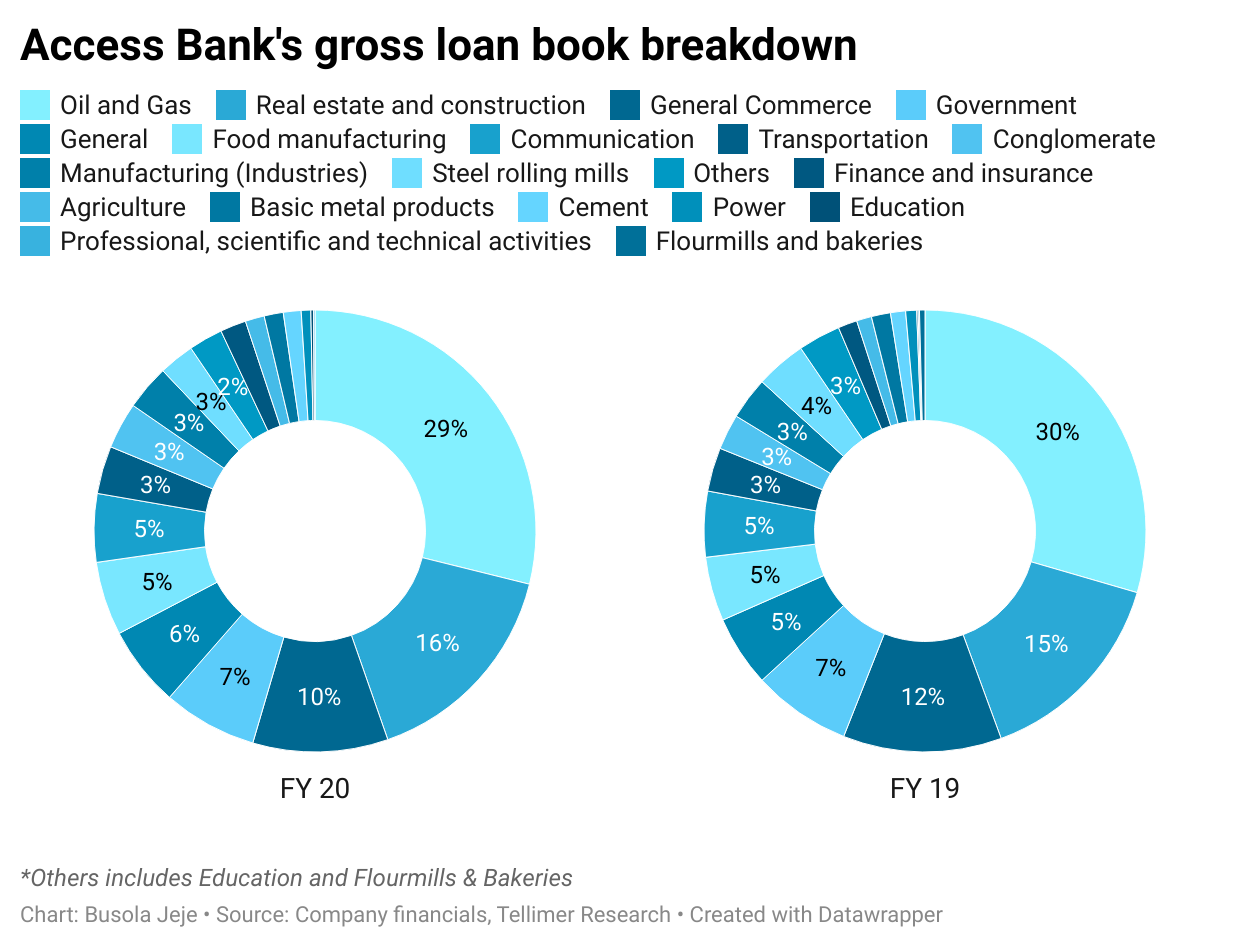 For FY 21, management expects to keep its NPL ratio below the prudential guideline of 5% (FY 20: 4.3%). Also, they are expecting a cost of risk figure of less than 1.5%, compared to 1.8% recorded in 2020 (the company’s figure ignores bad debt recovery). This is due to the better macroeconomic conditions relative to 2020. Management also noted that regulatory forbearance was only provided to performing loans, and the end of the forbearance period is not expected to bring a significant deterioration in asset quality. 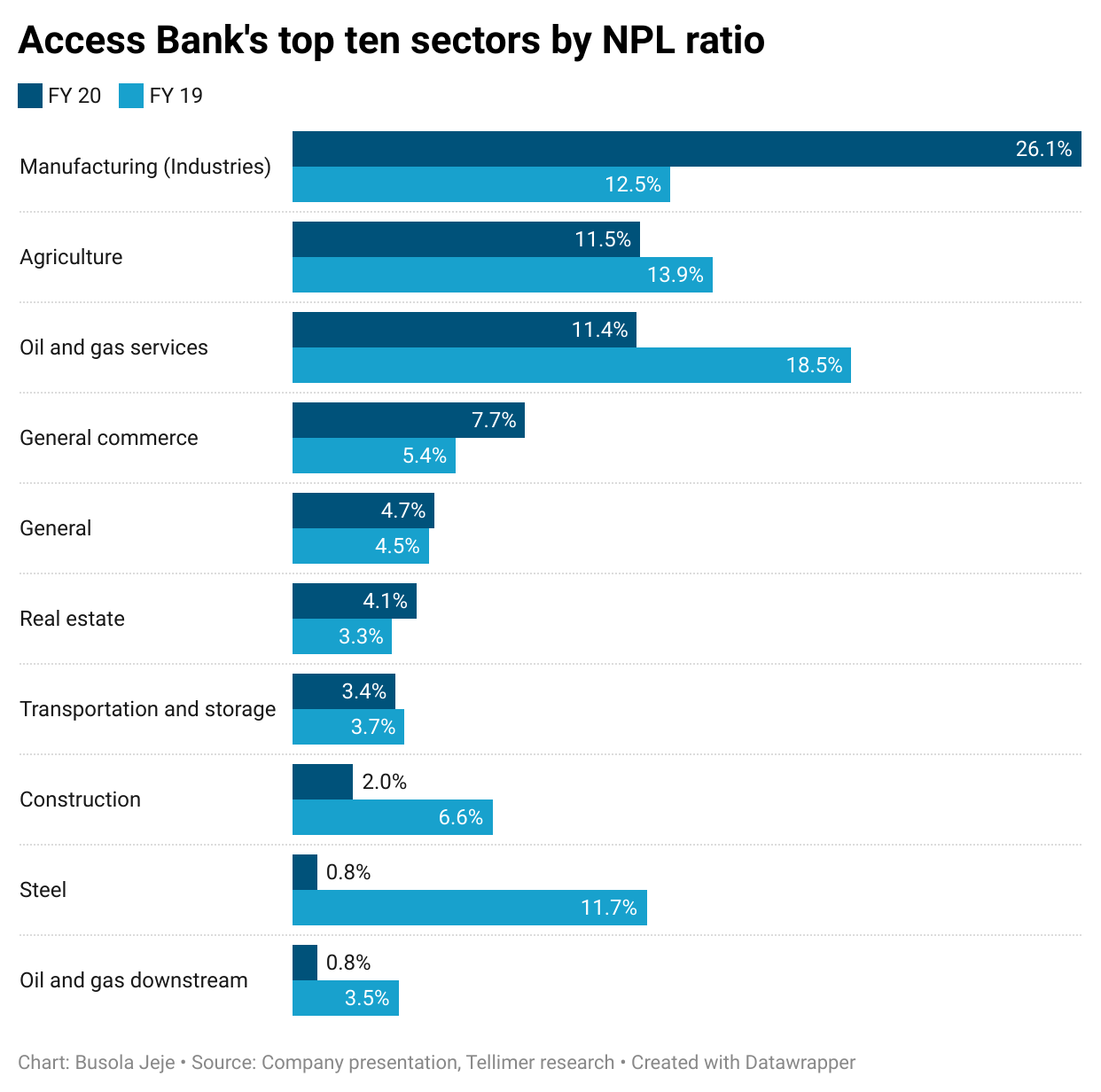 Update on synergy with Diamond Bank

As at FY-end, management noted that they achieved NGN133bn in synergy value from the merger with Diamond Bank, largely due to one-off synergies such as loan recoveries and sale of assets, and ongoing synergies from reducing cost of funds. This represents c87% of the total merger synergy value earmarked for achievement between 2019 to 2021.

Across its geographical segments, its ‘rest of Africa’ and Europe operations recorded the highest growth in total revenues at 44% and 17%, while its Nigeria operations recorded 11%. However, the group’s profits were supported by Nigeria (14% yoy) and rest of Africa (134% yoy), while Europe’s profits dropped 65%. Among its Africa operations, Access Bank Ghana remained the top contributor at 82%, however there were increased contributions from Rwanda (PBT up 292% yoy), Congo (up 283% yoy) and Sierra Leone (up 183% yoy). The profit decline in the Europe business (Access Bank UK) was due to a 61x surge in impairment charges, arising from a structured trade finance loan to agro-processing companies based in Singapore. Management noted that there was credit insurance taken on these facilities and expect to recover c75% of the amount charged as impairments over the next 12 to 18 months. 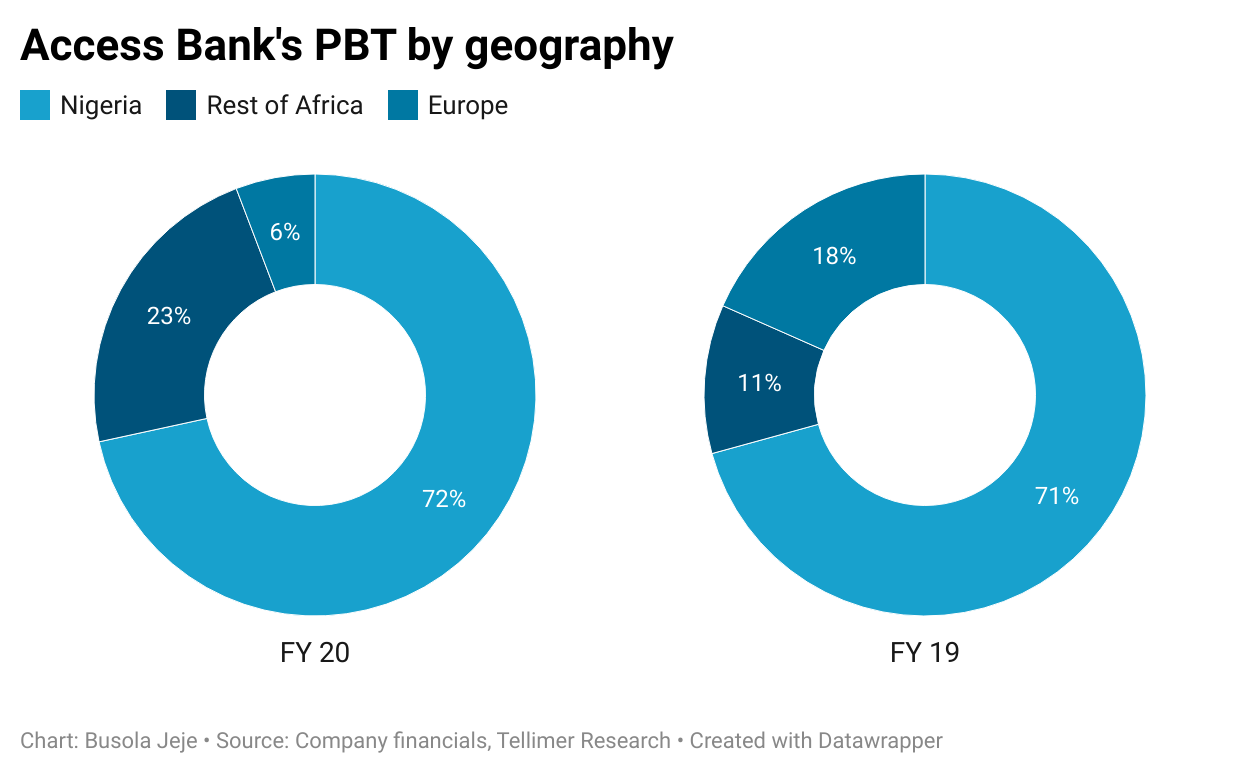 For investors, a key future event to look out for is the group’s transition into a holding company (holdco) and the development of its non-banking subsidiaries. In terms of guidance, management noted that the holdco structure is expected to be fully running in Q4 21 or, at worst, Q1 22. As previously stated, Access Bank's holdco structure will consist of four subsidiaries, which include the Access Bank group, a payments business, consumer lending and agency banking, as well as insurance brokerage.

The group intends to achieve a net interest margin of above 5%, compared to 4.9% reported in FY 20. With the gradual upturn in interest rates (particularly on fixed income securities), the management noted that they have observed an increased demand for higher deposit rates and are repricing their loans accordingly. Although the bank’s intervention fund loans are likely to continue to attract an average net interest margin of 4% from 7% previously, following the extension of the reduced interest rates on intervention funds by the CBN to 28 February 2022.

Management is targeting a ratio below 60% in FY 21, from 68% recorded in FY 20. We think this is rather optimistic, given the costs accruing to operating a larger entity and suspension of banking staff layoffs by the CBN, increased inflationary pressures, currency volatility on FCY-based costs and gradual waning of the cost benefits reaped during the pandemic in FY 20.