4 May 2021
Published by ETM Analytics

BASELINE VIEW: ZAR appreciation and resilience has been impressive and can extend a little further. However, over the longer term, this move will not be sustained once the trade surpluses moderate, global financial markets become fully priced and focus turns back to SA's fiscal position later this year and the start of next. 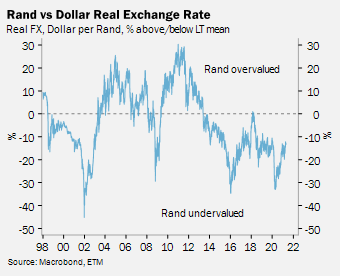 Since the last valuation report six weeks ago, there has been a substantial appreciation in the ZAR across the board. Without exception, the ZAR has made background against its major trading partners, rendering this a clear example of ZAR strength more than weakness in any of the majors.

Most developed economies do appear to have lost ground on a trade-weighted basis, but even that only explains only part of the move. QE efforts, substantial monetary and fiscal stimulation combined with improved levels of risk appetite have shifted investors away from safe-haven currencies towards emerging markets and other higher-yielding destinations.

The ZAR has been one beneficiary of this trend. Still, it is also important to note that the ZAR has gained ground because its internal fundamentals have generated a ZAR supportive environment. At a real economy level, a reduction in consumption and investment has cratered importer demand. On the flip side, some of the strongest terms of trade in a decade have bolstered exports. 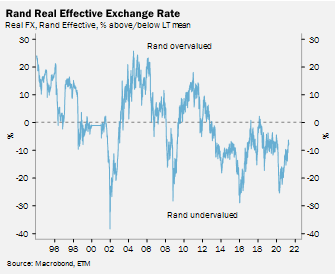 Reasons to remain bearish on the USD are well entrenched. Despite calls that the magnitudes of the twin deficits are known and should be priced in, the bias in the market, driven by real money flows, remains bearish, and speculators are choosing to ride the wave rather than fight it.

Furthermore, with the tide of monetary stimulation expected to extend as the Fed recommits to its QE programme and governments around the world double down on their stimulus efforts, it makes sense that their underlying currencies will be undermined and debased. 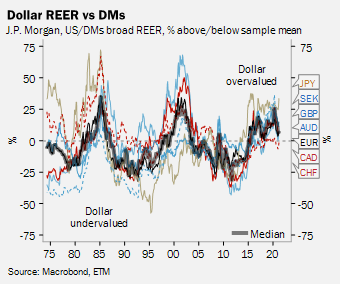 Dissecting the drivers of the ZAR's strength

Domestic consumption and investment are weak, and there is a correlation between the demand they exert on the imported component of the trade account and the trade balance. The chart of household consumption expenditure clearly shows the trade balance's behavior that shifted sharply into surplus just when consumption cratered. Before that SA ran an almost permanent trade deficit.

Gross Fixed Capital Formation, otherwise known as fixed investment, also dropped off sharply, as reflected in the right-hand chart to again highlight the dearth of demand for imports. That this happened at the same time when SA recorded the strongest terms of trade in a decade helps explain how real money flows turned sharply positive for the ZAR. 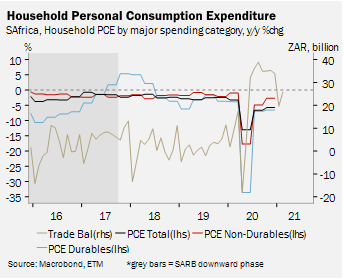 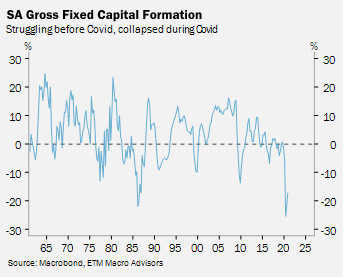 While the charts above reflect the drivers of SA's weaker importer demand, the chart below and to the right shows why SA's exports have held up. SA's terms of trade, the rise in the oil price notwithstanding, have risen to the strongest levels seen in a decade. The crosshairs show when last the terms of trade were at these highs and how it also coincides with a ZAR trading at much stronger levels. With the global business cycle heating up and likely to accelerate through H2 2021, it is quite possible that the terms of trade that have helped the ZAR recover and remain resilient will remain strong.

Based on the charts above and the rise in SA's terms of trade, it becomes understandable that the trade account as a % of GDP has risen to near-record levels. Dissecting the current account shows that the trade surplus in goods and services has singlehandedly driven the current account to the strongest surplus in almost two decades and why the reduced portfolio flows into SA have not translated into ZAR weakness many expected.

The ZAR's resilience at a real economy level is therefore very much a function of the weakness of the domestic economy, as well as the recovery in global growth and commodity prices. Nevertheless, there is substance to the ZAR's resilience and an argument for the ZAR to appreciate further and remain resilient through the remainder of the year. 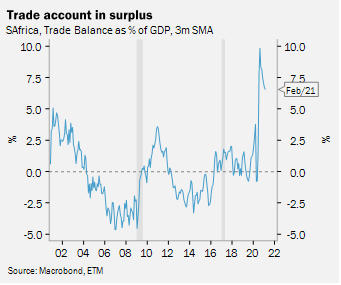 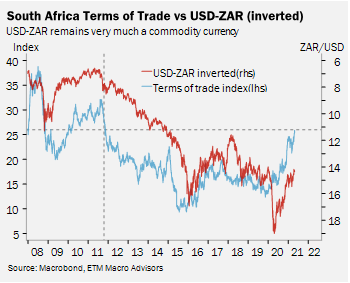 It is only when one starts to unpack the structural and fiscal risks that a very different picture for SA emerges.  The country's fiscal position has steadily deteriorated through the past decade and has left the economy vulnerable to shocks.

SA's fiscal trajectory is unsustainable and a default episode of sorts may well follow. As it stands, the credit rating agencies are downgrading SA and the tradeable market most likely to reflect the deterioration in fiscal rectitude will be the ZAR.

When adjusting for SA's troubled fiscal position, the valuation picture changes dramatically from one where the ZAR is undervalued to one where it is overvalued by as much as 20%.

It implies that there may be a discount of around 20% that is needed to attract foreign inflows to keep the trade and current accounts well-funded. The important point to note, however, is the timeframe.  This fiscally adjusted valuation offers perspective over the next 2-3 years, and is not meant to offer perspective on the current trading valuation.