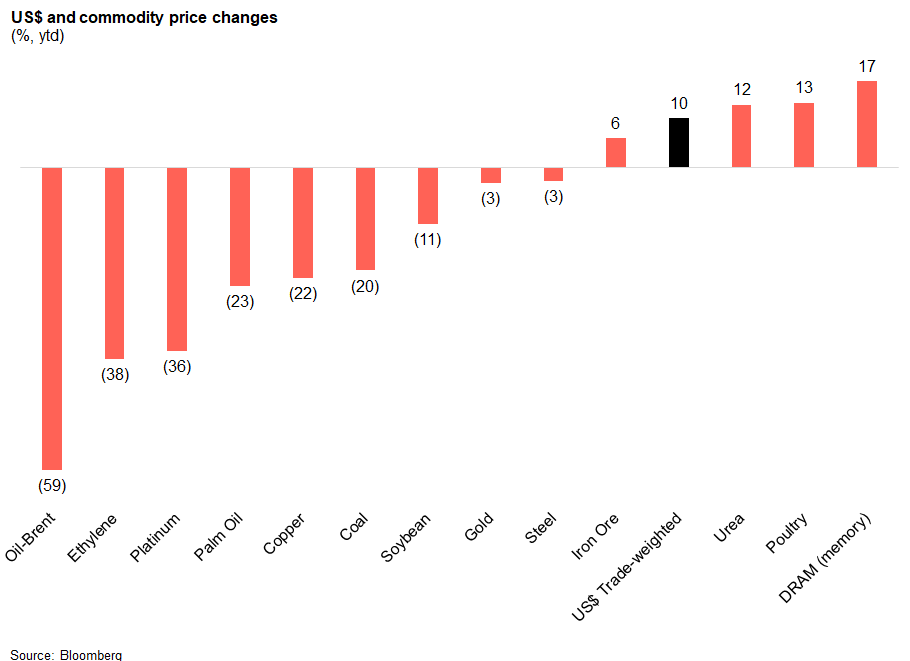 Net commodity export or import exposure appears to be a differentiating factor for FX performance year to date in the large emerging markets, much more so than in small EM

US$ strength (the trade-weighted index is up almost 10 percentage points ytd) is obviously a material headwind for local currency assets, e.g. public equities, in all emerging markets. However, in the large emerging markets (i.e. China, Taiwan, Korea, India, Brazil, South Africa, and Russia, which, in aggregate, make up over 83% of the MSCI EM index), there appears to be much more differentiation in the FX rate moves year to date according to the net commodity export exposure, compared to in the small emerging markets.

Of course, other factors may be at play (sovereign use of FX reserves to support FX rates, flight by foreign EM investors into currencies perceived as higher quality or higher liquidity, or more effective healthcare response to coronavirus).

Net commodity export or import exposure appears less of a differentiating factor in small emerging markets where FX depreciation has been driven as much by vulnerability in external accounts (which pre-dates coronavirus and oil price disruption), Euro-linked currencies and externally-driven (trade, tourism) economies.

In other words, there appears almost no hiding place for FX risk in small EM. Even in countries with deep sovereign wealth pockets, such as the rich GCC with US$-pegs, there may be low risk to FX rates but high risk to growth (fiscal spend).

FX devaluation ytd has been similar, for example, in Nigeria and Kenya, Kazakhstan and Ukraine, Indonesia and Thailand; each pair is an example in the same region of two countries on the opposite side of the oil and commodity trade.

In the small emerging markets, FX pressure is coming from different sources of concern, all of which appear to trump which side of the oil or commodity trade a particular country finds itself:

(1) Vulnerability of external accounts (servicing US$ debt or funding the current account in light of a slowdown in manufacturing export volumes, remittances from the diaspora, capital inflow from rich EM sovereigns like China or the GCC or expansionist multinational corporates);

(2) Maintain credibility on prudent fiscal and monetary policy (in light of the disruption from coronavirus and also at a time when policy markers in developed markets are adopting the stance of "whatever it takes"), particularly for countries in, or having just completed, IMF adjustment programs.

This is consistent with the view we recently published, Oil: Not a simple importer (benefit), exporter (cost) dichotomy, 9 March 2020. Here we argued that for countries like Kenya and Pakistan (where there was already some concern about FX rate risk), or, like Bangladesh and Vietnam (where there was previously little concern on FX rate risk), their net oil import exposure benefit (after an oil price collapse of c60%) could be offset by the pressure on capital inflows (as a result of lower global risk appetite and lower global growth amid the coronavirus disruption). Anticipation of pressure on capital inflow can also cause reluctance of policy makers to use monetary policy (interest rate cuts) as aggressively as they might otherwise (the mere 75bp cut recently in Pakistan was an example of this). 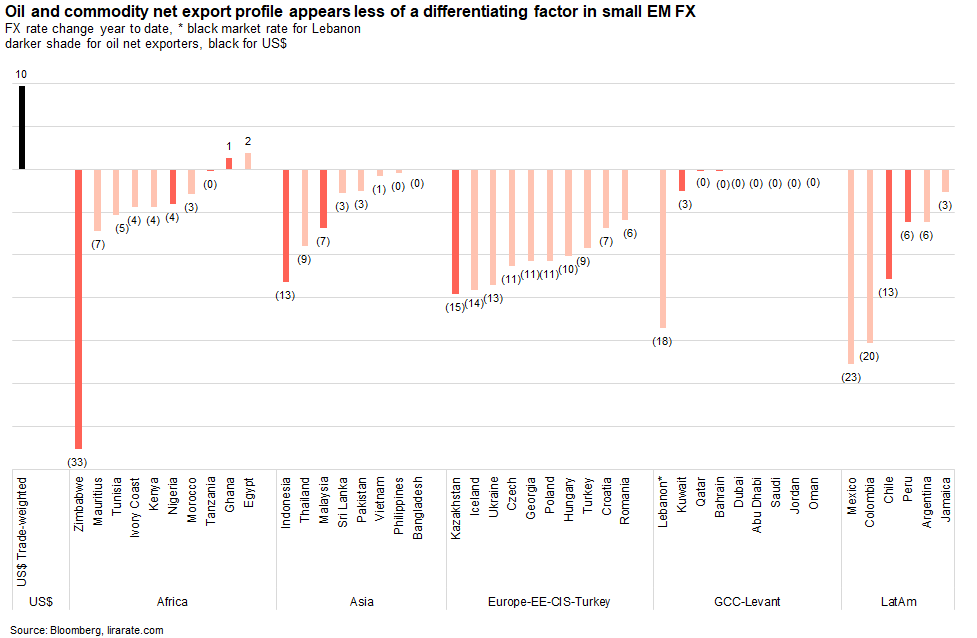