Our top picks overperformed since our previous recommendation. In Argentina Fixed Income Strategy: FX outlook splits the waters of Provincial credits, 16 May, we argued that those provinces which relied on a considerable FX hedge [1] were better equipped to weather a distress scenario given mounting difficulties to access the local FX market. In terms of specific names, we had favoured BA City, Mendoza, Salta and Tierra del Fuego. Nearly five months later, we find that this subset of provinces overperformed both the average of provincial bond returns and the USD EM Sovereign bonds benchmark [2]. A weighted average of our top picks returned -2.2% since our last recommendation until 3 October compared to -9.3% for the weighted average of the full provincial sample and -6.3% of the EM USD Sovereign benchmark (Table 1).

Table 1. Total return of Provincial credits and benchmarks since 13 May 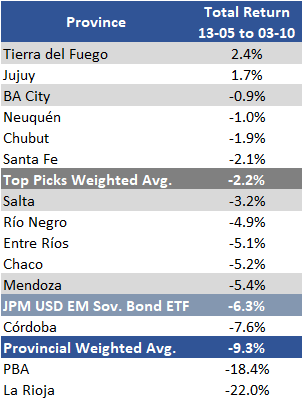 Source: BancTrust & Co. based on Bloomberg and own calculations

Even though provincial returns were negative and average provincial spreads widened relative to the EMBIG, the relative spread (vs the EMBIG) of the FX Hedged started to narrow in August and is currently trading close to its trough since the debt restructurings. Conversely, even when the relative spread of the Non-FX Hedged group took a moderate dive in August, it remains at a short distance from its peak. As a result, the spread difference between the FX and Non-FX Hedged grew to a 12-month high (Chart 1). 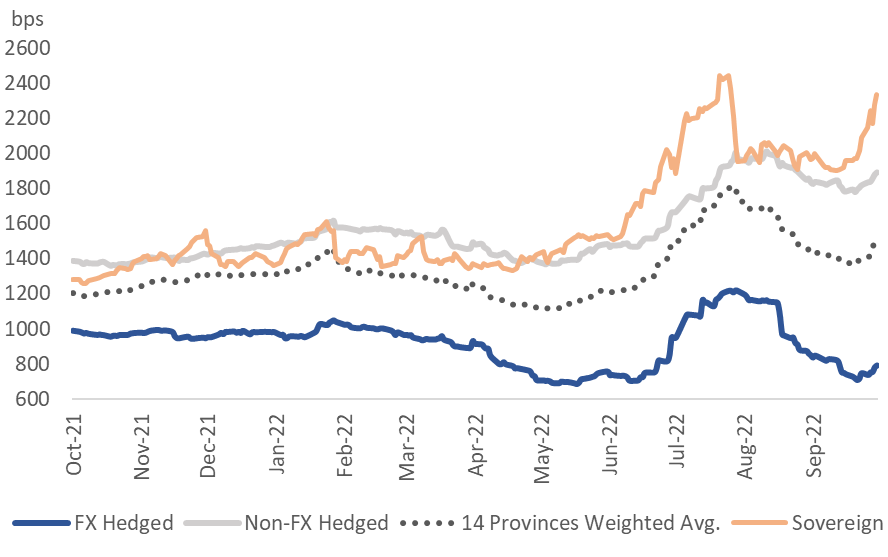 Source: BancTrust & Co. based on Bloomberg

We still favour the FX Hedged due to their resilience to idiosyncratic and systematic headwinds. On the domestic front, the international reserves accumulation scenario seems challenging while we look to a discrete ARS devaluation in early 2023 (see Macro and Strategy Update: To the tune of global factors, 05 September). Failure to rebuild reserves may cast doubts on the ability of provinces to purchase dollars in the official FX market to meet debt payments. If dollar dearth eventually triggers devaluation, the weaker USD-ARS will imply higher costs in the case of FX-denominated debt. In tandem with unsupportive local factors, the ongoing repricing of global risk is denting high-beta valuations. These dynamics could be particularly detrimental to the Non-FX Hedged category that has shown a stronger correlation with the Sovereign.

Among the FX Hedged group, we still prefer BA City and Tierra del Fuego, on the back of their debt service coverage with Eurodollar deposits and their non-default track record. Moreover, Tierra del Fuego’s bonds are backed by a royalty guarantee. On the other hand, Mendoza’s Eurodollar deposits are still on the rise. These funds originally stemmed from the payment of a federal government debt to the province and were earmarked to a hydroelectric project. However, the project has been aborted so Mendoza may have gained discretion to allocate those savings. We stick to our recommendation of Mendoza based on the latter and on this name’s strong fiscal position.

Nevertheless, some opportunities may emerge from the Non-FX Hedged group of provinces. The widening of relative spreads within the Non-FX Hedged may provide opportunities for long positions. Excess returns could be driven by the potential success of the government to navigate the adverse FX scenario and by the expectation of an opposition victory in the upcoming general elections. In our view, Non-FX Hedged provinces with lower FX exposure and healthy fiscal accounts could have an attractive risk-reward balance. This is because they are better prepared to withstand the deterioration of local and external conditions, while they would provide the largest upside in a more benign scenario.

We assessed the FX exposure of each province in order to search for opportunities. To that end, we constructed a fiscal scenario for 2023 assuming a c20% real depreciation and the potential impact of the political cycle on spending, based on the recent history and the fact that provinces will also hold gubernatorial elections. For the Non-FX Hedged group, FX bonded debt services would represent 2.4% of total revenue, slightly below the average (2.7%) of the whole space (Table 2). 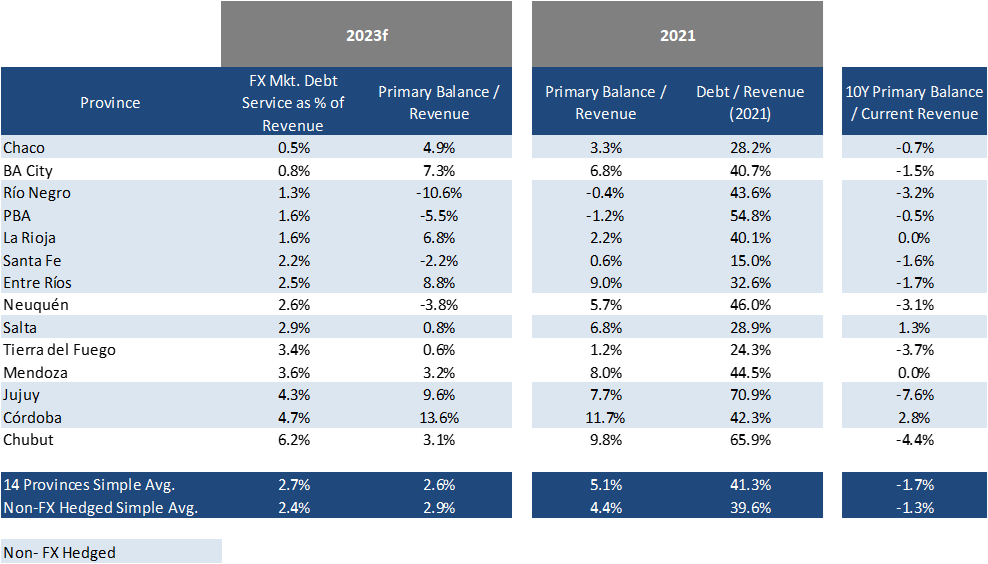 Source: BancTrust & Co. based on DNAP and own estimates

Chaco, Río Negro, Province of Buenos Aires (PBA), La Rioja and Santa Fe in the Non-FX Hedged category would face below-average FX market-debt services in 2023. This strength is offset in the case of PBA and Río Negro by their weak fiscal stance. In turn, Córdoba, Entre Ríos and Salta have a higher FX exposure, but outstanding fiscal metrics. We conducted a one-by-one assessment to cherry-pick from a shortlist that excludes PBA and Río Negro that we discuss below. 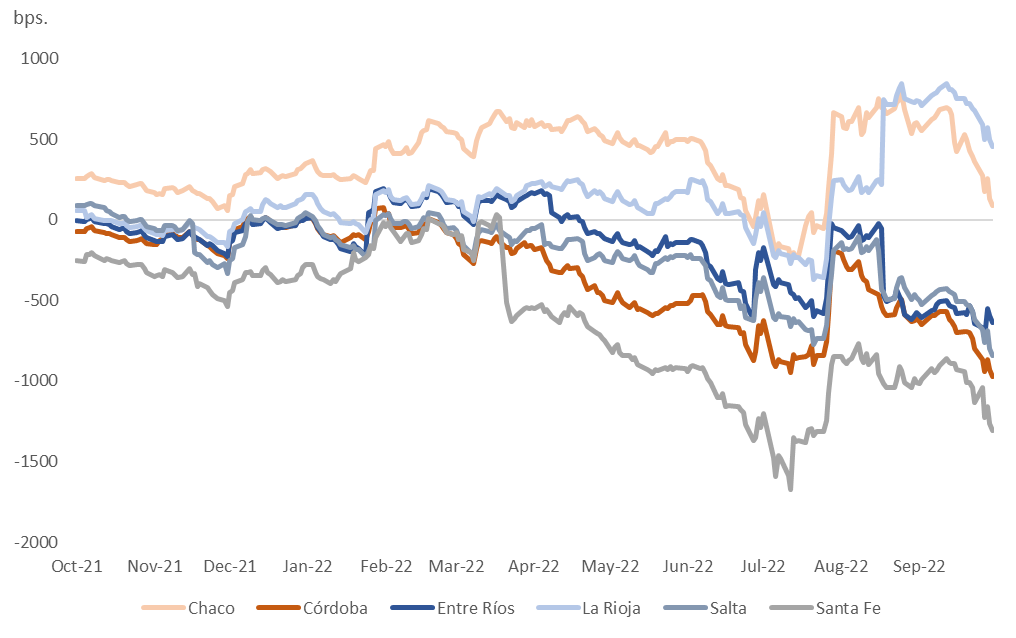 Source: BancTrust & Co. based on Bloomberg

Santa Fe will face the second capital instalment of its 2023 bond next March. Concerns that the first payment could have been missed in early 2022 due to the shallow level of international reserves motivated a spike in Santa Fe’s spreads versus the other credits in the sample. Even if this was later on reversed, the possibility of a renewed bout of uncertainty makes us wary of this name.

Córdoba, Entre Ríos and Salta have been trading at similar spreads vis à vis the Sovereign. These provinces posted very robust fiscal figures in 2021, but Córdoba and Salta portray better long-term trends. We expect Entre Ríos and Salta to have a lower FX debt servicing burden next year. However, Entre Ríos has virtually no FX savings, while Córdoba and Salta’s Eurodollars are enough to meet c30% of FX market-debt payments in 2023. As can be seen from Chart 2, the convergence of Salta’s spreads to those of Córdoba -in line with the historical data- seems to be on track. Based on this evidence, we continue to like Salta in the Non-FX Hedged group.

Finally, Chaco and La Rioja’s spreads widened sharply against the Sovereign since the appointment of Economics Minister Sergio Massa. This could be accounted for by low liquidity and the rally of Sovereign bonds driven by Massa’s credibility boost. In any case, available prices indicate that while Chaco is making a fast catch-up, La Rioja seems to be lagging. Looking back to the recent history, La Rioja used to trade with a low spread differential compared to the Sovereign, while the opposite applied to Chaco. Both credits are relatively illiquid and have similar fundamentals and FX exposure. From this point of view, La Rioja seems oversold. Instead, Chaco’s spreads have reverted to their 2021 average.

All in all, we reaffirm our preference for BA City, Mendoza, Salta and Tierra del Fuego while we incorporate La Rioja to our top picks. As previously outlined, the FX Hedged group of provinces seems the obvious choice in the current market conditions. We still find value in Salta within the Non-FX Hedged sample and now see some room for spread compression in La Rioja, although low liquidity could become a hurdle hard to overcome.