The bullish bias in the USD remains intact at the start of the new week. The Trade-weighted USD (DXY Index) has risen to a 24-year high this morning amid growing signs that Japan will continue with its loose monetary policy following the ruling conservative coalition’s strong election showing. This comes on the back of Friday’s stronger-than-expected US jobs print and bolsters expectations that the monetary policy differential between the US and other major economies will continue to widen in the months ahead. Mounting global growth fears are also supporting the safe-haven USD this morning. G10 currencies are a sea of red against the USD, with the losses being led by the JPY. Emerging market FX is also broadly negative ahead of the European open, with the ZAR leading the decline.

Global bond yields surged on Friday as the US posted strong jobs numbers to keep the market pricing in a hawkish Federal Reserve. Shorter-dated US Treasuries underperformed, with the 2yr yield rising above 3.100% and holding onto those levels in early trade today. Focus for the week will be on the CPI data, as any topside surprises there could see short-dated yields rise towards 3.25%, further inverting the yield curve as the Fed will be forced to plunge the economy into a recession.

UK and German yields also increased, with yields in the UK supported by the possibility that we could see tax cuts in the economy to bolster households and smaller companies during this time of higher inflation. German bonds, however, outperformed on Friday and may continue to do so in the coming sessions as recession risks for the EU are building. Even though inflation remains so elevated, the economic risks are driving a repricing of rate hike risk for the ECB over the longer term. This is pressuring the EUR at the moment and keeping the USD supported.

Africa: Against a backdrop of surging fuel costs that have governments scrambling over how to respond, protests have been building on the African continent. Demonstrators last week blocked a key supply route in South Africa, tying up the delivery of commodities over an increase in the regulated pump price. That followed a protest in Mozambique where bus drivers paralyzed the capital Maputo after diesel prices jumped. The effect of fuel shortages throughout the continent in the wake of the war in Ukraine is especially pronounced for populations whose transportation costs account for a disproportionately high % of monthly budgets. In Kenya and Nigeria, both heading to elections in the coming months, the governments are burdened with costly fuel subsidies as they struggle to finance widening budget deficits. As governments across the continent try to take hold of transport inflation which feeds into food inflation, we could see further pressure on limited fiscal resources.

Egypt: In a statement released by the Egyptian cabinet on Friday, Egypt is set to commence talks with the International Monetary Fund in the coming weeks to reach a staff-level deal over a new program under the Extended Fund Facility mechanism. According to the cabinet, the new pact aims to provide finance to the Egyptian state to support comprehensive national economic reform, curb the negative effects of the global economy on the country and ensure economic stability. The IMF said, in a separate statement, that it had held productive discussions during a staff visit to Egypt on economic policies and reforms to be supported by an extended fund facility.

Mozambique: Headline inflation in Mozambique accelerated further in June, coming at 10.81% y/y from 9.31% y/y in May. This was the third straight month consumer price inflation had risen and the first month of double-digit inflation since August 2017 amid a general increase in the prices of goods and services. With risks to the inflation outlook still tilted to the upside in the coming months and inflation accelerating, policymakers could consider tightening rates at the next meeting following a pause at the meeting in May.

Zambia: In the Finance Ministry's medium-term budget plan published over the weekend, the ministry forecast the budget deficit to widen by more than expected due to spending pressure in the second half of the year. The deficit is projected to widen to 9.9% of GDP in 2022 from a 6.7% targeted in the budget, partly due to expenditure increasing to ZMW183bn ($11.1bn) from a previous forecast of ZMW173bn. The ministry added that extra spending is likely to go toward combating shortages of medical supplies, pharmaceuticals, and grain, while further funding may also be needed if gasoline and food prices continue to surge due to supply shocks caused by the war in Ukraine and the kwacha weakens. The additional funding is set to come from external funding.

Zambia: Zambian lawmakers are considering a new law that sets strict limits on public borrowing and enhances transparency to avoid future debt troubles. According to the proposed legislation, lawmakers will need to approve an annual borrowing plan prepared by a new debt management office. Total outstanding government borrowing won't be allowed to exceed 65% of the previous year's GDP, and the cost of servicing external debt will be limited to 20% of the average annual recurrent revenues of the prior three years. The new law may help placate  Zambian creditors' concerns that the country won't over-extend itself again, as they consider Zambia's request to rework its debt.

Zambia: A Reuters report citing sources close to the matter suggests that Zambia's official creditors are expected to offer their financial assurances by the end of this month, paying the way for the first debt restructuring under a G20 framework. No firm date has been set for a  meeting of Zambia's creditor committee, but sources briefed on the matter said they expected Zambia to secure financial assurances by the end of the month and said private-sector creditors were cooperating. In what has been a slow process, Zambia would be the first of three countries that have requested debt relief under the Common Framework agreed by the Group of 20 major economies and the Paris Club of official creditors to move forward.

Forex: Falling net reserves are another headwind for the Egyptian pound

Foreign currency reserves play an important role in cushioning against immediate liquidity constraints and a currency’s ability to withstand shocks. Therefore, it is worth looking at the latest reserves data out of Egypt. Egypt’s net international reserves declined for the third time this year as the war on Ukraine placed additional pressure on the country’s external finances. Specifically, net reserves fell to $33.4bn in June from $35.5bn in May. 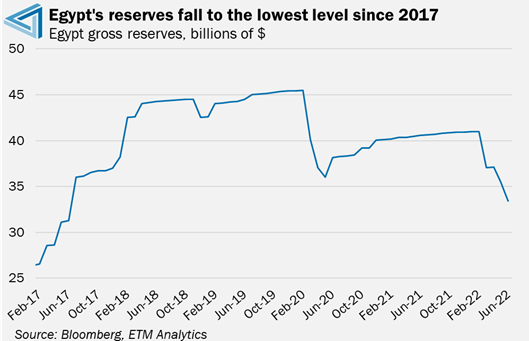 The decline in June follows a dip in March and May’s $2bn plunge and suggests there is yet to be a reprieve from the economic fall out of the war in Ukraine, which has led to a higher import bill for wheat and fuel and triggered foreign outflows to the tune of $20bn in the local debt market. Egypt has, however, secured new funds, including pledges of more than $22bn in deposits and investments from Gulf allies, and is in talks with the IMF over a program.

For now, declining reserves and foreign currency outflows are likely to place further pressure on the Egyptian pound, which remains one of the worst-performing African currencies on a year-to-date basis. The EGP has lost around 20% and is the third worst-performing among the 22 currencies tracked by Bloomberg. In May, Moody’s warned of “a significant narrowing in the foreign-exchange reserve buffer to meet upcoming external debt service payments.”

Following the stronger-than-expected US jobs data on Friday, it remains clear that headwinds facing emerging market bonds are likely to remain acute in the near term amid expectations for the Federal Reserve to remain steadfast in its policy tightening. Since the pivot in monetary policy from major central banks, emerging and frontier market bonds have come under significant pressure. The magnitude of the losses in emerging market and African bonds was highlighted last week.

Meanwhile, data released towards the end of last week showed that emerging markets are suffering their worst wave of capital outflows in seven years. According to data compiled by the Institute of International Finance, investors pulled $4.0bn from emerging market bonds and equities in June, marking the fourth straight month of losses. 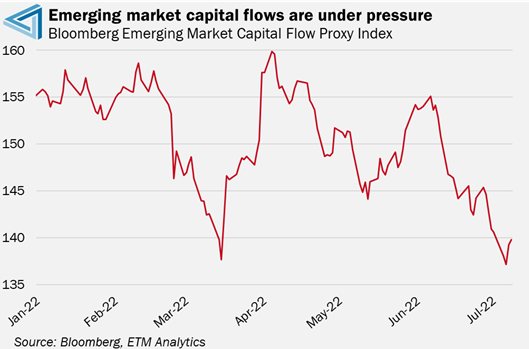 The IIF highlighted in its report released last week that the mounting risk of a global recession has weighed on capital flows into emerging markets as anxiety builds over geopolitical events, tighter monetary conditions and inflation. Many forecasters, including the World Bank, have revised their global growth forecasts lower in recent weeks as risks intensify. The World Bank now sees global growth expanding by 2.8% in 2022.

As global risk-off conditions prevail, the headwinds for emerging and frontier market bonds are expected to remain robust as investors continue to rotate into haven assets. How long the risk-off conditions remain intact will likely depend on when inflation will peak. Easing inflation against the backdrop of mounting inflation pressures should result in a less hawkish stance from major central banks and would undoubtedly provide some reprieve for emerging market bonds.

The United Nations Food and Agricultural Organization (FAO) Food Price Index declined slightly in June, the third consecutive month that the index has fallen. The FAO food price index averaged 154.2 points in June, down 2.3% from May. The largest decline in international food prices has been in vegetable oils, cereals and sugar. In contrast, dairy and meat prices increased.

Supply concerns have been easing globally, and fears about a recession have offered some relief to the record-high food prices households have been experiencing for the last few months. As growth concerns intensify and supply issues ease, food prices are likely going to continue to fall in the coming months. However, it is unlikely to be a significant enough margin to impact retail prices. 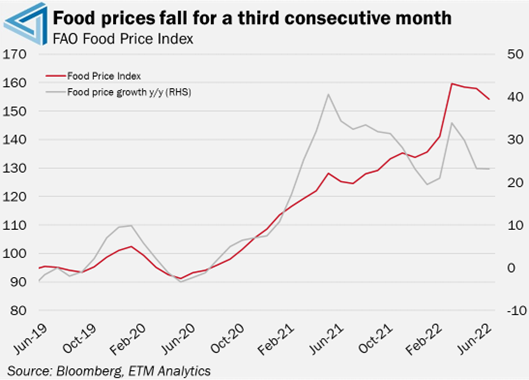 There is still a lot of uncertainty surrounding grain exports from Ukraine via sea. However, according to the FAO, Ukraine’s corn stockpiles could reach six times their pre-war level, which has raised the outlook for global grain inventories. So if Ukraine's port opens up for grain exports, this will likely result in even more relief to food prices. Meanwhile, wheat prospects have dipped slightly due to the dryness in the EU.

Lower food prices could provide some need relief for import-dependent African countries. However, risks such as high fertilizer prices and rising shipping costs could keep consumer prices elevated for the remainder of the year. Finally, the fact that the index has fallen for the third consecutive month indicates that food inflation may have peaked. This could, in turn, alleviate some pressure on central banks to slow down on monetary policy tightening.