We focus on the MENA region this month, and argue that the Aramco attack has raised insecurity risk in an unprecedented way for Saudi and the GCC and that beyond inflows related to EM index weight increases, the fundamental investment case is weak. We also consider the impact of protests on consensus favourite, Egypt, where the risk for President Sisi, at this stage, looks much more significant than that for investors. Overall, we would have expected Saudi equities to react much more negatively than those in Egypt. The opposite has been the case.

This demonstrates the schism between large EM, driven by ample liquidity and fund flows more than fundamentals, and small EM and FM, driven by more sensitivity to bad rather than good news and increasingly orphaned by foreign investors fearful of being trapped by low liquidity. Another example this month is the inexplicable out-performance of large Asia exporter equity markets (China, Korea, Taiwan) compared to smaller ones (Bangladesh, Indonesia, Malaysia, Philippines, Vietnam).

This suggests outsized returns for those international funds that can remain invested for long enough in these cheap, smaller markets: see our Beggars Banquet report from earlier this year. Ironically, this month has seen outperformance from one of those markets, Pakistan (up 8%). It is the most attractive of the three cheapest – and least trusted policy-wise – markets we cover: Argentina, Nigeria and Pakistan (the focus of our August monthly).

Attacks on Saudi Aramco and tankers in Gulf of Oman 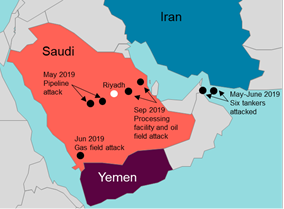 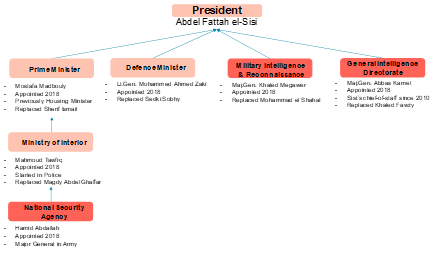 US rate cut fuelled rally in large EM and LatAm but not small EM and FM: explained only by liquidity and accessibility, not fundamentals

Another US rate cut (albeit it was expected, and the Fed’s commentary was less dovish than consensus expectations) provided a benign backdrop for EM (up 3%) and DM (up 3%). Technology, South Korea (Samsung) and Russia (oil price) led EM. Even India turned a corner after corporate tax rate cuts.

The LatAm markets appear to have rallied in the same manner as large EM; i.e. driven more by expectations of easier liquidity following the US rate cut rather than country-specifics. Argentina (up 4%) rose despite little detail on potential presidential candidate Fernandez’s debt restructuring plan.

The smaller markets in the Asia manufacturing-exporter group fared much worse than the larger markets. Bangladesh, Indonesia, Malaysia, Philippines, and Vietnam were flat to down, compared to up 4% to 9% for China, Korea and Taiwan. FM (down 2%) fared much worse, dragged down particularly by Kuwait (down 5%) and Bangladesh (down 3%).

This dispersion between large EM and LatAm and small EM and FM has, in our view, much more to do with liquidity (passive funds driven by index weights in large EM and active funds wishing to avoid trapped positions in illiquid small EM and FM) and accessibility (LatAm ADRs) of those larger markets compared to the smaller ones, rather than fundamentals.

We discuss more on MENA (Saudi outperformance versus Egypt) in the report, before our regular FM and EM data appendix (performance, liquidity and valuation charts and country market-macroeconomic-political database). 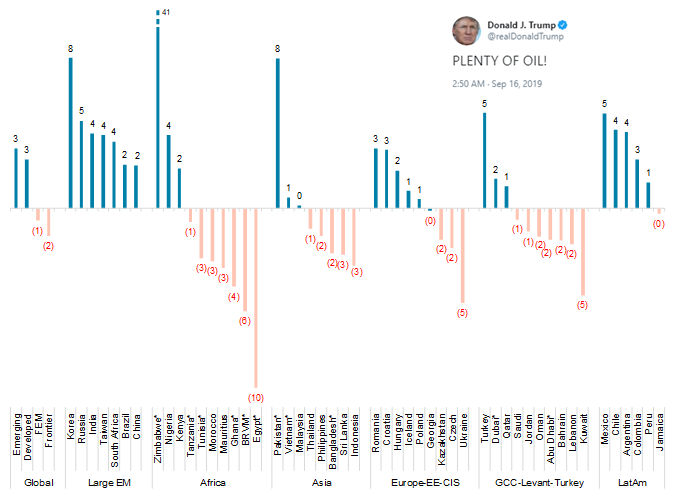