In addition to our review of the month to date in frontier and emerging markets, we focus on our two top country picks this month: Bangladesh and Vietnam. Both have generated disappointing equity market returns over the last year despite continued positive macroeconomic performance. They have not been immune to the investor apathy that has struck most of the Asian exporters in the fallout of the US-China trade war. But both are beneficiaries from diverted purchasing and relocated manufacturing.

A verbal, incomplete and fragile trade deal between the US and China, and consensus expectations of another 25bps cut by the US Fed (next meeting on 29-30 October) are the main drivers behind the rise in the MSCI EM index, which is up 2.7% month-to-date. So far EM equities are generally oblivious to the formal impeachment inquiry into US President Trump.

Taiwan (up 4.2%) was a clear beneficiary of better sentiment on US-China trade and better-than-expected Q3 revenues from bellwether TSMC.

South Africa (up 6.8%) enjoyed the afterglow of its 2.7x over-subscribed US$5bn Eurobond issue at the end of September, a pick up in the SACCI measure of business confidence from its record-low in August, and in anticipation of the mid-term budget on 30 October; all of this despite ongoing power outages and financial uncertainty from Eskom.

Brazil (up 1.8%) underperformed on concerns over whether President Bolsanaro’s increasingly fractious relations with his own party (PSL) in Congress (partly over his son’s role in the party) will impede structural reform; the final Senate vote on pension reform is due by 22 October.

Korea (up 1.7%) also underperformed amid concerns over low growth, uncertainty over further policy rate cuts, poor relations with Japan (forced labour reparations, trade restrictions) and low approval ratings for President Moon (down to 39% from 80% in 2017, according to Gallup).

Chile (up 6.5%) was driven by better US-China sentiment; with copper price up 2% month to date (up 6% after Phase 1 was announced) – copper accounts for c50% of exports and 10-15% of GDP. Expectations of further policy rate cuts also helped. However, this equity index performance predates the 18 October riots in Santiago against public transport fare hikes and the subsequent declaration of a state of emergency.

Turkey (down 6.7%) was hit by the fears of a sustained deterioration in US relations following the invasion of northeast Syria, the imposition of sanctions (albeit relatively minor compared to the stated desires of some in the US Congress) and the start of criminal proceedings against Halkbank for violations of Iran sanctions (among other charges). The mitigating argument is that Turkey remains too strategically important for the US.

Saudi (down 5.3%) was much weaker than GCC peers due to a delayed reaction to the strike against core oil producing assets, the fade of EM index related inflows (merely the fifth, and last, tranche in March 2020 of 25% of Saudi’s full weight in FTSE Secondary EM remains) and in part due to mobilisation of local funds (by selling existing equity positions) in anticipation of the Aramco IPO. This equity index performance predates the delay of the IPO, reported on 18 October. We continue to prefer Saudi to GCC peers, but are relatively unenthusiastic relative to the wider EM and FM universe.

Pakistan (up 5.6%) was helped by signs that the wheels are finally in motion for issuing sovereign Eurobond (FX reserves import cover remains near 3 months, with merely half of these reserves sitting with the central bank), a 64% yoy fall in the current account deficit in the Jul-Sep quarter (albeit led by import contraction rather than export growth), relief that there was no downgrade of Pakistan to the FATF black list, the return of high net worth local investors to the market (perhaps prompted by the meeting between business leaders and the Army chief, but more likely because local currency government bond yields have started falling as inflation peaks). We remain positive on Pakistan.

Kenya (up 2.1%) bounced after President Kenyatta rejected the loan rate cap part of the Finance Bill (on 17 October). This rate cap has constrained growth in Kenya’s credit-dependent economy. Even though Kenyatta’s Jubilee coalition is divided, his influence on MPs constrained (he reaches his term limit in 2022) and there has been little support for a repeal among MPs, a 2/3 majority of at least 50 MPs (the quorum for the 349-member National Assembly) would have to dissent from his view to preserve the loan rate cap (even in a diluted form). Kenya has de-rated in the last 12 months, but we see less compelling risk-reward than in Egypt in a pan-Africa context, and in Bangladesh or Vietnam in the global FM group.

Nigeria (down 7.4%) was hit by renewed concern on FX rate risk: this follows restrictions on the use of FX for milk imports, the signal from President Buhari that this restriction may be applied to a wider set of consumer food items, the pick-up in inflation in part caused by the closure of land borders, and the failure to build gross FX reserves even higher (currently cUS$44bn compared to a peak of cUS$47bn in April 2018), despite steady oil revenues and portfolio inflows into local currency debt. Nigeria remains our least preferred of the markets that are very cheap but consensually viewed as having low policy credibility (we prefer Pakistan and then Argentina).

Argentina (up 0.3%) underperformed LatAm peers as inflation accelerated faster than expected to 53.5% yoy and the favourite for the 27 October Presidential election, Alberto Fernandez, indicated he will pursue a Uruguay-style debt restructuring. While there is perhaps too much uncertainty ahead for an absolute-return equity investor, for index-benchmarked investors, Argentina is too big and easily accessible (via its ADRs) to ignore and its defensive, non-Argentina stocks (MELI, GLOB) may have outperformed sufficiently to prompt a revisit of the banks.

Iceland (down 3.6%) was weak because of a profit warning from Arion Bank. This was caused by further deterioration in the quality of assets it had taken over following historic customer defaults, although the bank stuck to its medium-term financial targets. Separately, Iceland was added to the FATF grey list (on 18 October).

Jamaica (down 4.3%) fell due to the announcement of a sustained (up to two years) outage of alumina capacity. Alumina exports equate to about 15% of GDP. The Alpart refinery accounts for over 50% of Jamaica’s alumina capacity. It is owned by China’s JISCO and is undergoing a 20% capacity expansion and technology upgrade. Jamaica is also near the end of a highly successful IMF programme (ends in November 2019), which has seen fiscal balance improve from a 6.4% deficit in 2011 to a 0.2% surplus in 2018. In the last 12 months, Jamaica equities are up c60%.

We discuss more on Bangladesh and Vietnam below before our regular FM and EM data appendix (performance, liquidity and valuation charts and country-market-macroeconomic-political database, which incorporates the October 2019 update to the IMF’s global economic forecasts). 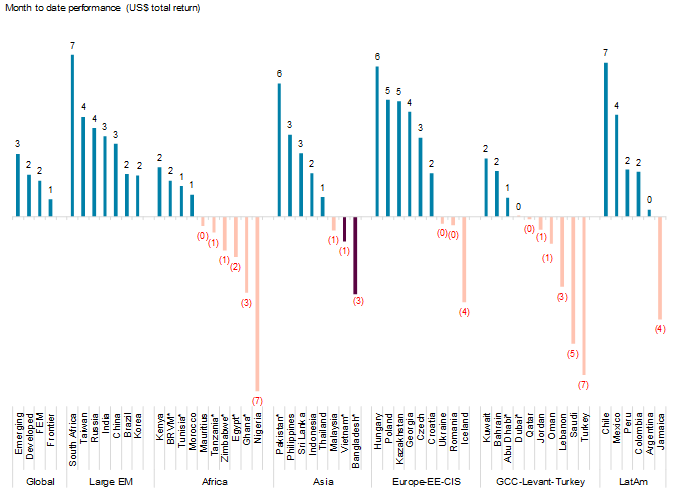