In this report, we pick out this month’s FM and EM equity market highlights with links to published research and updated country data snapshots. Our most recent country ranking of the 33 markets in our coverage, based on valuation, FX rate risk, growth prospects and political risk, is accessible via this link – Beggars Banquet. Also, our ranking of financials in our coverage is accessible via this link – Banks: Our favourites.

A revisit of some of FM and EM's cheaper markets begins

The broad ‘risk-on’ rally of June did not continue in July, with global equity markets broadly flat, but there are signs in the rallies in Dubai, Sri Lanka and Turkey that investors are revisiting some of the cheaper markets (measured on price/book versus history) in FM and EM. This is by no means universal, with other cheap markets – eg Bangladesh, Egypt, Mexico, Nigeria and Pakistan – continuing to underperform.

On the basis of a pivot to more positive top-down fundamentals and our sense from interaction with investors that attention is being drawn, we think Pakistan should be next in line for this type of revisit.

Overall, equity market performance has been muted in July to date. FM has modestly outperformed (having lagged due to low liquidity in June), up 2.2% versus DM up 1.8%. EM has underperformed, down 0.1%.

The global backdrop was characterised by a stable US$ (trade-weighted up 20bps) and US yields (10-year up 7bps), consensus expectations of a 25bps rate cut in the US on 31 July, low expectations from the resumption of US-China trade talks on 30 July (post the G20 summit), and a 5% drop in oil price (as declining US inventories and continuing OPEC+ output restraint offset US-Iran rhetoric on tanker attacks and sanctions and sluggish global growth).

Large cap EM tech stocks (Tencent-Naspers, Alibaba, Samsung and TSMC, which collectively account for 18% of MSCI EM) were up 5% (weighted by market cap) and outperformed.

Brazil (up 3%) also outperformed, after the lower house of Congress approved President Bolsanaro’s pension reform by a wider margin than expected (73% in favour versus the 60% needed).

India (down 4%) underperformed amid further signs of economic slowdown (the IMF cut its GDP growth forecasts, due to weaker domestic demand, by 30bps to 7.0% and 7.2% in 2019 and 2020, respectively), a fiscal budget with no significant stimulus, uncertainty over foreign currency bond sales, ongoing tensions on US trade and foreign investor outflows. According to Reuters, consensus expectations are for a 25bps rate cut to 5.5% on 7 August.

Turkey was up 10%, after a remarkably benign FX rate reaction to the 4.25ppts cut to interest rates (which followed President Erdogan’s change to a more compliant central bank governor), relief over the muted sanctions response from the US over arms purchases from Russia and from the EU over drilling for gas near Cyprus, and better-than-expected results from banking bellwether Akbank.

Kuwait was up 5.5% on continued MSCI EM index inclusion-related inflows (0.5% of the index in May 2020) and 5% better-than-expected Q2 earnings from KFH in Banks.

Abu Dhabi was up 8% and Dubai was up 7%, with stocks geared to the expansion of both emirates (eg real estate, DFM) particularly strong, as visa reform and potentially higher foreign ownership limits offset real estate price declines. According to JLL, in Q2, Abu Dhabi residential apartment and villa prices fell 15% and 6%, respectively, and both categories fell 9% in Dubai. Average daily Hotel rates in both cities fell 12% yoy.

Mexico and Chile were down 5% and 4%, respectively, driven by GDP growth forecast cuts and, in the case of Mexico, exacerbated by fresh policy-credibility concerns following the resignation of Finance Minister Carlos Urzúa.

Egypt was down 4% as industrial activity (PMI index) declined, some commercial airlines suspended flights to Cairo and interest rates were left unchanged. The successful passage of amendments to the Investment Law in July (mainly to do with improving incentives for FDI by expanding the coverage of tax exemptions to capacity expansions of existing facilities, treatment of strategic stakes of less than 10% as FDI) appeared to remind investors of the decline in FDI since 2016 (down 8% in both 2017 and 2018) and the persistent dominance of military-related enterprises, as opposed to reinforcing confidence in the structural reform thesis.

Pakistan was down 4% as poor earnings reports and estimate cuts (resulting from higher finance, fuel and imported input costs and weaker demand) offset IMF loan approval, the broadly stable FX rate and a positive US visit by Prime Minister Imran Khan. Notably, the largest and most liquid stocks, HBL in banks and Lucky in cement, which are those most likely to considered by foreign investors, significantly outperformed local peers (despite weak results in both cases).

Chart: Performance in US$ total return terms, month to date 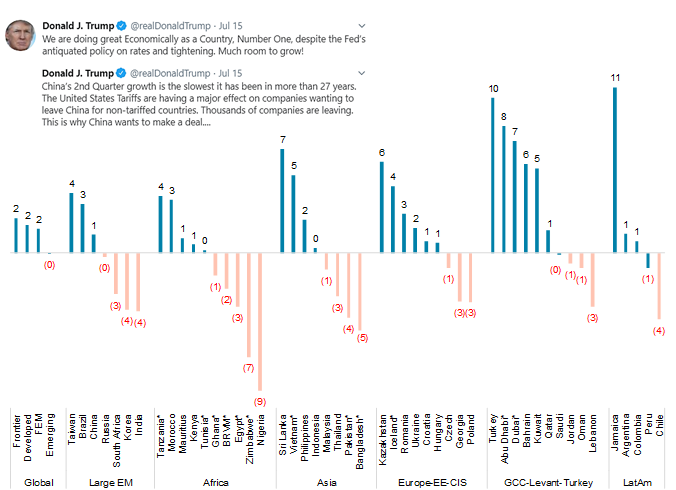 Jamaica (up 11%) continued its run as the best-performing market in FM and EM over the past year, driven by its largest stock, bank NCBFG (c21% yoy growth in Q3 EPS). The IMF’s most recent visit in June and comments to the local press by the local mission chief in July provided reassurance on both the macroeconomic gains (eg debt reduction, employment growth) made during the two successive three-year IMF programs (which started in 2013), and the likelihood of these continuing after the expiry of the current stand-by facility (November 2019).

Sri Lanka (up 7%) was driven by a improving FX reserves, partial recovery in tourist traffic, following hotel price cuts and proposals to re-establish visas on arrival (in the aftermath of the Easter terror attack) and the return of Gotabhaya Rajapaksa (a potential presidential candidate and brother of former President Mahinda Rajapaksa, after a period of treatment overseas for ill health). All sectors participated in the rally (with defensive CTC in tobacco an exception).

Vietnam (up 5%) saw a rally across diverse sectors (eg banks, consumer, utilities) as investors shrugged off concerns over US accusations in June of FX rate manipulation, territorial (oil exploration) friction with China in the East Sea/South China Sea in July and evidence of moderately slowing GDP growth (Q2 was 6.71% versus 6.79% in Q1). The completion of the EU free trade agreement may have acted as a catalyst for a revisit of stocks that have de-rated over the past year.

Kazakhstan (up 6%) was driven by 14% growth in copper output in H1 (which put KazMinerals output guidance back on track) and the petering out of protests against the election of President Tokayev, both of which offset a rash of accusations on unregulated online media targeting established politicians (and, potentially, a reflection of clan rivalries bubbling to the surface as former President Nazarbayev takes a back seat).

Iceland (up 4%) was driven by inflows related to MSCI FM inclusion (in June 2019, MSCI announced the potential inclusion of Iceland stocks, with combined 3.5% and 9% weights in, respectively, the MSCI FM and MSCI FM100 indices, in May 2020) and better-than-expected results from the largest stock, food processing equipment supplier Marel.

Nigeria (down 9%) seems to have almost no international investor interest, with stocks falling across all sectors (Lafarge was an exception, following its decision to exit its troubled South Africa business). Although oil revenues are relatively high, equity valuation is low relative to history and favourable external debt vulnerability indicators relative to similarly rated peers, inflation (and rates) remains sticky (which is both stifling growth and prompting local funds to allocate towards fixed income), macroeconomic policy is still prioritising FX rate stability over growth and consumer disposable income is shrinking (evidenced by continued trading down in brands). News of Nigeria signing up to the continent-wide free trade area (AfCTA, to which 54 countries have signed up but less than half have ratified, and which could help raise intra-continent exports from c20% of total exports to nearer the 60-70% range seen in Asia and Europe) or Buhari’s full list of cabinet appointments failed to provide a spark for equities. Instead, share prices proved more sensitive, negatively, to increased scrutiny and interference by the central bank on loan/deposit ratios, in order to stimulate loan growth, and the resumption of VAT on stock exchange activity.

Bangladesh (down 5%) was driven by increasingly ad hoc and punitive regulation of Grameenphone (tower sharing, bandwidth allocation, normal course of business regulatory approvals) and ongoing tight liquidity in the banks sector (where Brac remains an exception). Both of these issues appear to have become more acute following the Awami League’s landslide election victory at the end of 2018. The positive earnings surprises from Singer and Marico suggest that the consumer growth story (job creation, urban population growth, extreme urban population density) remains intact.