As well as our review of the month-to-date in frontier and emerging markets, we focus on the feedback from c80 meetings we have conducted with public equity fund managers globally in the past couple of months.

Given the cheap valuation versus history and relatively robust FX rates of most frontier and small emerging markets, the fundamental investment case has rarely looked more attractive and the life of a professional investor has rarely felt so depressing.

With Bahrain, Iceland and Kuwait stripped out, MSCI FM is on around a 10% premium to the five-year median price/book and has average daily traded value of c13% below the five-year average.

Small emerging markets, like Chile, Egypt, Indonesia, Mexico, Pakistan, the Philippines, Poland and the UAE, none of which have significant FX rate risk, are on about a 15% discount to the five-year median price/book and have average daily value of c8% below the five-year average.

The big 7 in MSCI EM (ie China, Korea, Taiwan, India, Brazil, South Africa, and Russia, which collectively make up over 80% of the index, are on around a 14% premium to the five-year median price/book and have average daily traded value of around double the five-year average. 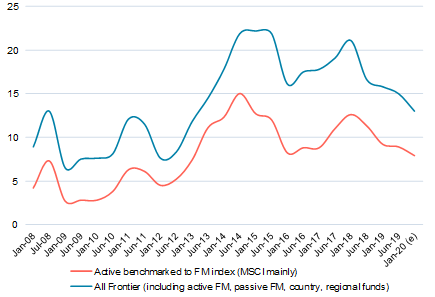 Phase 1 of a US-China trade deal, an overwhelming victory for Prime Minister Johnson in the UK, the US Federal Reserve’s signal of a prolonged period of low interest rates and deeper OPEC+ output cuts have all supported a sharp rally in the large emerging markets month-to-date.

Brazil (up 10% on tax reform progress, an interest rate cut, US tariff relief) and EM Tech (up 10% on trade negotiations relief, 5G mobile phone product cycle hopes) led the rally, with India lagging (down 3% on mass protests over the Citizenship bill and lower growth concerns).

Indonesia (up 7%) benefited from a 10% month-to-date increase in the palm oil commodity price (up over 50% since a four-year low in July 2019, helped by plans for biofuel-related demand in Indonesia and supply shortfall in Malaysia) and indications from the central bank of further interest rate cuts in the new year (after no change at 5% in December and 400bps of cuts over 2019) despite a slight reduction in the target inflation range (to 2-4% in 2020 versus 2.5-4.5% in 2019)

Pakistan (up 4%) lost some of its recent momentum with negative judicial verdicts on the extension of current army chief Bajwa’s extension and the treason trial of former army chief Musharraf. Meanwhile, the current account continues to shrink, carry trade capital inflow in local currency government debt continues and the latest IMF disbursal was made on schedule.

Bangladesh (down 7%) was hit by ongoing frontier fund redemptions and concerns over banking system liquidity and NPLs, sluggish exports, the ongoing dispute between Grameenphone and the regulator and health concerns for Prime Minister Hasina. We acknowledge all of these issues but regard them as baked into an equity market valued at a 30% discount to the five-year median price/book.

Sri Lanka (down 3%) saw the change of prime minister to the President Gotabaya’s brother, Mahinda Rajapaksa (a long time, former president himself), and the introduction of tax cuts, which should boost consumption-led growth but derail fiscal consolidation (the IMF deal expires in June 2020 and parliamentary elections are likely in April).

Vietnam (down 1%) saw large scale M&A with Vingroup’s sale of most of its interest in its supermarket retail business to Masan Group (a deal that appears much more favourable for Vingroup given the capital intensity of the business, the over-reliance on large format and the lack of core competence in retail of Masan). Month-to-date, Vingroup’s share price is flat, whereas Masan is down over 25%.

Kuwait (up 7%) had its upgrade to the MSCI EM index at the end of May 2020 confirmed (with potential US$3bn of passive inflow, equivalent to two to three weeks of average traded value, triggered by the 0.69% weight). We remain sceptical whether Kuwait has sufficient growth or the attractive valuation to sustain a rally beyond the EM index inclusion, with MSCI Kuwait on trailing price/book of 2.1x, a 36% premium to the five-year median, for merely 11.8% ROE, and on 17.8x forward price/ earnings for merely 10% consensus EPS growth in each of 2020f and 2021f.

Saudi (up 6%) saw the completion of the Aramco IPO (marketed to local and regional investors alone, raising cUS$26bn compared with US$46bn of dividends in H1 alone, after which the share price rose 11%), the passage of the 2020 budget (with an implied deterioration in the fiscal deficit from c5% in 2019 to c6.5% in 2020 and slight reduction in the fiscal breakeven oil price from US$80 per barrel to US$77 per barrel), deeper output cuts announced by OPEC+ (an additional 0.5mn barrels per day (bpd) until March 2020, or 0.5% of global output), a slight drop in total unemployment (12.0% in Q3 versus 12.3% in Q2) and convictions in the Khashoggi murder case.

Lebanon (up 6%) saw the appointment of Prime Minister Hassan Diab (supported by Hezbollah but opposed the Sunni bloc of former Prime Minister Hariri, as well as Christian and Druze parties), the continuation of mass protests, the cut to the credit rating outlook from stable to negative by Moody’s (this follows the cut in November by S&P from B to CCC on sovereign foreign currency debt), and the cut by S&P on Bank Audi and Blom Bank and Bankmed to selective default (from CCC).

Oman (down 2%) sold 49% in the state-owned electricity transmission company to China-owned State Grid Corporation and stated plans to list 20% to 25% of the state-owned oil company by the end of 2020. The IMF forecasts fiscal deficits of 8.4% and 6.5% in 2020 and 2021, respectively. Sultan Qaboos (aged 79) returned to Oman after a week in Belgium for medical treatment.

Chile (up 12%, with 7% FX rate appreciation) and Colombia (up 10%, with 6% FX rate appreciation) recovered after months of protests. We suspect that the underlying causes of protests (economic inequality in both countries, although in Colombia, despite vulnerability to homegrown and cross-border insecurity, the protests have been less violent) will not be resolved easily or any time soon. The agreement of the government in Chile to a vote on constitutional change in April 2020 does not appear to have dispersed protestors any more successfully than the subway fare hike withdrawal or the proposals for a minimum wage, higher pensions or an electricity tariff freeze. Furthermore, we expect paralysis in government to persist (and this, for example, will hinder market-friendly reforms and fiscal consolidation under President Duque in Colombia).

Argentina (up 9%) benefited from President Fernandez winning emergency powers from Congress to renegotiate with creditors and make fiscal changes to wages, pensions and taxes (in return for conceding lower export and agricultural taxes than originally planned). MSCI retained Argentina in its EM index (Argentina was upgraded in May 2019) because its five constituents are foreign listings and depositary receipts (ie capital controls impacting the accessibility of locally listed stocks are not relevant as yet; this may change if future dividend distribution to ADR holders is hindered). Unsurprisingly, S&P cut the long-term foreign currency sovereign credit rating from CCC- to selective default and long-term local currency sovereign from CCC- to CC.

Africa: Kenya powers past our concerns, Nigeria keeps selling off

Kenya (up 5%) was helped by a 2% appreciation in the FX rate and SAFCOM’s launch of a new savings product. We are concerned that Kenya has an expensive FX rate, twin deficits and that its largest equities (MSCI Kenya) are valued at nearly a 60% premium to the five-year median price/book.

Ghana (up 3%) saw mixed news in its oil and gas sector with Springfield’s deep-water discovery (potentially 750mn barrels of oil reserves, close to the size of Ghana’s largest field, the Jubilee field) offsetting lower production outlook (100,000bpd to 70,000bpd for the next three years) from Tullow (the operator of the Jubilee field).

Nigeria (down 1%) passed its 2020 budget with an assumed oil price of US$57per barrel and oil output of 2.18mn bpd (approximately consistent with current levels) and an implied fiscal deficit of 1.5% (much lower than the IMF’s forecast of 4.7% for 2020). The passage of the budget before the end of the prior year is unusual and reflects the control President Buhari’s loyalists command in both houses of Parliament. 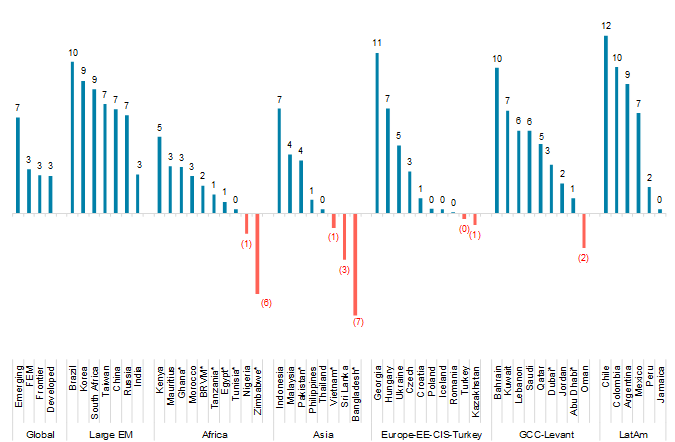