We pick out this month’s equity market highlights with our updated country database and links to published research links. We focus on three of the worst performing markets on a one-year view: Argentina, Nigeria and Pakistan. They have underperformed MSCI FEM by 26% to 43%, are valued at 23% to 41% discounts to five-year median price/book and, in the case of Nigeria and Pakistan, are seeing liquidity (daily traded value in equities) 44% to 77% below five-year averages. Pakistan stands out as the best candidate for a revisit with orthodox economic policy and positive structural transformation (in politics, fiscal management and infrastructure).

Argentina was down over 40%: a broad-based decline (e-commerce play Mercado Libre was the exception), after Mauricio Macri’s worse-than-expected presidential primary election defeat. Other particularly weak markets included Brazil (down 9% on weakening growth outlook), Iceland (down 6% on a weaker outlook for the banks from S&P offset good results from Marel and Arion), Mexico (down 6% as previously robust consumer confidence fell for a fourth month in a row and ongoing Pemex and fiscal concerns offset potential progress on gas pipeline renegotiations), Poland (down 9% on accelerating inflation and the central bank’s signal that this will not prompt interest rate hikes), Turkey (down 11% on central bank borrowing to meet fiscal needs, the exit of central bank staff hired by the previous governor, the removal of mayors with alleged links to banned Kurdish militants, all offsetting relatively robust banks results), and South Africa (down 12% on falling business confidence, Eskom woe). At the stock level, Africa e-commerce play JMIA (down 22% on results, which confirmed fraud and cash burn concerns) was a notable underperformer.

Notable outperformers were Egypt (up 7% after lower-than-expected inflation and a 150bps interest rate cut to 14.25%, with real estate stocks PHDC and SODIC up over 20%), Oman (up 8%,across all sectors, after a 70% smaller fiscal deficit yoy in 5M 19); Pakistan cyclicals (MLCF, DGKC in cement, HCAR in autos, PAEL in white goods) were up 15%-20% despite weak sales volumes due to further narrowing of the current account deficit (down 73% yoy in July mainly due to lower imports and the Saudi oil facility), falling long-term local currency government bond yields, the Army chief’s extension and the government’s decision to limit the anti-corruption agency to probing public office holders (not private sector individuals).

It is in Pakistan that this consensus view is the most unfair and therefore, this is our favourite of these three distressed markets. Argentina is second; the next government may not be as market-unfriendly as feared but external vulnerability remains very high and resident capital outflows historically spike in the run-up to elections. Nigeria is our least favourite: it is cheap, no doubt, but so are the others, and it shows the least sign of a significant change in policy framework and has not made the progress (either in terms of raw growth or structural change) that we would have hoped for during the period since mid-2016, during which oil output and price recovered.

We discuss more on these three markets below before our regular FM and EM data appendix (charts on performance, liquidity and valuation, as well as our country market-macroeconomic-political database). 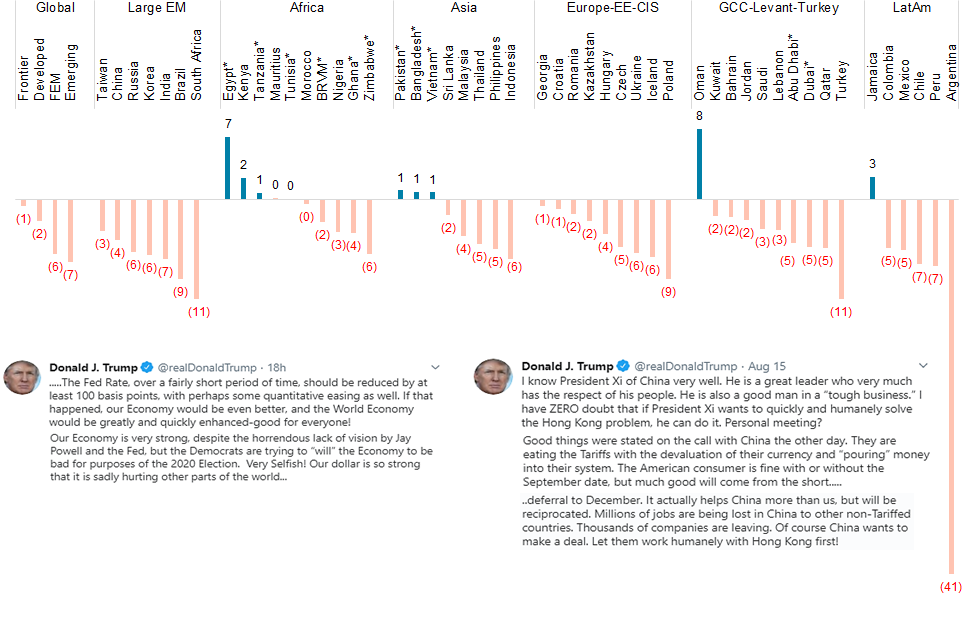