Frontier-EM Equity Monthly – April: Bounce, but not necessarily from the bottom

EM up 4%; Technology outperformed (with the five tech stocks – Alibaba, Tencent, TSMC, Samsung, Naspers – which account for almost a quarter of the EM index, up 7%, weighted by their index contribution). Russia (up 8%) benefited more from the resumption of OPEC+ cooperation, a fiscal stimulus plan of 2% of GDP, and a 50bp policy rate cut, than it suffered from the continued fall in oil price (Brent down 9%). Brazil (down 6%) fell on late coronavirus action, disagreements between President Bolsonaro and the heads of his Economy and Justice ministries, the Supreme Court investigation Bolsonaro faces, and further BRL devaluation (-7%).

FEM up 3%: Vietnam (8% weight in the index, up 17%) outperformed (across all sectors) on high confidence in Covid-19 containment and an expanded fiscal stimulus (3.5% of GDP). Kuwait (20% weight, down 1%) underperformed after the MSCI decision to postpone EM index inclusion from May to November (which postpones passive inflows), delays in parliamentary passage of the sovereign debt ceiling law (which constrains fiscal space), and amid the continued fall in oil price.

In other small EM, Pakistan (up 14%) was helped by an even fuller reversal – with IMF consent – of austerity (cumulative 425bp policy rate cut since mid-March, fiscal package of 2.5% of GDP, US$1.4bn disbursed via an IMF Rapid Financing Instrument to combat Covid-19) and partial re-opening of the economy (eg construction). The IMF was also unequivocal in its warning that rapid donor support remains critical. The UAE (up 13%) was buoyed by partial re-opening of the economy (malls and offices) and hopes around the fiscal stimulus (2% of GDP) and banking regulatory easing (potentially up to 20% of GDP). Thailand (up 11%) was boosted by a net fiscal stimulus package of 6% of GDP and phased lockdown easing. Mexico (down 6%) was driven by FX depreciation (in turn due to current account pressure from lower oil prices and a 100bp policy rate cut).

FM up 3%; Nigeria (up 11%) outperformed despite a queue for FX repatriation, accelerating inflation, fiscal budget cut, continued oil price decline, and the Covid-19 related death of a close ally of President Buhari. The move was entirely driven by local investors (who face restrictions on investing in high yielding open market operations auctions). Kenya (up 3%) seemingly paid little attention to further deterioration in the locust threat (agriculture is c35% of GDP). Three markets have been shut throughout April: Bangladesh (may re-open on 5 May), Jordan, and Sri Lanka (may re-open on 4 May).

Our published reports this month have looked at the following issues:

The rest of this report comprises the following:

April in the markets 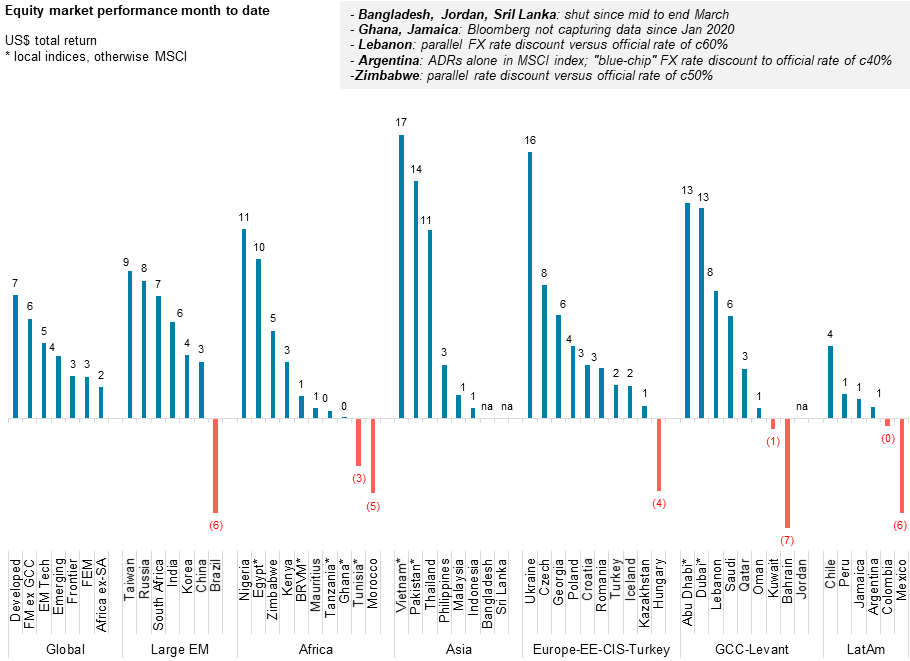