Fortune favours the brave: The markets where VCs fear to tread

Low interest rates and plentiful liquidity have created an attractive environment for tech disruptors to raise capital – venture capital (VC) funding is at record levels, and the ranks of start-up unicorns continue to multiply.

But these capital flows are by no means evenly distributed; while some sectors (like fintech) and markets (like the US) are getting flooded, others still face drought-like conditions.

For VCs that are brave enough to stand clear of the crowd, and don’t need to commit in size, investing off-the-beaten-track could help them deliver superior returns to their investors.

In this report, we look at where VC funding flows have concentrated and identify markets that are not yet receiving their fair share of the pie.

VC hotspots rely on the confluence of ideas, capital and talent

The state of Massachusetts in north-eastern US tops our ranking of venture capital funding flows per capita, with the equivalent of US$4,400 committed to each of its 7mn inhabitants last year. Institutions such as MIT and Harvard University ensure a steady stream of ideas and talent, while proximity to the financial centres of Boston and New York is also helpful.

The states of California and New York also score highly on this measure, while, at the country level, Singapore, Israel and Estonia top the global ranks. 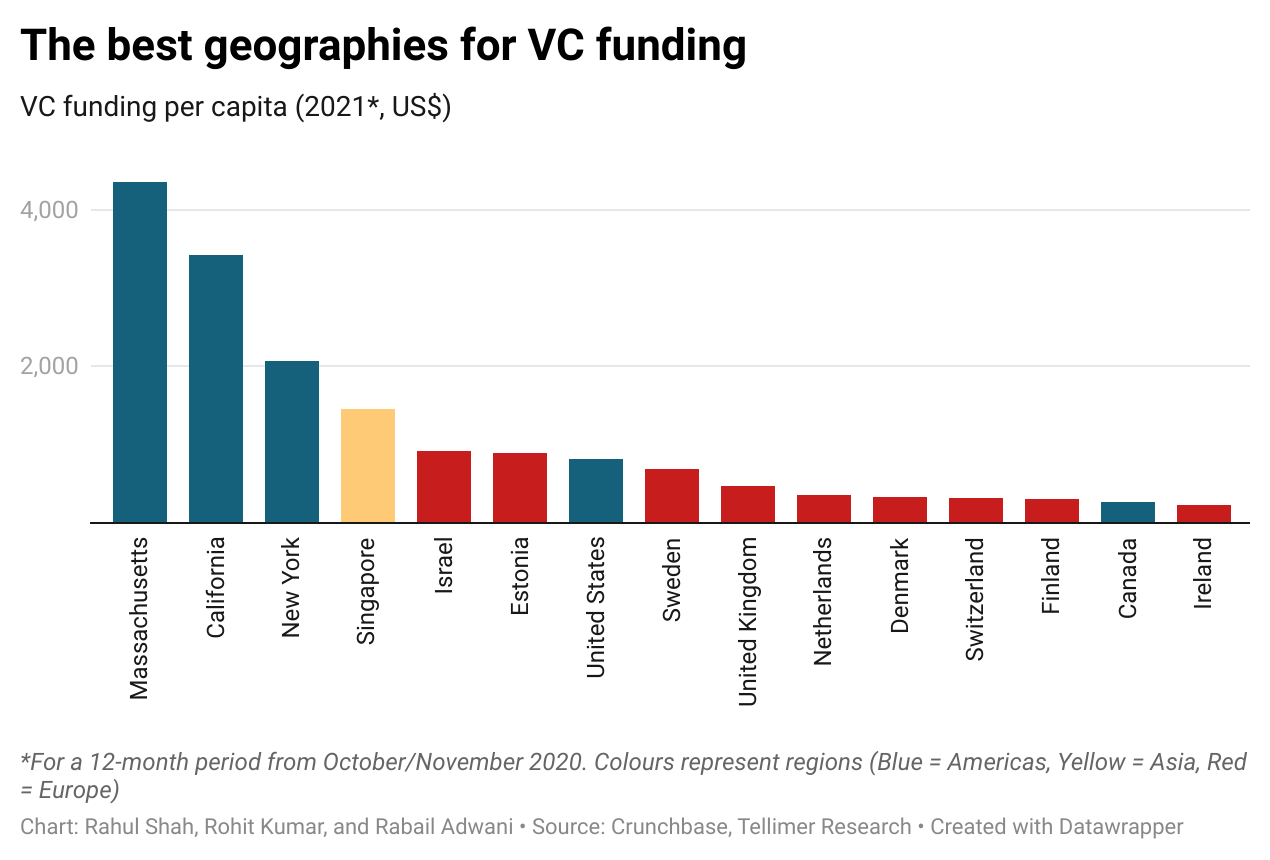 At the other end of the scale, many emerging markets are attracting less than the equivalent of US$10 in VC funding per capita. Start-ups in such markets are much more likely to face capital constraints to their growth potential. 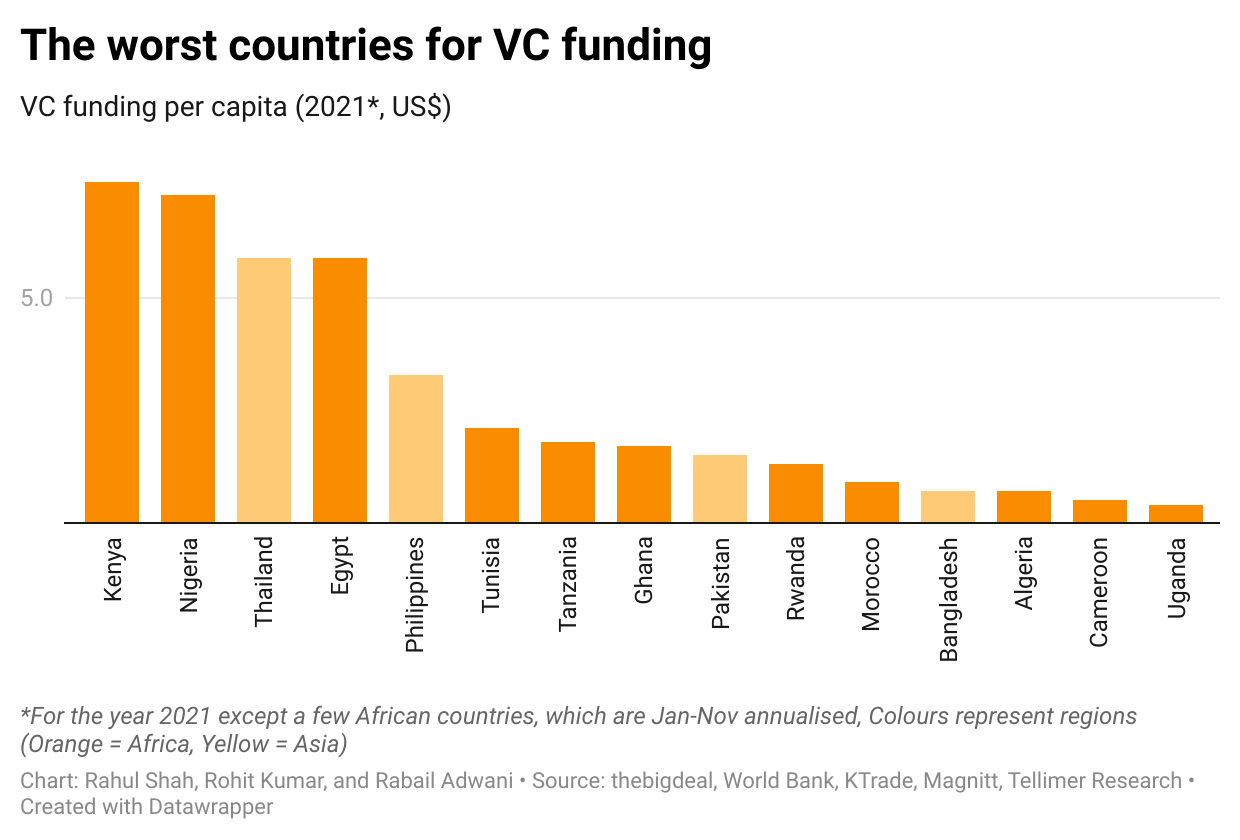 Why access to funding is so important for tech startups

According to our proprietary global survey of 215 unlisted fintech firms across 14 emerging markets, access to funding/capital is the main growth constraint these firms face. Fintech capture the largest proportion of VC funding in many markets, but we think firms in other sectors would also place high importance on securing funding. 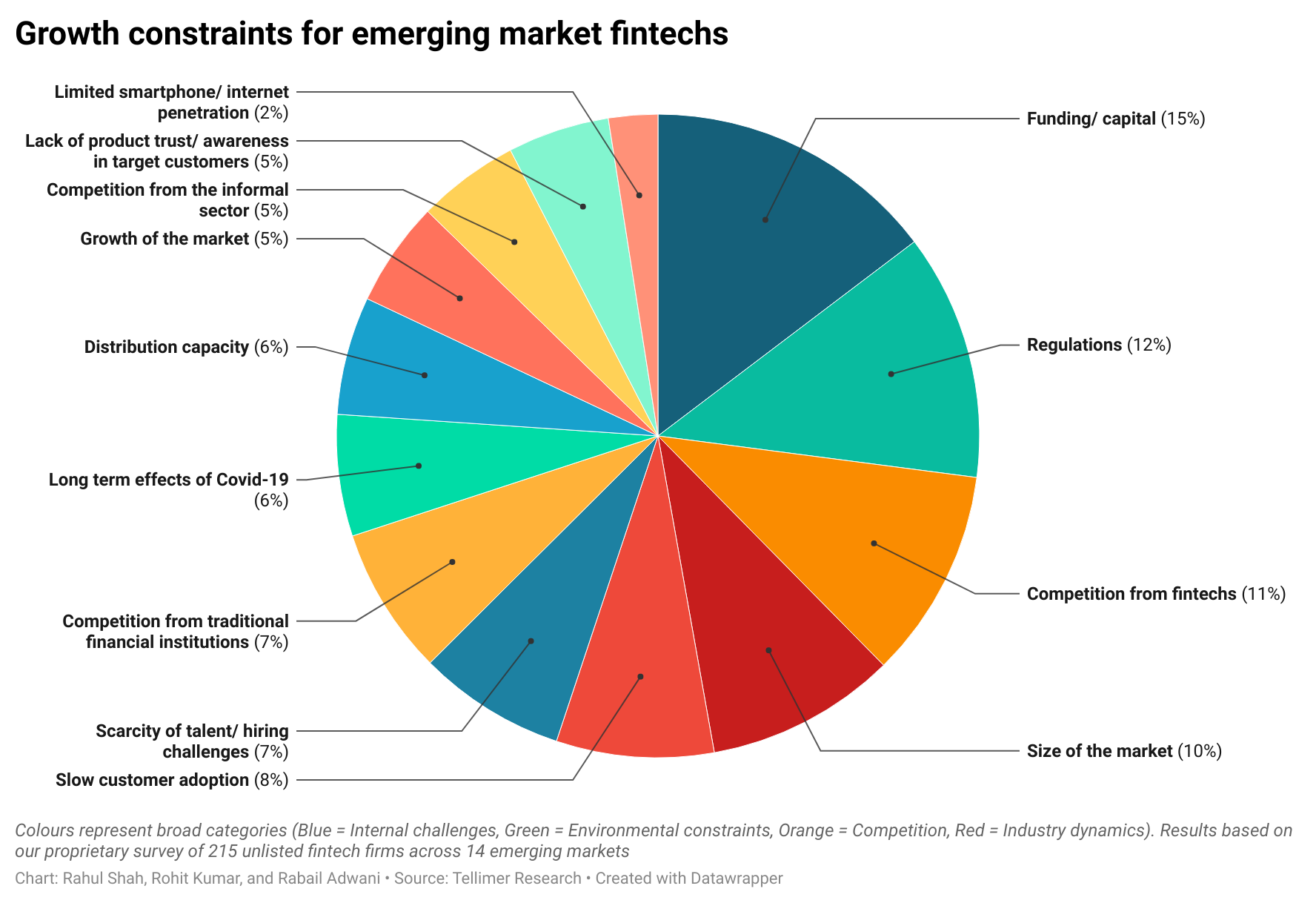 Of course, there is no reason why VC funding per capita should be equal across markets. Differences in income levels, regulations, political stability, demographics, education, health care, etc., are all relevant factors. But it is also likely that VC capital allocation is not wholly efficient; capital directed to markets that are receiving insufficient VC attention could generate superior returns.

One relationship that seems to make sense is that wealthier economies tend to attract more venture capital. But VC flows in some markets (notably, Massachusetts, Estonia and India) seem to punch above their weight, while flows elsewhere (such as Belgium and Saudi Arabia) look undersized. 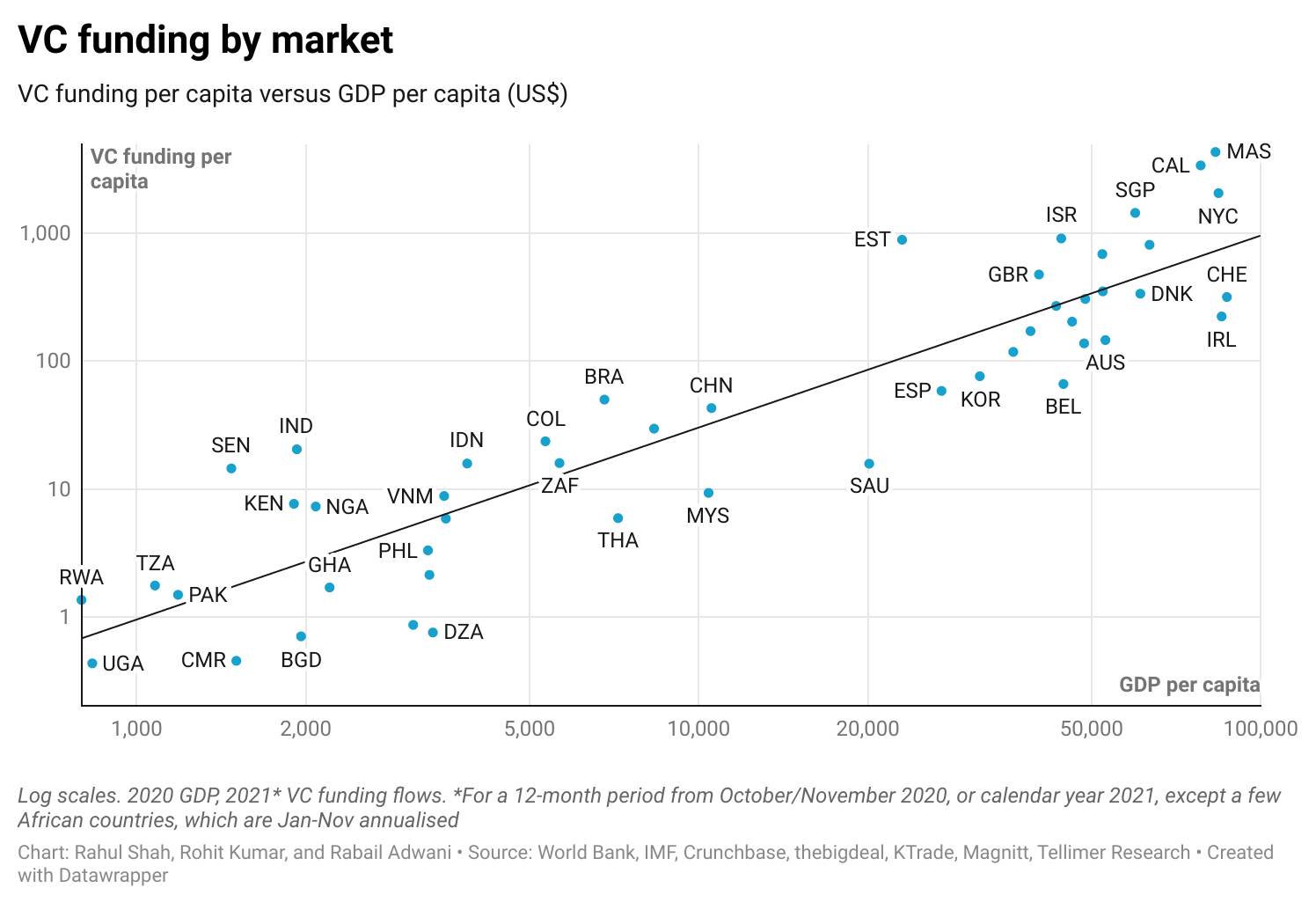 Focusing on emerging markets, we see that the larger markets (such as China, India, Brazil and Mexico) tend to attract more than their fair share of VC funding. This makes sense as VCs may feel more comfortable making investments in markets that they have already researched well, and given that building a leadership position in these big markets could provide a foundation from which to expand abroad. 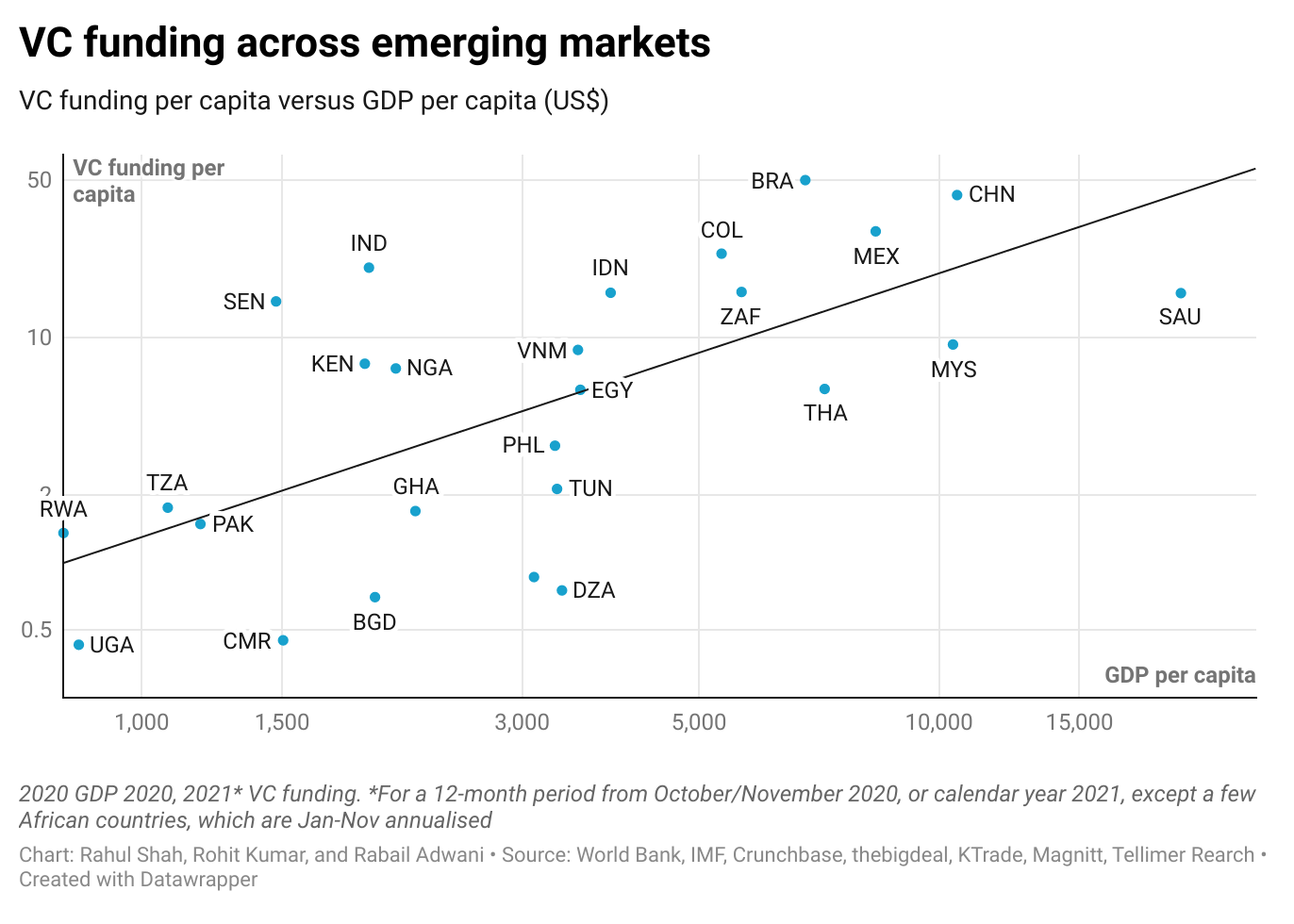 Of course, most VC funds have significant manpower constraints; it may not make sense for them to devote time to some of the opportunities highlighted in the chart above (for example, Algeria –DZA) because the economic opportunity is still too small.

Below, we highlight some of the most crowded VC locations and also the biggest VC opportunities, in absolute terms.

The US is the undisputed VC king but, even here, there are areas of neglect

Venture capital investment flows to US-based companies totalled US$269bn from October 2020 to 2021, second-placed China’s US$61bn figure. With many US VC funds also having a sizeable international portfolio, it is clear that the country is the undisputed industry leader. Unsurprisingly, California, home to Silicon Valley, is the largest state for VC volume (US$135bn), with New York and Massachusetts taking the remaining spots on the US podium.

Looking at the data on a per capita basis, and adjusting for the relationship with per capita wealth highlighted in the charts above, we can see that each of these three states attracts more VC funding than might be expected, helping to push the overall VC funding volume in the US into surplus territory.

At the same time, it is clear that, away from the coastal hotspots, much of the country is missing out on the VC funding deluge. 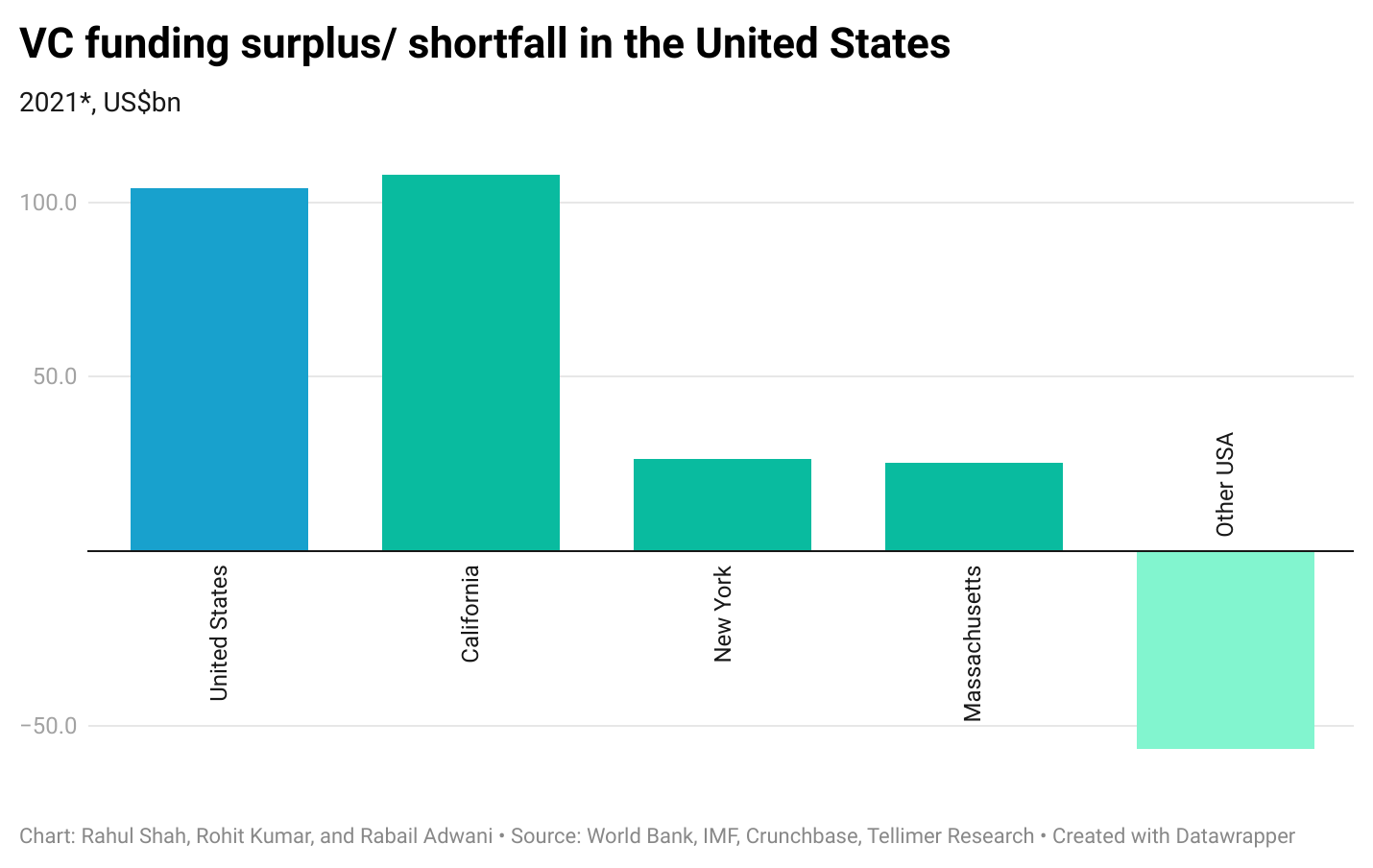 Continental Europe is not attracting its fair share of VC investment

The key region experiencing a VC funding shortfall (based on the VC funding to GDP per capita relationship highlighted above) is Europe. While the UK, Israel and Sweden have seen strong investment flows, most continental European markets are not seeing the volumes they should. This may reflect the continent’s well-documented challenges for entrepreneurs (high unit costs, employee-friendly regulations, etc.) and a lack of risk appetite from capital providers. 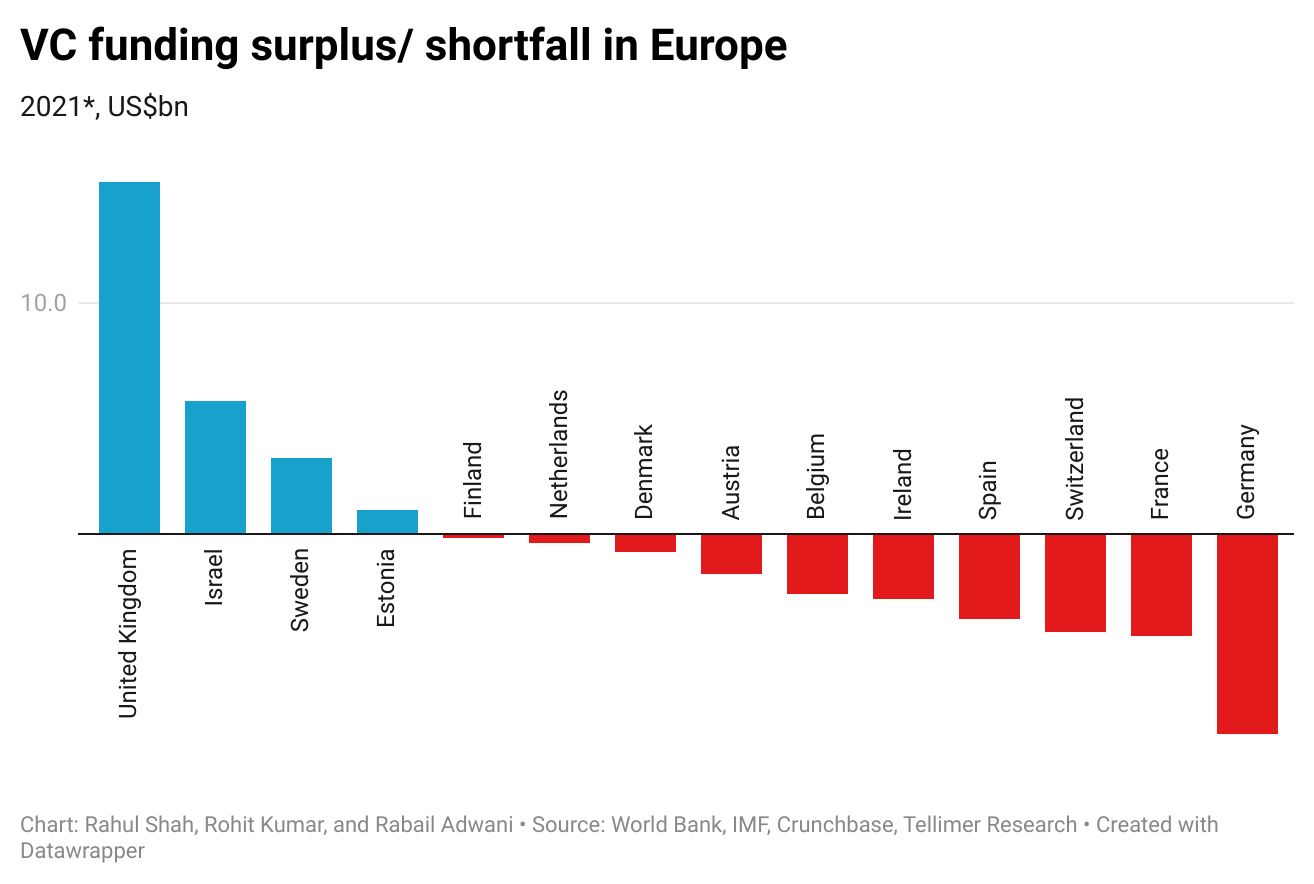 The picture in Asia is mixed

In contrast, South Korea’s VC inflows have been below what might be expected, given the high sophistication of this economy. 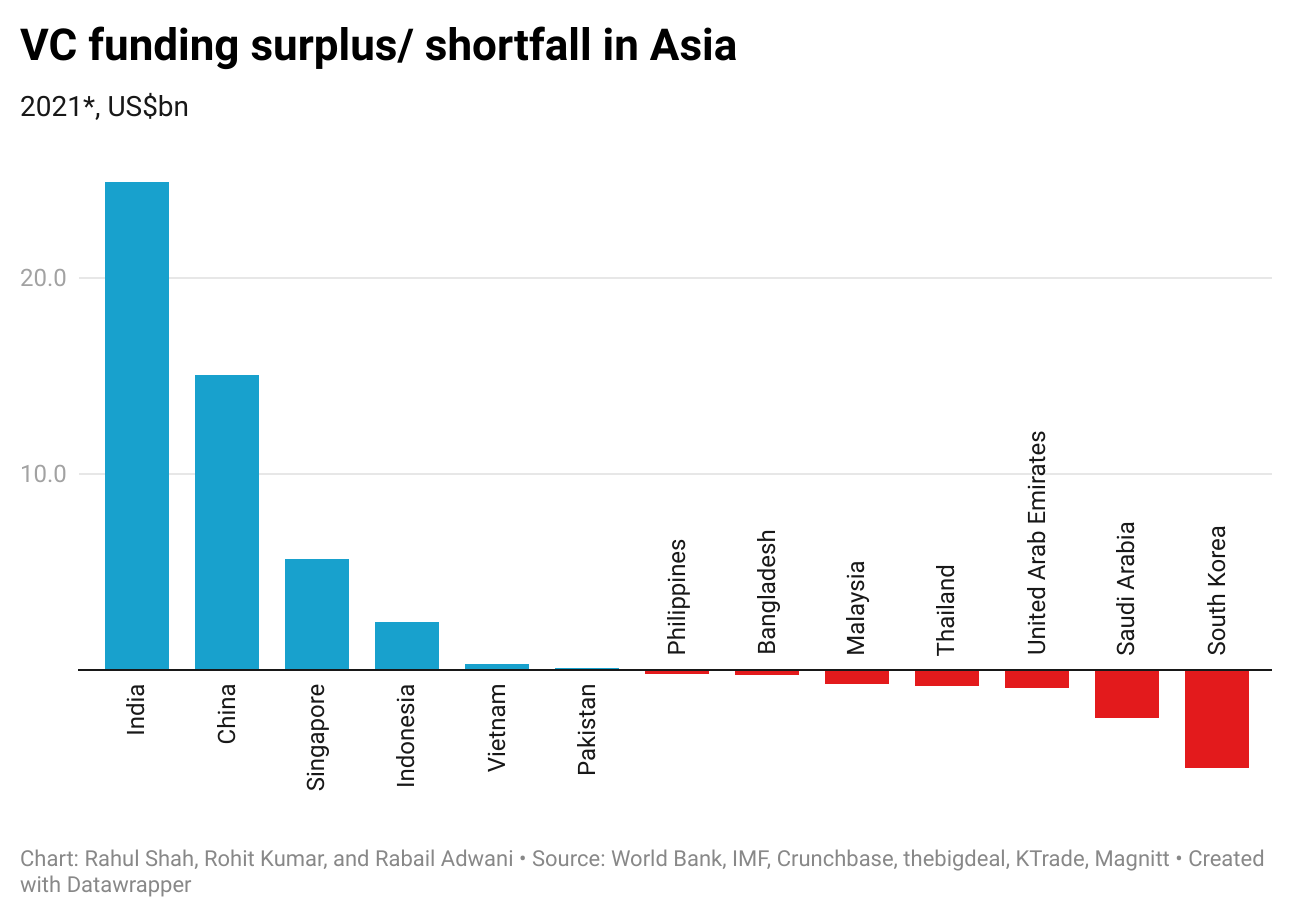 VC investors are crowding into the largest emerging markets

The most populous emerging markets (such as India, China, Brazil and Indonesia) are also those that are attracting more VC investment than their income levels warrant. We think this is because many VC investors are focused on identifying world-beaters, which may be more likely to emerge from the biggest individual markets. But, due to their limited in-house resources, these investors may also feel more comfortable investing in markets they already know.

In contrast, most emerging markets are not attracting as much investment as they should, based on their income levels. Many of these economies are small, but this is not universally the case. Saudi Arabia and the UAE are key counter-examples; success here could be a launching pad for the GCC and wider MENA region. Other emerging markets with sizeable (>US$1bn) VC funding shortfalls include Thailand, Malaysia and Bangladesh.

While many startups can now command US$1bn+ valuations, for smaller funds, a focus on some of these underserved emerging markets could help to deliver outsized investment returns. 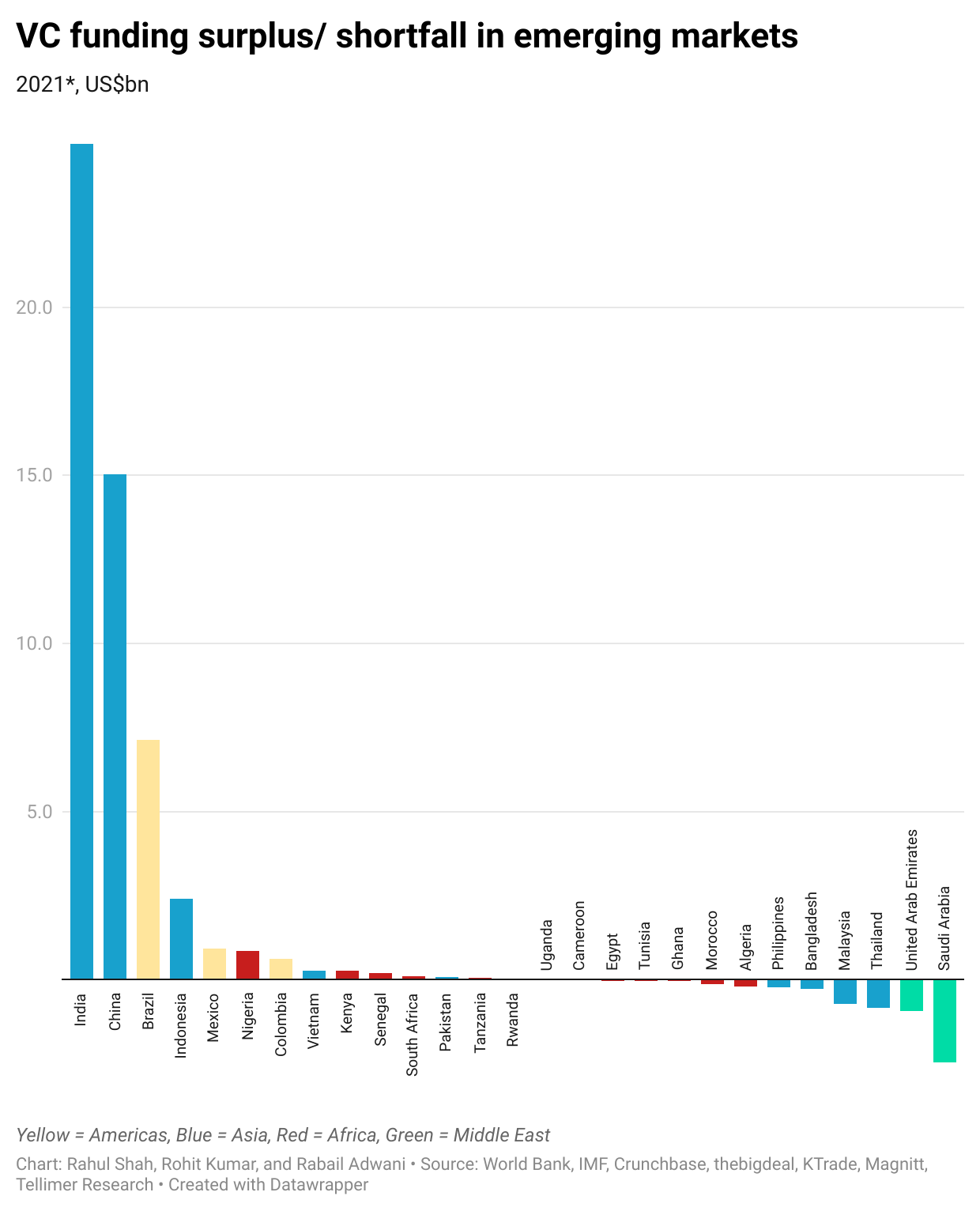