A strong performance in stocks yesterday, the inability of Congress to press ahead with President Biden's spending programmes, and the strong EUR have all weighed on the USD heading into the weekend. Since late September, the trade-weighted USD sank to its weakest levels and will likely consolidate these levels heading into the weekend, when the G20 meet and the COP 26 summit follows. Furthermore, there will be some position squaring ahead of the FOMC decision next week, resulting in the USD losing some ground.

Egypt: In a statement published on Thursday, the World Bank’s Board of Executive Directors announced that they granted a $360mn Development Policy Finance loan for Egypt to support its second wave of economic reforms. The loan was granted under the “Egypt Inclusive Growth for Sustainable Recovery” Program that the WB launched to support Egypt’s second wave of structural reforms by creating jobs and providing an inclusive enabling environment for the private sector to lay the basis for a sustainable recovery. The WB also noted that to further support the achievement of the operation’s development objectives, the Asian Infrastructure Investment Bank is considering parallel financing for the operation of the same amount using the same package of policy reforms agreed with the World Bank.

Egypt: Supply Minister Aly El-Moselhy was on the wires yesterday saying that the government is in talks with Citigroup Inc. to reach a deal on hedging against global wheat-price increases as the country struggles with rising commodity prices. El-Moselhy added that the ministry has also asked the Finance Ministry to reach a deal on hedging against vegetable oil prices increases. The move comes as the government announced a price hike for subsidized cooking oil and re-entered the wheat market after balking earlier at the high prices. Egypt already hedges against oil prices, and the move to adopt a similar approach for key commodities reflects mounting concern about the spike in global prices at a time when the government is looking to trim a costly food subsidy bill.

Ethiopia: In a boost for the country’s foreign currency income Ethiopia is projected to earn $165mn from coffee exports in the second quarter of its current fiscal year, which began on July 8. Coffee exports are estimated at 52,756.5 metric tons, of which 21,226.5 tons will be sold to overseas markets in October, 15,928 in November, and 15,602 in December. Ethiopia plans to export a total of 280,000 tons of coffee this year, earning about $1bn. Ethiopia has expanded its coffee export market to include China, which is currently the seventh-largest importer.

East Africa: In a report published by the African Development Bank, 13 East African economies are projected to collectively expand by 4.1% this year from 0.4% last year. The AfDB added that East Africa is the only region on the continent to have avoided a recession in 2020, thanks to agriculture, sustained public spending on large infrastructure projects, and increased regional economic integration. However, the AfDB did warn that a slow rollout of coronavirus vaccines and risks further waves of infections could dampen the growth outlook in the region.

Morocco: The Moroccan government yesterday approved decrees suspending the import duty on durum and soft wheat. While a government spokesperson provided no further details, rhetoric earlier this week from the Agriculture and Fisheries Minister Mohammed Sadiki indicates that the suspension of import duties for wheat aims to stabilize domestic prices.

Zambia: Finance Minister Situmbeko Musokotwane will today present the 2022 National Budget to parliament. The 2022 budget presentation will be monitored both domestically and on the international front as it provides the first litmus test of the new government led by President Hakainde Hichilema on whether they intend to deliver on the campaign pledges. The budget will be scrutinized for signs of prudent debt management, transparency, accountability, and a greater commitment to economic recovery and development.

Ivory Coast: The Ivory Coast has received EUR 1.4bn of debt relief from France. The deal signed by the countries forms part of a debt reduction development mechanism that will allow the country to transform bilateral debt into development aid. The funds will be used to boost agriculture, urban development, efforts to preserve biodiversity and provide training jobs.

Mozambique: In a statement released on Thursday, Minister of Mineral Resources and Energy Max Tonela said that Mozambique is planning a sixth oil and gas licensing round this year. Tonela added that the country will open the tender for the licensing round, which was delayed from last year due to the coronavirus pandemic. Mozambique has identified 16 areas for licensing round, and the process is expected to be concluded in Q3 of next year.

Forex: Inflation in Zambia slows to a 10-month low in October, partly due to sustained currency strength

Headline inflation in Zambia slowed further in October, coming in at a 10-month low of 21.1% y/y from 22.1% y/y in the month prior. On m/m basis consumer prices climbed 0.4%. A breakdown of the data shows that food price inflation, a major contributor to the headline reading, retreated further from record-high levels. Inflation in Zambia has slowed for the third straight month in October, and is also partly attributed to the effects of the Zambian Kwacha’s two-month world-beating rally at the start of Q3 still filtering through. 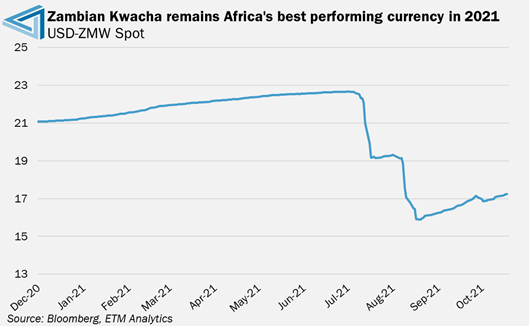 A continued slowdown in inflation will further ease the pressure on policymakers at the bank of Zambia to tighten and provide it with some room to further support the economy’s recovery. That said, it is worth noting that the Bank of Zambia earlier this month indicated that it remains committed to raising its key interest rate should the disinflationary process be slower than expected in returning inflation to within the target range of 6%-8% by the second half of 2023.

While inflation remains above the BoZ’s target of 6%-8%, the BoZ expects it to decelerate faster towards the target range on the back of the favourable outlook for the exchange rate and improved fiscal consolidation efforts. While the Zambian Kwacha has come under some selling pressure in recent weeks, the broader bias remains bullish. For context, the Kwacha is Africa’s best-performing currency on a year-to-date basis against the dollar, gaining 22.73%.

South Africa has made its way back into the spotlight this week with swaps and bonds both taking heavy blows. South African swaps have been paid higher, with the 1-year tenor rising by 13bps yesterday to around 4.520%. This is so far the largest single-day gain for the tenor in over 18 months and comes off the back of Brazil’s notable rate hike on Wednesday night (150bps) and some renewed pressure on the ZAR. 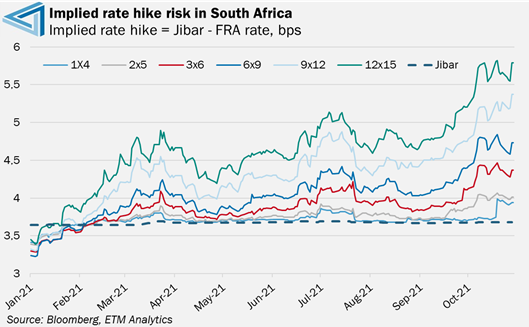 The 2-year tenor also rose sharply, climbing by 19bps to 5.4520%, flattening the curve to suggest that rate hike pressures are building ahead of the SARB announcement next month. The 10-year tenor, for context, climbed by 7bps. The 10v2 spread, as a result, has narrowed to just 238bps, the smallest gap seen since the onset of the pandemic in March last year.

As we have seen in most economies, pressure is building on the central bank to hike rates as inflation accelerates. We still, however, see room for the SARB to keep rates on hold at least through the remainder of the year as inflation will begin to slow over the coming months and the narrowing of SA’s output gap will stall, especially in light of the recent load shedding.

Egypt is amongst the top investment destinations in the world this year. This is reflected by the significant increase in foreign ownership of Egyptian bonds this year. For context, foreign ownership of Egyptian bonds has risen to around $33bn from as low as just over $10bn in May. Underpinning the demand from foreign investors for Egyptian bonds has been a combination of attractive yields on offer and prudent fiscal policy. Note that Egypt has amongst the highest real interest rates in the world, which in an environment of low rates globally makes Egypt a standout investment destination. 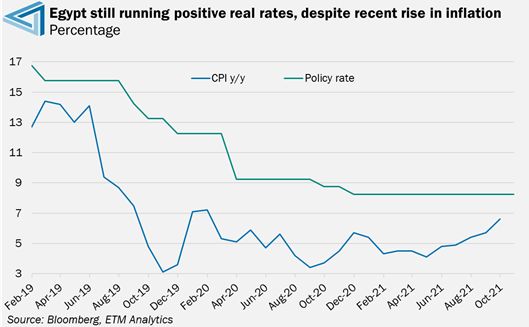 Cementing the high positive real rates in Egypt was the central bank’s decision to leave its benchmark policy rate unchanged on Thursday at 8.25% and the lending rate at 9.25%. The Central Bank of Egypt signalled in its policy statement that it is well-placed to ride out the potential effects of Federal Reserve tapering and a spike in global inflation, given the prudent manner in which it has conducted monetary policy in recent months. The central bank noted that it is keeping a watchful eye on inflation after headline inflation rose to a multi-month high of 6.6% last month amid surging food prices.  Note that inflation remains well within the central bank’s target range of 5%-9%.