For the love of the game: A spotlight on emerging market sports franchises

Manchester United’s owners are entering into discussions with new investors. Press reports suggest a valuation of US$6bn is being sought. This appears reasonable in the context of the US$5bn at which Chelsea FC recently changed hands, but is substantially above the current US$2.5bn market capitalisation of the shares.

That decision may have been accelerated by the news that superstar Cristiano Ronaldo’s contract with the club has been terminated with immediate effect. He had recently criticised the club for a lack of investment. Other catalysts include rising debt servicing costs due to higher policy interest rates, and the increased level of investment required to regularly compete at the top level, notably due to the entry of sovereign-linked owners at several major European clubs.

Recent ownership changes at Chelsea and Newcastle United, and the news that Liverpool is in talks with potential investors, have also likely informed Manchester United’s decision-making. Despite a decade of underperformance, it is still arguably the pre-eminent sports franchise in the UK.

On the back of these developments, investors may be tempted to seek out other sports franchises with large catchment areas and a strong emotional attachment with their fans. We highlight below some examples in emerging markets.

For investors looking to gain exposure to association football, Turkey appears to be the most accessible market. The 'big three' Istanbul clubs (Besiktas, Fenerbache and Galatasary) are all based in this 15mn-strong metropolis that straddles both Europe and Asia. Trabzonspor is another option. Home stadium capacity for these clubs ranges from 40,000 to over 52,000, and the passion of their fans is legendary (a 2007 Besiktas home match against Liverpool holds the record for the loudest crowd noise). One big advantage these clubs have is the opportunity to access the lucrative UEFA Champions League competition.

Interestingly, their valuation multiples are more elevated than other listed clubs that regularly appear in this competition, such as Juventus, Dortmund and Ajax. Further afield, Bali United, founded in 2015, competes in Indonesia’s Liga 1 (‘Super League’), a competition they won in 2019 and 2022. Their stadium’s capacity is around 18,000. This firm trades at the highest multiple of sales within our sample.

Note that most of these clubs are generating negative EBITDA, highlighting that the players may be the biggest winners from the money being thrown at the game. 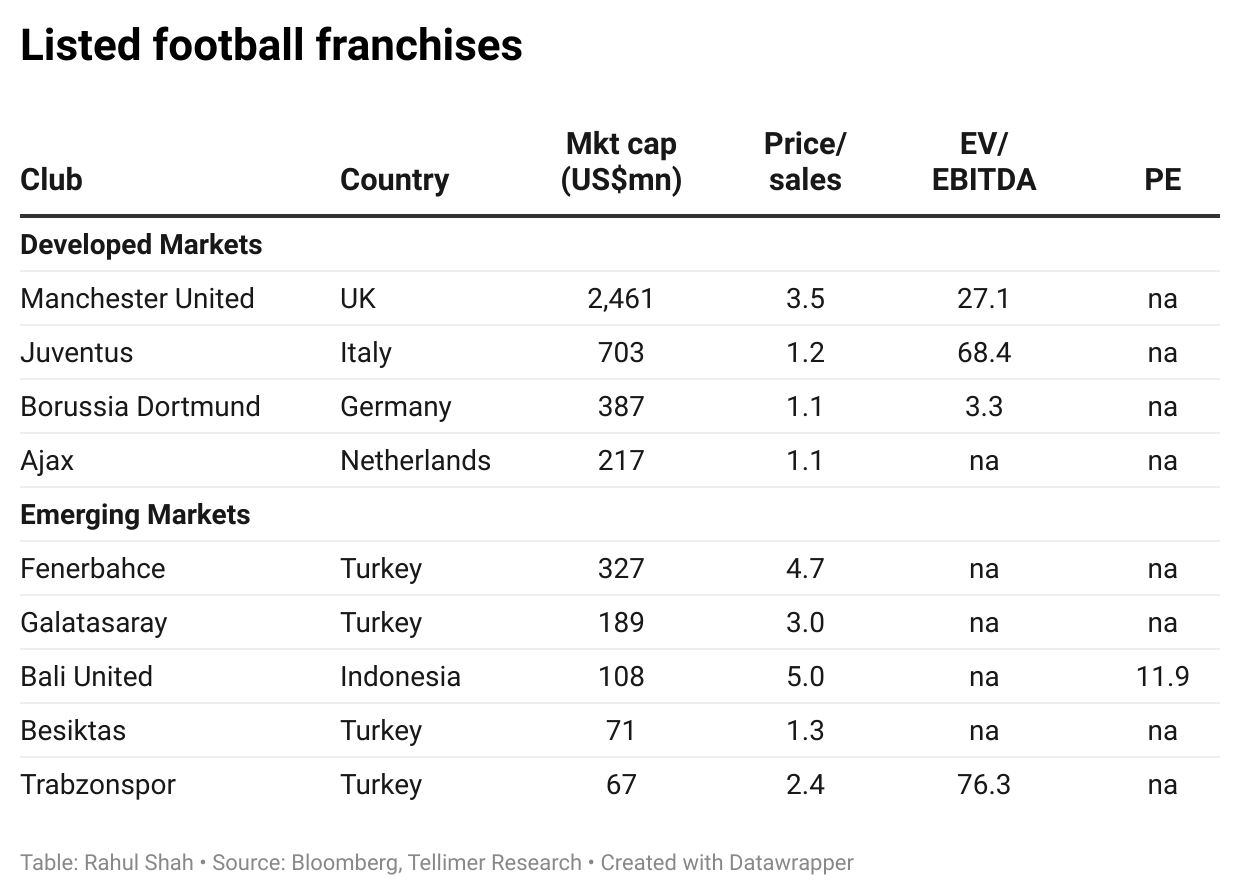 Listed EM businesses with exposure to other sports

Looking at other sports, Lisheng Sports (Shanghai) provides exposure to motorsports, a sector that is likely to benefit from growing car ownership in China. However, the recent cancellation of next season’s F1 Shanghai Grand Prix race highlights the challenges spectator sports are facing from China’s strict Covid policies.

More broadly, video gaming is an area that is likely to gain traction as technology improves, both as a participatory activity and as a spectator sport. Most emerging market listed firms with exposure to this industry are based in China, but Poland’s CD Projekt provides a rare large-cap alternative outside this market.