Oil continues to alternate between gains and losses this week, with the market marginally bid this morning with the focus on ongoing supply disruptions. Protests in Libya continue, and the country’s oil production has dropped to around 800k barrels a day as a result of a closure at its largest oilfield. Loadings have also been suspended at several key ports with the state-owned National Oil Corp declaring force majeure in order to halt exports. Just a week ago, Libya was producing around 1.3mn barrels a day to give some context to the scale of the supply disruptions there.

Meanwhile, Russian output has fallen by just over 8% through April so far when compared to March, with the nation averaging around 10.11mn barrels per day. This is the steepest drop in output since May 2020, when OPEC+ implemented their output curbs to support prices in the wake of the COVID outbreak. Even with the decline in output, Russia’s oil exports have increased 15% through April compared to the average for the period, highlighting the little impact the global sanctions have had. This increase in exports is partly why we haven’t seen prices surge back towards early March levels, despite constant talk from Europe regarding banning Russia’s crude.

Ghana: Ghana’s posted a solid recovery in 2021 as the economy rebounded from the devastating impact of the strict Covid lockdown measures in 2020. Specifically, Ghana’s economy expanded by 5.4% in 2021 after growing by a revised 0.5% in 2020. The 2021 GDP print came in higher than the Finance Ministry’s estimate of 4.4% and above the government’s forecast of 5.3%. The strong 2021 GDP reading came on the back of growth of 7% in the final quarter of last year. While the stronger than expected Q4 GDP print is encouraging, economic activity in Ghana has suffered at the start of 2022 on the back of tighter monetary policy conditions and mounting concerns over the country’s fiscal position. This comes on the back of lingering external headwinds, including ongoing supply chain pressures and surging inflation.

Kenya: In a move aimed at breaking down the current monopoly, the government licensed a second bulk grain handler. Heartland Terminals plans to build and operate a KES 5bn grain-handling terminal at Mombasa port. The new facility is said to result in an overall reduction in consumer prices due to competition, lower tariffs and capacity to handle bigger vessels discharging grains. Soaring food and oil prices are the main drivers of inflation in Kenya. Therefore any reprieve on this front will be well received by investors.

Africa: Managing Director of the International Monetary Fund Kristalina Georgieva has raised fresh concerns that up to 20 countries in sub-Saharan Africa are close to debt distress, pushed first by the covid pandemic and the new spillover effects of the war in Ukraine. Georgieva warned that rising interest rates are squeezing the world’s poorest countries, pushing many countries closer to debt distress. Georgieva told reporters Wednesday that 60% of low-income countries were in or near “debt distress,” a threshold reached when their debt payments equal half the size of their national economies. The IMF forecasts that government debts in low-income countries will surpass 50% of GDP this year, up from less than 44% in the pre-pandemic year 2019. The World Bank meanwhile said in a separate statement that up to a dozen developing countries may be unable to meet debt payments over the next year. The World Bank said it is nothing like the emerging market debt crises of the 1980s and 1990s, but added that it would still be significant.

Nigeria: A long-standing point of contention for investors has been the adverse impact of Nigeria’s subsidies on its fiscal position. World Bank President David Malpass added to the criticism list over the negative impact of the country’s subsidies on Wednesday. The World Bank head said the subsidies are expensive because they go to everyone and they are often taken more by people with upper incomes than by people with lower incomes so they are not targeted. Malpass said that the World Bank encourages that when there needs to be a subsidy for either food or for fuel, that it be carefully targeted for those most in need. On the currency front, Malpass criticised the country’s multiple exchange rate regime, noting that it is complicated and not as effective as it would be if there were a single exchange rate. Malpass added that “the most useful thing for developing countries is to have a single exchange rate that is market-based, that is stable over long periods of time as that attracts investment and it also means that there’s a discipline within the country’s fiscal policy so that would help.”

Nigeria: On the political front, Nigeria's ruling party All Progressives Party (APC) has set its presidential primaries for May 30-31. President Muhammadu Buhari will step down after serving two four-year terms in 2023. Nigeria’s political parties are set to pick their presidential candidates by June 3 as they prepare for their official campaigns for the February 2023 presidential election. According to the country's electoral commission, official campaigning will begin in September. Current Vice President Yemi Osinbajo and former Lagos state governor Asiwaju Bola Tinubu are frontrunners in the race to be the next candidate.

While headwinds for the Zambian Kwacha remain notably, the currency has managed to pare back some of its recent losses this month. For context, the Zambian Kwacha has gained just shy of 3.7% against the USD since the start of the month to trade at 17.4250, according to Bloomberg data. The recovery in the Kwacha comes on the back of expectations for the central bank to raise rates further, optimism that a deal with the IMF will be secured over the medium term and elevated copper prices, which are underpinning foreign currency inflows into the country and tax revenues. 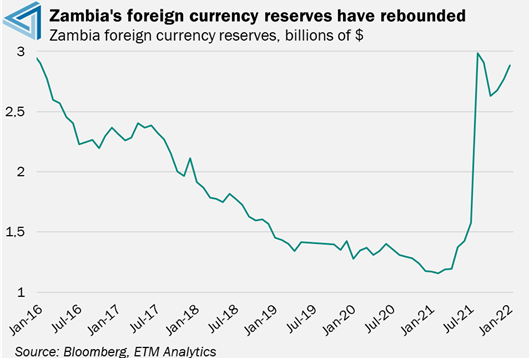 Although there are still a number of headwinds facing the Zambian Kwacha, it is worth noting that currency risks have fallen sharply relative to a year ago. This is reflected by the sharp drop in the ZMW’s currency risk score in ETM’s FX Risk Barometer, which compares a currency’s implied yield relative to historical volatility. Moreover, volatility in the currency has almost halved over the past year, with historical volatility in the ZMW currently sitting just north of 10%.

Looking ahead, while there is potential for further strengthening in the ZMW, further gains in the currency are likely to be capped in the near term as external headwinds counter domestic tailwinds. That said, we remain somewhat bullish on the ZMW over the next 6-9 months amid expectations that the Zambian government will secure a deal with the IMF in the second half of the year once it has sorted out its issues with some of its creditors, which include China. Bolstering this notion is a rebound in the country’s FX reserves, a recovery in investor confidence and expectations for international copper prices, the country’s main export, to remain elevated.

Fixed Income: Both the IMF and the World Bank sound alarms over debt concerns 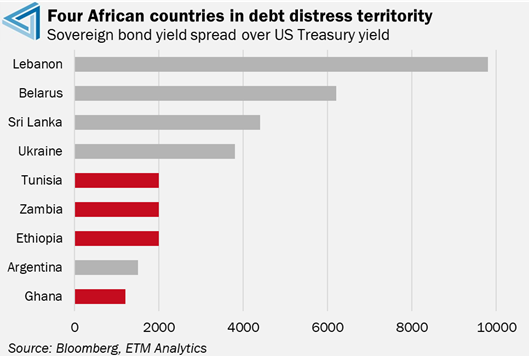 The World Bank and the International Monetary Funds have raised red flags over rising debt levels in emerging and frontier markets. The World Bank estimates that the low-income countries owe $35bn in payments in 2022. While the IMF and the G20 drew up a plan to help provide debt relief for low-income countries in need of financial aid, the program has thus far been fruitless.

In Africa, Ethiopia, Zambia and Chad joined the G20’s Debt Service Suspension Initiative, known as the Common Framework, in 2020 but are yet to benefit from the program. According to the IMF, the Common Framework has been hampered by a lack of coordination, transparency, and clarity. In the absence of fiscal reprieve, fiscal risks in Africa have risen sharply, with the likes of Zambia being the first African country to default on its debt in the covid era.

A quick look at fiscal risk premiums shows that four African countries, namely Ethiopia, Zambia, Tunisia and Ghana, find themselves in debt distress territory, a position where a country’s bond yields are trading at a premium of more than 1000bps over US Treasury yields. Note that there are a number of other African countries that are also on the brink of fiscal distress.

Looking ahead, given the marked deterioration in fiscal dynamics in Africa, we advise investors to maintain a cautious stance when investing in fiscally fragile African sovereign bonds as external headwinds intensify. While soaring inflation and tighter monetary policy dynamics are adding to fiscal pressures, some countries benefit from the surge in commodity prices, boosting foreign currency inflows and tax revenues. Angola is a standout in terms of improved fiscal dynamics and is looking ever so investable at the moment.

There’s a lot of cause for concern about social unrest on a widespread scale as a result of rising global food prices. Even before the pandemic, global food prices had been trending higher amid extremer weather and strong demand from China. 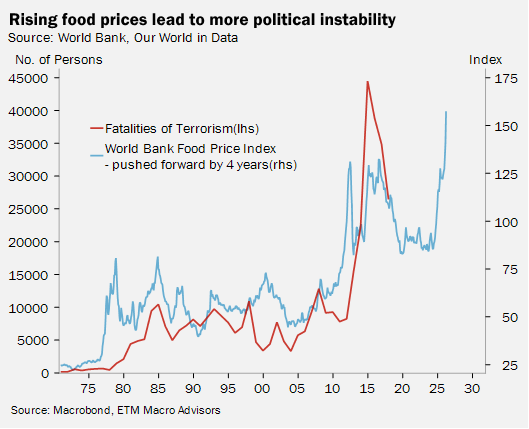 Fast forwards to today, global demand for food remains strong while supply-side issues have intensified. Higher fuel prices and shipping costs, soaring fertilizer prices, and other supply chain bottlenecks like a shortage of truck drivers and shipping containers on the back of extreme weather conditions are pushing food prices to record highs.

Food prices reached another all-time high in March as wheat prices surged, driven by conflict-related export disruptions from Ukraine and, to a lesser extent, Russia. The expected loss of exports from the Black Sea region exacerbated the already tight global availability of wheat. The other global staple, corn, has surged to a 10yr high this month amid adverse weather conditions in the US and Brazil.

Historically there has been a strong correlation between food prices and political instability/fatalities of terrorism. This is evident in the accompanying chart. Surging food prices have been at the heart of numerous uprisings in history, most notably the Arab spring in 2008, a series of anti-government protests, uprisings, and armed rebellions that spread across much of the Arab world.

A number of research papers have found that low-income countries are most susceptible to food price induced political instability. Food security risks in Africa have risen sharply in recent weeks since the outbreak of the war in Ukraine. This has amplified the risk of political instability and uprisings on the continent, a factor worth monitoring closely in the months ahead, given that food prices are expected to remain elevated throughout 2022.