Food protectionism and the ugly face of inflation in West Africa

Food inflation is ravaging the world, and we should all be worried. Countries are engaging in food protectionism to manage the impact of rising global food scarcity on their populations. According to our food security index, African countries are more vulnerable to food stress, with Nigeria being the most vulnerable. The stress is beginning to cause second-order effects such as stampedes during food relief programmes.

Confirmed cases of monkeypox double in Nigeria, but the chances of a lockdown are low. On a more positive note, Ghana signs a renewable energy agreement with African Development Bank, Starlink has gained approval to operate in Nigeria, and Nigerian Pension Fund Administrators can now co-invest with private equity funds.

Ghana has extended its ban on food exports, which was initially supposed to last for six months from September 2021 to March 2022, but will now last until September 2022. The country's stance on food protectionism aims to improve the local food supply and keep surging food inflation at bay.

The extended export ban on grains including rice, maize and soya beans has been necessitated by the ongoing global food war following the Russia-Ukraine war. Algeria, Indonesia, Uganda and India have also announced export bans to shore up domestic supplies and curb food inflation. The surge in Ghana's latest inflation data by 420bps to 23.6% in April (the highest since Jan-2004) has necessitated measures to keep commodity prices at bay, including a recent rate hike of 200bps to 19%. 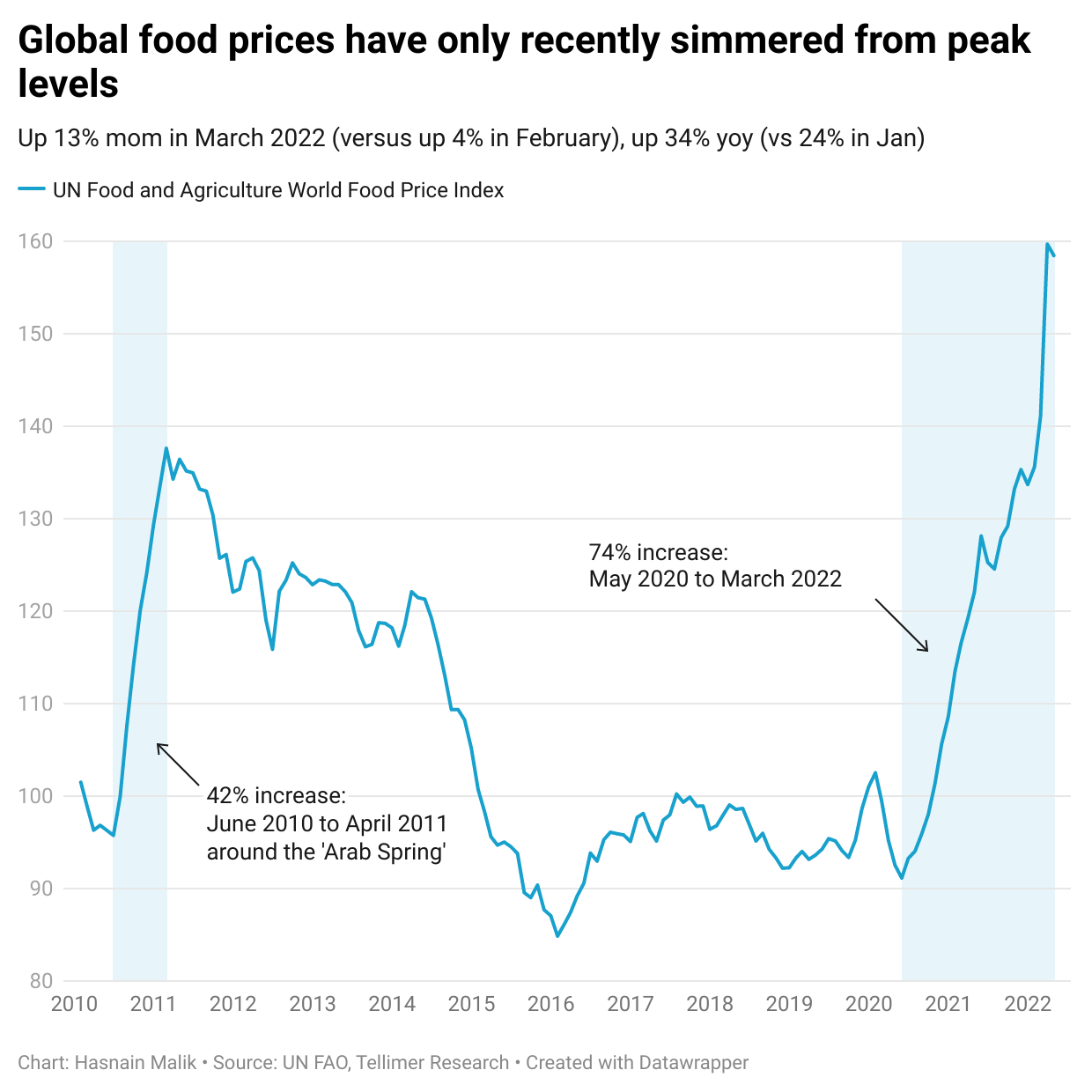 Ghana is not exactly a major exporter of the banned grains (and so may not leave major imprints on global supply), according to 2021 data from United Nations Conference on Trade and Development (UNCTDA) – maize, rice and soya beans each make up less than 0.5% of world exports. However, their top buyers – including Niger (81% of maize exports), the US (50% of rice exports) and India (76% of soya bean exports) – are more likely to feel the effect of the ban.

The ugly face of food inflation

In the past few months, inflation has accelerated globally due to the impact of Vladimir Putin's invasion of Ukraine on global fuel and commodity prices – including food. The effect has been particularly tough on Sub-Saharan African countries, which are typically net importers of food.

Nigeria's food inflation came in at 18.4% in April, and according to our food security index it is the most vulnerable EM country. In the past week, 31 people were killed in a stampede in Port Harcourt, Nigeria, as a church was trying to provide food and household items to people in the community. 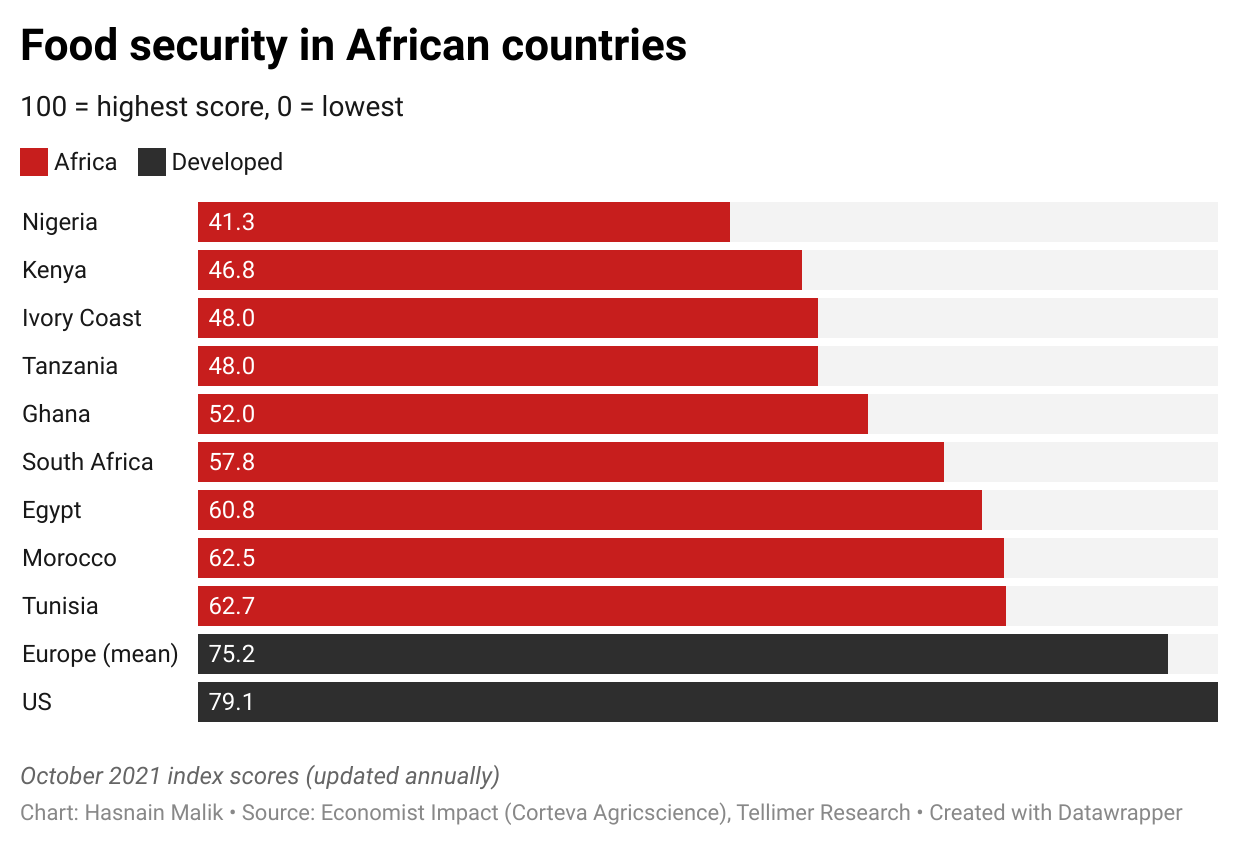 The outlook does not seem positive as countries intensify food protectionism. Growing food inflation and food scarcity could unleash protests across many countries and cause an increase in crime rates. 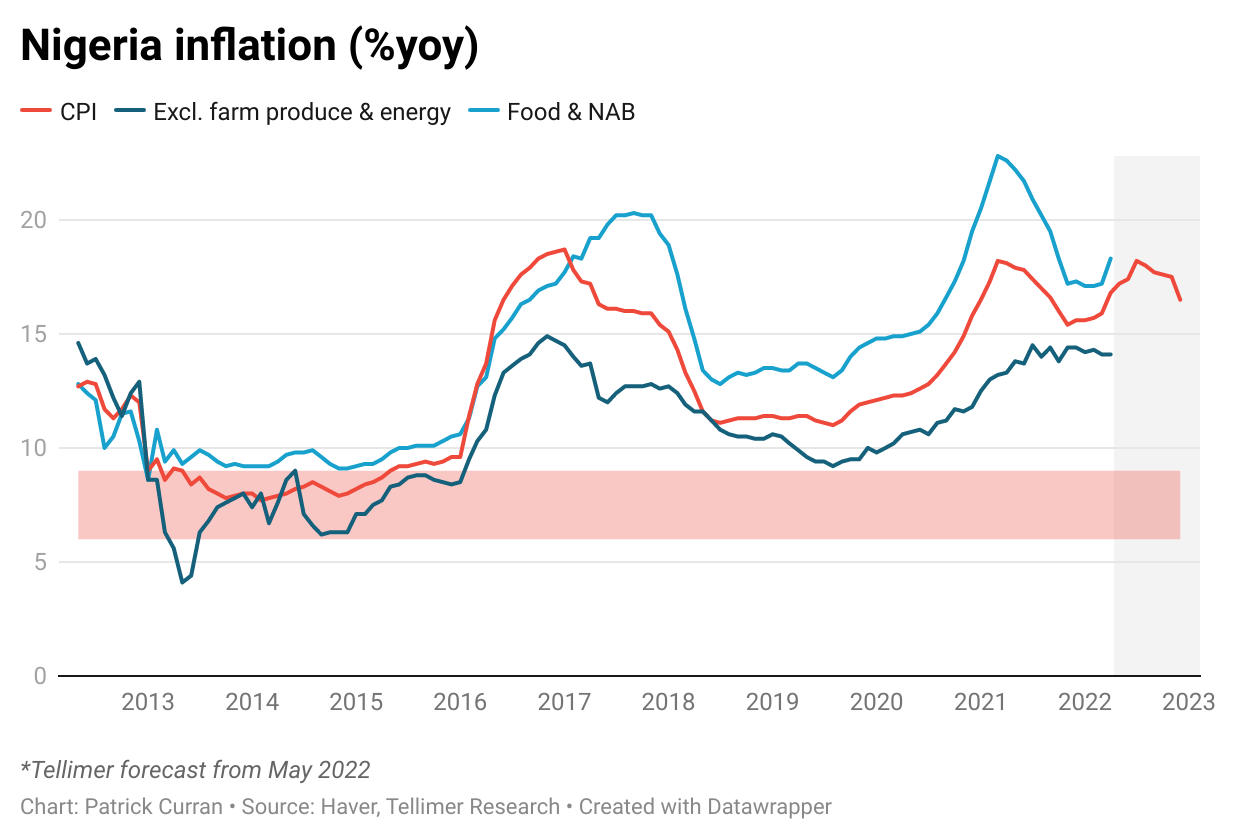 There has been a multi-country outbreak of monkeypox, a disease endemic to West and Central Africa. According to the World Health Organization (WHO), there are now 257 confirmed cases in 23 non-endemic countries. Nigeria, being no stranger to monkeypox, has recorded 66 suspected cases since January 2022; 21 have been confirmed, and one death has been recorded. The number of confirmed cases doubled between April and May, causing the Nigerian Centre for Disease Control (NCDC) to activate the National Multisectoral Emergency Operations Centre.

On the bright side, it is far less transmissible than Covid. Therefore, the likelihood of another set of lockdowns is low. Notwithstanding this, there is a need to carefully monitor the situation and spread. For investors seeking exposure to this issue, we highlighted three pharmaceutical stocks exposed to the outbreak.

Nigeria’s debt stock has ballooned significantly over the past few years. While the debt to GDP ratio does not look alarming, the debt service to government revenue ratio, currently at 89%, is a big concern. The IMF has warned that Nigeria could have a debt service to revenue ratio of 100% by 2026 if debt levels continue to rise. 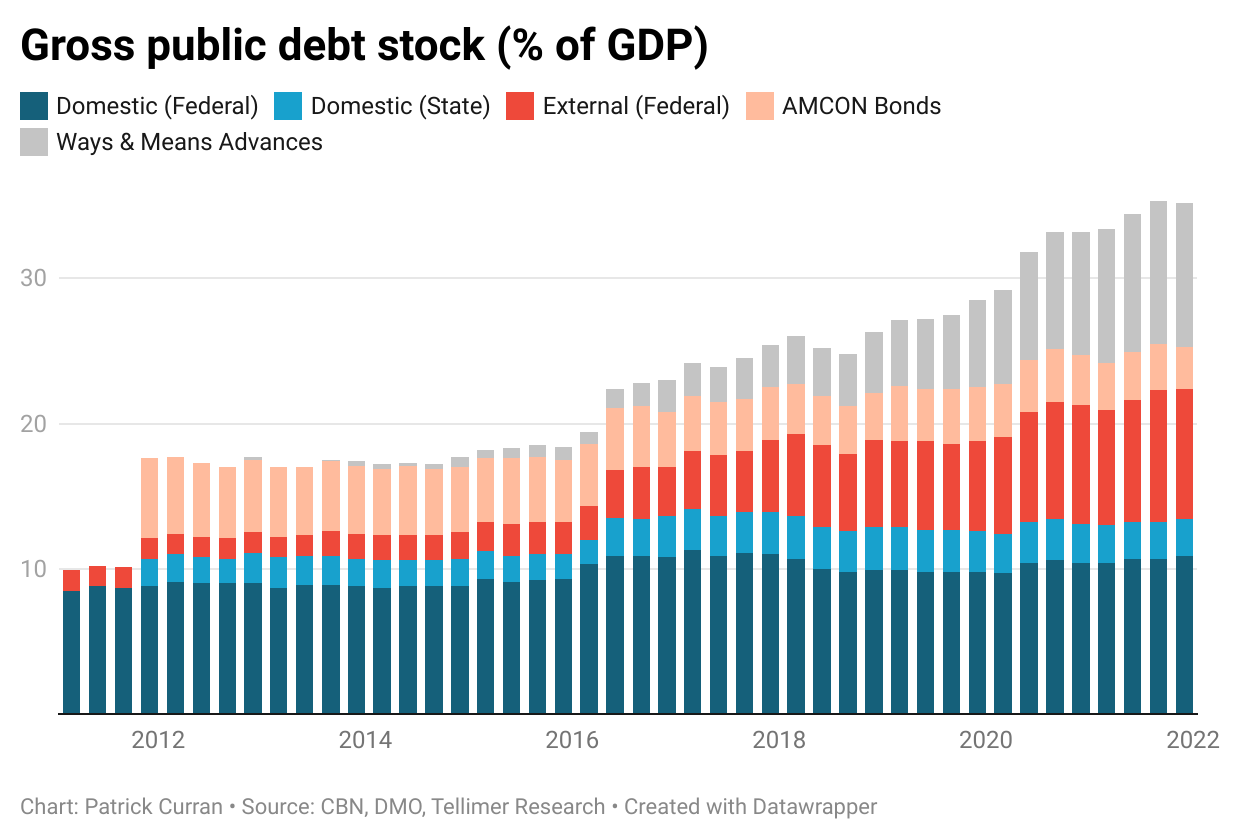 As we have previously highlighted, a failure to boost revenue will push Nigeria closer to debt distress and increasingly limit the space for non-discretionary spending on physical and human capital or the social safety net, which will result in a looming infrastructure gap and constrain growth in the years ahead.

The African Development Bank (AfDB) has signed a US$70mn renewable energy agreement under the Scaling-up Renewable Energy Programme (SREP). The programme will be implemented between 2022-25 in three components:

Overall, the energy agreement is favourable for Ghana, as the SREP programme would facilitate the closure of the 14% electricity access gap. 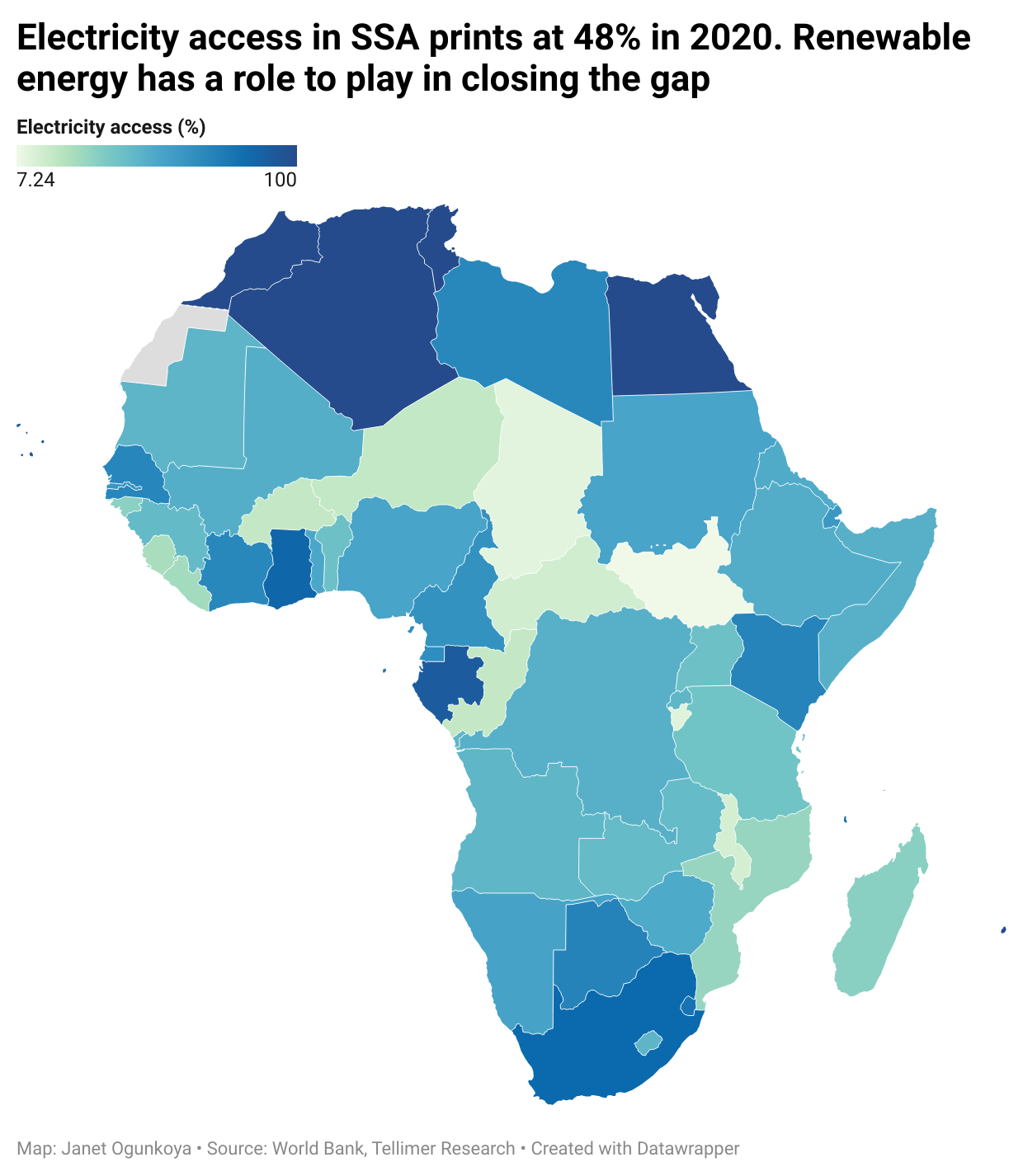 Elon Musk has a dream to bring internet to every corner of the world through Starlink, his satellite internet company. Last year, the billionaire announced that he was in talks with the Nigerian Communications Commission to secure an operating licence in Nigeria. Last week, the billionaire tweeted that licences have been secured in Nigeria and Mozambique.

There are reasons to be excited because satellite internet is vital for the next stage of internet connectivity in the world. However, there are a few concerns – it is expensive for most Africans, and usage is the most pressing internet problem we have (not coverage). 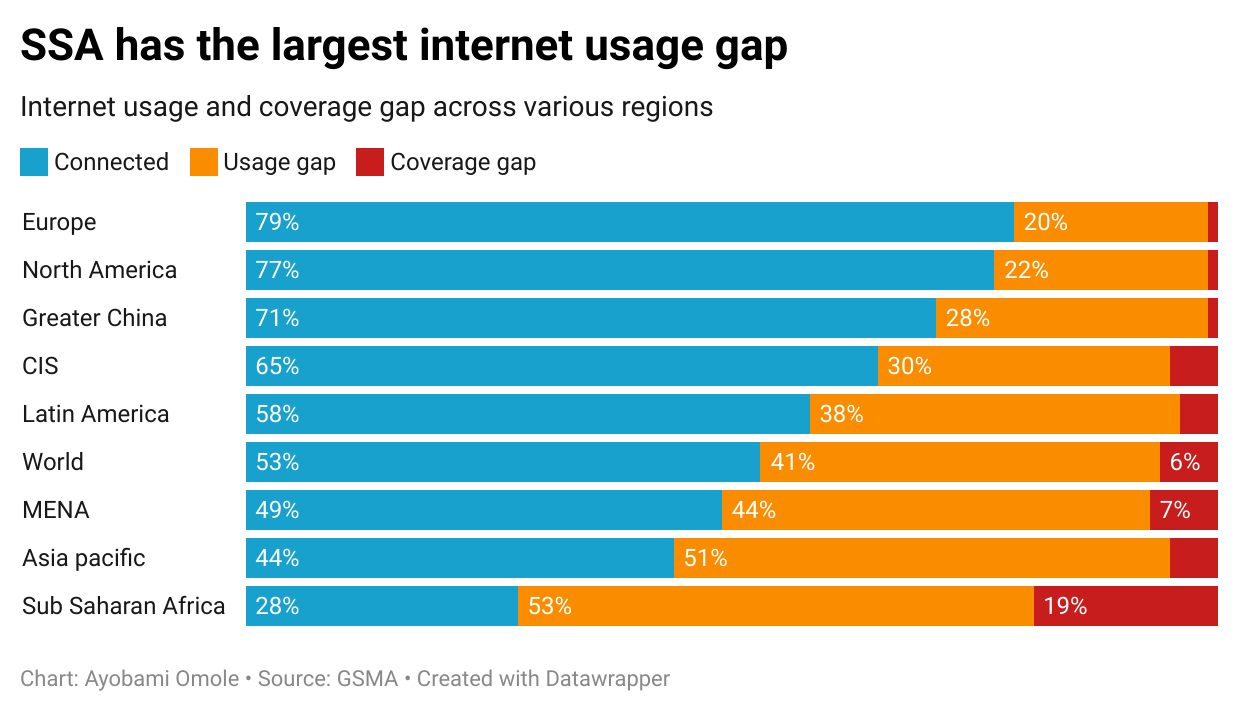 Nigeria's new pension framework encourages PE uptake, but there is a supply problem

Nigeria's pension regulator recently released an operational framework for Pension Fund Administrators (PFAs), which provides the standards and procedures for co-investment of pension funds alongside PE funds. The framework provides that PFAs can enter co-investment arrangements through Special Purpose Co-Investment Vehicles (SPCV) created by the PE fund – a provision the regulator believes will increase PFA participation in PE Funds.

A large proportion of PFA assets in Nigeria are allocated to domestic fixed income and equity securities, in part, due to strict regulatory requirements. Allocation to alternative assets such as PE funds is faced with restrictions due to the limited investment options. PFAs are then forced to crowd fixed-income markets.

Thus, despite the influx of tech startups and PE/VC activities (most of whom are not registered with Nigeria SEC), PFA's are forced to steer clear from these alternative assets. Apart from regulatory constraints, this might also not be the best time as Venture Capital valuations are set to tumble. 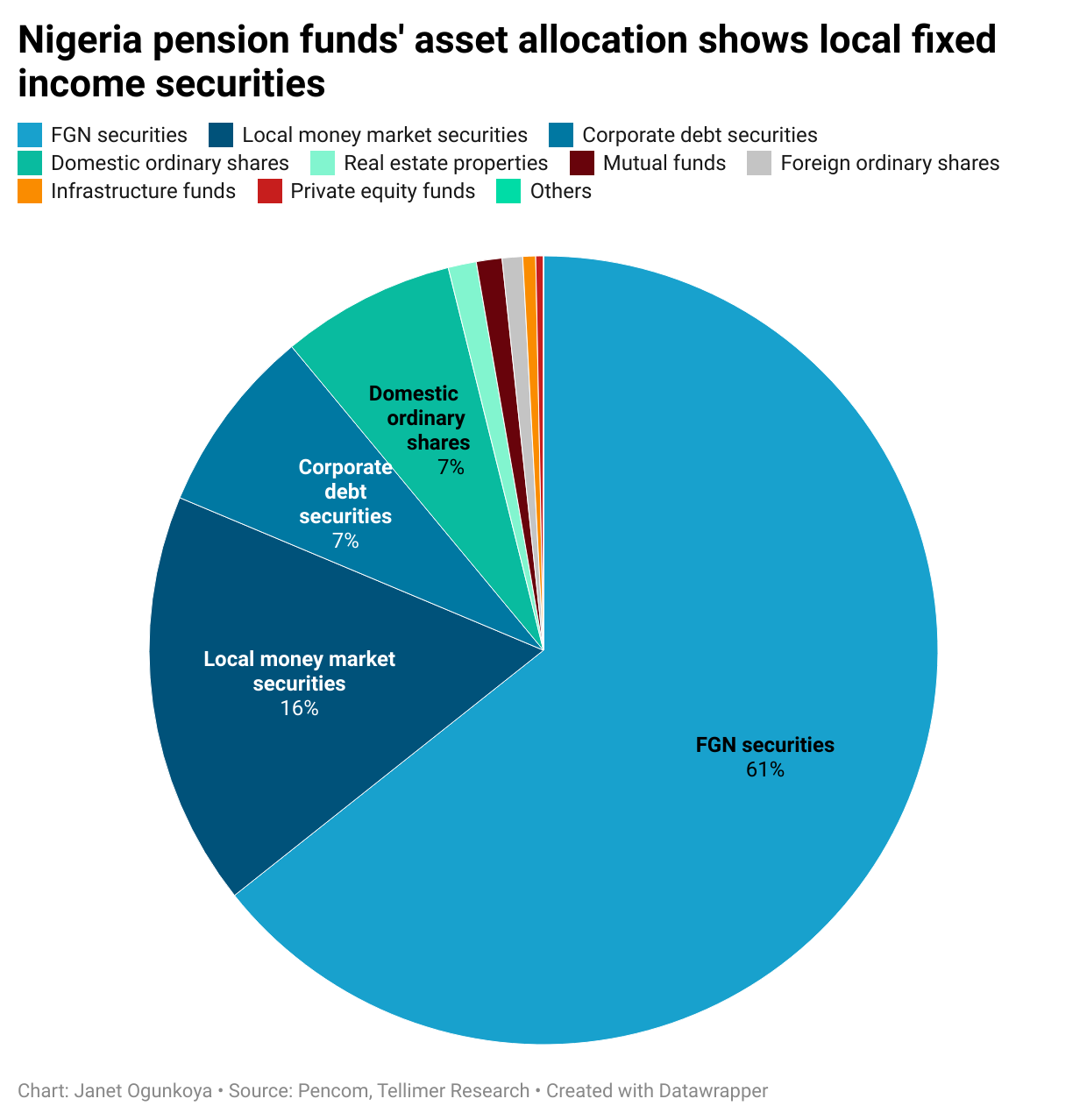 The annual summit of the Africa CEO Forum, in partnership with the International Finance Corporation (a member of the World Bank Group), will be held on 13-14 June 2022 in Abidjan, Côte d'Ivoire.

The Purchasing Managers' Index (PMI) for Ghana and Nigeria defied expectations with increases in the readings in April. However, while Nigeria continues to print above 50, signifying economic expansion, Ghana's PMI showed contraction with a reading below 50 for the third consecutive month.

The Nigerian market closed on a positive note in the past week. Gaining 2.0%, bringing the ytd return to 25.5%. Over the month of May, the market gained 6.8%, taking the market to a a 13-year high market capitalisation of NGN28.6tn. Some of the major drivers include palm oil stocks like PRESCO and OKOMU. The bullish run in the market, we explained, was driven by minimal global contagion, low FI yields and foreigners exiting via dual-listed stocks.

Despite this stellar performance, we have a negative outlook on the Nigerian equities market as an anticipated increase in domestic bond yields in the coming months will put a dampener on local participation in equities. 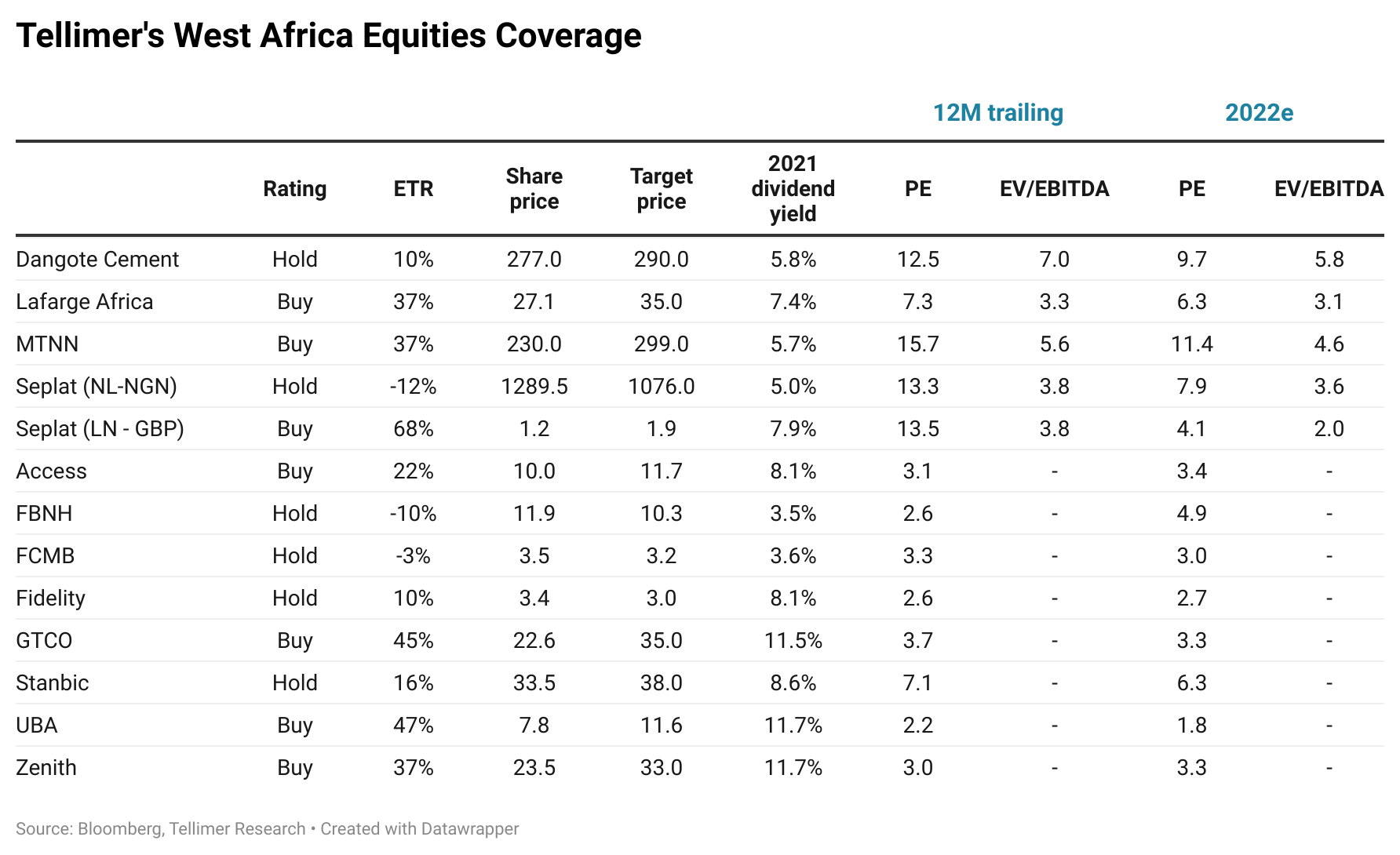 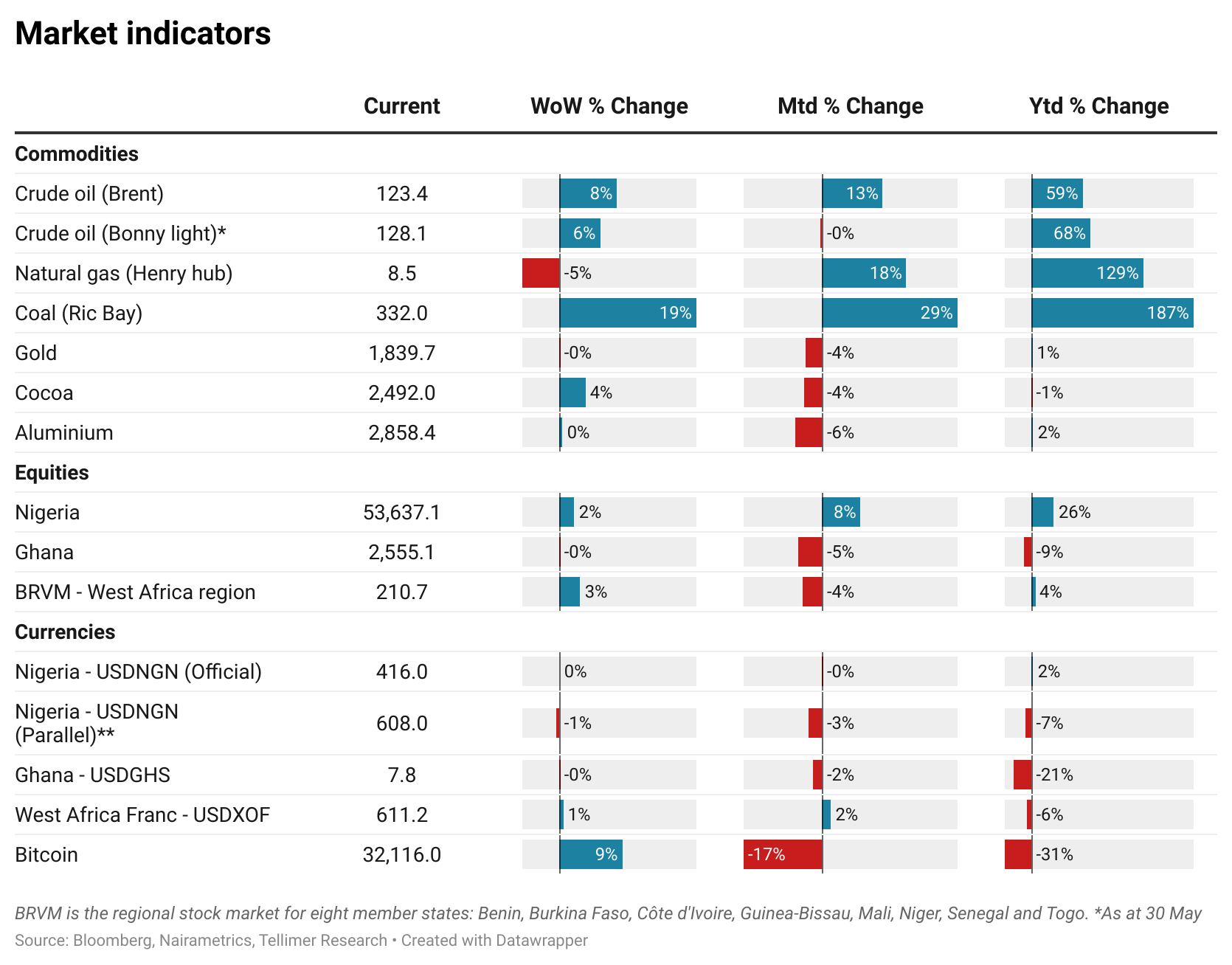 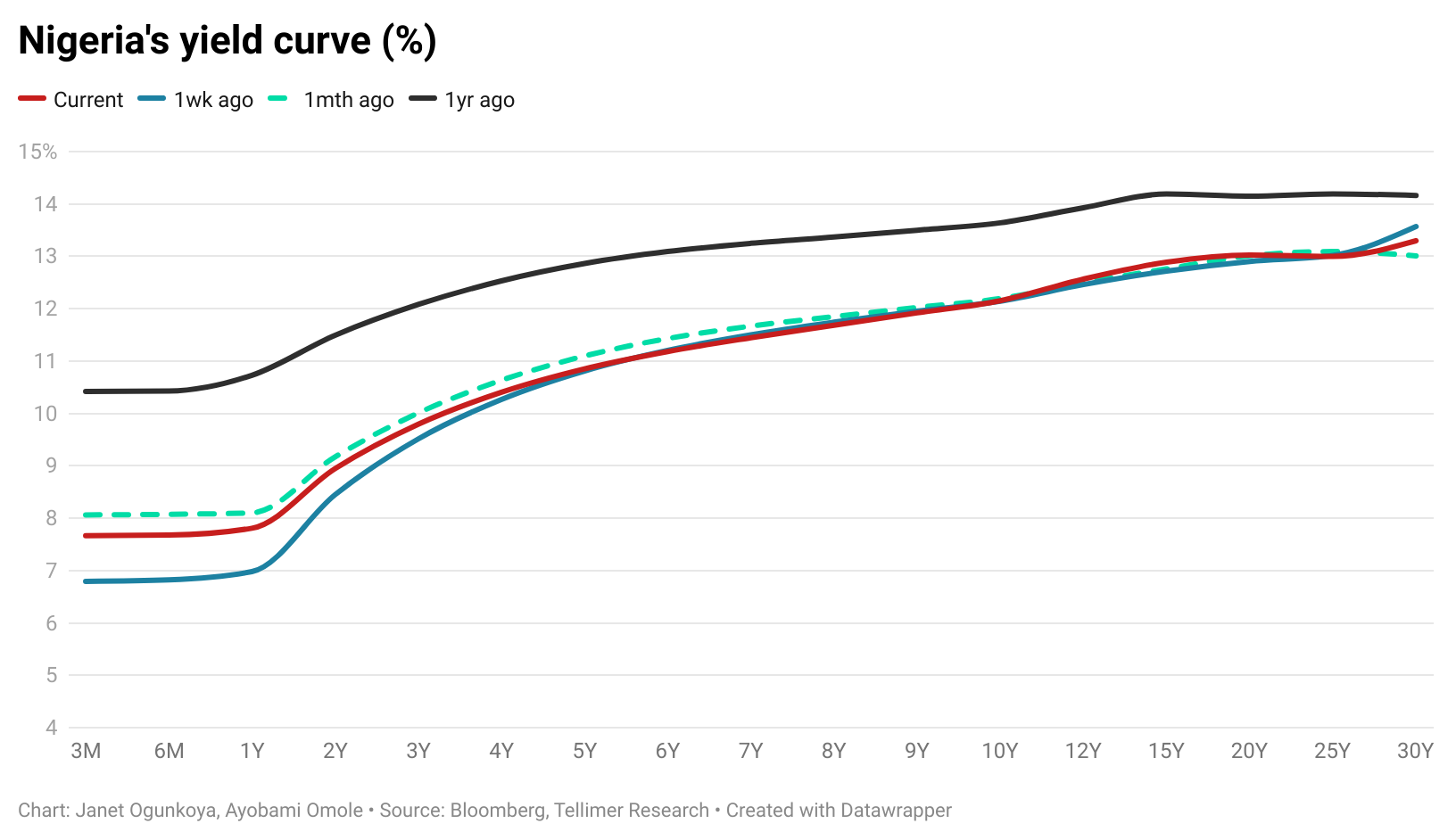 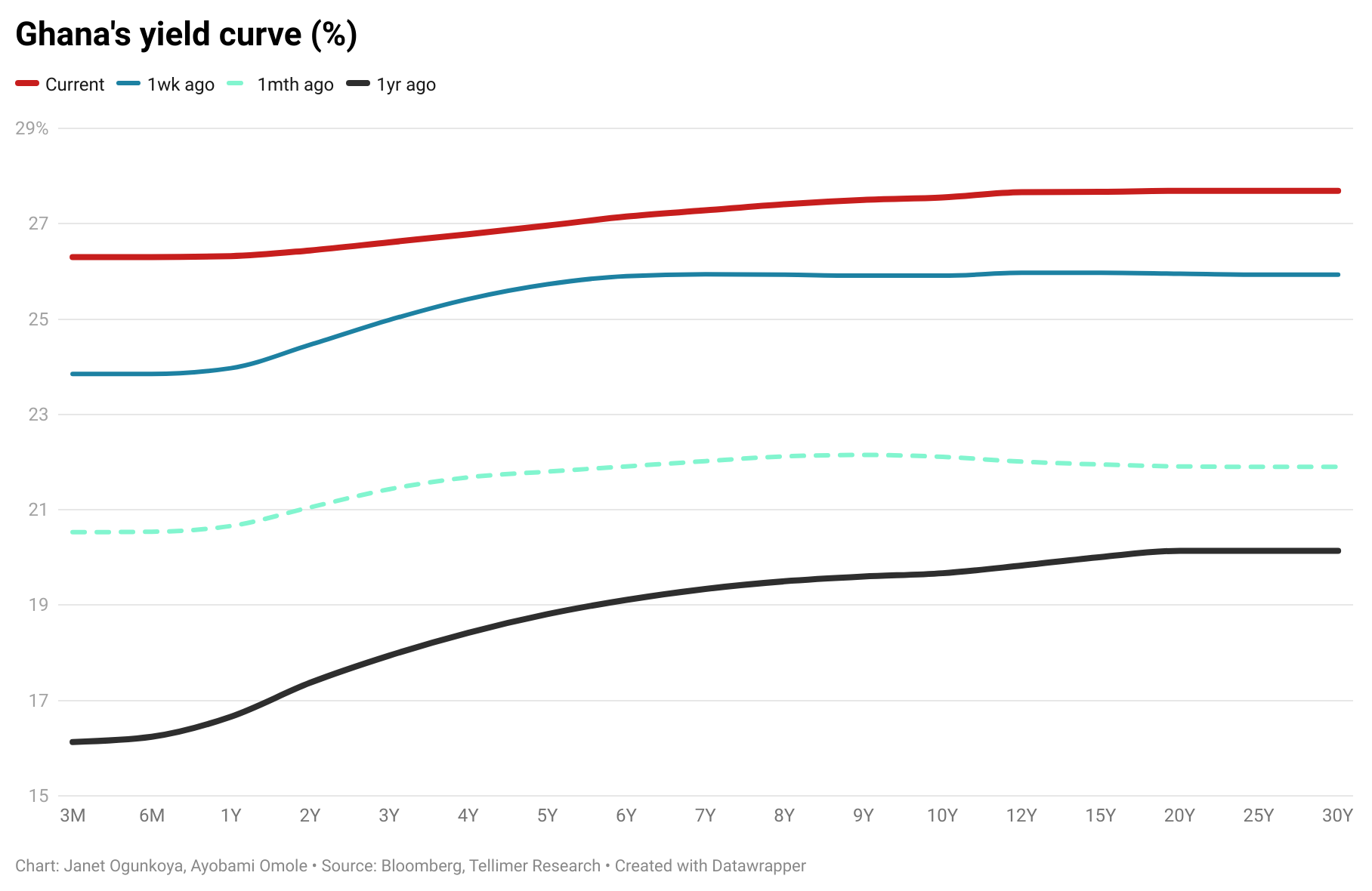