Although the USD recovered from its lows last week, the recovery looks tentative. With the Fed talking about easing the pace of tightening and pivoting, other central banks are not there yet, with the ECB indicating that it still has much more tightening to implement. It will prove more difficult for the USD to regain momentum unless bond yields in the US start to surge higher again, which looks doubtful, given just how much has been priced in. The USD itself is expensive, and it is becoming increasingly difficult to argue for a long USD position from current levels. Monetary policy will always be cyclical, and it would appear that the US Fed is ahead of the game. That works when rates are on the way up and back down again. If the US equally is the first to pause and start talking about cuts, we may have seen the best of the USD, especially if the Fed softens its stance and this becomes the new theme. The EUR-USD is trading just below parity at the start of the week, while the GBP slipped marginally below 1.1600. The JPY is also on the back foot, trading just below 148.00, but momentum across the board is subdued.

East Africa: In its outlook report released on Friday, the African Development Bank forecast East Africa's economic growth to be potentially slower than estimated previously as disruptions to global supply continue to weigh on production. The lender said the region's growth could slow to 4% compared to an April forecast of 4.7%. Seychelles and Rwanda are projected to record the fastest economic growth rates at 7.1% and 5.9%. Meanwhile,  South Sudan is seen posting the worst performance in the region, with growth projected to contract by 2.8%. Inflation in the region is estimated at 36.8% this year, compared with 36% projected in April, before it decreases to 27.8% in 2023 as global value and supply chains stabilize.

Ghana: President Nana Akufo-Addo has ruled out debt haircuts in negotiations for a support program from the International Monetary Fund. Akufo-Addo added that individual and institutional investors in Ghana’s debt instruments, including pensions funds, will not lose money due to the negotiations for IMF support. The president also said that Ghana will seek to restore financial discipline by reducing its total public debt to 55% of GDP by 2028 and pegging its external debt-servicing costs to no more than 18% of annual revenue by the same year. Moreover, Ghana plans to review its foreign-exchange management for imports such as rice, poultry, vegetable oil, and toothpicks in May. A follow-up IMF mission is expected in Ghana within weeks to continue government talks for a program. Should the lender deem Ghana’s debt unsustainable, the authorities will have to take remedial action, including restructuring its liabilities, to qualify for assistance.

Egypt: The Central Bank of Egypt plans to gradually phase out the requirement for businesses to import goods only through the use of letters of credit by the end of the year. Having secured a staff-level agreement with the IMF for a total of $4bn in loans that could potentially unlock a further $5bn in financing, the CBE took the first step of raising the limit on shipments of imported goods exempted from its February decision from $5,000 to $500,000. The move is a relief for domestic businesses, especially manufacturers, who have seen their stock of inventories depleted due to the scarcity of foreign exchange in the banking system to open letters of credit, hindering their manufacturing operations.

Kenya: The Kenyan government is set to take over the payment of a $525mn US Export-Import Bank loan it guaranteed for Kenya Airways Plc after the national airline failed to meet its repayment obligations due to financial difficulties exacerbated by the coronavirus pandemic. According to Treasury, the airline stopped remittances on the guaranteed and the non-guaranteed portions of the loan. Treasury added that "following the default," the cabinet gave approvals to pay the loan arrears "and the loan balance to be novated to government." Kenya, in 2017, had guaranteed part of the $841.6mn 10-year facility the airline took.

Nigeria: Nigeria's cocoa exports fell by 16% y/y in September to 11,904 tons and compared with 10,823 tons of cocoa beans shipped out in August. The Cocoa Association of Nigeria attributed to the decline in the y/y figure due to too much rainfall and excessive flooding in the cocoa-growing states. As cocoa exports are another significant source of foreign currency earnings in Nigeria, the decline is set to reduce foreign exchange inflows further and add to ongoing dollar shortages. Note that according to the International Cocoa Organisation. Nigeria is the fifth biggest producer of cocoa beans.

Namibia: To enable new and existing investors to conduct their business in a conducive investment environment, Namibia has launched a one-stop center for investors aimed at streamlining procedures. According to the Minister of Industrialisation and Trade, the center exists to facilitate efficient services and boost the confidence of both local and foreign investors in all productive sectors of the economy.

Uganda: Uganda is seeking a loan of $455mn from Standard Chartered Bank of Uganda, and the finance ministry has sent a formal request to the parliamentary committee on the national economy. The loan is set to fund infrastructure projects in the year through June 2023. The Finance Minister is set to engage a committee on the 31st of October over the request, and the plenary is expected to debate it the following day due to the urgency of the application. Uganda National Roads Authority has urgent funding demands for contracted road projects underway.

Forex: Nigerian Naira plunges to its weakest level on record

The final trading session of the week saw the Nigeria naira weaken to a record low in the official market against the USD after the Central Bank of Nigeria on Wednesday announced plans to replace higher denomination notes of its local currency. Specifically, the CBN plans to replace 200-,500- and 1,000 naira notes by January 31 and sees the move as helping curb currency hoarding and slowing inflation. The weakening of the naira was not only in the official market, with the currency in the parallel market plunging to a fresh low of around 780 per USD. 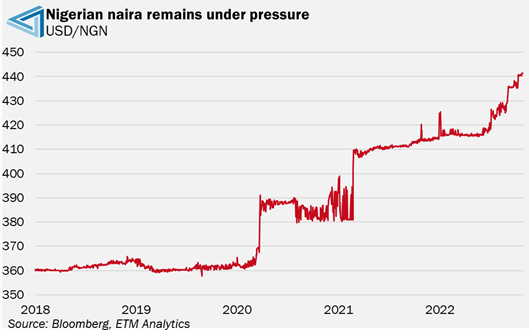 The International Monetary Fund has urged Nigeria to apply caution in its plans and avoid missteps that could undermine confidence in the financial system. The lender also said that it had reached out to the CBN to obtain more information and stands to provide any assistance as required.

The announcement by the CBN, in addition to ongoing dollar shortages, suggests that the naira in both the official and parallel markets may remain under pressure in the near term. Nigeria’s move to replace high-value currency notes from December may exacerbate dollar demand in the country, which rations foreign exchange and keep the naira on the back foot.

The stage is set for another volatile week of trade for bond markets. There will be a number of economic releases for markets to digest. That said, the week's most important event is the FOMC rate announcement on Wednesday evening. The forward guidance from the policy statement will set the tone for rates markets going forward. Investors will be watching closely for signs of caution and gradualism.

Traders will also be looking for signs of a downshift in the pace of rate hikes and whether we are likely to see a lower terminal rate than is currently being priced in. While a 75bps rate hike is widely expected on Wednesday, the size of the December move is less uncertain and will likely depend on how the central bank sees developments in the commodity market and economic conditions playing out. 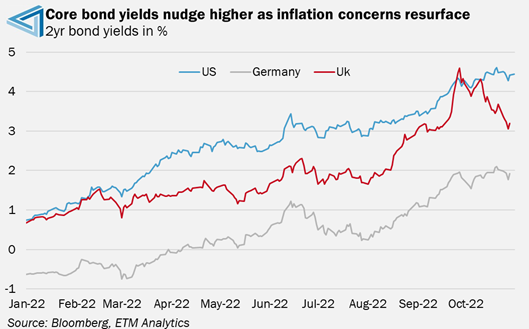 The base case is for a 50bps hike in December, but there are risks on both sides. Should the Fed see a cooling in the labour market and good-price deflation, we could see policymakers tilt in favour of a smaller 25bps hike. However, should fuel prices rebound as supply pressures relating to Russia intensify, the odds would be stacked in favour of another outsized 75bps hike.

Rates markets are a sea of red this morning, extending the losses seen on Friday’s session following the hotter-than-expected CPI data out of the Euro area. With inflation showing few signs of slowing, hawkish bets have resurfaced, which will likely keep bonds on the back foot ahead of the FOMC decision on Wednesday.

Macroeconomic: Lower wheat prices to provide some relief to inflation

Wheat is set for the biggest monthly drop since June as demand concerns start to intensify. Prices are down almost 10% in October, despite drought conditions impacting harvests in the US and Europe. The latest data shows that US weekly export sales are almost three times higher than the prior period and nearly double the level a year earlier. Elsewhere, Russian ports are loading wheat for countries including Bangladesh, Iran, Kenya, Yemen, Egypt and Turkey after the country harvested a bumper crop estimated at 100 million tons. 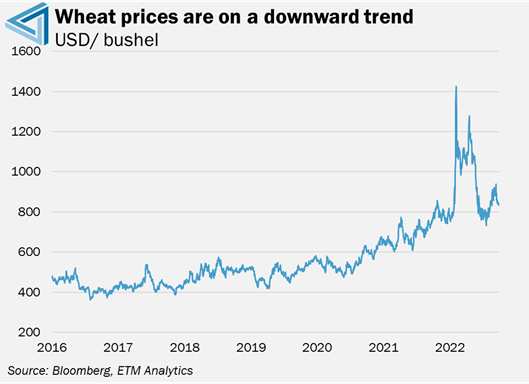 We have already seen a substantial pullback in international food prices in the last couple of months, resulting in price pressures starting to ease. While global food prices are on the decline, food production in Africa has dwindled this year due to extreme weather conditions across the continent. This has made Africa more reliant on food imports.

Looking ahead, while global food prices have moderated, wheat prices are still highly volatile amid uncertainty surrounding exports from Ukraine as the war continues to impact supply chains in Ukraine. The outlook for supply from Ukraine will depend on whether the UN is able to extend its grain deal, which secures a safe corridor to export grains from Ukraine.