FOMC guidance will be instrumental in the outlook for African bonds

There is not much change in the USD ahead of the main event of the week, where the Fed will decide on interest rates and offer guidance on the outlook for future monetary policy. It is unlikely that any FX markets will adopt any directional momentum with such an important event yet to unfold. That being said, the EUR remains on the defensive as oil prices nudge back up, and the war in Ukraine shows no signs of abating. Not even talk of unwinding the ECB’s balance sheet was enough to support the EUR, with the US JOLTS data surprising to the topside and showing that the labour market has yet to show the full effects of an economic slowdown. Again, it shows just how overheated the Fed had allowed the US economy to become and why it had to act as aggressively as it did. The Fed will hike by a further 75bp today and will signal more to come, but probably at a slower pace. The risk for the US economy is that the Fed swings too far in the other direction and tightens beyond what was called for. It is placing all its emphasis on a lagging indicator, such as the labour market, which may still take a while to turn, even though other indicators have already turned. The prices component of the ISM data, which retreated, was not enough to weigh on the USD as investors looked for more proof. So it’s over to the Fed this afternoon.

In the commodities market, oil prices have rebounded strongly from the intraday lows posted yesterday as US API data showed a notable decline in nationwide inventories yesterday. Brent has climbed to $95.75 per barrel at the time of writing after yesterday’s industry-funded report showed a reduction of more than 6.5mn barrels of crude, adding to signs of a generally tight market. There is also speculation doing the rounds that China is looking to scrap its COVID-zero policies, although officials have yet to confirm this. A slightly softer US dollar this morning has provided some additional support ahead of today’s FOMC meeting.

Botswana: Data from the Bank of Botswana showed that rough diamond sales by Debswana Diamond Company jumped 37.5% in the first nine months of the year. Specifically, Debswana’s January-September sales rose to $3.578bn from $2.602bn a year earlier. In local currency terms, Debswana’s rough diamond sales rose 52.5% to BWP 43.237bn, reflecting a stronger dollar in the period. Debswana accounts for almost all diamonds produced in Botswana, and the jump in sales is a significant boost for a country that generates around 30% of its revenue and 70% of its foreign exchange earnings from diamonds.

Egypt: Egypt is aiming to increase its oil and gas export revenues. This will include increasing liquefied natural gas (LNG) exports to 8mn tons this year, compared with 6.1mn tons in 2021. According to the Petroleum Minister, Egypt has the capacity to export up to 12mn tons of LNG annually, and the revenues from the export of gas, petrochemicals, and petroleum products are expected to reach $19bn this year. At a time when European countries are seeking to lessen their dependency on Russian gas, increased LNG exports could provide Egypt with a significant source of foreign exchange.

Ethiopia: In a move that may tighten liquidity, the Ethiopian government has instructed banks to invest 20% of their loan book in government debt. According to reports citing a directive sent to all lenders, the plan to reinstate the rule forcing the banks to buy state debt is to enhance the “participation of banks in supporting balanced growth of the Ethiopian economy.” The bonds are expected to pay an interest rate of 9% annually, 5.3ppts lower than the average lending rate.

Zimbabwe: Zimbabwe’s Reserve Bank Governor has said that the central bank will not be deterred by the lacklustre interest shown in Nigeria around the e-naira as Zimbabwe plans for its own central bank digital currency. The slow uptake of the eNaira is unlikely to sway Zimbabwe’s decisions making, and according to the Deputy Governor, it will instead help create and adopt measures to try and mitigate the factors that are causing hesitancy in the Nigerian market. Note that less than 0.5% of Nigerians transact in the nation’s digital money. That has prompted the central bank to seek new ways to boost interest, including offering discounts to drivers and passengers of three-wheeler taxis to use the eNaira.

Chad: The head of the International Monetary Fund’s Africa Department has said that the lender cannot disburse more funding to Chad under an agreed $570.8mn bailout unless reluctant creditors agree to revamp part of the country’s debt. Chad relies on oil for 80% of exports, and nearly 40% of government revenue has benefited from the surge in oil prices, so much so that the country’s official creditors committee concluded last month that debt relief for the nation was no longer warranted. The IMF official was quoted as saying, “we had hoped to make more disbursements but are unable to do so. It is true that with higher oil prices, Chad stands to benefit in the coming months, but there’s no guarantee that oil prices will stay high. And so, a contingent debt treatment” plan is needed that would provide some insurance if prices were to fall.”

Kenya: In a bid to lessen the negative impact of the worst drought in decades across the country, the Kenyan government will collaborate with development partners and the private sector to raise an additional KES 10bn, according to President Ruto. The prolonged drought poses a humanitarian crisis not only in Kenya but in countries such as Somalia and Ethiopia and has driven up food price inflation in recent months. 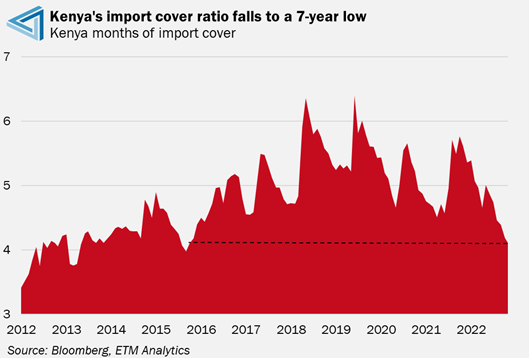 Aside from debt repayments to bilateral and commercial lenders, foreign exchange reserves in Kenya have fallen in part due to continued central bank intervention to try to slow the rate of depreciation of the shilling. On a year-to-date basis, foreign exchange reserves have fallen by around 17%. During this period, the shilling has weakened by over 7.0% against the USD. The weakness has primarily been driven by increased dollar demand from importers, especially in the oil and energy sectors, against a backdrop of limited supply of hard currency.

The supply of foreign exchange has been partly hampered by falling export earnings. Data from the central bank showed that the value of horticulture exports Kenya shipped between January and August 2022 declined 9.9% to KES 84.1bn ($717mn) as compared to a similar period in 2021 on low volumes. With dollar shortages persisting in Kenya and the currency continuing to slide, further downside risks exist for foreign exchange reserves in the near term.

Fixed Income: The path forward for African bonds is dependent on the Fed’s forward guidance

The big day has arrived for financial markets. All eyes are on the Federal Reserve as traders wait to see if the central bank will pivot from its ultra-hawkish policy stance as growth risks in the world’s largest economy emerge. The FOMC is widely expected to deliver a fourth consecutive 75bps rate hike this evening, lifting the target range to 3.75-4.00%. More important than the actual rate decision will be the forward guidance provided by Fed Chair Jerome Powell. 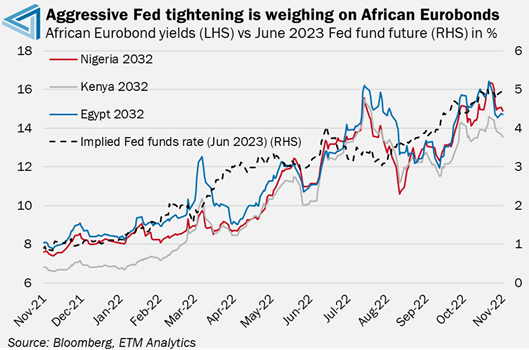 Chair Powell is expected to prepare markets for a slowdown in the pace of rate hikes at the December meeting, where a 50bps hike is now expected. Investors will also be watching closely for implications for the terminal rate. With core inflation in the US still running hot, it is expected that Powell will be cautious about signalling that a pause or rate cut is imminent or that a downshift in the pace of rate hikes could result in a lower terminal rate.

The outlook for fixed-income markets will depend on the forward guidance provided tonight. As is evident in the accompanying, there is a strong relationship between the implied Fed funds rate and African bond yields. Specifically, our analysis shows that the correlation between the June 2022 Fed Fund Future and key African Eurobond yields sits at 0.90, which is regarded to be a strong statistical relationship. Therefore, a shift in the direction of the implied US Fed fund rates will be pivotal for the path of African Eurobonds in the months ahead.

Nigeria’s private sector remained in expansionary territory in October, with the economy-wide PMI coming in at 53.6 compared to 53.7 in September. The key driver that has kept the headline reading buoyed in positive territory is a sharp rise in new orders following reports of favourable and improving market conditions. On the price front, S&P reported that price pressures showed signs of easing, albeit that they remain robust by historical standards. 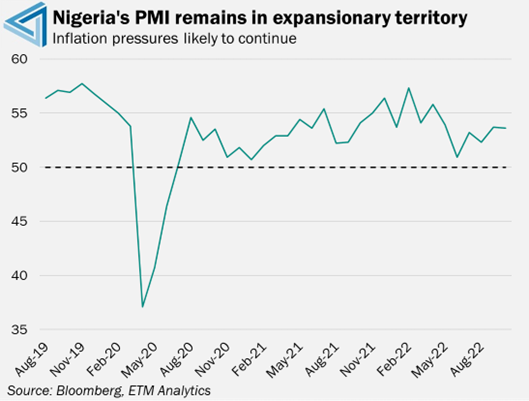 While firms have maintained an optimistic view towards output in the next 12 months, the degree of positivity was the second lowest in the series' history, with the figure recorded in September 2020 being the only weaker figure. This suggests that economic conditions over the next year are likely to be challenging as tightener lending conditions, still robust inflation and sustained currency weakness weigh on activity.

Risks to the inflation outlook remain skewed to the upside, with the devastating floods damaging a significant portion of Nigeria’s harvest, resulting in Nigeria becoming more dependent on food imports. As such, headline inflation in Nigeria is forecast to remain buoyed in double-digit territory next year. This comes on the back of the presidential election in February 2023, which has the potential to weigh on economic activity