28 May 2019
Published by
Tellimer Research

We pick out the highlights from equity markets this month.

A resumption of concerns around US-China friction and the knock-on impact on global growth (oil and copper prices fell c5%), US$ strength (trade-weighted US$ up 1.1%), CNY weakness (down 2.7%), EM equity fund outflows (the most since the Argentina and Turkey FX devaluations in 2018) drove a sharp drop in MSCI EM (down 8.1%). Thus far, FM (up 1.3%) has outperformed, but we would be very wary of expecting this to persist.

Pakistan (down 8%) was largely driven by another round of FX rate devaluation (7%), policy rate hike (150bps to 12.25%) and a signal of fiscal austerity in the upcoming June budget; all likely pre-conditions of the IMF staff-level agreement for a US$6 loan, welcomed by foreign investors as necessary steps to put the economy on a sustainable footing (evidenced by continued tightening of spreads on US$ sovereign bonds and net inflows to equities), but baulked at by local investors (who fear the upfront hit to growth and inflation).

Sri Lanka (down 7%) continued to fall in the aftermath of the 21 April terror attacks, with challenges to and divisions within the ruling coalition (eg a no-confidence motion and a request for the prime minister’s resignation from a member of his own party) growing more frequent, a spike in sectarian violence, cuts to GDP growth estimates (to reflect a lower contribution from tourism) and further delays to the main real estate development, Cinnamon Life, of bellwether JKH.

Indonesia (down 7%) was impacted by the broad sell-off in EM (more than ASEAN peers) and politics (following the election). Foreigners drive c40% of daily traded value in Indonesia, which is higher than Vietnam (15%), Malaysia (25%) and Thailand (35%), all of which weathered the EM sell off better. But this level of foreign participation is less than the Philippines (55%), which also fared better. The re-election of incumbent President Jokowi was, as in 2014, disputed by challenger Prabowo and violent protest was, albeit briefly, on a greater scale than in 2014. Equities are now near their cheapest for a decade.

Thailand (down 2%) fared better than others in EM, likely because of low FX rate risks (current account is in a large surplus of over 7% of GDP) and some relief that we are nearing the end of the election cycle, following the release of the official results. The military-aligned Phalang Precharath party is likely to form a fragmented coalition with a small legislative majority.

A 4% drop in the oil price (resulting from US-China-induced global growth concerns and high US oil inventories) and an escalation of US-Iran tensions provided an unhelpful backdrop for GCC oil-exporter equities. The weakness was broad-based: Qatar (down 11%), Saudi (down 10%) and Abu Dhabi (down 9%), with Kuwait (up 2%) the exception.

Kuwait was helped by continued foreign fund inflows related to an expectation of an upgrade from the FM to EM index in the annual country classification review by MSCI on 25 June: potentially from a 25.4% weight in FM to a 0.5% weight in EM, with nine stocks (with 6M ADV of cUS$75m). Kuwait trailing PB is currently at c30% premium to the five-year median.

Saudi’s inclusion in the MSCI EM index, with a 2.9% weight and 31 stocks, takes place in two tranches: 29 May and at end-August, with passive inflows of cUS$6bn on each occasion. Saudi Q1 19 aggregate public corporate earnings declined 8.5% yoy, but with better-than-expected results in a number of domestically focused sectors. Overall, declines and misses versus expectations in petchem (weaker prices and spreads), healthcare (expat exodus and margin pressure) and travel (higher opex) offset increases and beats versus expectations in banks (net interest margin expansion), telecom (revenue growth), cement (pricing) and Savola (restructuring). Saudi trailing PB is currently at a c10% premium to the five-year median.

Abu Dhabi’s largest stock, bank FAB (43% of the ADSM index), declined 10% immediately after its weight in MSCI EM was not increased in the 13 May semi-annual index review (which considers weights of individual stock constituents as opposed to entire country classification). Consensus expectations were for a significantly higher weight following the increase in the foreign ownership limit to 40% (from 25%) in April 2019.

Argentina (up 15%) outperformed all LatAm peers; Brazil (down 3%), Mexico (5%), Peru (down 8%), Chile and Colombia (both down 10%). This was driven by two factors: 1) increased intervention in the FX market (in the third FX policy change since February) and 2) passive fund inflows related to the accession of Argentina from the MSCI FM index (with 13.9% weight) to the EM index (with 0.26% weight and eight stocks). The market reaction to the announcement of an election pairing involving Alberto Fernandez for president and Cristina Fernandez de Kirchner (CFK) for vice president was positive, with a mixture of relief that CFK has allied with someone more moderate (which reduces probability of a reversion to Kirchnerist economic policy) and hope that this move confirms the split of the Peronist vote bank (not all moderates will join this pair) which, at least to date, trumps the concern that any involvement of CFK in the election dims the prospects of incumbent President Macri (given the very low approval rating of his government and his lower polled score in a hypothetical scenario where he faces CFK in a direct contest).

Kenya (down 7%) weakness was spread across all of its larger stocks (SAFCOM, KNCB, EQBNK, EABL); the comfortable issuance of US$2b of sovereign eurobonds (4.5x oversubscribed), growth in remittances (up 13% yoy), and the drop in oil prices was overshadowed by continuing inaction on scrapping the lending rate cap law, the absence of any progress on re-establishing the IMF credit line, drought (tea export) concerns and increasingly wide divisions in the ruling coalition.

Nigeria (down 6%) weakness was also broad-based amid disappointment over the reappointment of central bank governor Godwin (signalling continued multiple FX rates and only gradual policy rate cuts), concern that the temporary closure of the Trans Forcados pipeline (over 10% of exports) may have been a result of sabotage (this was not the case and it was re-opened within a week after leaks were repaired), a potential limit on the (high yielding) government securities held by banks and a regulatory enquiry into the listing of MTN Nigeria. An exception was DANGCEM, which spiked, at one point, over 10% in two trading days in the absence of any material fundamental news.

Egypt (down 4%) was mixed. The FX rate appreciated (up 2.2%), almost uniquely across EM. Policy rates were unchanged (16.75%) in advance of the next round of subsidy cuts and foreign portfolio investors are clearly still committed to the carry trade. Some of the more idiosyncratic stocks performed well on the results, which beat expectations, eg telecom GTHE (up 6%), industrial conglomerates EKHO (flat) and CCAP (down 1%). However, there was anaemic core revenue performance from bellwether bank COMI (down 5%), margin pressure at dairy producer JUFO (down 10%) and tobacco play EAST (down 7%), and a combination of margin and debt servicing costs at steel manufacturer ESRS (down 22%).

Romania (flat) outperformed peers such as Hungary (down 6%), Poland (down 7%) and Ukraine (down 9%). A very weak showing by the ruling PSD in the EU elections, the passage of a referendum that helps safeguard anti-corruption efforts and the loss of an appeal against the PSD leader Liviu Dragnea’s prison sentence all reduce the probability of the PSD winning re-election in December 2020. The PSD has generally pursued market-unfriendly policies. 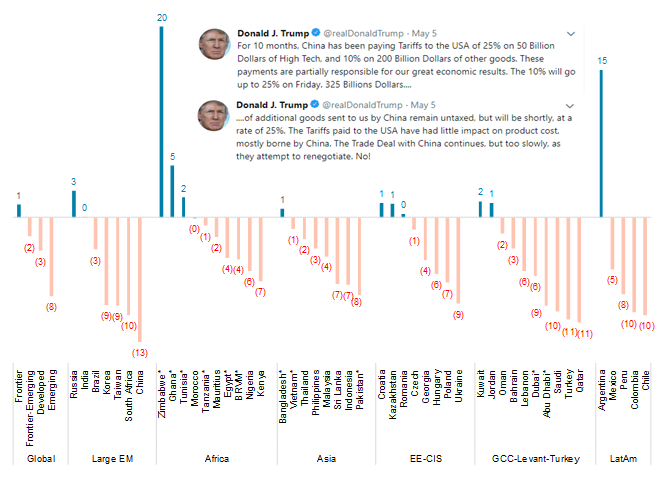