Notwithstanding the more aggressive-than-expected guidance from the Fed, the USD is on the back foot following a sharp bounce back in equity markets and an improvement in overall risk appetite. The VIX has retreated sharply, and the result has been to bolster most of the majors against the USD, with the EUR trading back above 1.1000/USDr and the GBP scaling the 1.3100 mark. Furthermore, the bias across most currency markets is more bullish against the USD, with even commodity currencies and emerging markets performing well. The underlying interpretation remains one of reduced risk aversion, responsible central banking to stave off growth sapping inflation, and the underlying strength of economies to withstand the monetary tightening.

Oil prices are nudging marginally higher this morning, but it seems as if the $100 per barrel for Brent is now the line in the sand to the topside. The benchmark contract is currently trading just below $100, with the tight global market still experiencing some volatility despite the fact that supply concerns have eased over the last week or so. We are now back near levels seen before Russia’s invasion of Ukraine, suggesting that the risk premium has been almost completely wiped out.

Africa: To help fund renewable energy projects, even as it remains open to supporting fossil fuels, Africa’s biggest lender by assets, Standard Bank plans to raise as much as R300bn ($20bn) by 2026. In a statement yesterday, the bank pledged to achieve a net-zero carbon emissions target from its own operations by 2040 and from its portfolio of financed emissions by 2050, in line with the Paris Agreement. The bank added that it would fund energy and mining projects under “certain tightly defined circumstances” to achieve a just transition for the continent.

Ghana: Supply-side price pressures remained entrenched in Ghana in February. Specifically, producer price inflation rose further in February, coming in 21.4% y/y from 16.8% y/y in January. This was the fastest pace of price growth in the productive sector since June 2015 and was the sixth straight month PPI has risen. Rising PPI and consumer price inflation suggest inflationary pressures remain acute in the economy and could see the policymakers at the Bank of Ghana consider raising the policy rate at next week’s meeting.

Egypt: Rating agency Fitch expects the Central Bank of Egypt to hike its interest rate at the next meeting and has indicated that Egypt may require another IMF-funded program. In a report published yesterday, Fitch said that it “sees higher interest rates, exchange-rate depreciation and an IMF programme as being among the policy options available to the Egyptian authorities to shore up the country’s external position.” Egypt imports most of its wheat from Russia and Ukraine, using those supplies as the cornerstone of a bread-subsidy program for millions of people. Soaring grain prices as the war roils international markets is putting pressure on government finances. Moreover, the war is likely to dent tourism, one of Egypt’s main sources of hard currency. Note that a hike in the interest rate at the meeting next week would be the first since 2017.

Uganda: The IMF, in a report, has noted that the Shilling requires more flexibility to stem shocks. According to the Washington-based lender, greater exchange rate flexibility for the Shilling will be needed to help absorb external shocks and preserve external buffer. The IMF added that interventions “should be limited to smoothing large foreign exchange fluctuations and maintaining adequate reserve buffers.” Meanwhile, the external position is seen as being weaker than implied by fundamentals and desirable policy settings by the IMF, who said that this “reinforces the need for exchange rate flexibility, fiscal consolidation and structural reforms to boost growth.”

Mozambique: To help keep prices low while ensuring the security of supply, Mozambique has reduced a wide range of charges and costs for petroleum products. Reports citing the ministers of finance and energy suggest that the ministers ordered a 5% reduction to port handling fees for diesel and gasoline and a 60% drop in fuel logistics infrastructure costs for gas stations. Meanwhile, fuel distributor and retailer margins were reduced by 15%. The measures are set to remain in place as long as extreme rises in prices on the international market continue and could help ease inflationary pressures.

Nigeria: The Central Bank of Nigeria has instructed lenders to maintain intervention loans for one more year. Lenders are expected to extend the 5% interest payments on loans granted to companies impacted by the coronavirus pandemic to enable them to recover fully. The extension should take effect from February 28. In normal times the CBN usually charges about 6.9% on intervention loans.

Forex: Angolan Kwanza’s rally due to improving outlook for the economy - Governor Massano

This year, the Angolan Kwanza has strengthened by over 21%, making it the world’s best-performing currency against the dollar. The currency’s gains have coincided with a boom in the price of oil, which accounts for 90% of Angola’s export revenue. Brent crude prices almost doubled in the past year to as high as $139 per barrel earlier this month before paring some gains. Yesterday, central bank governor Jose de Lima Massano said that the Kwanza’s stellar performance resulted from an improving outlook for the oil-exporting economy and the liberalisation of its foreign exchange regime. According to the International Monetary Fund, Angola’s economy is forecast to expand 2.9% this year after exiting five years of recession in 2021. 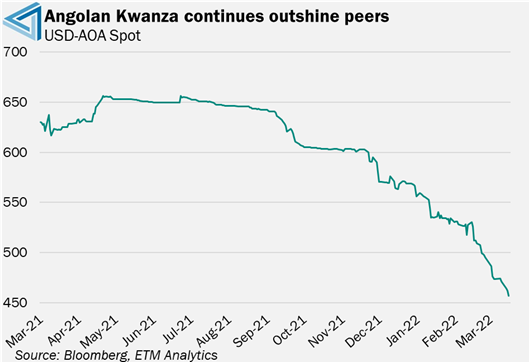 In addition to higher oil prices, some of the factors underpinning the improved outlook include solid international reserves, covering about 11 months of imports, and balance of payments surpluses, according to Massano. The governor added that the Kwanza is also recovering from a depreciation of “just over 80%” against the dollar that began after the bank ditched the Kwanza’s peg to the dollar in 2018. This step was among measures to narrow the premium of around 150% between the official Kwanza exchange rate and its price on the parallel market. According to Massano, the Kwanza’s “balance has been restored.”

It is worth pointing out that the Kwanza is overvalued by around 12% on a real effective exchange rate basis. Risks for further overvaluation exist in the near term should oil prices remain buoyant, fiscal dynamics continue to improve, and the government implements further reforms.

Market focus this morning is squared on the FOMC rate decision overnight as traders digest the Fed hawkish rate hike. In line with expectations, the Fed hiked rates by 25bp at its March meeting, signalling the start of the first tightening cycle since 2018. The final vote was 8 – 1 in favour of the 25bp rate hike, with Fed member Bullard voting for a 50bp rate increase.

The dot plot, the Fed’s implied policy path, meanwhile, shows that the central bank expects there to be six more rate hikes this year. This is in line with what the market has priced in and comes despite the growth risks that the economy faces now due to the conflict in Ukraine, soaring inflation and persisting supply chain challenges.

In terms of its balance sheet, the Fed noted that it would begin unwinding its $8.9trn worth of assets at a “coming meeting” without providing much more detail in that regard. It also provided new economic projections, with inflation expected to end this year at 4.3% now, well up from the prior forecasts. The estimate for economic growth for this year was lowered to 2.8% from 4%, while the expected unemployment rate was left unchanged.

In conclusion, Fed has not been swayed by the mounting growth risks facing the US economy, sticking to its very hawkish stance, which will see a total of seven rate hikes this year as things currently stand. The hawkish Fed will keep providing the USD with support over the near term, but there are still risks that it could be forced to revise its policy stance once growth starts to slow. 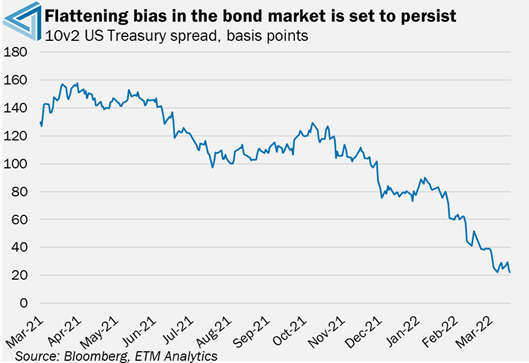 For the fixed income market, persistently strong inflation, which has translated into a hawkish bias across central banks the world over, suggests that the broader flattening bias which has been in place for some months now is expected to persist. Mounting growth concerns underpin the noting that curve flattenings will continue in the weeks and months ahead unless there is a material shift in monetary policy or global inflation pressures fall sharply.

Kenya is in the firing line of fiscal hawks following the marked fiscal deterioration that has taken place during President Kenyatta’s reign. In a bid to help resolve some of the country’s fiscal pressures, Presidential hopeful Raila Odinga, who incumbent President Kenyatta backs to take over the helm of Kenya, said that if he wins, he will seek improved debt repayment terms for the country.

Odinga said in an interview on Wednesday that the country’s massive debt pile of $100bn has forced the country to seek help from the International Monetary Fund. The Presidential hopeful said that “such austerity programs are usually implemented in the sole interest of satisfying the debt repayment at the expense of people’s livelihood. We have no choice in the matter.”  While an IMF program is highly beneficial for a country in debt distress that is looking to resolve its fiscal issues, the stringent fiscal measures included in an IMF deal often have harsh near term implications for an economy and the people of the country.

If successful at the August 8 election, Odinga said his government would strive to borrow at favourable rates, negotiate repayment periods that are not stressful, and invest in enterprises that give good socio-economic returns, adding that the tax burden is unbearable. Odinga said Kenya would not default, noting that the country’s troubles with debt are in part caused by corruption, kleptocracy and so-called state capture.

While improved lending terms would help ease the fiscal burden for the government, the comments from Odinga appear to be popularist in nature and don’t come across as consolidatory in terms of the country’s fiscus. Therefore, we remain of the view that the fiscal outlook for Kenya remains gloomy. From a market perspective, if the government does strike a deal with the IMF, the accompanying fiscal consolidation terms would be bullish.