The USD has come under some pressure following much weaker than expected data that was released yesterday. Investors are questioning whether they have been too quick to price in the chance of tapering, given the many growth challenges that persist. The recovery from lockdowns will be bumpy and fraught with fits and starts. The Fed might find itself debating the timing of the taper and may err on the side of tapering more slowly than previously anticipated, which could result in other major central banks reducing monetary stimulus faster than the Fed. For now, the USD is on the defensive and could depreciate a little further before it stabilises.

In the commodity market, A cash squeeze is presently underway in the copper market as the premium that spot is demanding over its 3m counterpart on LME is trading at $1103.50/tonne versus $55.00/tonne a week ago. Levels this high were last seen in 1994 and it shows a severe tightness in the market. LME inventories have fallen by more than 90% over the past two months after a surge in orders took out most of the near term supply. Physical supply is also falling in China and the United States which does suggest the near term price pressures will be embedded

Egypt: On the sidelines of the 2021 International Monetary Fund and World Bank fall meetings, Finance Minister Mohamed Maait said that the country aims to reduce the budget deficit to 6.7% and increase the GDP growth rate to 5.4%. Maait added that the Egyptian government adopts a financial policy balancing between maintaining financial stability, supporting manufacturing and export activities, and strengthening social protection networks. The targets by Maait compare to a GDP rate of 3.3% and an overall budget deficit of 7.4% recorded in the 2020/2021 fiscal year.

Egypt: Data from the Central Bank of Egypt showed that remittances from Egyptian expatriates climbed 10.2% or $1.7bn during the first seven months of 2021, recording $18.7bn, compared to $17bn during the same period of 2020. In July 2021, remittances, however, fell slightly by 3%, recording $2.79bn, compared to $2.88bn in July 2020. Note rising remittances, record forex reserve levels, and a highly competitive real rate continue to underpin the Egyptian pound's resilience.

Ghana: Speaking at the Ghana Economic Forum, Bank of Ghana Governor Ernest Addison said that the central bank expects inflation to settle at the upper limit of the 6%-10% target bank in the absence of new shocks. Recall headline inflation in Ghana exceeded the central bank's target range of 6%-10% in September after supply bottlenecks, a weak cedi, and surging costs propelled food-price growth to seven month high. However, given the upcoming harvest season, food price inflation is expected to abate and help cool inflation.

Morocco: Budget Minister Faouzi Lekjaa told reporters that the budget shortfall is expected to fall from a projected 6.2% this year amid anticipation the 2021 recovery will continue through 2022. Lekjaa added that the economy is “gradually returning to normal” output levels  and that a “positive improvement in macroeconomic balances” in 2022 will strengthen the Kingdom’s “financial sovereignty.”

Mozambique: Reports citing sources close to the matter suggest that Credit Suisse Group AG is nearing an agreement with the US  government that would resolve a criminal probe regarding its role in a $2bn Mozambique bond scandal. The discussions with the US Justice Department involve a deferred prosecution agreement that would include a fine, and an agreement is expected to be announced today. Any deal with US prosecutors would be the latest action in a multi-year, international legal saga arising out of the 2013-14 deals that were supposed to fund a new coastal patrol force and tuna fishing fleet in Mozambique.

Nigeria: Nigeria's Minister of Finance, Budget and National Planning has noted that the ministry is collaborating with the central bank to reduce the gap between the official and unofficial dollar rates by improving foreign exchange inflows. The minister added that the Federal Government aims to improve sources of revenue, with the predominant source being oil and gas. Meanwhile, the central bank has stated that the eNaira would ultimately boost remittance inflows into the country.  A shortage of forex further exacerbated by the central bank's move in July to cease supply of $5.7bn annually to the country's bureaus of change, a key source of foreign exchange for Nigerians travelling abroad and local businesses, has significantly widened the premium between the parallel rate and official rate.

A large contributor to hard currency inflows into Uganda is Coffee, given that the country is Africa's second-biggest producer after Ethiopia. It is therefore worth looking at the latest coffee export numbers. Uganda Coffee Development Authority (UCDA) yesterday reported that coffee shipments in the 12 months through September climbed 21.1% to an annual record of more than 6.49mn bags. The value of exports rose 23% to $629.89mn from $512.22mn a year earlier, with Italy importing 27.75% of the beans last month. Other top destinations were Germany, Algeria, India, Sudan, Morocco, and the US. 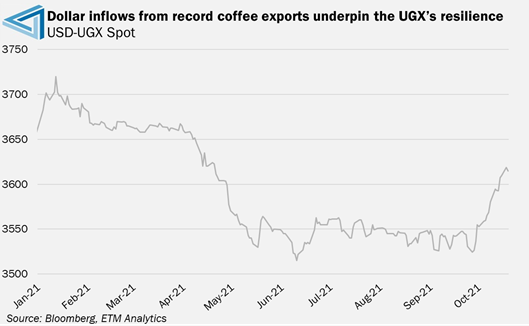 From a currency perspective, record output export levels will boost dollar inflows into the country and have been in part responsible for the Ugandan Shilling's stellar performance on the year thus far. The UGX, up by +1.05% on a year-to-date basis, has been the shining light in the East African FX complex, outperforming its peers and is currently ranked the 5th best-performing African currency against the USD. A further tailwind to the UGX's resilience has been a highly competitive real rate which has supported its carry appeal. For context, Uganda's real rate (Policy- CPI) currently stands at 4.3%.

In the near term, the UGX is likely to continue outperforming its East African peers as portfolio investors are anticipated to stay active amid the high real positive rates on offer and as Uganda's coffee-growing campaign continues to lead to record export levels. For this week, the UGX is expected to remain steady following last week's central bank decision to keep its benchmark lending rate unchanged amid economic risks from the coronavirus pandemic.

Soaring inflation and its impact on monetary policy remain the focal points for investors at the moment. Inflationary dynamics have been the main driver behind movements in the global bond market in recent weeks as investors price for the eventual tightening of monetary policy in the world’s largest economies. Note that many market players are betting that the likes of the Federal Reserve will begin winding up its asset purchase program as early as next month, with rate hikes seen at the end of next year.

While much of the policy tightening has been priced in already, given how sticky inflation pressures are, the risk remains that central banks the world over will have to adopt even more hawkish policy to quell inflation in their respective economies. The main concern for investors at the moment is that the recent bout of inflation will prove to be more sustained than policymakers expected, forcing central banks to accelerate interest rate hikes and thereby pressure the economic recovery. 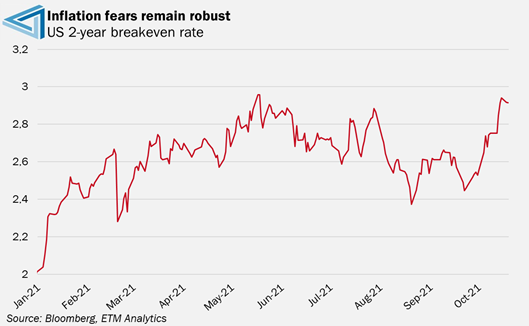 Underpinning inflations expectations is the combination of a global supply crunch, soaring food and energy prices and the reopening of economies across the world, which is boosting demand-side inflationary pressures. Going forward, the big question for traders will be when major central banks begin to normalise policy and to what degree. Note that we have already seen several major emerging market central banks hike rates this year, with Brazil being the most aggressive. While some African countries have already hiked rates this year, African central banks for the most part have opted to keep rates on hold. That said, we do expect most African central banks to hike rates in the coming months, especially as major central banks such as the Fed begin to tighten policy.

Appetite for risk returned last week, resulting in an influx of funds into emerging market assets. This is apparent when looking at the latest weekly ETF data published by Bloomberg on Monday. Specifically, money managers pumped $720.7mn into US-listed emerging market exchange traded funds last week, snapping a 3-week losing streak as investors fretted over the outlook for US monetary policy and the cracks emerging in China.

A breakdown of the data showed that the bulk of inflows were into stock ETF, which expanded by $592.3mn. Emerging market bond ETFs listed in the US meanwhile rose $128.4mn last week. Bloomberg said that China and Hong Kong attracted the biggest inflows last week. Brazil also witnessed a significant inflow of funds last week. With the exception of Mozambique, all African countries tracked by Bloomberg witnessed inflows last week with the most notable expansion in US-listed ETFs that invest in South African assets.

Going forward, risk appetite has eased at the start of this week on the back of the disappointing Chinese GDP data released on Monday. China’s Q3 GDP print showed that a housing slump and power shortages weighed on economic activity in the world’s second-largest economy last quarter. That said, risk sentiment appears to have improved today with Asian stocks a sea of green this morning ahead of a busy week of earnings reports. That said, we expect investors to trade cautiously in the session ahead.