Fixed Income Strategy: Is there value to be found going long Ghanaian bonds?

The sharp sell-off in Ghanaian bonds this year and the recent shift in fiscal policy from the government have raised the question of whether there is value in going long Ghanaian bonds at current levels. Since their lows in 2021, Ghanaian bond yields have more than tripled amid fears over the country's ability to refinance itself in the international debt market due to tightening global financial conditions against the backdrop of deteriorating appetite. This comes against the backdrop of persistently weak tax revenues, an inflated public sector wage bill, wasteful fiscal spending and mounting concerns over the country's ability to roll over maturing debt. 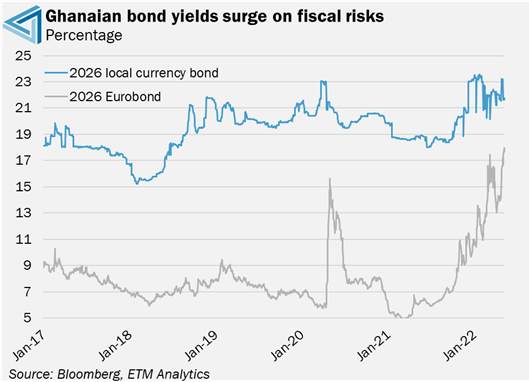 If there is value to be extracted from the Ghanaian bond market, investors will have to decide whether to deploy funds into local currency bonds or dollar-denominated bonds. This decision will be based on one's outlook on the Ghanaian Cedi, as this will play the most significant role in determining the variance in returns between the local currency and hard currency Ghanaian sovereign bonds. This piece aims to answer two questions firstly, is there value to be found going long Ghanaian bonds and secondly, can more alpha be extracted from local or hard currency bonds on a relative basis? 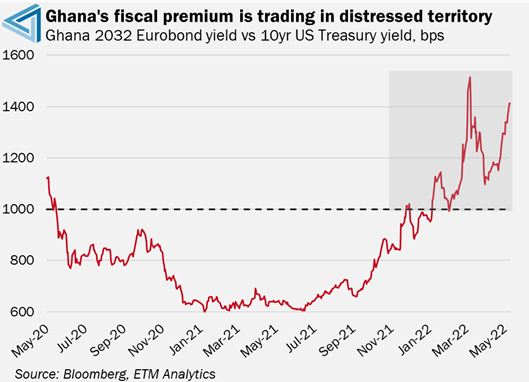 While Ghanaian bond yields have surged in recent weeks on the back of the hawkish pivot from central banks and prevailing risk-off conditions, there was a temporary recovery earlier this year after the government announced a shift in policy, including measures to trim expenditure while at the same time increasing government tax collections. The modest recovery in Ghanaian bond yields signifies that the market is receptive to policy developments. 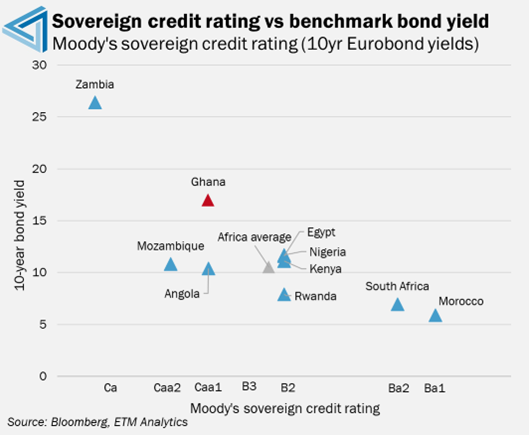 That said, it is clear that the market is not entirely convinced that Ghana's government is fully committed to steering the country's finances back towards a sustainable debt position. The risk premium demanded by investors for holding Ghanaian bonds has skyrocketed in recent months as the combination of surging supply-side cost pressures and deterioration in global risk appetite compound the country's already elevated fiscal risks. Recall that the combination of tightening global financial conditions, the lack of commitment from the government to rein in its spending and lower than expected revenue collections prompted the start of a sharp sell-off in Ghanaian bonds in September last year. 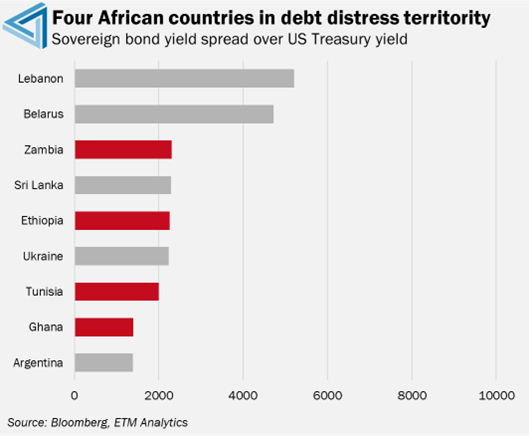 Since the sell-off began in September last year, Ghana's 2026 Eurobond yield has surged more than 1000bps to reach levels close to 18%, placing it among the world's worst-performing bonds over the past six months. Ghana's fiscal premium, the spread between Ghana's 2032 bond and the comparable US Treasury yield, meanwhile sits north of 1400bps, putting its well above the 1000bps debt distress threshold. Moreover, it is worth noting that Ghana's fiscal premium has widened significantly over recent months relative to its African peers.

Is there enough upside potential to offset the country's fiscal risks?

There is no doubt that fiscal risks in Ghana are acute. This is reflected by the multiple rating downgrades and massive fiscal premiums baked into Ghanaian assets, with ratings agencies and investors fearing that Ghana's massive debt pile and narrow tax base will jeopardise its access to international capital markets, where the country has been refunding itself in recent years. Embedded rigidities in the nation's fiscal framework remain an area of concern for market participants, rating agencies and investors. 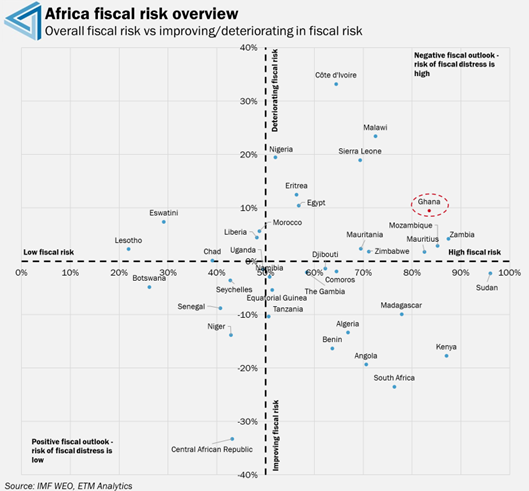 The sovereign credit rating vs bond yield chart shows that Ghanaian bonds looks attractive in relation to the bonds of similarly rated countries on a risk to reward basis. Ghana's 2032 Eurobond yield, rated at Caa1 by Moody's, is trading north of 17%, while comparable bonds of similarly rated Gabon and lesser rated Mozambique are trading at 10.8%.

Fitch and Moody's flagged concerns over Ghana slipping into a position of fiscal distress in their recent credit rating downgrades, which led to widening yield spreads on both Cedi-denominated government bonds and the nation's Eurobonds.

More doom lies ahead for the Cedi

The Ghanaian Cedi has come under severe pressure this year, with the currency overshooting its long-term trend. The Cedi is the worst-performing African currency against the USD on a year-to-date basis, down more than 18% after trading at record low levels. Its downward spiral can be attributed to perceived economic risks due to high-interest payments on borrowed funds and financial challenges, half a decade-high inflation, rating downgrades, high demand for hard currency amid low supply, and waning confidence in the country's policy credibility. This has fuelled the selling of the country's international bonds by some investors and, consequently, reduced foreign inflows. The strengthening of the US dollar, liquidity pressures, portfolio reversals, and some speculative pressures are also contributing factors. 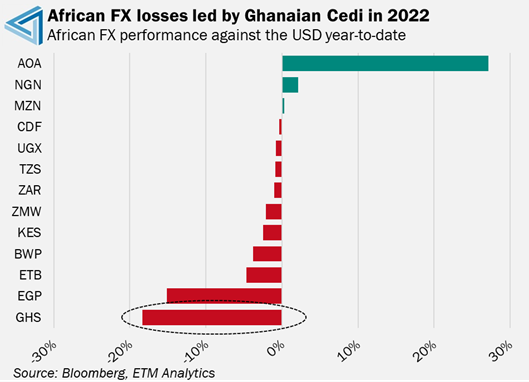 In light of this, it is unsurprising that the Bank of Ghana (BoG) has instituted measures to halt the Cedi's depreciation. To increase the supply of dollars in the market, the bank announced that it would sell a total of $350mn to authorised dealers in a Foreign Exchange Forward Auction in Q2, selling $100mn in April and June and $150mn in May. Notably, the nation's foreign reserves have fallen by more than 15% in recent months. The reality is that the percentage drop is likely to increase as the central bank remains a backstop to currency weakness. The question is how long the central bank will be able to prop up the currency as limited inflows suggest that foreign reserves face increased downside risks in the coming months. 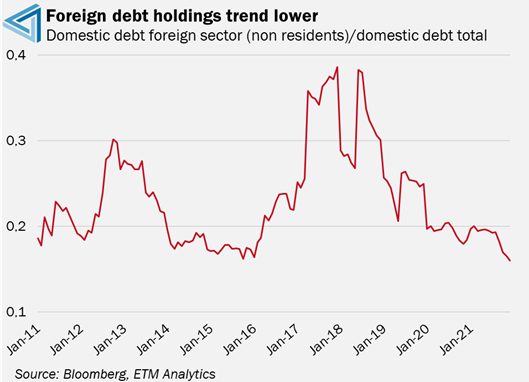 While the measures mentioned above and positive fiscal developments through the passage of the e-levy may ease the pressure on the Cedi in the near term, fiscal concerns remain a headwind for the currency. Concerns about the credibility of the country's fiscal targets remain, while an unfavourable external backdrop, including the Ukraine conflict and tightening global financial conditions, will come as further headwinds to the Cedi. Overall, the outlook for the Cedi remains decisively bearish. While the Bank of Ghana could intervene to halt the slide in the GHS by injecting more dollars, we are of the view that persisting fiscal concerns, especially as financial conditions continue to tighten, will remain a significant downside risk to the currency.

Ghana's massive public debt pile, estimated at 82% of GDP at the end of 2021, is higher than similarly rated peers. The high level of debt servicing costs, given the government's structurally low revenue, is of more significant concern. The government recently passed a tax reform on electronic payments while also announcing a 10% discretionary spending cut and a 30% cut to governments ministers' salaries to help ensure that it meets its budget deficit target of 7.4% of GDP in the current fiscal year, down from a projected 12.1% last year. It is a positive step toward returning the country to a sustainable fiscal path, but more bold fiscal reforms are required until its tax revenue issues are resolved. 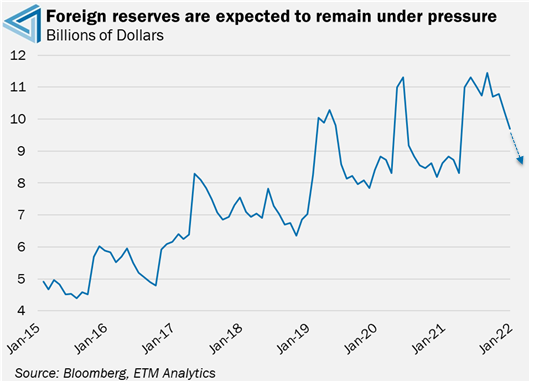 About half of the government debt is denominated in foreign currency. This presents a challenge for the government because it depends on maintaining access to international capital markets, rendering the nation vulnerable to increased financing costs, more credit rating downgrades and currency depreciation. There are reports that the government plans to raise around $2bn in syndicated loans from commercial banks and multilateral lenders to try and bolster the GHS. With an International Monetary Fund (IMF) bailout strictly off the agenda, Ghana is banking on a domestic solution to revive the economy, which continues to grapple with the fallout of the Covid-19 pandemic and the Russia-Ukraine war. President Nana Akufo-Addo's government wants to avoid the political consequences of seeking a bailout now. However, it remains one of the ways to restore the country's debt sustainability and macroeconomic stability.

Ghanaian bonds have been the hardest hit in Africa. This comes against the backdrop of persistently weak tax revenues, an inflated public sector wage bill, wasteful fiscal spending, and mounting concerns over the country's ability to roll over maturing debt. Ghana has financed a significant portion of its budget shortfall in the international debt market by issuing Eurobonds. Until the hawkish shift from major central banks in September last year, lending conditions in the international bond market were favourable due to record low-interest rates and a healthy risk appetite. This backdrop afforded Ghana the chance to raise funding at low costs in recent years. However, due to the significant deterioration in Ghana's fiscal outlook and the hawkish pivot in monetary policy around the globe, investors are demanding massively increased premiums for holding Ghanaian debt. 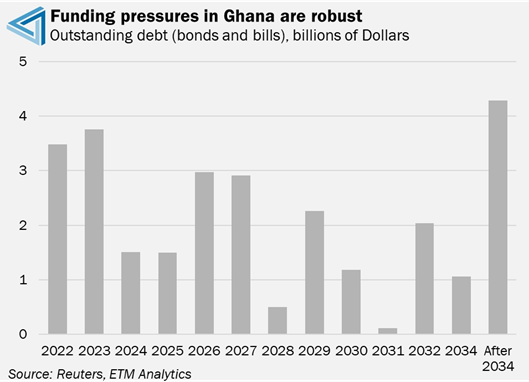 The big question now is whether there is room for a recovery in Ghanaian bonds or whether investors will continue to demand a massive premium for holding Ghanaian debt. The answer to this rests on whether the market is convinced that the government is committed to reining in the country's inflated debt pile and rolling out much-needed fiscal reforms to put the country back on a sustainable debt path. In the near term, we expect the bearish bias to persist. With the likes of the IMF placing Ghana in the debt distress category against the backdrop of worsening external conditions as international commodity prices surge and deterioration in risk appetite amid mounting tensions in Europe, we expect the sell-off in Ghanaian bonds to persist in the near term. 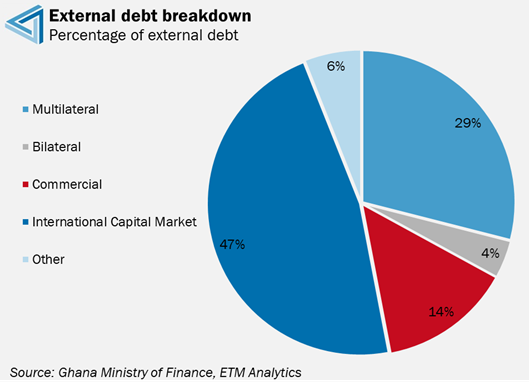 Bottom Line: It is clear that Ghana faces substantial default risks, which is reflected by the steep rise in Ghanaian bond yields that are now amongst the highest in Africa. While we advise against going long Ghanaian bonds in the next 1-6 months, given the uncertainty, there is an opportunity to go long in the next 6-12 months should the government remain committed to its reform agenda. Equally, ETM’s house view that major central banks will reverse their policy rhetoric in 2023 amid mounting growth risks which will provide much-needed reprieve for bond markets as a whole.

Lastly, with currency risks expected to remain skewed to the upside over the medium term, we favour Ghanaian Eurobonds over local currency bonds.