After closing Monday’s session flat amid thin liquidity conditions due to a bank holiday in the US, the USD has edged lower this morning as markets remain focused on posturing from major central banks on the path of monetary policy. An improvement in risk sentiment this morning has added to the headwinds for the USD. The strong rebound in the risk-on impulse and the broad-based USD weakness is providing a boost to high beta emerging market currencies this morning. The South African rand and the Polish zloty are leading the charge ahead of the European session. G10 currencies are being led higher by the Canadian dollar and the British pound. With US markets returning to trade today, liquidity conditions are expected to improve. Volatility is also likely to increase as traders position themselves ahead of all the central bank speak this week.

Egypt: A Cabinet’s Information and Support Center report showed that Egypt’s trade deficit narrowed by 8.1% y/y to $10.2bn in the first three months of 2022, as rising oil and non-oil exports outpaced growing non-oil imports. A breakdown of the data shows that total exports surged, growing by 44% y/y to $13.98bn in Q1, on the back of surging oil and non-oil exports. Meanwhile, Egypt’s overall import bill grew by 16% y/y to $24.2bn in Q1. Despite the narrowing of the trade deficit, it remains sizeable and will continue to detract from the current account and, by extension, the local currency.

Kenya: Data from the Central Bank of Kenya showed that remittance inflows rose by 7.6% y/y to $339.7mn in May 2022. Meanwhile, the cumulative inflows for the 12 months to May 2022 totalled $3.992bn, an increase of 18.6% y/y. The US remained the largest source of remittance inflows into Kenya, accounting for 57% in May. The continued growth in remittance inflows is set to support the current account and may help ease the dollar liquidity shortage, which has weighed on the KES in recent weeks.

Kenya: Speaking yesterday, Kenya’s health minister forecast the number of new coronavirus infections to worsen amid the current cold season and political gatherings ahead of the August polls. Kenya is currently experiencing a sixth wave of infections, with the average positivity rate spiking to 10.7% in the week through June 19 from an average of 0.6% at the beginning of May. The health minister has therefore reinstated mandatory mask-wearing in indoor public spaces, including public service vehicles and flights, to tame the spread and warned that if the current trajectory persists, the eagerly anticipated August polls could be affected.

Mauritius: The IMF forecasts GDP growth in Mauritius to reach 6.1% this year, supported a revival of the tourism sector, with arrivals anticipated to reach 60% of the pre-coronavirus pandemic level. However, the IMF cautioned that the positive outlook this year is subject to significant downside risks, including the impact of the Russia-Ukraine war, which has disrupted supply lines and pushed up food and fuel prices. Meanwhile, the IMF staff has recommended a new monetary policy framework to be rolled out by Mauritius to support policy effectiveness as fiscal consolidation needs to be calibrated to balance recovery with long-term fiscal and debt sustainability.

Nigeria: Nigeria has reportedly blocked the repatriation of $450mn in foreign airline revenue. The move comes as the country has restricted access to foreign currency for imports and for investors seeking to repatriate their profits as Nigeria is experiencing a severe dollar shortage. According to the International Air Transport Association (IATA), $1bn of revenue belonging to foreign airlines is being withheld across Africa but Nigeria is the only country where the value of blocked funds has risen. The $450mn, the largest amount withheld by any African country, in May was 12.5% higher than the previous month. IATA has warned that the decision could negatively affect the country’s aviation industry and economic growth.

South Africa: Ailing state utility Eskom announced the return of stage two load-shedding between 5pm and 10pm until Thursday due to an ongoing shortage of generation capacity. It noted that it had 5,232MW on planned maintenance, while another 14,202MW of capacity was unavailable due to breakdowns that may also keep the risk of load-shedding elevated in the weeks ahead. The lack of stable electricity supply is just one of many well-documented growth headwinds that are preventing a stronger recovery despite the boost in economic activity after the post-COVID reopening. These countervailing economic forces are set to be reflected in today’s release of the SARB’s leading indicator for April, to which ZAR traders will be paying close attention given the implications of growth momentum for prospective SARB policymaking and SA’s trade and current accounts.

While most African currencies have come under pressure amid a plethora of headwinds ranging from the war in Ukraine, idiosyncratic challenges, and dollar liquidity challenges as global financial conditions continue to tighten, the Zambian Kwacha remained resilient in Q2. The Kwacha is currently the best performing African currency on a quarter-to-date basis against the USD, chalking up gains of 6.44%. The ZMW’s performance in Q2 suggests that the currency is on course to erase losses of 7.84% recorded in Q1 2022, ranking it among the bottom three performers during that period. 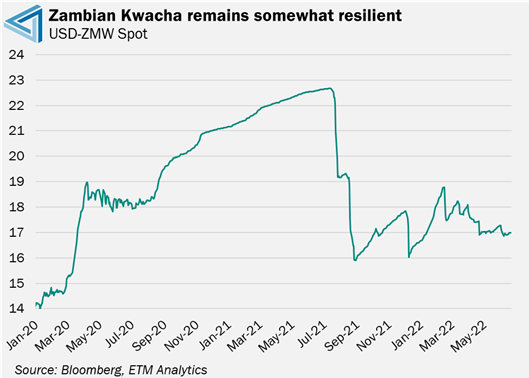 Pulling back the lens, the Kwacha has firmed significantly over the past eleven months. Since the record high at the end of June 2021, the currency has advanced by around 25% against the USD. The notable strength in the Kwacha has come on the back of favourable political sentiment following the election of Hakainde Hichilema as the President of Zambia. More recently, some support has emanated from central bank intervention and positive sentiment amid rising investor confidence in the economy. Ongoing credit talks and a promising mining sector outlook have provided a boost to sentiment. Zambia is becoming a more attractive investment proposition for mining companies since the election of Hichilema and a subsequent mining tax reform.

Beyond this week, where the Kwacha is expected to remain steady amid increasing hard currency supply from companies and continued support from the central bank, further strength in the coming months will ultimately depend on how soon debt restructuring can begin and IMF board approval can be granted. Any further delays could prevent the Kwacha from meaningfully appreciating further in the coming months.

Fixed Income: Fitch removes Uganda from negative watch amid expectations for a stabilisation in the country’s debt

The start of the new week brought with it some positive developments for Uganda. Fitch upwardly revised its outlook on Uganda's long-term foreign-currency issuer default rating to stable from negative and affirmed the rating at B+. The revision of the outlook reflects Fitch's expectation that the sustained recovery in real GDP growth and fiscal deficit reduction will lead to a broad stabilisation of the government debt to GDP ratio.

Fitch added that while rising inflation and tighter financing conditions pose risks to the near-term growth outlook, and this could slow the pace of the fiscal adjustment, the agency expects increasing investment into the hydrocarbon sector to support robust growth over the medium term. Fitch expects Uganda’s economy to grow by 4.8% in 2022, down from 6.0% in 2021.

The expected deceleration in growth comes on the back of the strong post-pandemic recovery of 2021, as well as downside risks from global growth, supply shocks and tighter financing conditions. Fitch forecasts real GDP growth to remain robust at 6.4% in 2023, broadly in line with Uganda's pre-Covid-19 growth levels. On the fiscal front, Fitch forecasts Uganda's general government deficit to narrow to 7.5% of GDP in the fiscal year ending June 2022,  from 9.2% in FY 2021. This lower budget deficit is the result of lower Covid-19-related spending. 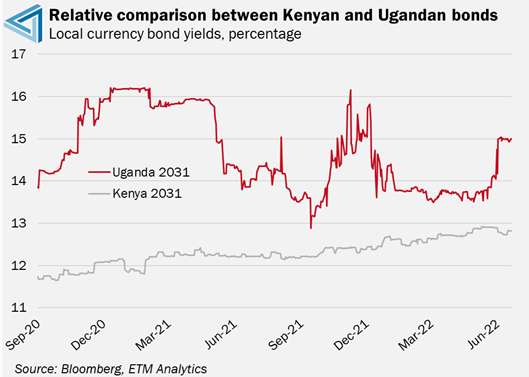 Tax administration reforms have improved tax performance. Tax revenue increased to 12.4% of GDP after averaging just above 11.0% over the previous 10 years. Fitch said that it expects Uganda’s revenue performance to remain above 14% in the forecast period, but the lack of new revenue measures in the FY 2023 budget will limit further improvement. The agency expects the fiscal deficit to narrow to 6.7% of GDP in FY 2023. Recall that Uganda is under a $1bn IMF Extended Credit Facility and successfully completed the first programme review in March 2022. The IMF programme will disburse $250mn plus make available an additional $130mn in multilateral lending. In conclusion, Fitch said it expects the balance of external debt servicing costs to be met with external commercial borrowing. According to the agency, the government will meet its deficit financing needs through external project lending and domestic debt issuance. As such, Fitch sees a low risk of Uganda slipping into a position of fiscal distress. That said, we still assess the outlook for Ugandan bonds to be bearish as inflation risks intensify and fiscal risks remain elevated.

Macroeconomic: Access to electricity in Africa fell during the Covid pandemic

IEA chief Fatih Birol said that before Covid, there had been lots of promising developments in countries such as Ghana, Kenya and Rwanda. Birol said, "but because of Covid and the economic difficulties, we see that this positive trend is reversing now." Birol added, "when I look at 2022, with the high energy prices and the economic burden on the African countries, I don't see many  reasons to be hopeful." The IEA highlighted that Russia's invasion of Ukraine has added to the economic strains on Africa from the Covid pandemic, as the conflict has sent the prices of energy, food and other commodities soaring.

To combat the recent degradation in electricity supply on the continent, the IEA head said that Countries need to give international financial institutions, especially development banks, a strong mandate to make Africa and clean energy on the continent an absolute priority. According to the IEA, Africa could get universal access to electricity by the end of the decade with $25bn in annual investment. Encouragingly, the IEA predicts that renewables, including solar, wind, hydropower and geothermal, could account for over 80% of new power generation capacity in Africa by 2030.

While Africa is home to 60% of the best solar resources worldwide, it only has 1% of installed solar energy capacity, highlighting just how far Africa still has to go. Energy scarcity is a significant constraint on economic growth in Africa. That said, meaningful investment into electricity projects in the years ahead could significantly boost economic growth across the continent.