Fitch Ratings warns of a possible default by Ghana

There was another rout in US Treasuries yesterday as the market continued to digest the hawkish Fed meeting from Wednesday. Most of the selling took place early in the US session, consistent with an unwinding of some flattener positions and general outright selling given the hawkish Fed. USTs may also be under pressure from speculation regarding the BoJ’s currency interventions. Reports suggest that the BoJ has not yet sold any USTs, instead opting to use dollars stored in a reverse repo facility it has with the Fed. However, if the intervention program is to be a prolonged one, the world’s largest holders of USTs will need to unwind some of its holdings.

Gilts were also under pressure following the BoE meeting, which saw another 50bp rate hike announced. While this was lower than some expected, the disparity between voting members increased uncertainty regarding the bank’s future rate hike path, keeping front-end tenors under pressure. The rout in the US session for bonds has spilt over into today’s trade, with Australian bonds, for instance, under the pump as yields are rising as much as 19bp, aided by an increase in RBA rate hike expectations..

Notwithstanding the powerful intervention by the BoJ to help the JPY back towards 142.00/dlr, the trade-weighted USD has not lost much ground overnight. What retreat took place was fleeting, as investors focused on the Fed's commitment to stamping out inflation regardless of how stretched the USD had become.

South Africa: In line with expectations, the SARB increased the Repo Rate by 75bps to 6.25%. Three members of the committee were in favour of the 75bp hike, while the other two members preferred a bolder 100bps increase. The voting pattern suggests that the SARB is likely to remain aggressive in terms of interest rate hikes at the next meeting. This indicates that the SARB is committed to preventing the ZAR from blowing out while also reining in inflation expectations. The hawkish rhetoric in the policy statement suggests that we could see another outsized rate hike in November. However, this will depend on how the ZAR performs in the coming months. External developments will also be key. Oil in particular, could cause some two-way risk as markets position for the November MPC meeting.

Zimbabwe: While the sale of gold coins has contributed to withdrawing Zimbabwe’s dollar liquidity, the International Monetary Fund (IMF) notes that it represented a missed opportunity to build the country’s reserves. The country’s total reserves have fallen by more than 25% from the peak reached in August last year through June this year. The Reserve Bank of Zimbabwe plans to sell smaller denominations of gold coins from November, leading to a further drawdown in gold reserves and an overall depletion of the country’s reserves, which could present headwinds for the local currency.

Egypt: Egypt's Foreign Minister Sameh Shoukry met with his Russian counterpart Sergey Lavrov on the sidelines of the UN General Assembly to discuss the implementation of the Istanbul agreements on grain exports from Ukrainian ports. While we have seen a resumption of grain exports from Ukraine through the Black Sea port to the global markets in recent months, grain shipments remain below levels seen before the war, suggesting that countries like Egypt that relied on supplies from this region will continue to face a food supply crunch. Furthermore, the two ministers also discussed prospects for expanding trade partnerships in industry, energy, agriculture and tourism.

Ghana: Fitch Ratings warned of a possible sovereign debt default in Ghana against the backdrop of the country’s acute fiscal woes. Speaking at a press conference, the senior director at Fitch, Mahin Dissanayake, said that the operating environment is looking very fragile and debt distress will put much stress on the banking sector given that Ghanaian banks hold large volumes of government securities. Mahin added that Ghana’s plans to restructure the local currency debt as part of the IMF deal were highly unusual, and going through with such plans would likely cause significant problems for local banks.

Zimbabwe: With the wheat harvest season underway in Zimbabwe, expectations are that output will reach 380k tons from a 79k hectare of winter wheat. It is worth noting that the last time Zimbabwe produced a crop close to the current one was in 1990, with 135k tons. The bumper harvest suggests that there will be an adequate supply to meet the country’s demand for wheat and would lessen the reliance on wheat imports, especially in this current environment of a global food shortage due to the Ukrainian war. The Permanent Secretary of Lands, Agriculture, Fisheries, Water and Rural Development, Dr John Bhasera, noted the increase in wheat output was due to the ceasing of rolling blackouts and interrupted water supply.

Forex: Egypt goes against the tide and leaves rates on hold

While central banks around the world have hiked interest rates aggressively this week in a bid to quell soaring inflation, the Central Bank of Egypt’s Monetary Policy Committee opted to leave its benchmark interest rates on hold. Bucking economist expectations (Bloomberg) for a 50bps hike, the CBE decided to leave the overnight deposit rate, overnight lending rate, and the rate of the main operation unchanged at 11.25%, 12.25%, and 11.75%, respectively. The CBE did however raise the required reserve ratio to 18% from 14%. 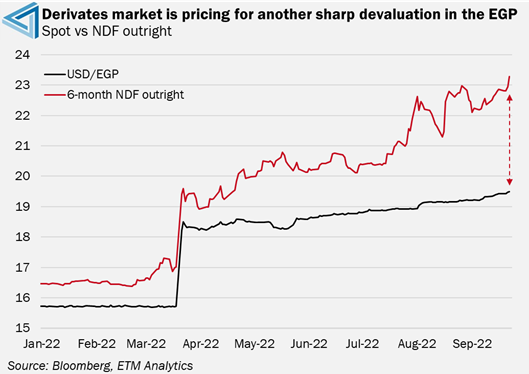 The MPC said in its statement that the current key CBE rates coupled with the increased required reserve ratio, are consistent with achieving price stability over the medium term. The CBE highlighted that the previous rate hikes are still transmitting through the economy. Recall that the CBE has hiked rates by 300bps during the current tightening cycle. The central bank noted that the elevated annual headline inflation rate would continue to be temporarily tolerated above the CBE’s pre-announced target of 7 percent +/-2ppts in the final quarter of 2022.

While the CBE shocked markets by leaving rates on hold, the MPC left the door open for more rate hikes should conditions warrant it. The MPC said it “will keep monitoring the global and domestic conditions for further developments and will not hesitate to utilize all available tools to achieve its price stability mandate over the medium term. The MPC reiterates that the path of future policy rates remains a function of inflation expectations rather than of prevailing inflation rates.”

Interestingly, there was no mention of the currency. Notwithstanding the sharp depreciation by the central bank in March and subsequent slide in the pound in recent months, speculators in the derivatives market are still betting on a second wave of depreciation in the EGP. Recall that a more flexible exchange rate is one of the prerequisites of an IMF deal, which the government is desperately pushing for. Non-deliverable forward outrights legged higher yesterday as the market priced for more currency pressure following the CBE’s decision to leave rates on hold. The professional market is now pricing in a 20% devaluation in the EGP over the next 6 months.

While yields across Kenya’s local currency bond curve are higher on a year-to-date basis, movements on the belly of the curve are more pronounced, reflecting increased fiscal fears. Yields from the 3-year tenor out to the 7-year tenor have risen by around 150bps since the start of the year. In comparison, the 1-yield is up around 85bps year-to-date, while the longer-dated 20-year yield has risen by just under 50bps. 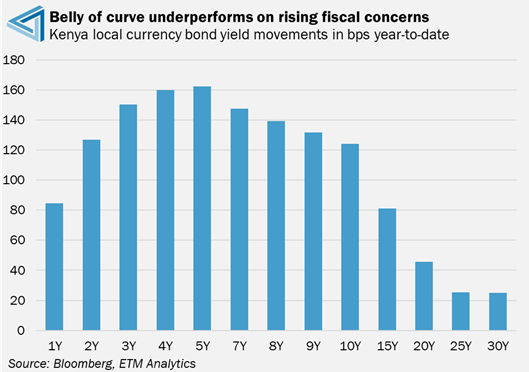 The underperformance in the belly of the curve is largely a function of the fiscal degradation that has taken place during the pandemic era and over the past decade as the government ramped up infrastructure spending. The fiscal degradation comes on the back of a challenging financing environment owing to rising global uncertainties and interest rates, drastically increasing debt servicing costs. The fuel subsidies, which are expected to conclude before the end of the year, have added to Kenya’s fiscal pressures. According to National Treasury, Kenya’s debt servicing costs could jump by a third this year to a record KES 1.39trn in the fiscal year through June 2023.

Although fiscal risks have intensified over the past two and a half years, it is worth noting that tax collections have been strong, helping to offset some of the fiscal pressures stemming from the adverse external conditions. Moreover, President William Ruto is showing signs that he is committed to steering Kenya back to a sustainable fiscal position. President Ruto implemented freezes on ministerial spending yesterday until a new cabinet is elected.

Governor of the Central Bank of Kenya Patrick Njoroge said yesterday that emerging market and frontier market nations need to manage their debt better after being priced out of global markets, where many countries have been refinancing themselves in recent years. These comments come after the central bank head told lawmakers to find ways of easing the country’s debt burden while supporting growth. One of the proposed measures was to fund infrastructure projects with private funds. Should we see more signs of fiscal constraint from the government, we would likely see Kenyan bonds outperform their African peers.

The world’s top gold mining executives see cost pressures remaining acute next year, suggesting that the headwinds facing gold producers are expected to remain robust in the months ahead. Economic and political uncertainty, supply-chain disruptions and surging interest rates have been the main factors putting pressure on miners and producers of the yellow metal. In addition to increased costs of production, the near-term outlook for gold prices remains challenging amid the strengthening USD and soaring US Treasury yields, which are detracting from the appeal of holding gold. 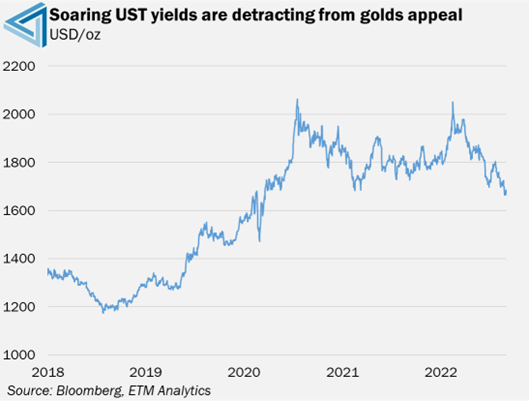 Rising costs have been plaguing mining companies and operations around the world. For example, South Africa’s Gold Fields Ltd. has been dealing with high labour costs that are driving up expenses. While we have seen a cooling of fuel prices, the price of other key components has remained elevated due to persistently strong inflation and ongoing supply chain issues.

Africa's top gold-producing nations are Ghana, South Africa, Sudan and Mali. While gold prices are still high compared to historical prices, the price of the yellow metal is down 17% from its peak in March. The pulling back in international gold prices will detract from the export sectors of Africa's top producers of the yellow metal. Lower gold prices could also weigh on the economic growth within these countries. Looking ahead, gold is likely to remain vulnerable to selling pressures if inflation pressures persist and central banks around the world are forced to continue hiking rates into 2023.