US Treasury futures are little changed in early trade this morning, holding onto yesterday's gains as the market awaits the first of the results from the US mid-term elections. A strong auction yesterday for 3yr and 7yr notes provided some additional support as expectations are that the Republicans will gain ground and hamper the Biden Administration's spending plans. Tighter fiscal policy means less borrowing and less stimulus-driven inflation, taking some pressure off the Fed to keep hiking rates which will ultimately support the bond market.

Meanwhile, core market bond curves across Europe flattened yesterday as front-end rates were paid higher while longer-dated tenors saw yields compress. This flattening speaks to growing economic growth risks spurred on by central bank tightening and the looming energy crisis. Gains for bund were, however, limited by the details of Germany's new borrowing plans. The usually fiscally prudent nation plans to double its borrowing next year to EUR45bn from the previously expected EUR17bn. Still, Germany's debt levels will remain well below its G7 peers, meaning that the initial reaction to the announcements should be short-lived.

Kenya: The International Monetary Fund and Kenya have reached a staff-level agreement on economic policies to conclude the reviews of the 38-month Extended Fund Facility and Extended Credit Facility arrangements. Once the IMF Executive Board formally completes the review, Kenya will have access to SDR 336.54mn ($433mn) in financing and will bring the total IMF support under these arrangements to SDR 1,202.31mn  ($1,548mn). This latter amount includes the proposed augmentation of access of SDR162.84mn to cover external financing needs resulting from drought and challenging global financing conditions. While the lender acknowledged that the economy remains broadly resilient, it cited volatile international commodity prices, tighter external financing conditions, higher inflation, a global slowdown in growth, and continued drought as creating a challenging backdrop for economic policymaking.

Botswana: The Minerals and Energy Ministry has shortlisted four candidates to design, finance, and build its biggest renewable project, a 200-megawatt concentrated solar plant. The top bidders include a consortium comprising Power China Resources Ltd. and Shandong Electric Power Construction Corporation III and another partnership involving the China- Africa Development Fund and Shouhang High-Tech Energy Co., as well as ACWA Power Co. and Cobra Industrial Services Pty Ltd. The plant, which will use lenses or mirrors to focus a large area of sunlight onto a receiver, should be operational by 2027 and will be Botswana's single largest renewable power plant.

Egypt: The International Finance Corporation is looking at providing $83mn to partially fund the planned 500-megawatt (MW) wind farm in Egypt, which will be the largest. The financing, which is pending approval, will compromise up to a $75mn loan and interest rate swaps worth nearly $8mn. The wind farm construction is expected to begin in March 2023, with operations likely starting in September 2025. The independent power producer project will be backed by a 25-year power purchase agreement with the Egyptian Electricity Transmission Company.

Ghana: Against a backdrop of a worsening economic crisis, Ghana's opposition yesterday introduced a motion in parliament to remove Finance Minister Ken Ofori-Atta. Haruna Iddrisu a minority leader in parliament, said that the proposal would be put to a vote by lawmakers on Thursday. Haruna added that the motion was underpinned by the economic challenges Ghana is currently facing and called on members of the ruling New Patriotic Party to back the motion, which will require two-thirds to pass. The Finance Minister has faced repeated calls by the opposition to resign after the nation's currency plunged and the yields on its Eurobonds surged over investors' concerns about the sustainability of its debt.

Kenya: As a labour dispute that has left thousands of passengers stranded dragged into a fourth day, Kenya Airways Plc terminated its recognition of a collective bargaining agreement with a pilot's union yesterday. According to a letter from the Ministry of Labour and Social Protection, the airline accused the Kenya Pilots Association (Kalpa) officials of disregarding dispute resolution mechanisms and ignoring a court ruling that declared industrial action illegal. Note that a labour court outlawed the strike on October 31, but Kalpa members went ahead and commenced one on November 5. They are seeking better working conditions, including reinstatement of KES 60mn ($493,000) monthly contribution to a staff provident fund. The airline normally operates 60-70 flights daily and, on average, transports 150 tons of fresh produce daily, including flowers which are among Kenya's top exports to Europe and the Middle East. A prolonged strike is likely to weigh on a major foreign exchange income source.

While the pressure on the cedi had eased towards the end of October and into the start of November, the reprieve has been short-lived. The cedi had halted its slump on the back of President Nana Akufo-Addo announcing that the bailout talks with the International Monetary Fund would not lead to bond losses for bondholders. However, those gains have since dissipated, with the cedi coming under pressure this week amid strong dollar demand against a backdrop of limited supply. 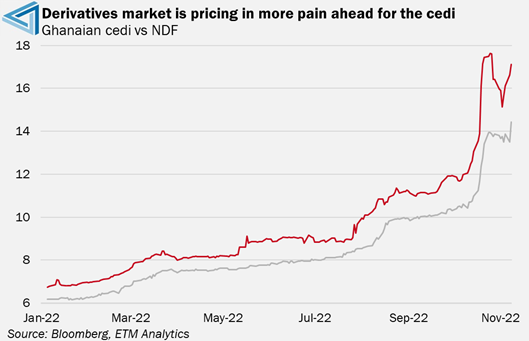 According to Bloomberg data yesterday, the cedi plunged to a fresh low and added to its year-to-date drop of over 57%. Those losses have made the cedi the worst-performing currency out of the 148 currencies tracked by Bloomberg. Some of the factors that have pressured the cedi this year are an exodus of foreign investors prompted by concerns over the sustainability of Ghana’s debt and an inability to tap into the international bond market.

While the comments by President Akufo-Addo had provided some relief for the cedi, it is worth highlighting that Ghana’s fundamental backdrop remains the same, and securing an IMF deal swiftly remains key to addressing its fiscal issues and the fortunes of the cedi. Barring such, the cedi is likely to remain under pressure in the near term. In the non-deliverable forwards market, the 6-month tenor is pricing in depreciation of over 18%.

African investors were greeted with more negative rating action yesterday. Fitch affirmed Egypt’s B+ rating on Tuesday but lowered its outlook for the country from stable to negative amid a deterioration in a number of key fiscal metrics. Fitch highlighted the following as factors that contributed to the downward revision of Egypt’s outlook: 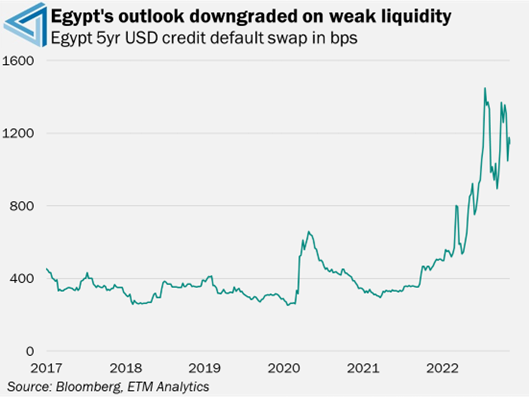 Looking ahead, while the government has rolled out some key reforms which have gained the country access to financial support from international lenders, including the IMF, fiscal risks in Egypt remain acute. The country's deterioration in global lending conditions is compounding fiscal pressures, given Egypt’s massive debt refinancing needs over the next two years. Despite the positive news relating to the IMF deal, Egypt’s 5yr USD credit default swap is still trading at distressed levels, reflecting the degree of fiscal risk being priced into the market.

Headlining the regional economic calendar on Tuesday was Tanzania’s Q2 GDP release. Data from the National Bureau of Statistics showed that economic activity decelerated from 5.5% y/y in Q1 to 4.8% y/y in Q2, marking the slowest growth rate since Q2 2021. Moreover, it is worth highlighting that the Q2 reading remains below the 5-year average growth rate of 6.0% y/y. 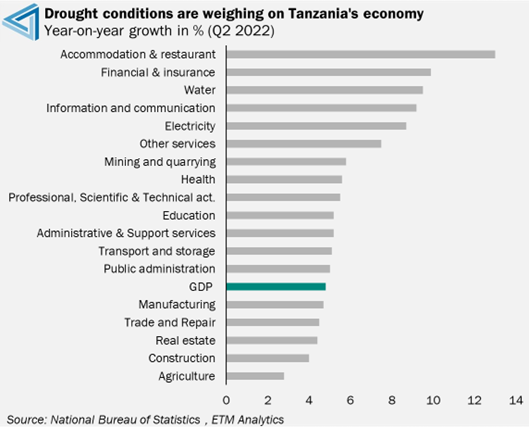 Details from the release showed that the services sector outperformed in Q2, with activity in the accommodation and financial & insurance sectors expanding by 13.0% y/y and 9.9% y/y, respectively, in Q2. The underperformer was agriculture, Tanzania’s largest sector by some way. For context, activity in the agri sector rose by 2.8% y/y in Q2.

Weighing on activity in the sector has been the devastating drought, which has constrained crop production. Concerningly, meteorologists have warned that the prolonged dry spell will continue. Four failing rainy seasons since late 2020 have caused the worst drought in East Africa in at least four decades. Given that agri sector makes up almost 30% of Tanzania’s GDP, the persistent drought conditions point to lacklustre growth in the quarters to come. Overall the slowdown in the pace of growth will raise uncertainty as to whether the government can meet its 2022 growth forecast of 4.7% especially given the spillover effects of the war in Ukraine and the lingering impact of the coronavirus pandemic.