UK inflation has risen to a 41yr high and is a real blow to an economy that has become accustomed to low inflation and low interest rates. It is a shock to the system and will prompt the monetary and fiscal authorities to do what they can to reign it in. But at 11.1% y/y and rising, the fundamental base for the GBP is eroding. Given the understanding that currencies adjust to reflect purchasing power parity over time, an economy with a high and rising inflation rate should lose ground to currencies with lower inflation. The inflation gap between the UK and the US is widening, not in the GBP’s favour. But while the inflation dynamics justify a weaker GBP view, much of that is already priced in.

East Africa: The head of the International Rescue Committee has called on donors to act now to save East Africa from a potential famine. Ethiopia, Kenya, and Somalia are experiencing their worst drought in four decades, the region faces a fifth consecutive failed rainy season, and the United Nations has said it expects a famine to be declared in parts of Somalia before the year ends. East Africa’s drought has been exacerbated by climate change and soaring global food prices.

Nigeria: Nigeria approved the construction of a 1,650 megawatt (MW) hydropower plant at the cost of $3bn, making it one of the most significant power projects in the country. According to a spokesperson for the vice president, the project is set to be funded under a public and private partnership arrangement. The spokesperson, however, stopped short of saying when construction would begin. The approval of the power plant is set to help alleviate some of the power challenges Nigeria faces. Nigeria struggles with low power output and limited transmission infrastructure, leaving many households and businesses reliant on diesel-powered generators.

Zimbabwe: As part of measures to ease demand for the US dollar as a store of wealth, the Reserve Bank of Zimbabwe has introduced smaller denomination gold coins. The announcement comes after Zimbabwe released one-ounce units on July 25 to expand investment options beyond the US dollar, mop up excess liquidity on the market and shore up the Zimbabwean dollar. There has been an outcry that the price of the instrument, averaging $1,800 each, was out of reach of poorer people, hence the central bank’s decision on August 11 to introduce the half-ounce, quarter-ounce, and one-tenth-ounce coins. The bank said it would release 4500 of the gold coins.

Ivory Coast: Ivory Coast is reportedly offering discounted cocoa in a reversal to end a bean feud. The World’s biggest cocoa producer is selling beans at a discount again after the policy it sought to end earlier this year triggered a slump in sales. When Ivory Coast insisted on being paid a premium for bean quality, sales slowed in September and October as some exporters balked at paying higher prices. Now exporters are buying forward-sale contracts with a negative country premium that offers a discounted price, according to people familiar with the matter. The negative premium is reportedly between $75-$100 a ton. Cocoa has climbed almost 10% since late October as the dispute between the regulator and exporters raised fears over supply. That comes as exporters are wary of paying higher prices as the risk of a global slowdown threatens the outlook for cocoa.

Ethiopia: The finance ministry and the telecoms regulator on Wednesday announced that Ethiopia had reactivated the process of selling a 40% stake in state-owned Ethio Telecom and a separate plan to issue a second full telecoms license. According to the finance ministry document, the government is asking international companies to submit expressions of interest for the partial sale of Ethio Telecom. Meanwhile, Ethiopia’s Communication Authority said it had revived plans to issue a second full-service telecoms license for a third telecoms company. The moves by the finance ministry and the ECA come after Ethiopia’s federal government and regional forces in Tigray signed a ceasefire agreement on November 2 to end the fighting and are part of Prime Minister Abiy Ahmed’s plans to free up the economy and lure foreign investment.

Supply-side inflation remained entrenched in the Ghanaian economy in October, with producer price inflation accelerating to 65.2% y/y from 45.6% y/y in September. That was the fastest pace of price growth in the productive sector since Bloomberg started tracking the times series data in September 2007. Barring September 2022, when PPI decelerated marginally, it has been on an upward trend since September 2021. The Ghana Statistical Service report showed that producer prices rose the most in the mining and quarrying, manufacturing, transport, and storage sub-sectors. 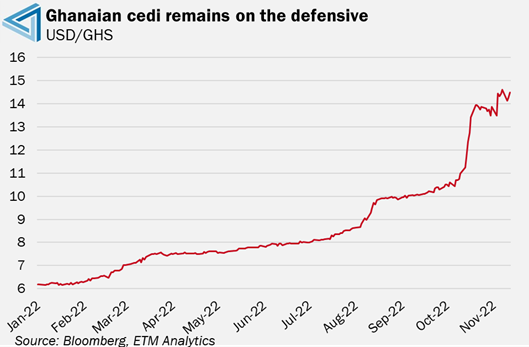 A weaker Ghanaian cedi also fanned inflation pressures in the productive sector in October. The cedi recorded a double-digit loss against the USD and was the worst-performing currency tracked by Bloomberg. The cedi also remains the laggard on a year-to-date basis, with the currency losing more than half its value. The cedi weakness has primarily been due to dollar shortages after an exodus of foreign investors prompted by concerns over the sustainability of Ghana’s debt and an inability to tap into the international bond market.

The cedi is on course to record its seventh straight monthly loss in November, barring any shocks. The last such streak was in 2015, and if history is anything to go by, this portends to further losses for the currency. For context, a Bloomberg study showed that investors who continued to bet on the dollar after the episode in 2015 gained an average of 17% over the next six months. As mentioned in previous commentary, Ghana’s fundamental backdrop remains the fragile, and securing an IMF deal swiftly remains key to addressing its fiscal issues and the fortunes of the cedi. In the absence of such, the cedi is likely to remain under pressure in the near term.

Fixed Income: Ethiopian bonds outshine as peace is restored in the country

While African bonds have staged a broad-based recovery in November as traders readjust rate hike bets on signs of a pivot in US monetary policy, the gains have vastly varied. One of the standout performers this month has been Ethiopia’s 2024 Eurobond, which has gained just under 20%. The outperformance of Ethiopia’s 2024 Eurobond has been driven by the recent signing of a peace deal to end the nation’s 2-year-long civil war.

In addition to stifling investor sentiment towards the country, the war has left millions of Ethiopians in need of aid and destroyed vital infrastructure, including hospitals and schools. The ceasefire has resulted in an influx of investor interest and has seen much-needed aid to the war-torn region of Tigray be restored. The United Nations announced on Wednesday that more aid would follow in the weeks ahead. 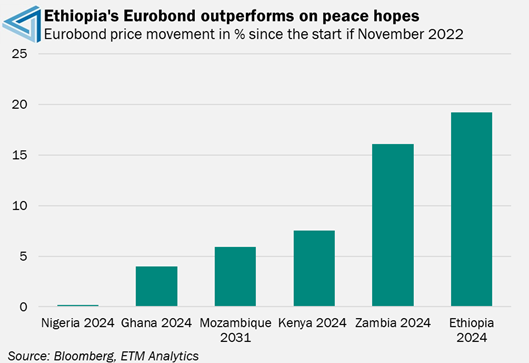 While Ethiopian Eurobonds have surged on the back of the peace accord, some details still need to be finalized, including how a new regional administration will be established. Though there is still a degree of uncertainty relating to the deal, the sharp rise in Ethiopia’s 2024 Eurobond price shows the degree to which markets can react to positive developments in Africa.

It must be noted that there are other factors to consider when comparing the performance of Ethiopia’s 2024 Eurobond to that of its peers, such as liquidity dynamics, the deep discount of Ethiopia’s 2024 Eurobond and maturity. However, even when considering those factors, it is clear that investors have reacted extremely positively to reports that peace in the country has been restored.

Macroeconomic: Nigeria’s forex issues are one of the main drags on its credit rating - Fitch

Nigeria remained in the spotlight on Wednesday following comments from global ratings agency Fitch. The agency said in an emailed statement that Nigeria needs to solve an acute shortage of foreign currency that is slowing economic growth if the country wants to improve its sovereign credit rating. In addition to the acute currency shortages, Nigeria’s debt-servicing costs, worsening liquidity, low oil production and expensive subsidy on imported gas saw the country slip further down the credit rating ranks last week. 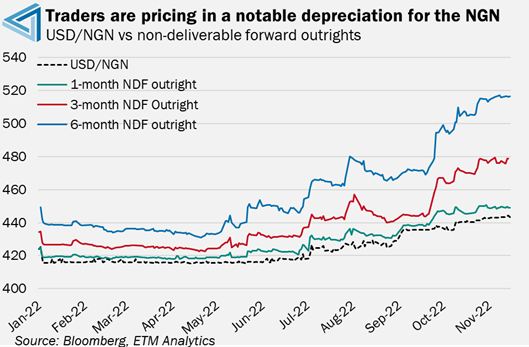 Fitch Director Jermaine Leonard said on Thursday that steps to ease foreign-currency liquidity and increase the credibility of the foreign exchange market would help trigger the conditions that will be a positive for the sovereign rating. Leonard added that such a move would be supportive of improved macro stability, higher non-oil growth and lower vulnerability to external shocks.

The forex shortages make it difficult for multinationals operating in Nigeria to expatriate profits and for domestic businesses to import goods and pay foreign suppliers. Bets for a marked currency devaluation in the non-deliverable forwards market are building. Pricing in the derivatives market suggests that we will only see significant moves in the USD/NGN in 2023. For context, the 1-month NDF outright is trading 1.28% above the spot rate, while the 3- and 6-month tenors are trading more than 7% above the spot rate. The big question for traders is whether the devaluation will come only after the presidential election on February 25.