The Jackson Hole Symposium is officially underway. As expected, Fed officials have reiterated their commitment to restoring price stability and reining in inflation expectations. Fed member James Bullard said officials should act quickly and lift rates to a 3.75% to 4.00% range by the end of the year. Bullard said, “I like the front-loading. I like the idea that you get the rate increases in earlier than later. You show you are serious about inflation fighting and you want to get up to the level that will put downward pressure on inflation.” Other Fed members speaking overnight reserved their judgement on how big the upcoming rate hikes should be but agreed rates need to rise. The Fed’s comments overnight have prompted a shift in price action in core bond markets. US Treasury yields are trading higher this morning after closing yesterday’s session considerably lower. The focus in the session ahead will be squared on Fed Chair Jerome Powell’s speech and any hints he may provide on the path for interest rates. We also have the Fed’s favoured inflation measure, PCE Core, scheduled for release today, which has the potential to provide markets with some fresh directional impetus.

The USD has consolidated its recent gains ahead of Fed Chairman Powell's speech at the Jackson Hole symposium. The comments from Powell will likely determine how the USD responds later today and may determine the performance of the USD into next week. The EUR-USD is trading back below parity, while the GBP is trading only slightly above the 1.1800 mark. Fedspeak from Kansa City Fed President George overnight confirmed what we already knew and added little to the debate around whether the Fed would hike by 50bp or 75bp. At a minimum, whatever the outcome, it will keep pace with what the ECB and BoE are set to announce to keep the USD's support intact.

Africa: Health Ministers in Africa have agreed to an eight-year plan to improve the continent’s ability and readiness to respond to emergencies after the challenges caused by Covid-19. According to the World Health Organisation (WHO), around $4bn is needed each year to “fully fund core health-security capacities in the region and better prepare for the next pandemic.” WHO added that the new plan includes redirecting resources used to eradicate polio and deal with Covid-19 to reduce risks from other crises. This, together with additional international and domestic funding, will help 80% of nations obtain predictable and sustainable health-security financing. Other goals include countries responding to public health emergencies within 24 hours of detection and all nations having the bulk of their districts offering functional health-service delivery.

Ghana: The Bank of Ghana (BoG) is reportedly set to purchase as much as $500mn of foreign exchange directly from international mining and oil companies by the end of the year as authorities seek to shore up its reserves. According to sources close to the matter, the BoG raised more than $20mn within a week of announcing on August 17. Furthermore, it will “work collaboratively” with the natural-resource exporters to boost its foreign-currency holdings. While the BoG’s plan is not yet clear, central banks that buy foreign currency from exporters usually sterilize those flows by selling local-currency bonds in the market. Ghana is facing a shortage of dollars after it lost access to international markets, and the BoG has been looking for ways to boost its foreign-exchange holdings, which have fallen by more than 20% since the start of the year to $7.7bn in June and to support a weakening cedi.

Egypt: The Egyptian Cabinet reported yesterday that the economy grew by 6.6% in the previous fiscal year, 2021/22, compared to a growth rate of 3.3% in the prior year. The restaurants and hotels sector led the surge, expanding by 45% as tourism recovered after the coronavirus pandemic, with the communications sector growing by 16.3%. While the economy grew in the previous fiscal year, downside risks exist in the 2022/23 fiscal year following the negative repercussions of the war in Ukraine that hit the tourism sector and caused significant food price hikes.

Ethiopia: The International Monetary Fund said it will likely begin discussions with Ethiopian authorities for a potential program “this fall.” The IMF also welcomed progress by the creditor committee for Ethiopia’s debt restructuring under the G20 common framework. On Wednesday, the creditor committee said it was awaiting a program between Ethiopia and the IMF and recommitted to granting Ethiopia debt relief in the face of glacial progress.

Nigeria: Reflecting the rising cost of domestic debt amid continued monetary policy tightening by the central bank, yields on 12-month treasury bills in Nigeria surged to the highest level in 13 months. The Debt Management Office (DMO) sold a total of NGN283bn ($661mn) of the 364-day federal government bills at a discount rate of 8.5%, the highest since July 14 last year. The bills were sold at an auction by the DMO on Wednesday that cleared on Thursday. While real interest rates remain negative, the rising cost of domestic debt will likely place further pressure on public finances after debt service costs surpass revenues in the first four months of this year.

Nigeria: As part of new measures to curb crude oil theft, companies hired to protect oil pipelines in Nigeria will now be compelled to install surveillance equipment that detects losses in real-time. According to the head of Nigeria’s National Oil and Gas Excellence Centre, security firms will have to fit technology that senses when pipelines and other production facilities are being tampered with if they want to win contracts. Authorities in Nigeria are under pressure to stem rampant crude theft from the country’s onshore pipelines. The government blames the criminality for the country’s dwindling output that has left Nigeria unable to meet its OPEC quota or benefit from higher-than-normal oil prices.

The latest data from ZamStats showed that headline inflation in Zambia edged lower in August, coming in at 9.8% from 9.9% in July. On a month-on-month basis, consumer prices dropped by 0.3% in August. Easing food costs were a major driver of the slower pace of price growth in the economy in August. Specifically, annual food-price growth slowed to 11.3% from 12% in July. Meanwhile, non-food inflation accelerated to 7.8% from 7.2%. 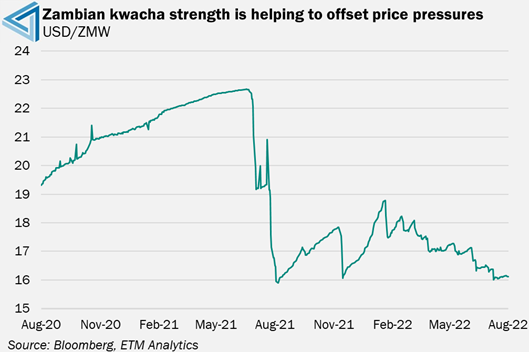 A firmer kwacha also helped limit price pressure in August. The kwacha has gained more than 1.5% month-to-date against the USD amid improved sentiment after bilateral creditors agreed at the end of July to provide financing assurances that Zambia needs to secure final International Monetary Fund (IMF) approval for a $1.3bn bailout. Since the start of the year, the kwacha has gained over 3% against the USD, ranking it among the best performing African. The kwacha has firmed on the back of factors such as improved liquidity conditions due to central bank intervention in the FX market, a recovery in foreign portfolio flows into the economy, and improved sentiment towards Zambia as it nears final approval from the IMF.

While liquidity in Zambia has improved, allowing the central bank to support kwacha, there are, however, some risks. Tightening global financial conditions pose a downside risk to foreign portfolio flows for Zambia and many other EMs. Furthermore, with economic activities picking up and global commodity prices still elevated, Zambia’s import bill is rising, and this could weigh on the import cover. A declining import cover could limit the room the central bank has to support the market.

Kenya remains in the spotlight, with traders and rating agencies trying to assess the fiscal and macroeconomic outlook for the country under the newly elected president. Global credit rating agency Fitch published a report yesterday highlighting concerns over the government’s planned fiscal consolidation measures. The agency stated that the president’s party lacks a majority in parliament, which may impede the government’s efforts to implement its agenda. 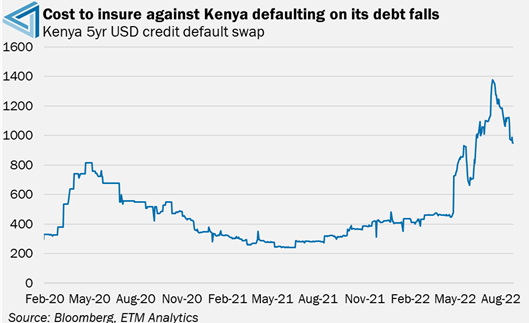 Fitch also flagged the possibility of another election if the election outcome challenge filed by Raila Odinga’s Azimio La Umoja coalition is successful. While fiscal and political risks are elevated, improving public-debt sustainability has been a priority across the political spectrum in response to rising government debt/GDP. Kenya currently has an Extended Credit Facility and Extended Fund Facility arrangements with the IMF that seek to address debt vulnerabilities.

The global rating agency said in its report that Kenya has made progress on its structural reform commitments under the arrangements. Fitch added that higher tax inflows would help to reduce Kenya’s interest expense as a share of revenue, which its estimates is around 28% in the current fiscal year, well above the median for similarly rated sovereigns of 12%. Fitch affirmed Kenya’s B+ rating in March with a negative outlook, reflecting uncertainty about planned fiscal consolidation and risks to economic growth. While fiscal concerns remain elevated, it is worth noting that Kenyan Eurobonds have traded in line with their African peers in recent sessions. Moreover, Kenya’s 5yr USD credit default swap, the cost of insuring against sovereign default, fell to more than a 2-month low on Thursday, suggesting that fiscal and political concerns in the market are easing.

In line with expectations, the central bank of Botswana (BoB) hiked its benchmark interest rate by 50bps to 2.65%. The decision to hike rates comes as inflation continues to rise. For context, headline inflation accelerated from 12.7% y/y in June to 14.3% in July, which is well above the bank's medium-term objective range of 3-6%. Currency weakness has compounded external inflation pressures in recent months. The bank noted that the Standing Deposit Facility (SDF) Rate now sits at 1.65% and the Standing Credit Facility (SCF) Rate at 3.65%. The 50bps hike provided support for the pula yesterday, which ended the session more than 0.50% firmer against the USD. 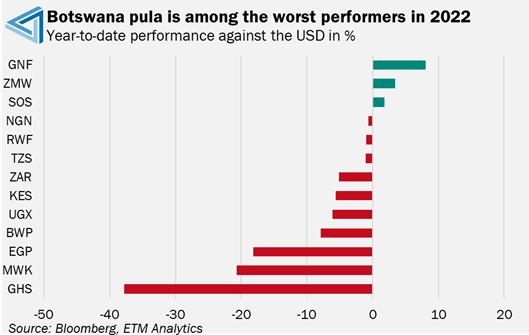 Projections are for inflation to remain above the objective range in the medium term. However, the BoB said that inflation would likely ease from the fourth quarter of 2022 as the high base effects come into play. The risk to the inflation outlook remains skewed firmly to the upside, particularly if international commodity prices increase beyond the current forecasts due to persistent supply chain and logistical constraints. The biggest drivers of external price pressures are the ongoing war between Russia and Ukraine and the rising tensions between China and Taiwan.

On the growth front, the MPC acknowledged the growth-enhancing economic transformation reforms and supportive macroeconomic policies currently being implemented. These include easy access to credit at a modest relative cost, improvements in water and electricity supply, further reforms to improve the business environment, government interventions against COVID-19, and an effective vaccination rollout programme. The central bank said the improved economic outlook would add to domestic inflation pressures in the months ahead, suggesting that the bank will tighten policy further.