Fitch downgrades Ghana to one level above default

Macro: China released both its PPI and CPI readings for November this morning and while the rest of the world grapples with the inflation monster, China has a problem of falling inflation on the CPI leg and deflation on the PPI leg. Factory gate prices fell by -1.3% in November on a year-on-year basis which has better than the market had expected, with the Bloomberg consensus predicting -1.5% y/y. On the consumer side, inflation eased to 1.6% from October’s 2.1% year-on-year reading, while core inflation which strips out food and energy prices was unchanged at 0.6%. Consumer sentiment and spending capacity have been severely constrained by the COVID lockdowns, however, there is some light at the end of the tunnel as Beijing softens some of the hard lockdown regulations. The weaker inflation numbers equally give the People’s Bank of China an opportunity to provide more stimulus to the ailing economy.

Fixed income: US Treasuries ended yesterday marginally weaker but are rebounding this morning in what has been a period of low liquidity. Despite yesterday’s losses, the general trend has been bullish for Treasuries since the start of November, sending yields down to lows not seen since September. The 2yr tenor is trading back below 4.300% while the 10yr benchmark is back around 3.450%. The bullish bias for USTs has helped to support equity and other markets owing to reduced bets on Fed hiking, but the warning signals that the bond market is flashing should not be ignored. Unsurprisingly, given the current concerns over the economic outlook, the yield curve continued to invert with the 2v10 spread currently trading around -83bp, pointing to a potentially deep recession.

Commodities: Oil is poised for a weekly drop of more than 10% as concerns over the global economic outlook have outweighed optimism regarding China’s reopening and the EU’s sanctions on Russian crude. Brent is trading near $76.75 per barrel, while WTI for January delivery is near $72.25 per barrel. The US benchmark briefly surged to over $75 yesterday amid news that the Keystone pipeline in the US was shut due to a spill, but the gains were quickly reversed as traders assessed that the outage would not last long. An outage at such a major pipeline will be a drag on already low inventory levels, but a quick resumption of flows is expected to leave very little impact on the general consumer.

Ghana: Finance Minister Ken Ofori-Atta on Thursday survived a motion to remove him from office after ruling-party lawmakers walked out before the vote. Minority lawmakers voted in favour of Ofori-Atta’s removal in a secret ballot Thursday, but the censure motion required two-thirds of lawmakers. According to the speaker of parliament, the vote in favour of the censure motion garnered 136 ballots, falling short of the minimum required. The motion’s failure paves the way for Ofori-Atta to continue leading talks with the IMF, which is on a mission in Ghana with the goal of reaching a staff-level agreement this month.

Nigeria: Nigerian lawmakers have asked the central bank to suspend its new order limiting cash withdrawals from automatic teller machines to $45 a day. The lawmakers also summed governor Godwin Emefiele to appear before the lower chamber of the national assembly before December 15 to clarify the new rules as well as the bank’s decision to redesign higher denomination of the local currency. This week, the central bank also capped the maximum customer withdrawal from ATMs at NGN 20,000 a day, down from the previous limit of NGN 150,000. Weekly cash withdrawals from banks were restricted to NGN 100,000 for individuals and NGN 500,000 for corporations, and any amount above that limit will attract a fee of 5% and 10%, respectively. The new rules are aimed at boosting digital payments in Nigeria, but lawmakers have described them as harsh and sudden.

Egypt: Finance Minister Mohammed Maait has indicated that Egypt is seeking to offer sustainability bonds for the first time at a value of $500mn in H1 2023. The sustainability bonds are aimed at financing projects with environmental or social impact and will further diversify Egypt’s financing sources given the current global challenges. During the current fiscal year, Egypt aims to issue sovereign Sukuk at a value of $1.5-$2.5bn, in addition to issuing green bonds, green bonds denominated in yuan, and development bonds.

Egypt: BP has signed a memorandum of understanding with the Egyptian government to explore the potential for establishing a new green hydrogen production facility. Under the memorandum of understanding, BP will conduct several studies to evaluate the technical and commercial feasibility of developing a multi-phase, large-scale green hydrogen export hub in Egypt. Furthermore, high-potential locations across Egypt will be considered as part of the feasibility studies.

Africa: The latest International Air Transport Association forecast estimates that African airlines are set to record losses of $638mn this year, narrowing to a loss of $213mn in 2023. According to IATA, Africa is particularly exposed to macroeconomic headwinds, which have increased the vulnerability of several economies and rendered connectivity more complex. On the global front, IATA forecasts a return to profitability for the global airline industry in 2023 as airlines continue to cut losses stemming from the effects of the coronavirus pandemic.

Namibia: Following the conclusion of the Article IV consultation with Namibia, the International Monetary Fund forecast the economy to expand by 3% this year and 3.2% in 2023, supported by robust diamond, gold, and uranium production and a gradual recovery in tourism in manufacturing. Meanwhile, the current account deficit is expected to remain significant this year, reflecting higher international food and fuel prices, a sharp decline in SACU receipts, and large FDI-financed imports in oil and gas. The fiscal deficit is expected to narrow in FY22/23, supported by fiscal consolidation measures to mobilize additional revenues and increase spending efficiency. That said, deteriorating global conditions could adversely impact Namibia’s short-term outlook and worsen external and fiscal balances.

Kenya: In its latest Kenya Economic Update, the World Bank expects poverty levels in Kenya to resume their pre-coronavirus pandemic decline as the economy continues to rebound. According to the lender, the proportion of the population living on less than $2.15 a day is projected to fall to 25.8% this year from 26.7% in 2021. That would be lower than the 26.5% recorded in 2019 before the onset of the pandemic. The lender warned that consumption growth is likely to be dampened in the near term due to below-average harvests, higher inflation, and tighter monetary policy. Meanwhile, the World Bank forecasts Kenya’s economy to grow 5.5% this year and by an average of 5.2% over the next two years as private investment increases. That’s unchanged from a prior forecast in June. 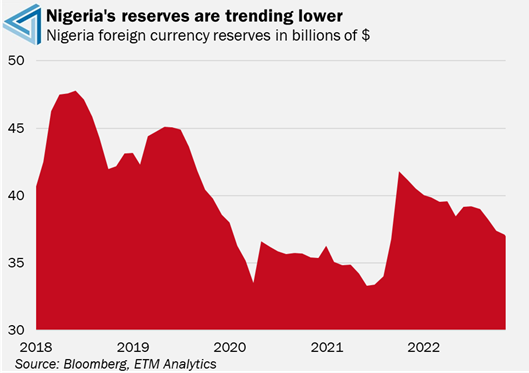 Several factors have detracted from Nigeria’s foreign currency exchange reserves this year. Given Nigeria’s foreign exchange reserves are primarily funded from export proceeds from the sale of oil and gas proceeds, lower oil production and crude oil theft have meant Nigeria has been unable to capitalize on the higher-than-budget oil prices. Continuous foreign exchange interventions by the CBN to support the naira have also weighed on reserves, while tighter global financial conditions have made external borrowing expensive.

While low oil production has been the biggest detractor to Nigeria’s foreign currency reserves, it is worth noting that oil production in Nigeria is starting to recover as measures put in place to deal with oil theft take effect. The NNPC has reported that Nigeria raised production to 1.59mn barrels/day as of December 6, with the increase in output largely on the back of the collaboration between the NNPC and private contractors employed to tackle crude theft. Improved oil production could result in more foreign exchange inflows and translate into higher foreign exchange reserves going forward.

Fixed Income: Fitch downgrades Ghana’s credit rating on the back of the debt exchange announcement

Global ratings agency Fitch downgraded Ghana’s sovereign credit rating to C from CC previously. Note that Fitch typically does not assign outlooks to sovereigns with a rating of CCC+ or below. Fitch said that the downgrade follows the government's announcement of a formal invitation to exchange local-currency debt, which the agency deems to be the initiation of a default-like process. 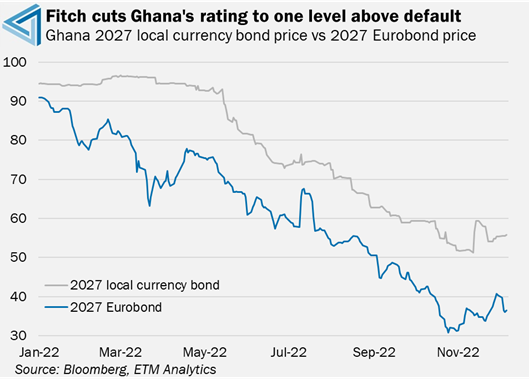 Fitch said that the completion of the proposed local-currency debt exchange would lead to a downgrade of Ghana's rating to default. The agency highlighted that the new bonds will pay significantly lower coupons, with 0% coupons in 2023, rising to 5% in 2024 and 10% from 2025 onwards, and effectively extending maturities for eligible outstanding local-currency domestic debt. According to Fitch, the restructuring comes in the context of efforts to secure IMF support, and a local-currency restructuring seems to constitute a necessary prior action.

While the Ghanaian cedi has staged a notable recovery this week, it has been a mixed performance for bonds. Shorter-dated local currency bonds have come under considerable selling pressure, while bonds on the belly and long end of the curve have strengthened. Ghanaian Eurobonds, on the other hand, have come under notable selling pressure, with the 2027 Eurobond price, for instance, falling more than 9% on the week.

Macroeconomic: Headline inflation in Egypt surges to a near-5-year high in November 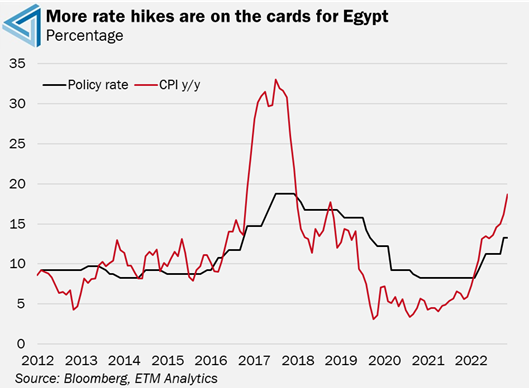 The statistics agency noted that the largest contributor to the rise in headline inflation was the food and beverage component. For context, food prices were up 29.9% y/y in November vs 23.8% as the Egyptian pound's weakness dramatically drove up the cost of imported food prices. The latest inflation figures give a glimpse into how the Egyptian pound's second devaluation this year has added to the strain on household budgets and businesses within the country. The devaluation did however help the country secure a $3 billion loan from the IMF, which eased fiscal pressures.

Against the backdrop of surging inflation and de-anchored inflation expectations, the Central Bank of Egypt has raised interest rates aggressively this year and will likely have to deliver even more in 2023 if inflation continues to run. Policymakers have raised the Deposit Rate by 500bps this year, taking it back to pre-pandemic levels at 13.50%. Reports have surfaced that authorities may announce a new inflation target due to global shocks and devaluations, which have shifted the outlook. A new inflation target may take some pressure off the central bank and could potentially change the expected policy-rate trajectory next year.